The Dynamic 35: Manchester and London

“While we have this euphoria it’s pretty hard to imagine the bubble breaking. But look at the data and you think this thing could go…” (Grantham, GMO, Dec 2020).

“In every portfolio, you need to ask yourself what is going to be more relevant [in] five to 10 years versus today. The most interesting trend is that technology…it’s coming everywhere, its the future of every sector.” (Laffont, Coatue, 2018).

My latest addition to the ranks of Dynamic 35 list of listed funds is called Manchester and London Investment Trust. I’ll admit from the getgo that this main market fund is a tad idiosyncratic. It’s in effect a family investment vehicle for the manager – Mark Sheppard – and his family holdings. It invests in very mainstream growth stocks with an obvious tech focus but a few of its holdings can seem a little strange and include options designed to generate an income. It invests in other funds and exchange traded funds but its core holdings are very concentrated on a top ten of well known large cap stocks. And, in truth, its performance hasn’t been as good as some of its more popular peers such as Scottish Mortgage which shares some – though by no means all – of the same investments.

But each of these idiosyncrasies has its upside. That family interest means that the manager’s interests are highly aligned with those of the investors. Sheppard has over £100m of his own skin in the game. Those options are also useful as a way of generating income in a sector usually devoid of dividends. And the use of other funds is a smart way of buying exposure to broader themes and sectors that can’t always be captured by a single stock. Lastly that under performance versus Scottish Mortgage looks a bit better when you compare Manchester and London with broader, global equity funds such as witan and Alliance Trust. Crucially I think that the broad-brush allocations in the fund are probably about right now. In simple terms, if you want a simple, low-cost vehicle that takes active decisions about stock selection but is heavily focused on three clusters – the FAANGs, Chinese tech stocks and the Microsoft/Salesforce showdown – this is your fund.

I’ve been a little unfair pitching Manchester and London against its nearest obvious peer Scottish Mortgage. As you can see from the table below – based on data from fund researchers at Numis – MNL has scored some perfectly credible numbers, just that Scottish Mortgage has had an amazing few year.

For 2020 calendar year the total share price return is 18.1 per cent while the 5 year annualised Share Price Total return is 24.2 per cent. Scottish Mortgage has done better but its also fair to say that a large bit of its returns in recent outperformance has come from a big bet on Tesla – a successful one – and a growing book of private equity investments. MNL has no private equity investments – all its holdings are publicly listed – and has no investment in Tesla. If I’m being brutally honest, I’d also say that Manchester and London ahs had an unimpressive last quarter but that is in part because its Is in part heavily invested in Chinese tech businesses which have had a tough last few months following the Ant Financials aborted IPO. I don’t know for a fact, but I also suspect that some of those options positions might also have hindered performance.

Crucially when one compares Manchester and London against other more conventional global equity peers such as Witan – another Dynamic 35 fund – and Alliance Trust, the funds performance is more than credible.

The two tables below show share price and net asset value returns for a broad range of global equity funds.

The table below lists the major holdings in the fund. One number stands out – the top 10 individual stocks in the fund (excluding funds) amounts to 86% of the value of the fund, while the top five individual stocks are at around 60%. So, this is a very concentrated set of large cap holdings.

Another way of looking at the fund is that it invests in four big buckets or allocations:

Despite poor performance in recent months, my sense is that this is an interesting mix. It’s well positioned in my view: there’s a strong global disruptor platform of FAANGs, plus a sensible and heavy focus on China Tech. I also like the heavy focus on enterprise software via Microsoft and Salesforce, both of which I personally I own in my own portfolios. 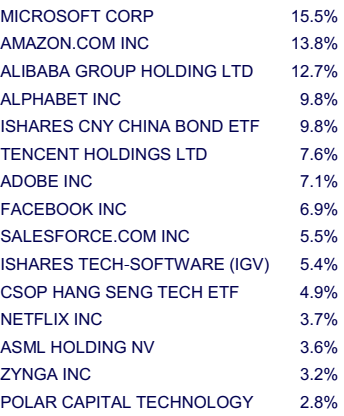 In style terms, you are obviously buying into a global, mega large cap concentrated portfolio of growth stocks, with a clear technology focus. According to the latest fund fact sheet, the see through price to earnings ratio for the portfolio is around 32, which is expensive but not extravagantly so. This focus on mega large caps is explicit and well defended – in the last fund fact sheet they declare that they tend to avoid most small and mid cap growth stocks because “the vast majority of the stocks within the Nasdaq Small Cap Technology index do not pass through our Data Framework Model. To put it another way, we have remained disciplined to a formalised, logical, back-tested data model and we have not chased the multitude of exciting shiny new stories that have come to Nasdaq with negative earnings, negative cash flow and EV to Sales ratios greater than 20x. Stocks like Snowflake, MongoDB and Zoom may well be genuine first class disrupters but their valuations leave very little room for error.”

It is also worth noting that the manager can and does invest in non tech stocks when deemed appropriate. You will also see that the fund is invested in other funds – the manager uses exchange traded funds for instance to access particular themes that he can’t access via a single company. Overall these funds account for around 15% of the current portfolio. I also mentioned earlier that the fund invests in put and call options that generate options writing income which can be paid out as a dividend.

As I have already mentioned, the fund hasn’t had the best quarter of late and I suspect that its heavy exposure to China and Alibaba might have had some impact. In the last monthly fact sheet the manager observes that “Alibaba was subject to the commencement of an investigation into alleged monopolistic practices. This caused material volatility in the shares (and to wider Chinese Tech). Alibaba, Ant and Tencent face increasing regulatory scrutiny but we see these risks as largely in the price assuming that the Chinese govt continues to act rationally with their Tech champions.”. In terms of new additions, the fund increased its exposure to Dutch based ASML which provides horrendously expensive capital equipment to semiconductor makers.

In the section above mention was made of the stock selection framework used by the managers – their Data Framework Model. In a recent presentation to investors, the managers helpfully mapped out this screening process using a seven step approach.

In terms of the available universe of global stocks, the manager tends to focus on a number of what are called Investment Thematics. These include the following:

I think I have been very honest and detailed over the last few paragraphs that this fund is not without its risks. In no evident order I would repeat the following caveats:

Listing all these risks in the section above sounds a bit bleak but I think the positives outweigh these potential risks. I think there is a strong, continuing argument for suggesting that the tech enabled growth-orientated leviathans/platforms of today will continue to capture market share and improve cash flows as the global economy picks up speed again. I would not want to bet against the Faangs and especially not the Chinese tech giants. Also as I have also mentioned earlier, I think the big focus on Microsoft and Salesforce – both giants in the enterprise space – is a smart one.

You could of course buy some of these leviathans yourself, individually as stocks, but in reality, Manchester and London gives you a concentrated slug of stocks that are remaking this new global economic order. The same also holds true for peers such as Scottish Mortgage but this hugely successful Baillie Gifford fund also boasts a growing book of private equity style, private businesses. That has been a smart move but at some stage we could see the IPO pipeline become too congested while investors might start to gag at some of the valuations being pushed by as yet unprofitable businesses.

So, in sum, I think the Manchester and London fund is a very active bet on a handful of big tech stocks, from the US and China, that could continue to massively outperform in any economic recovery. As a fund, its absolutely not without its risks but I like the concentrated holdings in its portfolio. I also think the personal alignment of the manager with the fund – that huge holding – offers some downside protection.