Having prospected for investments in the soft drinks industry, I think Nichols is perhaps the most intriguing of quite an interesting group.

It has been enormously profitable and a steady grower, unlike the other candidate, Fever-Tree, which has experienced both extraordinary profit and extraordinary growth.

Fever-Tree makes me nervous. Explosive growers rarely keep growing rapidly and I do not know how to determine whether they will. Invariably they must, to justify heightened share prices.

According to SharePad, relatively slowly growing Nichols is valued at little more than ten times current earnings and nearly thirty times forecast earnings, the forecast is based on estimates of a 50% decline in profit.

Fever-Tree is valued at between 35 and 45 times current earnings, depending on the measure, and 67 times forecast earnings, based on estimates of a 30% decline in profit.

Clearly, both companies have been adversely affected by the pandemic, which is not surprising considering they both sell to the hospitality industry.

But if we take the view that in future the earning power of these companies will reassert itself, then I can see there may be value in quiet achiever Nichols.

I am also encouraged by the continuing involvement of the Nichols family, because families are often good stewards, keen to build on the legacy they received and pass it on to future generations.

The family owns nearly 35% of the shares, and in July it secured the right to nominate two non-executive directors to the board while the family’s holding is greater than 30%.

It already had one director on the board, non-executive chairman John Nichols who is the grandson of the company’s founder. He has been joined as a non-executive director by his son James Nichols, who has worked in the business for 16 years.

My last article finished with the observation that Nichols, which earns much of its revenue from the famous Vimto brand, is less profitable than it used to be because it is investing more.

The point of investment is to generate more profit in future so temporarily depressed returns on capital are not necessarily a bad sign, but Nichols history tells a different story. 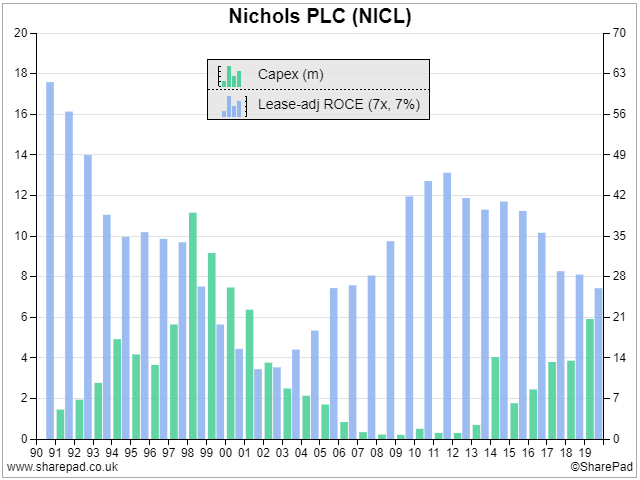 The fifteen year period from 1998 to 2013 is characterised by falling or low capital expenditure (green bars). It coincided with a slightly shorter period of sustained rises in return on capital employed (ROCE – blue bars) from 2002 to 2012.

Since then the pattern has gone into reverse, capex has been on the rise and returns are falling again (although at 25% plus in 2019, Nichols is a very healthy business).

There is probably a lot more going on, Nichols invests a lot on advertising Vimto, which is an operating cost, not a capital cost, but it looks as though far from generating returns, capital expenditure has had a negative impact on ROCE even if we extend the analysis over many years.

John Nichols had just orchestrated the transformation of the Dispense business, as it was known then, or Out of Home, as it is known now.

Previously, Nichols supplied the equipment required to dispense drinks in pubs and restaurants, but it had switched to using distributors who shouldered the cost instead.

Nichols had been recruiting distributors for a number of years and had also sold part of the Dispense operation, Balmoral, a supplier of coffee machines and consumables in 2006.

The restructuring of Dispense followed a strategic review conducted in 2003, which resulted in the sale of a food business, and the closure of Vimto’s soft drinks factory in Manchester.

Nichols had rid itself of products other than soft drinks, and had outsourced many aspects of making, packaging and distributing them.

It had become a marketer of syrup (the manufacture and packaging of which it outsourced), advertising directly to the public, and selling to grocers, cash and carries, wholesalers (aka the “Soft Drinks” business), and distributors to pubs, restaurants and caterers (aka the Dispense/Out of Home operation).

Its new mantra was focus, and focus reduced the capital required to run the business, and improved returns.

In 2007 Nichols made most of its revenue from the Soft Drinks business, as it does today, but I am going to be spending most of this article talking about Out of Home because it may be driving the swings in profitability.

This chart shows what Nichols has spent its capital on since its metamorphosis in 2007: 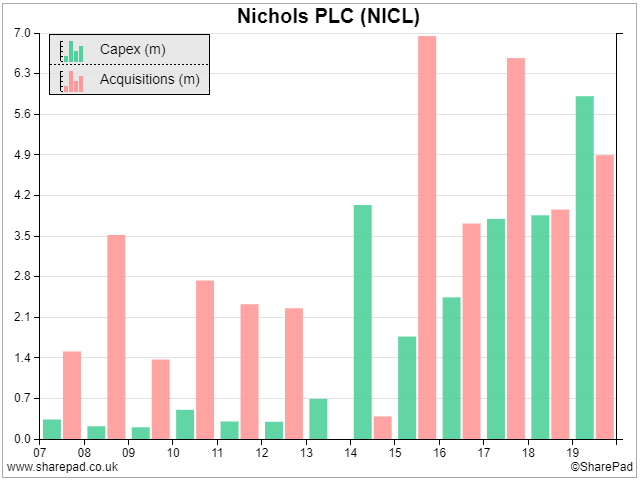 During the initial years of low capital expenditure Nichols was mostly buying more products and customers to sell to its distributors. It is the third largest supplier to the Out of Home market after Coca-Cola European Partners and Britvic (which sells Pepsi), and it cemented its position by buying the fourth largest supplier in 2010.

Then it entered the premium juice market in 2011, through the acquisition of Dayla. Dayla came with a factory in Ross-on-Wye, which packaged syrup and juice for the Out of Home market.

This factory has been a significant recipient of capital expenditure in subsequent years as Nichols has modernised and upgraded it to fulfill its growing ambitions.

These took another leap forward in 2016, when the company acquired Noisy Drinks, a supplier of frozen drinks, partnered with a frozen drinks brand in 2017, and bought one of its frozen drink distributors in 2018. Frozen drinks require refrigeration, which has also been a major capital expenditure item in recent years.

As an outsider looking in, it appears that Nichols is being sucked back into capital intensive activities in manufacturing and distribution, requiring investment in factories, warehouses and dispensing equipment.

It may also be losing focus.

Nichols has four strategic priorities, “More from the Core” implies focus, but “Whenever, Wherever” requires diversification. The company’s other priorities are innovation and sustainability.

I must admit having seen the returns from focus, I am wondering about the wisdom of diversification.

And what of the future?

By vertically integrating, doing more manufacturing and distributing, Nichols may think it can capture more of the profit from Out of Home consumption, while at the same time being more efficient, but frustratingly it does not really make the case in its annual reports.

Meanwhile the pandemic has prompted a bit of a rethink.

Sales through the Soft Drinks business have grown in the nine months to September 2020, but Nichols earned 45% less revenue from the locked down Out of Home market than it did during the same nine months in 2019, reducing total revenue by 16.5%.

It has adopted the mantra “Build Back Better” as it restructures, making some redundancies and “realigning” investment for 2021.

It is hard to believe that the brunt of the realignment will not be experienced by the Out of Home division and it may be expedited by changes at board level.

Chief executive of seven years, Marnie Millard, is leaving at the end of this year. Her tenure corresponds with the latest phase of higher capital spending.

The new chief executive is Andrew Milne, who was originally appointed as commercial director for Vimto Soft Drinks in 2013. He joined the board as chief operating officer in 2016.

The company’s chief financial officer left after 15 years in February and was replaced by David Rattigan, an external appointment.