Traditionally most investors tend to regard the division between developed markets (DM) and emerging markets (EM) as a simple divide. We all put more money in the DM but then try and make sure we have some, smaller exposure, to the broad gaggle of national markets which represents the developing world or EM for short.

But that second, junior, asset class increasingly looks broken as a single category or asset class. Emerging markets cover everything from tiny Qatar through to leviathan China. In truth it isn’t one homogenous asset class and is largely irrelevant in my view as a single asset class. As I discussed in my last Dynamic 35 addition – for India – the global EM indices are now largely dominated by China and the surrounding Asian regional economy (which is now collectively part of a new free trade area). Depending on your EM index, the tightly bound economies of China, Hong Kong, Taiwan and South Korea, now account for anything between 60 and 70% of most EM indices and funds. The other BRIC economies are ‘also rans’.

This doesn’t make sense to me. I think we should all collectively stop using the term EM to include the Greater China economy, and accept that this Asian block needs its own third way designation – between EM and DM. I would include Japan – a developed world market – in this regional grouping because its economy is so closely tied to China.

Stepping back from this analysis, I think that all investors need to work out whether they want Greater China/Asia block exposure or not. Once they’ve made that decision they can then work out what they want to allocate to the rest of Global EM space excluding Greater China i.e India, Brazil, Russia, E Europe and increasingly MENA (middle east and Africa).

My feeling is that ignoring the Greater China/Asia Block is foolish. For me, the big question is whether you want exposure to China or not. The whole region is now increasingly dependent on the huge economic changes in the communist dictatorship and their inevitable impact on the rest of us. The numbers are so huge, so well known, and so obvious, that they don’t need repeating. It would be like ignoring the rise of a new America in the 21st century.

If all this worries you, then avoid China and its regional linkages. If you can look beyond this then I think there is a sensible way of engaging with the rise of this huge regional Asia Block economy. Its through a very well-established Asian investment trust run by Schroders called the Asian Total return Investment Company. Before I look at the fund in a bit more detail, lets return to China.

I think this fund makes sense because I hope the west will find a way of compromising with China i.e living with it and investing in it. The most benign scenario was mapped out very clearly in a recent paper called Forecast 2025: China Adjusts Course from an outfit called the Macro Polo team based out of the Paulson Institute. I have not run into the latter before, but its blurb says “the Paulson Institute is a non-partisan, independent, privately funded “think and do tank” not supported by or connected to any government. It is dedicated to fostering a US-China relationship that serves to maintain global order in a rapidly evolving world. MacroPolo is the in-house think tank of the Paulson Institute in Chicago. We decode China’s economic arrival with our incisive, market-relevant analysis, and creative research products.”

The report maps out what I think is a very likely scenario based around a number of key macro assumptions, notably:

Here’s the reports base cases, all fairly optimistic …From an investor’s point of view they’re all food for thought, forcing us to figure out how we engage with local businesses.

If all this sound sensible – and I think it is – then engaging and investing in the Greater China economy makes sense.

This is where the £420m Schroders investment fund comes in. Its managers, King Fuei Lee and Robin Parbrook, provide three very important overlays for an investor seeking Greater China/ Asia Block exposure. Unlike say an equivalent fund such as the BG China trust, the managers can range far and wide through Asia, including countries such as Vietnam or Australia if necessary. They are not forced to invest only in China and HK and they can make judgements about politics and governance. My only small observation here is that the managers cannot invest in Japan which I think is a pity.

The next overlay is that they can long and short a national market i.e they are not forced to be overly bullish. If they think mainstream Chinese equities are too ‘dangerous’, they can short them if necessary and protect capital. This ability to use derivatives is crucial. Last but by no means least the managers then use a bottom up process of stock picking to find the best stocks in their universe.

A recent note from funds analysts at Killik and Co added some useful detail to this fund management process, which I think sums it very nicely:

“The team use a three-stage investment process to construct a portfolio of 40-65 high conviction names and a derivative overlay to reduce risk. Step one involves stock idea generation: a proprietary quantitative screen focused on shareholder value creation is used alongside Schroders’ well-resourced team of analysts. Step two is a strategic overlay which uses long-term valuation metrics to forecast country returns. The final step is a tactical overlay which uses a proprietary model to analyse fundamental, valuation and technical indicators and produce short term trading signals. The tactical element of the process influences the derivative overlay (i.e. selling index futures or buying index puts) which aims to reduce systematic risk when markets are deemed susceptible to downside risks. Hedging is limited to a maximum of 50%.”

The risk with this three-stage process – country allocation, long/short overlay and then bottom up stock picking – is that plenty can go wrong. You might get the country selection right but then bugger up the stock picking or your derivatives hedges could blow up and claw back any increase in the value of the holdings.

But, to date, this approach seems to have worked brilliantly, and the fund has a great track record. For full disclosure, I own shares in this fund.

The two part table below is from the funds End October fund fact sheet and shows returns over various time frames, and overall I think you can easily see the outperformance – the ten year annualised share price return has been over 10%.

What about recent, Covid influenced returns ?

Year-to-date returns have extended this track record The portfolio did suffer a sharp pull-back in Q1 as most Asian countries went into some form of economic lockdown and markets globally braced for a highly uncertain period. However, the portfolio held up marginally better during this period and then performed strongly during the sharp recovery in markets seen in the following months.

According to the Killik note on the fund, the funds’ managers were very active in using derivatives in the earlier part of 2020, buying “put options (giving the option to sell assets at an agreed price) on the Hong Kong and Chinese markets [which] helped offset a small part of the negative returns during the sell-off. This hedging was then largely closed in late March when the team’s market indicators were signalling a strong long-term buying opportunity (the investment company also added gearing to the strategy at this point).”

What’s inside the current portfolio?

We will start with the key holdings, with information taken from that end October fact sheet. For me the key number is that the fund is 108% invested in equities. 108%? Why above 100%? The fund can use leverage (loans) to increase exposure and can also, presumably, use derivatives to amplify that positive exposure to equities. So, in simple terms, the fund is bullish and long equities.

That said the Killik note observes that “the team have started again look at adding back some portfolio protection via put options (and reduced the gearing level in the listed fund). The team have recently started to see evidence of froth in certain parts of the Asian markets, noticeably in some areas of the more speculative technology and biotechnology sectors. The managers have grown watchful on this heightened optimism spreading into parts of the portfolio and have been prudent in trimming profits in certain areas.”

Next up we have the geographical breakdown. The key markets are as follows:

As you’d expect the Greater China quad (China, HK, Taiwan and South Korea) is running at about 80%, which is what I’d expect for a regional fund but notice the above benchmark holdings in Australia.

At the individual stock level, the table below has the current top ten holdings. Again, there aren’t too many surprises here – this is a portfolio focused more on Technology and Consumer brands although there are some cheaper financial names such as AIA and Ping An (financials are about 10%). 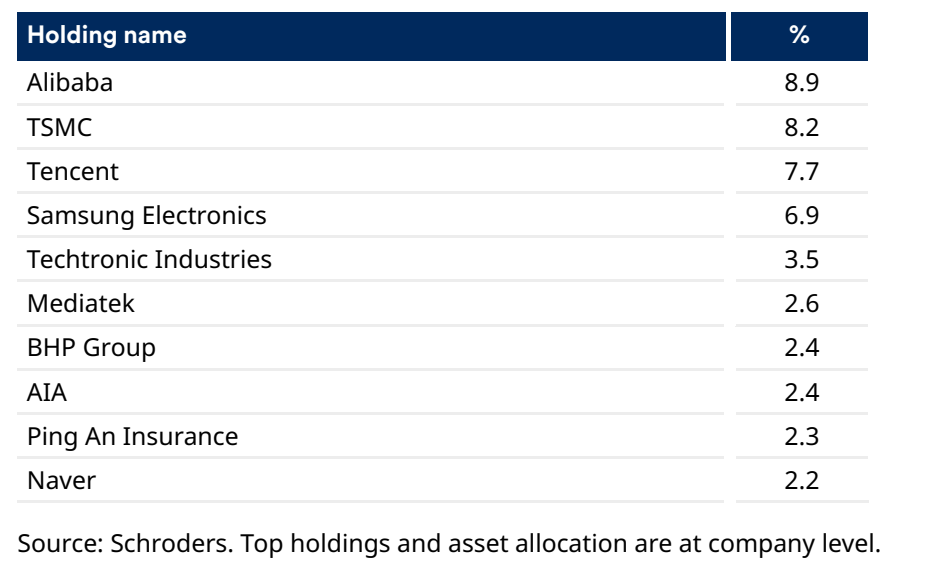 According to Killik’s, the fund managers are still “constructive on many parts of the sector. Anecdotal evidence from recent company meetings at a large (virtual) Asian technology conference showed clearly how trends such as 5G and the Internet of Things are accelerating the growth outlook for these businesses in Asia at the current time.”

I think this fund remains a brilliant way of gaining exposure to the regionally integrated Greater China economy. The use of different overlays is incredibly useful and during times of market stress, this fund can outperform other highly regarded funds (such as the BG China Fund, the Templeton and Fidelity funds plus the superb First State stable of unit trusts) because of its focus on total returns. I think its focus on growth stocks makes sense in Greater China/Asia as it’s manager seek to exploit structural shifts within the economy, in areas such as healthcare, technology and the Asian consumer.

There are, of course, some obvious risks with this focus on large cap growth – stocks such as Alibaba and Tencent are very expensive on historic valuations and could fall very substantially if regulators keep interfering in their business models. But those growth prospects I keep alluding to are too obvious to ignore. Obviously, this fund would not work for an investor who is exceedingly nervous about corporate and political governance in China – in that case you should look for an EM fund which has significant exposure outside the Asian block. But if you do ignore China, and thus the wider Asian regional economy, be aware that you could be missing out on the growth story of the century.