Tech IPOs and direct listing are picking up, with names that seem ever more ridiculous.

A fifth IPO is China’s Ant Group (or Ant Financial) which was founded by Ja Ma in 2004, 5 years after he founded Ali Baba. The IPO is expected to value Ant at more than $200bn, dwarfing the 4 US stocks. A former colleague, Marc Rubinstein has written more about Ant Financial here: https://netinterest.substack.com/p/ant-financial-the-worlds-largest

At least Ant makes a profit, all four of the US companies are loss making. Palantir has reported losses of over half a billion for each of the last 2 years, despite being in business 17 years.

Investors are prepared to suspend disbelief for loss making tech businesses and continue funding them year after year because management can often tell a good “story”. Technology investing is about locking-in customers, network effects, recurring revenues, high margins, with a path to profitability just a year or two away. In tech there ought to be a weak relationship between the past track record and future prospects – after all that’s what makes technology unique – future technology should not resemble past technology. Venture Capitalists in Silicon Valley can be more patient than investors of quoted shares in public markets, in part because the VCs have already enjoyed huge gains by understanding that the future has been (and will continue to be) different from the past. Though European cities have tried to create start-up hubs, this virtuous circle aspect of Silicon Valley is hard to replicate – there just aren’t so many people in Europe who have succeeded with disruptive tech businesses, and who are then recycling their gains into the next round of disruptive tech businesses.

The US companies look to have timed their listings well, last week Salesforce.com reported Q2 results with the number of contracts worth more than $1m up +63% v the same quarter last year. Group revenue was up 29% in the quarter. There had been concern that companies would defer spending on large contracts, or that Salesforce would struggle to close large deals that relied on face-to-face meetings. The shares were up +30% over 2 days last week.

Closer to home this report will take a look at an AIM tech stock that reported losses for 14 consecutive years, before hitting it’s stride and ten bagging since 2015. It’s what I like to call a “Robert Graves stock”. 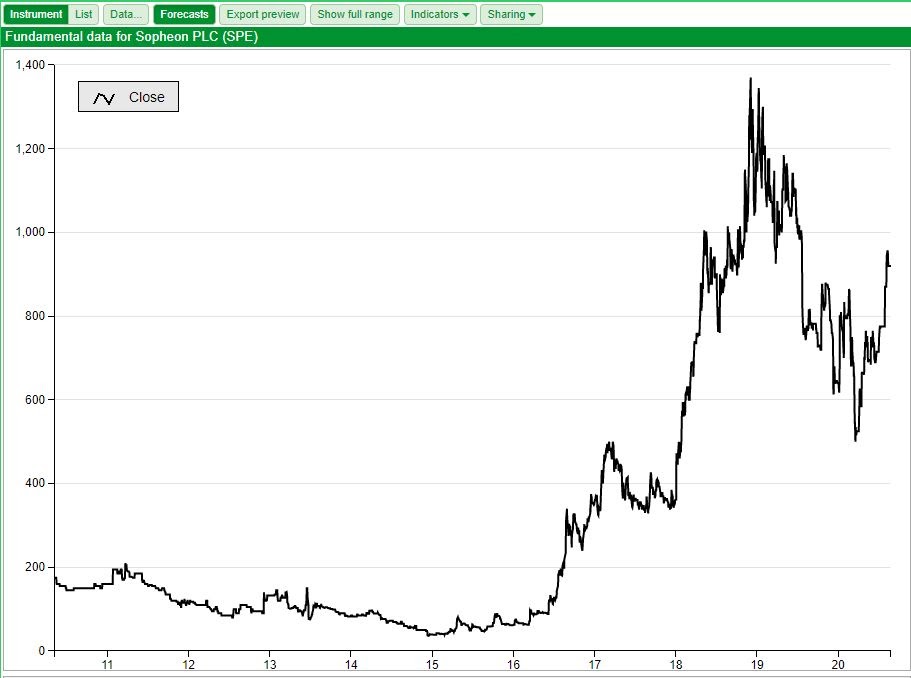 This is a software company that supports businesses to improve their Research & Development spend. “Accolade” the firm’s flagship product is an Enterprise Innovation Management (EIM) or more simply “Knowledge Management” system.

It’s pleasing to see a UK listed technology company enjoy success in the USA, revenues are split roughly two-thirds US, one-third Europe. Sopheon has an enviable list of blue chip clients across many sectors: from branded food Mondelez (owns Cadbury’s) and Hersheys to aerospace & defence companies like Lockheed Martin and Honeywell. The company lists some other impressive customers on its website here: https://www.sopheon.com/customers/

Software that helps manage innovation is similar to ERP software like SAP, innovation is the same process across very different organisations. As a former management consultant, my career started in “knowledge management” in the late 1990s. I can see the logic of software to support managing the innovation process, whether you are making chocolate biscuits or jet fighters, the project management, coordination and cross functional teamwork required probably is similar.

Sopheon is what I like to call a “Robert Graves stock”, named after the First World War poet, because a difficult early life can sometimes be an advantage. Graves was badly bullied at Charterhouse for being half German, then survived 4 years as a British Army Officer fighting in the trenches, wounded several times while many of his contemporaries were killed. He endured much adversity at a young age, but didn’t let the past stand in the way of future happiness, going on to be an accomplished author (Goodbye to All That and I, Claudius) and enjoying family life in Majorca, living to 90 years old. So, my definition of a “Robert Graves stock” is one that suffers a decade or more of losses early in its life, before going on to be a ten bagger.

Sopheon’s early history has seen shareholders (and management) endure a lot. The company started life as PolyDoc, in 1993 and was listed on AIM in 1996, before being renamed Sopheon and then merging with a competitor (Orbital) after the collapse of the first internet bubble. From 1999 the share price fell from a peak of 1762p to below 50p in 2015. Below is a chart of successive 5 year periods of cumulative PBT going back to 1994 – I’m really enjoying the feature of SharePad, that allows users to see the history going back decades. Between 1994 and 2007 the company reported 14 years of pre tax losses, cumulatively losing $70m. 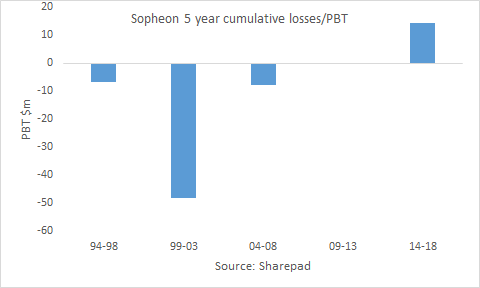 But then the company’s efforts started to pay off, winning new customers, revenue growing from $18m in 2014 to $34m in 2018. As the financials improved in the last few years, the shares have ten bagged to a peak of almost 1400p at the end of 2018. Following the H1 2020 results last Thursday, the shares are now trading at 860p.

There are a surprisingly large number of Robert Graves stocks like this which struggle for many years, but can see things really improve dramatically. Sadly for me I missed Sopheon, but did manage to buy both Sylvania Platinum and Creightons which fit this profile. Arcontech is another company like this that springs to mind, I’m sure there must be others. As long as you can time the purchase at roughly the same time performance starts improving these can be very rewarding shares to own.

Although RoCE has ranged from -11% in 2014 to +30% in 2016, the gross profit margin has remained constant at around 70%. Software businesses should have a high gross margin (direct costs are low, but indirect costs like sales and marketing tend to eat into returns). So the wide variation in RoCE comes in part from lumpy revenues, but also because increased spend on both Sales & Marketing and Research and Development occurs in financial periods before revenues and profits are generated. 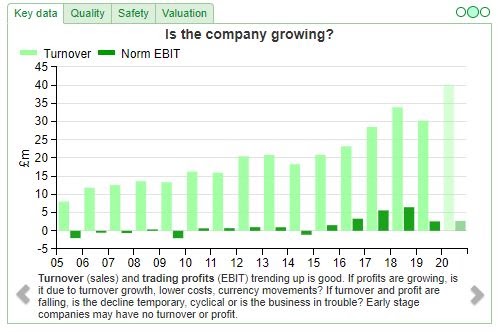 In FY 2019 revenue at Sopheon fell by 10% to $30m FY 19 and profits fell by two-thirds to $2.5m as management have shifted from a licence model (one off, lumpy revenue) to a smoother, recurring “Software as a Service” model. In the short term this suppresses revenue and profits, but should result in longer more stable client relationships and better earnings visibility. Management flagged this change to investors ahead of time, also noting that “unexpected client personnel changes, customer scope expanding from point to enterprise solution and ramp-up time of our newer sales resources” would hold back revenue in the short term.

Annual Recurring Revenue is now being targeted as a KPI by management, rising from a quarter of revenue in 2015 to half revenue last year. Only the SaaS offering is integrated into Microsoft Teams, which is one way that Sopheon is encouraging customers to migrate from licensing to SaaS.

This explains the eye catchingly high 60x PER ratio investors are prepared to pay: profits are temporarily suppressed as the switch to SaaS occurs, but should recover in a year or two.

Notable too that free cashflow exceeds profits for Sopheon, so revenue recognition policies are not suspect and the multiple falls to “only” 33x price/ free cashflow. Price to sales, at 6x is not cheap, but seems appropriate for a company with net cash, a large addressable market and that has reported a consistent gross margins at c. 70% and achieved RoCE of 30% in 2017.

The Executive Chairman, Barry Mence owns 2.2m shares, or 22% of the shares outstanding. He sits on the remuneration committee, but investors will be relieved to learn that he doesn’t set his own pay. As Exec Chairman he earned just over quarter of a million dollars, of which the bonus was just $38,000 in 2019, so his interests are aligned with shareholders.

The other large shareholder is Myrtledare Corp/Rivomore Limited which owns 24% of the shares outstanding. A google search revealed nothing on Rivomore, except that it was registered in the Isle of Man, with a British Virgin Islands address. I spoke to the broker (FinnCap) who said that Myrtledar/Rivomore were on friendly terms with the management, and have been long term holders. The lack of free float is rather an obstacle for other institutional fund managers though.

All this preamble brings us to the half year results which came out last Thursday.

The company withdrew guidance in May, understandably given the Corona upheaval, but the share price reaction on the day of results (down 7%) suggested that nonetheless H1 numbers disappointed versus investors’ expectations. Sopheon reported revenue up 1% to $13.9m but PBT down 44% to $479K, as the gross margin deteriorated to 67% (v 69% H1 19) and indirect costs (both Sales & Marketing plus Research & Development) increased. The company pointed to a traditional Q4 weighting because customers tend to make their decision to buy when they are close to the end of the year and know how much budget they have to spend. The experience of Salesforce reporting large contract wins +63% suggests that customers are prepared to commit to spending large amounts even without face-to-face meetings.

Nothing in the H1 2020 report implied that the strategy isn’t working, but instead that it is taking time. It makes sense that Sales & Marketing and R&D spend should precede revenue growth. Sopheon’s clients are not in areas that have been badly hit by covid, but no one is immune from secondary and tertiary effects of the virus. The company reported the cash pile growing to $22m, and no borrowing. That represents 19% of the market cap, and management have flagged a “more structured look at M&A opportunities”.

Aside from the cash, Sopheon also has $52m of income tax losses available to carry forward arising from historic losses in previous years. Prudently there is just $2.6m of deferred tax assets recognised on the balance sheet. Tax accounting is complicated, deferred tax assets can only be recognised in the jurisdiction that the losses were made, and also where future profits are likely to arise. It seems there is at least some potential for the deferred tax asset amount to rise. 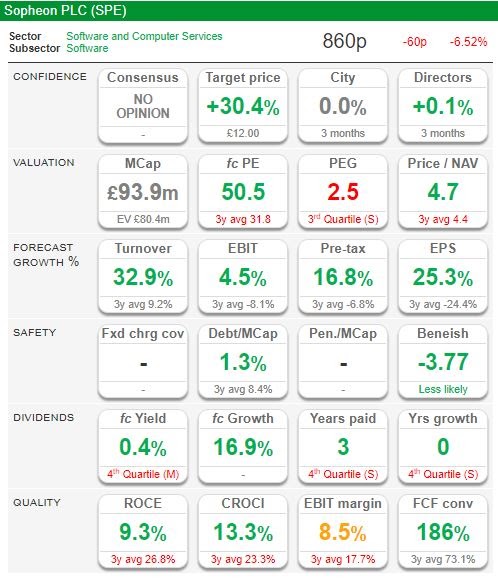 I did ask FinnCap why there were no forecasts available, and the broker replied that the company was reluctant to give guidance because customer buying behaviour was particularly hard to anticipate over the next few months. That said, the company does report $25.5m of revenue visibility for FY 2020 – that is roughly 85% of this year’s revenue is reasonably certain to come through, but this number does not include additional revenues from new sales opportunities expected to close during the remainder of 2020.

Sopheon looks like a good company, with a believable story.

The 60x earnings multiple for this share feels too rich given the uncertainty. Yet assuming that earnings do recover back to 65c reported in 2018, at 860p PER drops to 17x (or 14x 2018 free cash flow) – which gives some idea of the operational gearing inherent in the business.

In any case, a look into the company’s history could still prove valuable: in order to identify future ten baggers, it helps to have some knowledge of what has ten bagged in the past.

Investors may still be able to time a purchase in Sopheon as the benefits of increased marketing spend show up in revenue growth in following years. That may be in H2 or it may take until 2021 or later years.

My verdict: one to keep an eye on, but perhaps no need to buy now unless you have a higher conviction than management that H2 earnings will positively surprise.

Media often portrays #democracy as elections and votes. In reality it is institutions, the rule of law, independent media, power held to account, checks and balances. Eye opening article about China undermining all those things in #HongKong