UK banks – in the eye of the storm?

Every crisis presents opportunities. A contrarian strategy of buying bank shares during the point of maximum gloom during a recession has often, but not always, been a good idea. It most definitely failed in 2008 when banks needed to raise capital and had to rely on Government bail outs. But it has worked in previous recessions of the early 1990s, the Asian crisis 1997 and post Enron collapse 2002.

After many years of rebuilding capital, banks are clearly more resilient than the previous 2008 financial crisis and certainly are not experiencing the funding difficulties of 10 years ago as customer deposit growth (NatWest reported a £39bn +22% annualised increase in customer deposits in the last 6 months) is up sharply in this recession. As discussed later, the current discounts to book value suggest a good deal of bad news is already priced in.

In addition to the reported numbers, the analyst presentations and the questions bank management answer can also allow insight to wider trends, for instance the shift to digital transactions or customers on payment holidays (slide 20-21, Barclays Q2 presentation). This so called “voluntary disclosure” and narrative around the numbers is worth paying attention to for trends in the broader economy, consumer spending and other sectors, such as property companies and REITs, estate agents, retail, travel, restaurants and pubs. 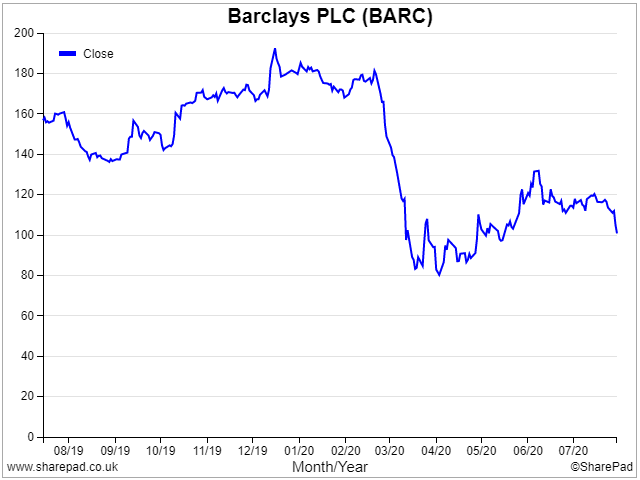 Barclays reported 29th July with revenue £11.6bn rising by 8% versus H1 last year, and credit impairments 2.07% of average loans. These numbers masked significant divergence in the group’s divisions, with the capital markets business (Fixed Income Currency & Commodities) reporting income up a very strong 83%. Unprecedented Central Bank and Government liquidity support have kept financial markets buoyant have benefited Barclays in the first half of the year.

But the cards and payments business reported revenue down 21% on the previous year. Impairments trebled to £1.3bn in the Consumer, Cards and Payments business, which reported a divisional loss of £614m. Barclays blamed falling card revenue on consumers reducing spending on their credit cards and therefore lower card balances. Defaults are harder to gauge at this point because the bank has granted payment holidays on 121,000 UK mortgages (10% of the portfolio by value) and 157,000 credit cards (5% of the portfolio by value).

As an aside, it is rather dismaying to see that the Barclays Chief Executive rewarded for profits excluding Litigation and Conduct fines (page 104 of the Annual Report). These are costs paid by shareholders, over which investors have far less control that management. It is also rather worrying from a shareholder perspective that these costs seem to recur every year, almost as a cost of doing business in the banking sector. Given that management incentives at Barclays do not include these L&C costs, it seems likely that they will continue to recur.

In the outlook statement management suggest that revenue in the cards business should begin to recover, and that group bad debts should not rise from the levels reported in H1. A pick up in consumer spending in the second half would benefit stocks like JD Wetherspoons (961p, Mkt Cap £1,157m or smaller rivals such as Revolution Bars (16p, Mkt Cap £20m) and Loungers (129p, Mkt Cap 131m), perhaps also supported by the Government’s “Eat Out to Help Out” discount scheme. 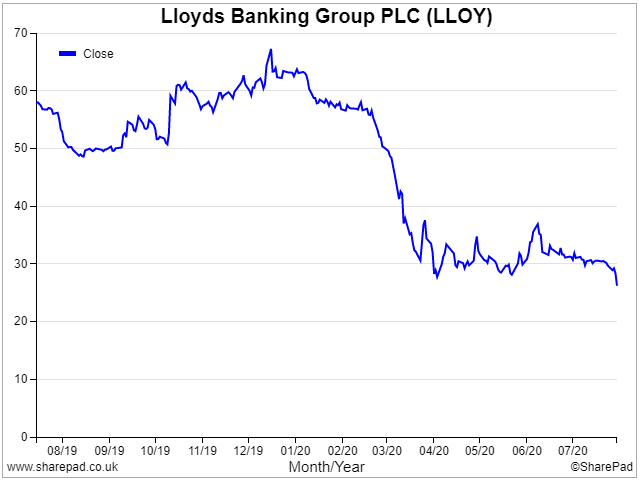 Profits in the Retail Bank fell 90%, as revenue fell 10% and impairment charge up 4x to £2.1bn. Unfortunately Lloyds failed to benefit from diversified universal banking model, because the Insurance and Wealth (the old Scottish Widows business) division saw revenue fall 29% and underlying profits down 42%.

The shares opened sharply down and were trading 7.5% lower following the conference call as analysts questioned how the bank would achieve returns above cost of equity, if the bank’s guidance for the 2020 Full Year Net Interest Margin of 2.40% failed to improve in future years.

Antonio Horta Osario the Chief Executive has announced he will be stepping down next year. Although touted as a talented individual there has been some controversy over the size of his rewards in the past. Investors in Lloyds shares may be rather disappointed that the Chief Executive’s long term incentive has paid out on average 70% of maximum opportunity and he has been paid £56m in single figure remuneration since he joined the bank in 2011 and in addition has been rewarded with over 40m shares. Yet the share price has drifted up from below 50p to back down to below 30p today. Even before the stockmarket started falling due Covid concerns, Lloyds shares were back where they were in 2013 despite the Chief Executive mostly hitting his targets. This implies that management incentives were not well aligned with share price performance over the last 7 years. The whole idea of Long Term Incentives is to link rewards to the company’s performance over the longer term.

Lloyds, which is a third of the UK mortgage market made encouraging noises about activity in the UK housing market picking up following the end of lockdown. Royal Bank with a market share of 10.5% also talked about a recover and gaining market share in this area. Smaller cap estate agents that reported in early August such as M Winkworth (146p, Mkt Cap £18m) and Purplebricks (60p, 186p) which has been badly hit but whose share prices are beginning to recover, helped not just by the availability of bank finance but also the Chancellor’s change of stamp duty threshold from £125,000 to £500,000 until 31 March 2021. Interestingly Purplebricks Senior Independent Non-Exec Director Simon Downing purchased 500,000 shares at a price of 57.5p per share on 6 August 2020.

Also ULS Technology (62p, £40m Market Cap) the online conveyancing company (which I own and have recently increased my position in) should benefit from this trend.

NatWest (the bank formerly known as Royal Bank of Scotland) 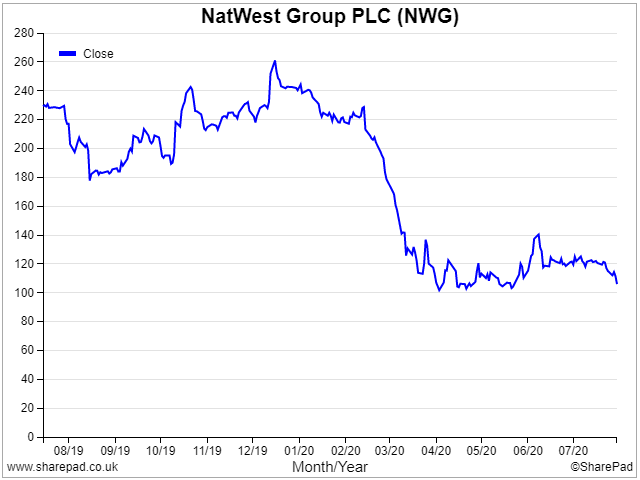 NatWest reported 31st July, with revenue down 18% to £5.8bn in H1 and a loss of £770m on a statutory basis. Excluding the one off benefit of a Middle Eastern bank disposal last year, revenue would have been down 5% on an underlying basis.

The comparisons versus half year 2019 were also buoyed by a helpful release of a £250m Payment Protection Mis-Selling provision as complaints were lower than previously predicted. Absent this, and the statutory loss in the first half would have been over a billion pounds. Similar to Barclays, there were diverging trends with the retail and commercial businesses falling 9%, while NatWest Markets was up 44% on an underlying basis. Despite this strong markets performance, the NatWest Markets barely made a profit as costs remained high and only managed to report a return on equity of 0.8%.

The H1 group impairment charge was £2.9bn or 1.72% of customer loans. Management guidance is for this to fall in the second half. From a consumer perspective management talked about a 10% bounce in debit and credit card spending July v June.

NatWest has £40bn of commercial property lending on its balance, and the commercial bank saw a trebling of impairments in Q2 v Q1 to £1.4bn as the bank marked down its macro-economic assumptions but also adjusted for significant falls in real estate valuations. This suggests investors may want to wait before trying to call the bottom in commercial property REITs or stocks such as Hammerson (which announced it is to raise £552m via a rights issue, following a first half loss of £1.1bn).

The 4 clearing banks (Barclays, HSBC, Lloyds and NatWest – formerly Royal Bank of Scotland) share prices are trading close to 20 year lows, both in terms of absolute share price and valuation (price to tangible book). Virgin Money, Metro Bank have been excluded from the chart below because their history does not go back far enough to show performance through previous recessions. 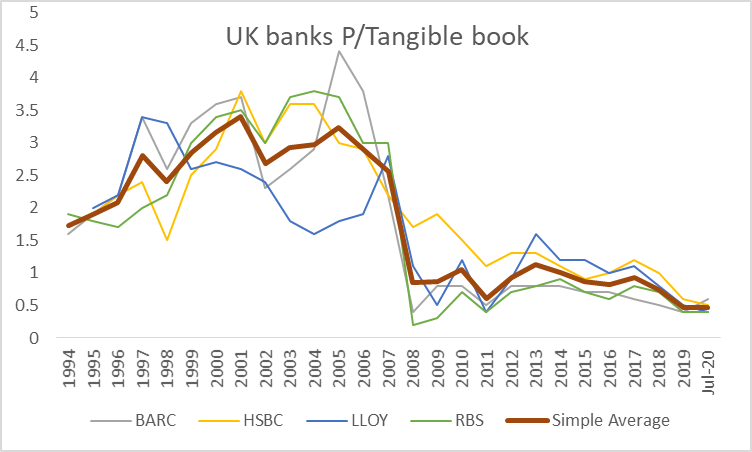 Source: SharePad – Downloaded from SharePad into a CSV file, using the “share” button on the far right of the screen.

The thick brown line shows that the sector average valuation peaked in 2001, just as the TMT bubble burst. Hard to believe, but back then investors (correctly) assumed that banks were relatively defensive compared to the hugely hyped and overvalued TMT sector. Lloyds valuation peaked before this in the late 1990s when it was briefly the biggest (and most profitable) bank in the world by market capitalisation, whereas RBS and Barclays enjoyed the tailwinds of capital markets businesses peaked afterwards in 2004.

The table below also shows key data for the UK clearing banks which have just reported, plus HSBC and Standard Chartered which I may comment on in a future piece.

Bank analysts often prefer price / net tangible book as a ratio over the p/e, because bank earnings can be so volatile. For example, SharePad shows HSBC currently trading on a p/e of almost 180x, despite the share price trading around the levels it was during the Asian crisis in the late 1990’s. That is, the “e” of the p/e ratio is currently suppressed leading to an artificially high p/e. Similarly a p/e ratio would not have been much good for valuing NatWest / Royal Bank of Scotland during the 8 consecutive years of losses the bank reported post 2008 financial crisis.

The table above also shows the substantial price to net tangible book value discounts (NTAV) and the performance of bank share prices since the end of February this year when the stockmarket peaked pre-Corona. I have sorted the banks by this percentage change column, to show that Lloyds has been worst hit down 45% and perhaps surprisingly Barclays and Standard Chartered have been the least worst, still down circa 30%.

With bank valuations at such large discounts to book the investors are clearly sceptical of target returns banks have previously announced. At the start of the year UK banks had medium term target Return on Tangible Equity of above 10%, as the table above shows.

Pre 2008 many bank Chief Executives were rewarded for double digit EPS growth (notably HBOS, Northern Rock and RBS) with disastrous results, so the change is clearly an improvement from a shareholder perspective. Banks capital ratios are well above levels reported 10 years ago, meaning that unlike many other sectors, we are unlikely to see distressed rights issues in the banking sector. Instead the worry is that banks are likely to report returns well below their medium term targets in FY 2020 and beyond. UK banks have a long history of being over optimistic with their guidance to investors, and it appears the banks central scenarios and modelling assumptions are for no further deteriorating in the economy in the second half.

The hope is that now that management incentives are weighted towards strong capital ratios (core equity tier 1 capital) and increasing returns earned on the capital (Return on Tangible Equity) as well as more quality measures (customer complaints, Net Promoter Score, gender diversity to name a few) the better alignment with customers and shareholders may mean that the bad news is in the price, and we are likely to see improvements in expectations from here.

If these medium term RoTE targets are broadly achievable, then all 3 banks appears significantly undervalued.

Despite the disappointing share price reactions on the day, expectations for UK banks have sunk so low that they now qualify as unloved “deep value”.

Rather than bad debts, many questions to management on the analyst calls focused on the outlook for top line, and whether banks can manage costs in a difficult revenue environment. Particularly as low margin mortgages seem to be recovering faster than higher APR unsecured balances (which makes sense from a consumer perspective, paying down expensive credit).

But with substantial discounts to net tangible book value, low expectations are priced in. Dividends and buybacks have been suspended, but the UK regulator will consider allowing them to resume in Q4. The read-across from management to other sectors of the economy suggests that companies that rely on housing market activity (such as estate agents) are more likely to see a positive surprise than those in commercial property.