The idea of investing in a fund which will help facilitate the transition towards a more sustainable energy mix has spawned a small army of London listed closed end funds and investment trusts. At last count there are over a dozen such funds listed and with all of them there is an explicit focus on generating an income from infrastructure assets such as wind turbines (onshore and offshore) and solar panel farms. These funds have proved very popular and most are now priced at a premium to net asset value.

But they also have their challenges, not least because they are in something of a rock and a hard place. They’re either dependent on government subsidies or they’re increasingly dependent on wholesale power prices, which are falling as the mix of power sources shifts towards low cost renewable power – offshore wind costs are for instance plunging as technology improves.

The SDCL Energy Efficiency Income fund offers what I think is a compelling alternative, well suited to the defensive investor. To explain its business model let’s imagine you are a big bank (say Santander) which wants to cut lighting costs. One very simple way of doing this is to replace all the light bulbs in your offices with next generation LED bulbs. It’s a simple process but it is also time consuming and initially expensive. So, why not work with a financial institution who will pay up front for these costs and then recoup those costs over the long term. They’ll also work with big engineering providers such as GE to run the project.

Alternatively imagine a major US steel mill which produces huge amounts of excess heat and energy. That ‘waste’ output can be used productively to power a generator/turbine or heat local homes (called combined heat and power).

These are all in a simple sense infrastructure investment designed to generate an energy saving which will trigger a cashflow, usually paid for by a corporate keen to do the right thing and also save money. You will instantly notice that these projects have very little sensitivity to either government subsidy or wholesale power prices. They are also long-term projects generating long term, contracted revenue streams which means that the underlying assets shouldn’t be hugely correlated with the wider economic cycle.

The yields on offer in the sector – between 4 and 6% per annum for the end investor – aren’t huge but they are sensible, dependable (Unlike equity income dividends) and steady. They also help explain why this new investment fund launched only in December 2018 has proved to be so popular. At launch in December 2018, SDCL Energy Efficiency Income raised gross proceeds of £100m, which was below its £150m target, but it has continued to grow since then. It raised a further £72m in April 2019 – which helped pay for what are called co-generation assets in Southern Europe and rooftop solar projects in the UK and Portugal and then an additional £100m in October 2019 to support (amongst a number of projects), on-site energy and energy efficiency projects in the US. 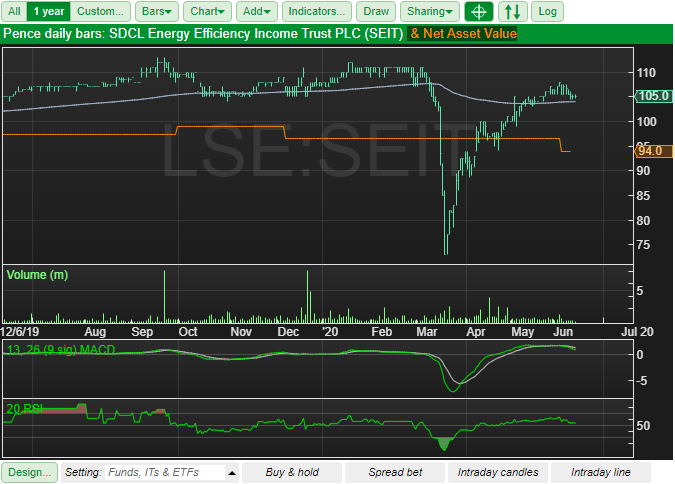 By investing in the fund you get access to a diversified portfolio of 26 energy efficiency investments. I’ve identified below some key features of these projects based on reported fund information:

In the table below I’ve broken out these portfolio investments in much greater detail.

It’s worth noting that over its short time on the UK market, this fund has changed its investment policy. It recently proposed removing its minimum exposure limit of 25% to UK based investment assets which was adopted at the time of the IPO in 2018. The fund says it remains focussed on its sterling based dividend targets and NAV and is committed to having appropriate hedging arrangements in place for its portfolio, but clearly in order to grow the fund needs to invest much more aggressively at the international level.

To understand how its growing and evolving its worth focusing on a recent (December 2019) investment of $110m in a US industrial energy efficiency portfolio. According to a report at the time by fund analysts at Numis this involved the fund buying a 50% interest in Primary Energy, a portfolio of recycled energy and cogeneration projects located in Indiana, USA, from a consortium led by Fortistar LLC for an equity cash consideration of c.$110m.

“The projects are fully integrated into the steel mill facilities, including fuel handling and emissions control equipment and systems that are critical for the operations of the facilities”, according to the Numis analysts.

An important overall point to consider with this fast-growing fund is that most projects are availability-based, rather than demand-based. What this statement refers to is the distinction between different types of infrastructure projects. Availability projects means that the fund receives regular payments from the Client as long as that project or asset is “available” for use in the manner and to the standard agreed in the contract. A collapse in the wider economy shouldn’t have any impact on payments. Demand based means that the fund expects to receive payments correlated to the level of usage of the project asset. So, if the economy tanks, and demand falls with it, payments could decline sharply. Clearly given where we are with Covid, availability is better than demand.

One final key positive for me is the team behind the fund – a group of highly experienced green infrastructure veterans at SDCL. The fund is managed by Jonathan Maxwell (CEO) and Miles Alexander (Investment Director) of Sustainable Development Capital LLP which is based in London. The funds’ Chairman is Tony Roper, formerly lead manager of HICL Infrastructure.

A source of income

Generating a steady stream of income is a key selling point for this fund. Over the first year the dividend payout was a tad below its long term target as the pipeline of projects built up. But in a recent update from the management the fund confirmed that it remains on track to achieve the target dividend of 5.0p per share for the year ended 31 March 2020 and expects to declare its next interim dividend during May 2020. Crucially the 5p targeted dividend for FY20 is expected to be covered by earnings and cash flows. The 5.5p target for FY21 has also been reiterated. Over the long term the target total return (income and capital gains) is around 7- 8% pa, and crucially the fund is looking to progressively grow the dividend payout over that long term.

Back on May 18th the fund released a trading update ahead of the publication of the Company’s results for the year ended 31 March 2020, which are expected to be published on or around Monday 15th June 2020.

As you’d expect investors wanted to know what impact Covid 19 was likely to have on the underlying projects. According to the manager this seemed to be in line with expectations. The fund confirmed that it’s underlying assets are “predominantly availability or capacity-based with any offtake agreements typically structured on pre-determined terms. The portfolio’s value is therefore not expected to be materially impacted by any reduced demand for goods or services that may arise as a result of COVID-19 linked restrictions”. Alternative fund analysts at Liberum also observed that “there is also no power price or direct GDP sensitivity within the portfolio, placing the fund in a strong position to weather the impending economic downturn”.

This Liberum report did identify two key areas worth keeping an eye – counter party risk and construction risk. With the former the Liberum analysts pointed to ArcelorMittal, which is “the fund’s largest source of counterparty exposure (19% of GAV) as part of the Vulcan recycled energy and co-generation portfolio. ArcelorMittal is currently rated BBB- by S&P with a negative outlook, and with the steel producer planning on raising $2bn to cut debt levels.“ In terms of construction risk there have been some “short-term construction delays [which] likely relate to Tesco rooftop solar projects and the Huntsman Energy Centre. On the latter, the production of steam (i.e. revenue generation) was due to begin in H2, but we note the contractual retention that does not become payable until after construction completion”.

Another key area worth keeping an eye on is the use of debt, or leverage. Many renewable projects involve some form of debt and the fund itself also makes use of leverage, to boost returns to investors. According to the fund total Group-level borrowings were c.£63 million as at 31 March 2020 (30 September 2019: £0 million). £39 million of the Company’s borrowings is repayable in July 2020 which, absent any refinancing, would be payable from the Company’s existing cash reserves which totalled £70 million as at 31 March 2020. The remaining debt is not due to expire until June 2022.

I mentioned earlier on that I think one of the key positives for this fund is its experienced management team, who have been quietly building a long pipeline of projects. According to that trading update “the Investment Manager is currently analysing and performing diligence on a number of nearer-term potential opportunities with a total value in excess of £100 million. There is also an extensive larger pipeline of longer-term potential opportunities, with the assets remaining subject to due diligence and negotiation. The acquisition opportunities include assets in CHP, local area network solutions, rooftop solar, storage and charging infrastructure, lighting, heating, cooling and other solutions.” That sounds positive to me.

I’ve already discussed some of the more immediate risks in the earlier section on the trading update – there is some risk with some of its customers plus there’s always the potential that construction projects could go wrong. Pulling back from these immediate challenges there is much less generalised risk than with some other ‘green’ funds. There is no government subsidy, no exposure to power prices and no obvious exposure to the economic cycle (declining demand for power).

There are some very obvious general risks with being a closed end fund in this popular space. In the big sell off in mid-March this fund’s share price plummeted and those readers who follow by blog – at www.adventurousinvestor.com – were alerted to the push below 90p a share which I thought was a massive over reaction. The share price has now bounced back up to a premium but there is always the concern that the fund could caught up in a wider sell off in the renewables space, even though its business model is very different.

I think this fund is an excellent addition to my Prudent 15 list. Put simply its boring, and its target return is modest. No one is going to get terrifically excited about a 5.5% income yield and total returns of say 7% per annum. But sometimes boring is good and the fact that this fund plays into much broader themes around decarbonisation and the need for greater energy efficiency doesn’t need dwelling on. A few weeks ago I recorded an interview with the manager and one of the directors – an expert in the field of renewable energy and founder of Bloomberg New Energy Finance – and if you want to find out more about these broader trends and the fund please do watch the video. Its available via either of the links below:

The Chapter 5 only video can be found here.

My sense is that for the investor looking for a diversified source of boring long term income this fund ticks all the boxes.