Kicking off with BH Global (BHGG)

You can always read more about my views on funds at my blog www.adventurousinvestor.com. I update this most days, especially useful during these volatile times when new investment opportunities emerge very quickly.

I’m not going to bore readers with speculation about viruses and volatility but simply ask them to take a look at the table below. This shows data – from SharePad –on recent performance of a select handful of funds over the period through to Wednesday 18th March. As you’d expect the main benchmark indices have been plummeting in value, but a handful of funds have produced what I think are very solid results.

I’ll be discussing Personal Assets, Ruffer and Pershing in later articles but for now I want to focus on BH Global which will be the first fund in my Prudent 15 list.

Year to date this has produced a return pf 12.7%, numbers that are largely mirrored on a 1 month and 3 month basis. Crucially you are not even having to pay a premium for this premium performance – the fund trades at a 1.3% discount.

The numbers above refer to the share price, not NAV, but at the last announcement BH Global suggested that in the week ending 28 February, its NAV increased by 3.7%. To put this into some context, the MSCI World and FTSE All Share fell by 10.5% and 11.1% over the same week.

So, what makes BH Global – and its sister fund BH Macro – so different? Put simply these funds deliver what a long line of absolute returns funds and hedgies have been promising for years – relatively low volatile steady returns in all markets. Crucially these funds have also preserved capital during times of market stress. If we look at benchmark data for the MSCI AC World index in recent years, we can see the following short periods of strong performance:

So, on paper what we have here is a hedge fund delivering on its promise – absolute returns. It’s a great marketing boast but unfortunately the vast majority of other funds in this space have singularly failed to deliver. And if we’re honest, those poor returns have fed through into a general cynicism about the hedge fund space. That in turn has translated into significant fund flows out of the space which has hit the managers behind this investment trust, Brevan Howard. The fund managers assets under management (AuM) over the last few years has fallen from $40bn to $7bn.

That’s forced BH to rethink its business proposition and it is thus no surprise that recently we learnt that founder Alan Howard has stepped down as CEO. Aron Landy, currently the Chief Risk Officer (CRO) assumed the role of CEO but Alan Howard has decided to focus on his own trading activities. He remains manager of a dedicated fund, the BH AH Master Fund, which was launched in 2017. This echoes what Bill Ackman has done at Pershing Square – the hedge fund founder has decided to refocus on what they were good at, which is running money.

Crucially the firm has also decided to implement a number of big changes to its internal structure. Fund researchers at Numis reported that a “number of separate funds were launched, either supporting individual traders or groups of traders who had been managing money for the Master Fund. The new approach increases the ability to retain is key traders in a competitive market and allows them to raise external capital directly. The focus remains investing in a range of macro trading strategies (including interest rates, fixed income and FX), seeking to find that have an asymmetric pay-off profile. In addition, to Alan Howard’s dedicated fund, separate funds have been launched for Alfredo Saitta (interest rates and forex, particularly Euro interest rates), Fash Golchin (interest rates) and Minal Bathwal (Asia macro). The Alpha Strategies fund is a collection of traders with smaller allocations focused on relative value and tactical trading. The allocations by fund are below. Alan Howard’s performance is not reported separately, sitting within the “Other” category.”

The graphic below breaks out the fund’s current (end Feb) distribution of assets between the various strategies – the bottom section also details performance returns for the various sub funds. 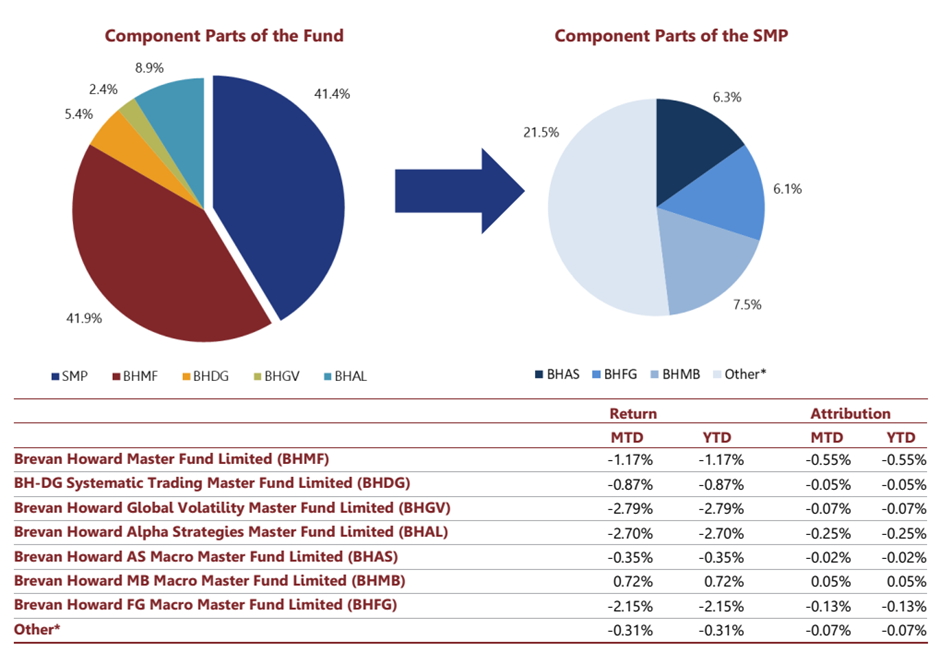 I feel I must at this stage make an admission. The cynicism I talked about earlier isn’t entirely undeserved, even for the BH investment trusts. The reporting we can see above is useful but in essence we are still faced by a series of black box strategies. Whenever one talks to the people advising the fund, there’s a general reticence to talk about what it is the fund is actually investing in i.e are they taking bets on a falling stockmarket or a rising dollar or cheap emerging market equities?

The graphic below, from the funds’ January monthly fact sheet, nicely demonstrates this black box challenge. It shows the various distinct asset allocations within the fund based on different strategies and asset classes. I presume the bets on volatility (vega) have done well as have the interest rates trades, but that would be complete guessing. As I have said already, trying to get more detail out of the fund manager is nigh on impossible.

To be fair that reticence is justified, I suppose, because the managers doesn’t want to give away their best trading ideas but it doesn’t help build a sense of transparency. And I would return to that word I mentioned just now – trading. There’s no getting away from the reality that this hedge fund is involved in trades, lots of them. If I’m honest, I have a general suspicion of market timing and excessive trading. In my cynical view, most excessive trading activity is an utter waste of time except if you are very, very talented and have a real gift. 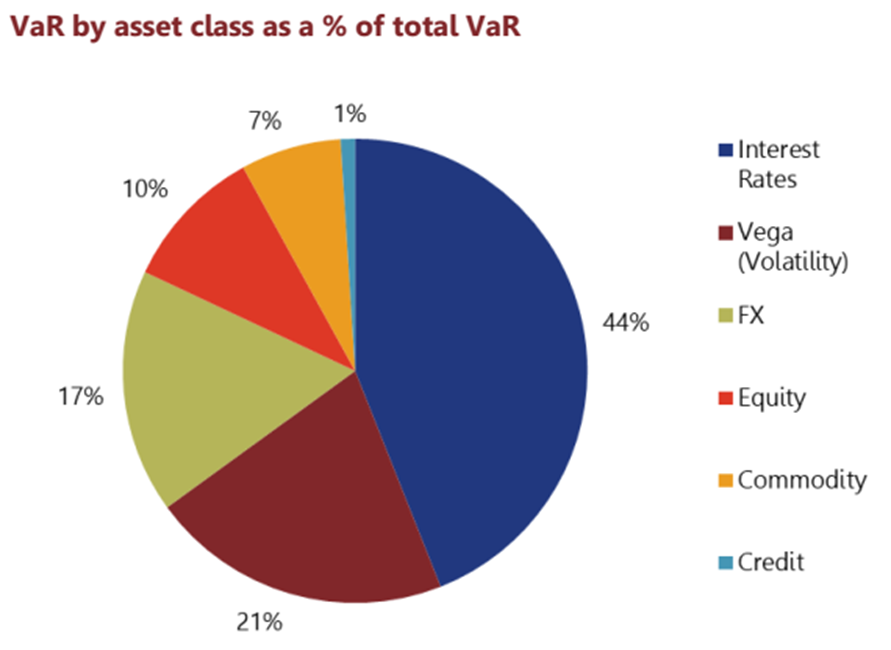 Trading activity also depends on something to trade on, by which I mean useful signals which allow a smart trader to leverage good ideas. And over the last few years, pre virus, those signals weren’t in great supply. Which helps explains why many of the numbers in the next big table below – performance data month by month for the BH Global fund from end January– were for a number of years unappealing.

In truth BH Global suffered from a number of dull years as interest rates were at low levels and forward guidance by Central Banks reduced interest rate volatility and trading opportunities. During this fallow period, the discount on the fund opened up on the fund and the board, successfully in my view, worked hard to narrow that gap between net asset value and the share price, by running buybacks and tender issues. That has helped to boost the appeal of the fund and it now looks like we might be entering a much more volatile era in which those signals I mentioned could prove more useful. That said, despite the more active fund strategy, the discount has re-emerged again and in fact widened over the last few weeks, which I am at a loss to explain! See the second chart below from fund analysts at Investec, which maps out the evolution of the premium/discount. 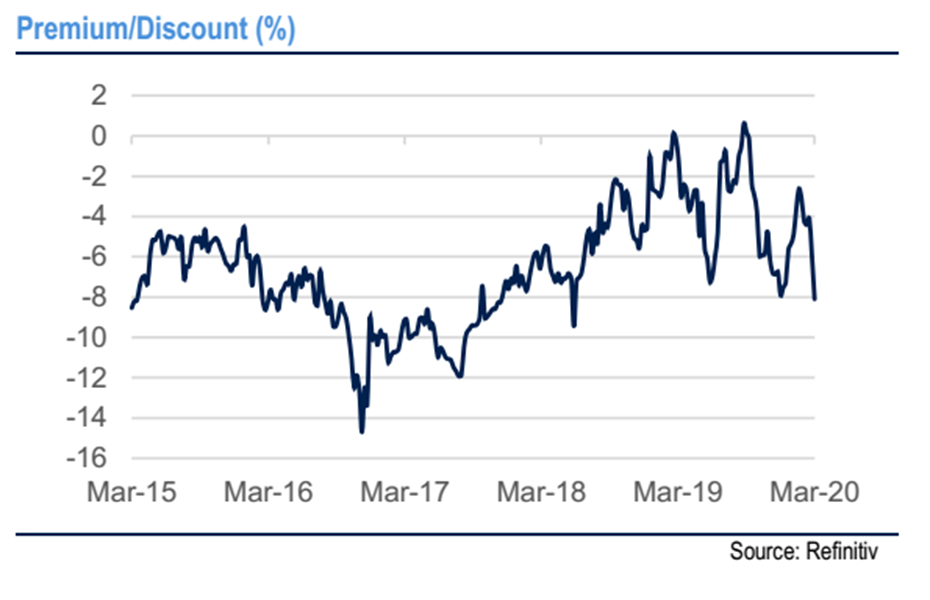 So, my bottom line is simple. This is a complex beast, run using complex strategies but designed to achieve a simple purpose, absolute returns through a cycle with an emphasis on making money during periods of pronounced volatility. If you are a prudent, defensive investor, willing to put up with the idiosyncrasies that come with that complexity, then this could be a great long-term investment vehicle. On the other hand this fund is absolutely not ideal for the long-term growth investor who is willing to live with risk and volatility, and should thus be avoided by the more adventurous. But for many investors, during these times of great stress and concern, this could be an ideal defensive fund. My sense is that it’s not too late to Buy.