A market of stocks or a stock market?

January was a good month, despite the FTSE 100 closing down nearly 3.5% and the outbreak on coronavirus soon to kill us all. Or is it? Well, it’s been declared a global health emergency by the World Health Organisation. But what seems likely is that the media has whipped up the story in order to sell more papers.

In a few weeks I suspect coronavirus may well be old news, and we’ll have another reason to sell all of our stocks and dash back to cash. Since Boris won the election, we have seen a surge in UK equities and with Brexit now ‘done’, hopefully we can move forward.

January is awash with trading updates and results. It throws up opportunities, and though the FTSE is down, as a trader I outperform in volatile conditions due to more activity to capitalise on the opportunities. This is because I am careful to manage my risk and keep the risk to the upside. Also, if stocks are flat or not moving much, then it’s much harder to make any money.

What has been clear from the Twitter UK stock market community is that many performances were heavily weighted and dependent to the stocks that they were in, as there are reports of both terrible and fantastic Januaries. For the active trader, when the RNS machine is printing pages in overdrive, it makes sense to be ready to catch them.

MPAC, formerly Molins, came out with a thundering update, as the company announced an upgrade of expectations that had already been upgraded. For those who scour RNSs for signs of a catalyst, this will have popped up on many traders’ radars, with myself and others taking long positions on the opening bell. 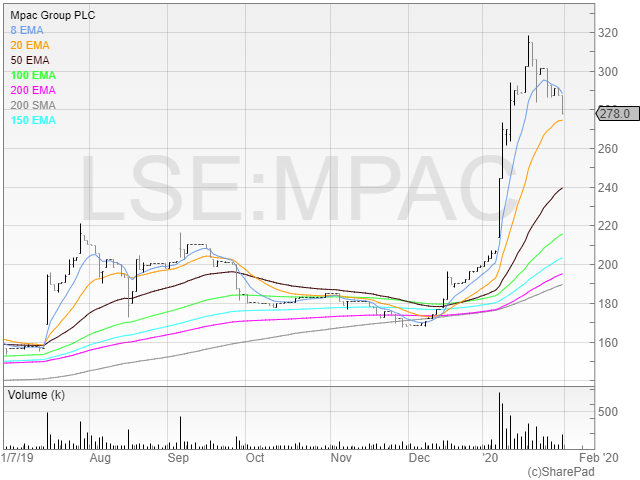 The price closed at the high of the day on monster volume – a sign that the stock is likely to go higher. Whilst I made a profit on this stock it’s important to look back on the trade and see what could’ve been done better: what I should’ve done was added to my position and increased my stop. Trading is a game of probabilities and playing odds, and the odds would’ve been in my favour if I’d have increased my long position. Trading is also a game of always learning!

I could buy in cheaper now if I wanted to do so. But I don’t want to do so. I’d rather buy when the stock has shaken out the sellers and is ready to move higher; the price will tell me when it breaches the high of 320p. I’d rather buy a stock with a higher probability or moving into profit than buying back cheaper. With the business clearly trading well I think MPAC could be the benefactor of an earnings upgrade cycle.

Polarean is a pharma business, which recently had a Phase III trial. A director bought ££99,921.90 worth of stock a week before the results at 29.6p. The general opinion was that this Phase III trial was expected to succeed.

I always wonder why people are prepared to take the risk on these stocks. Motif Bio had passed both Phase III trials REVIVE-1 and REVIVE-2, which had been designed with and prioritised by the FDA, who then decided that they wouldn’t be progressing the drug to commercial use. The stock tanked from 39p to an open of 6p.

With the market expecting Polarean’s Phase III trials to be successful – what was the downside if the company hadn’t been successful? The upside couldn’t have been that high because it was priced in to an extent.

Sure enough, the tape read as if there was a seller. I warned against buying in on this in my Facebook group as buys were being printed at the bid level and many round trade sells were going through. 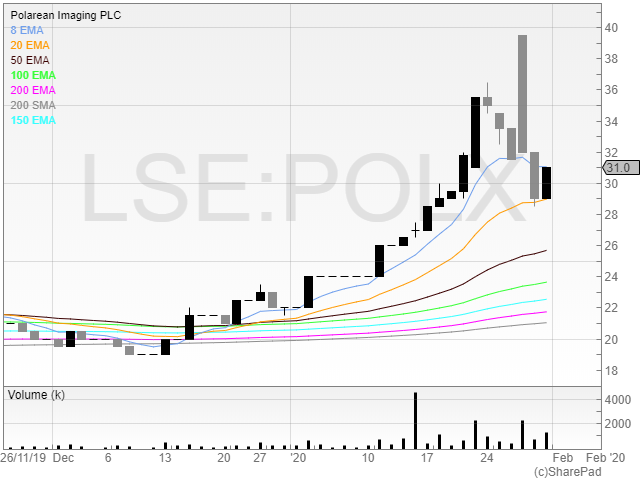 It pays to watch Level 2, because anyone who was tempted to buy and could see the tape would’ve stayed well clear. The stock opened at 39p, and crashed 10p in two days – cheaper than the director’s buy in price!

Polarean may be a winner one day – and it may break out of that 39p high eventually, but for now the stock will need to consolidate, and the excitement of the imminent Phase III trial is now over. That is likely to be the reason for the 50% rise in price from mid-December.

I hold a long position here, and GAN issued a “Favourable Trading Update” for FY 2019. I for one am sure glad it wasn’t a disagreeable one!

We were told that revenue is expected to be ahead of expectations, coming in between the range of a growth of 115% and 120%. That’s great, and profits? We’re not told, but in an article in The Irish Times says: “with earnings anticipated to be in the range of £7 million to £8 million, a trading update from the company said”. I didn’t see it, and I’ve checked again. So it must be well hidden.

GAN has moved out of what is a clear well-defined shallow base and surged in recent months. 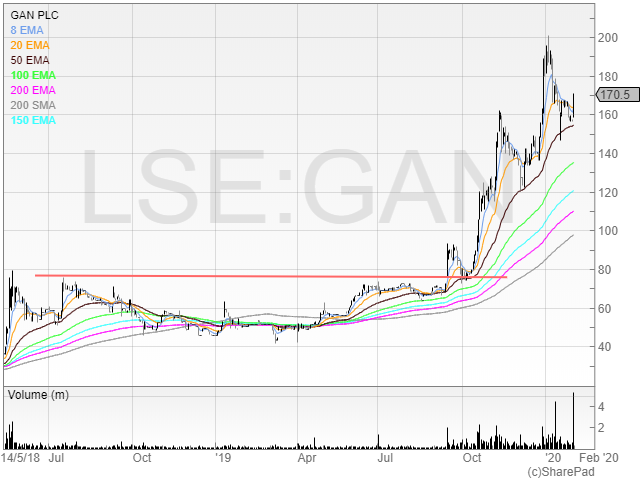 The 50 EMA is now a clearly defined support line, and so this will be viewed by many on the side looking for an entry to go long from a test of this. Over the last few weeks, there has been a continuous seller. With such a huge volume spike, a good chunk of that overhang must be cleared.

What is also interesting is the intraday chart. 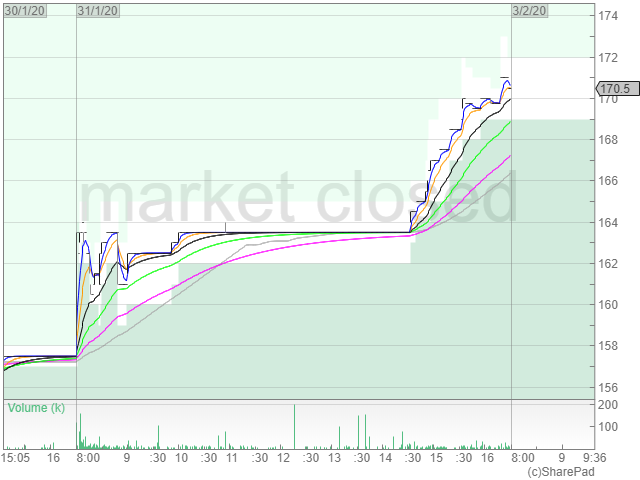 There was clearly a held offer throughout most of the day, but in a last hour of trading the price began to rise freely. Could this be the end of the seller? Perhaps, but it could also be that the seller’s broker had forgotten to reload the next block.

I intend to add to my GAN position should it break the recent high around 200p.

G4M has had a torrid time over the last year, with the stock hammered on a profit warning in January. The market clearly wasn’t expecting this given the huge volume and selloff. I outlined my reasons for why the stock was potential short here, and aside from a scalp long on reversion back to the mean I haven’t touched the stock since. 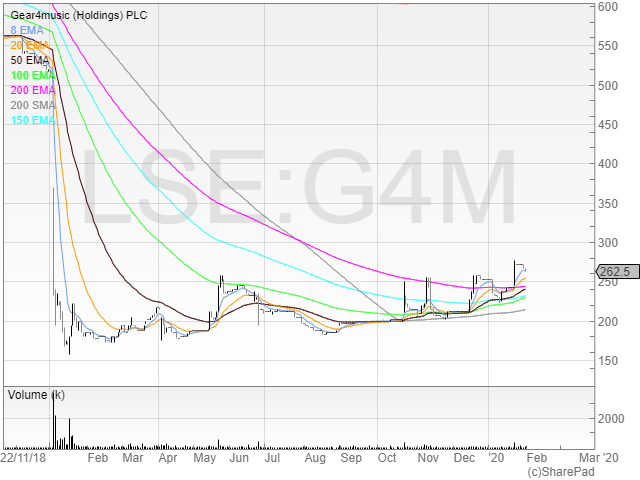 However, the trend may now be changing. The stock has stabilised over the last twelve months, and is now trending above all of the moving averages.

I can’t see the fundamental case here for a buy, but if the stock is going to trade higher based on anticipation of those forecasts being beaten (“FY20 profits expected to be at least in line with Board expectations”) then I may take a position. 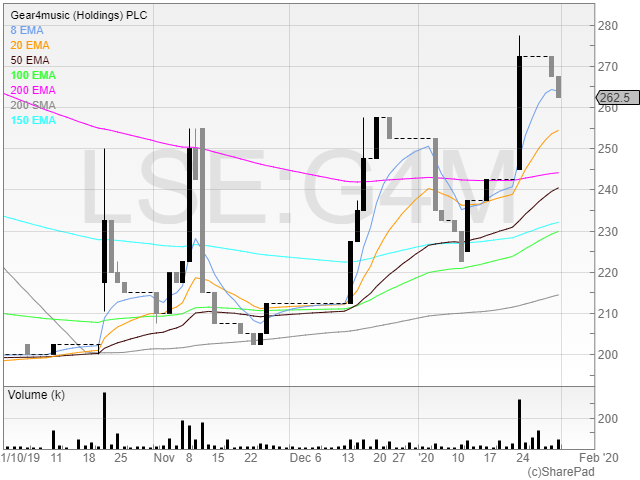 Buying appetite dried off after the initial rise, and the stock has started to tick down though volume was small. It may be that further cards are required to be overturned before more volume arrives into the stock, but it’s worth setting an alert at the previous high to see how the stock reacts.

No stocks mentioned in this article are recommendations to buy or sell. This article represents the opinion (and the opinion only) of the author. Michael Taylor does hold a position in GAN plc and does not hold a position in any of the other stocks mentioned, long or short. You can download Michael’s ebooks on the UK stock market at www.shiftingshares.com.