Suggesting that Scrooge’s drive and self-discipline was something we should aspire to didn’t go down well with my millennial children. I rationalised the barrage of criticism as the product of low rates, plentiful debt and cheap money making the concept of being economical unpopular. Scrooge’s world was one of narrow dark alleyways -similar to Change Alley in the City of London where stockbrokers, once barred from the Royal Exchange on account of their “rude manners”, plied their trade.

As the plundered goods from a sprawling empire were unloaded on the London quaysides the exchanging of the goods was carried out alongside the financing of the costly expeditions. The ship owners were ever eager to participate in the exciting returns on offer, while brokers were ever eager to take a slice in between. The owners of the investments never sat comfortably with those doing the exchanging and when the Royal Exchange was opened by Queen Elisabeth in 1571 stockbrokers were not allowed in. Instead the stockbrokers plied their trade from what became known as Exchange Alley where Jonathan’s Coffee House was situated. This coffee house institution was ultimately renamed the London Stock Exchange.

The “rude manners” of yesteryear have now been super-ceded by “conflicts of interest” but these brokers continue to sit uncomfortably at the heart of our system. Self-regulation was once used as a system to ensure fair behaviour whereby miscreants simply got “drummed out” of the club and when that system failed to be inclusive regulation was passed to an independent body now called the FCA. Brokers charge investors to trade, but also charge companies to place stock, write research and make markets. The conflict of cross subsidisation led to Mifid 2 in January 2018 which required stockbrokers to menu price their offering without cross subsidisation.

The result has been less small company research. Commission rates on trading stocks have plummeted such that stockbrokers no longer spend time telling stories in order to place large lines of stock reducing liquidity, particularly for smaller stocks. And stockbrokers’ profits have been hit. The word “stockbroker” has been replaced by the word “investment bank” in an attempt to gain respectability while banks have become the source of disdain to the extent that a special, higher rate of tax has been introduced for banks.

But the operation of an exchange is important to the UK. The huge wealth that has been created in the City evidences that promoting stocks is frequently a more profitable industry than investing in the offerings. And yet the disdain in which these stockbrokers are held can lead to quoted stockbrokers’ shares being undervalued by markets.

There are several quoted stockbrokers but the two that interest me are Numis and Cenkos. Cenkos has never reported an unprofitable year of trading which in the “feast or famine” world of promoting stock offerings is important to protect against the downside risks. Also, strong balance sheets are important contributors to risk mitigation. There is a litany of quoted stockbrokers who have given investors uncomfortable rides and ultimately get taken over. Durlacher, Panmure Gordon, Merchant Securities to name 3 such quoted companies of the more recent past, while SG Warburg was once in the FTSE 100 before being bought by Swiss Bank Corporation in 1995. 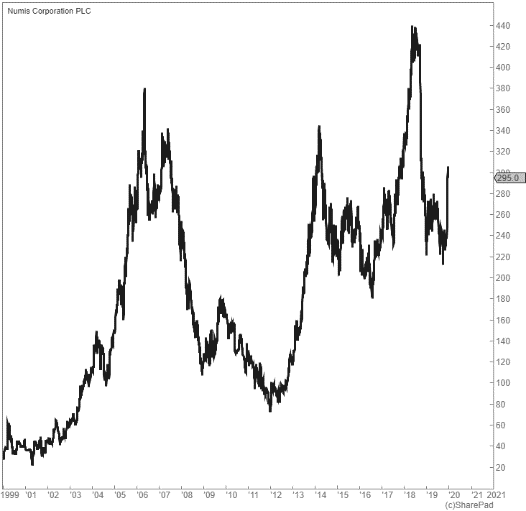 Originally called Raphael Zorn Hemsley the private client broking business was sold off in March 2000 and a bulk hire of staff from Panmure Gordon built the institutional broking franchise while the name was changed to Numis, the latin word for coin. Oliver Hemsley had started his professional life as an office junior at Brockbank Group, a Lloyds marine broker and the events of 11 September 2001 meant that the insurance sector was in need of recapitalisation, which enabled Numis to step up to the plate when the broking sector was in one of its cyclical melt downs. It is this ability to build a business when others are in disarray that marks out the successful businesses and in Numis’ case the insurance franchise gave it that ability.

For many years there were no estimates for Numis on account of the lumpy nature of the revenues the only certainty was that estimates were wrong. They could be higher or lower depending on which transactions completed in the year. Having sponsored forecasts from Edison in recent years the company has suffered last year in a weak period for corporate placing and presumably as part of the cost cutting Edison has succumbed. No estimates exist today. Results to September 2019 showed revenues down 18% to £111.6m. Costs fell from £106.3m to £97.5m while the year-end headcount increased from 273 to 277. It is this investment through the income statement that enabled an increase in the corporate client base to 217 companies with a 7% increase in the average market cap. PBT fell 65% from £31.6m to £12.4m. The balance sheet net assets of £138m largely comprise £84m cash and £38m trading investments.

With 217 corporate clients of a total universe of quoted companies comprising 1,254 on the main market and less than 900 on AIM it is hard to argue that Numis’ market share will grow hugely. However, the installed client base of 217 corporates is likely to generate fees going forward so in my view this business should be valued as a cash cow rather than a growth business.

The problem valuing a business which is cyclical is what earnings to value it on. I suspect a reasonable approach to take is to estimate the trough cycle earnings, the peak cycle earnings and the maintainable earnings. 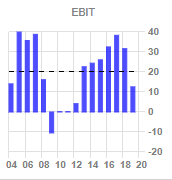 This stockbroker with the largest market share may be capable of delivering £100m PBT. However, after a 10-year bull market it seems we may have forgotten what a bear market is like and 2019 results were in fact nothing like as bad as it can get in a bear market. The very high fixed cost base makes this hugely geared to markets. At 30X last years earnings the shares don’t therefore appear cheap enough to tempt me. The 12p dividend has been held for the past 4 years and a yield of above 5% is not enough compensation to reward me for the risk that when things get really bad there could be no dividend. I will maintain my self-discipline and only buy this when there is blood on the street in exchange alley. 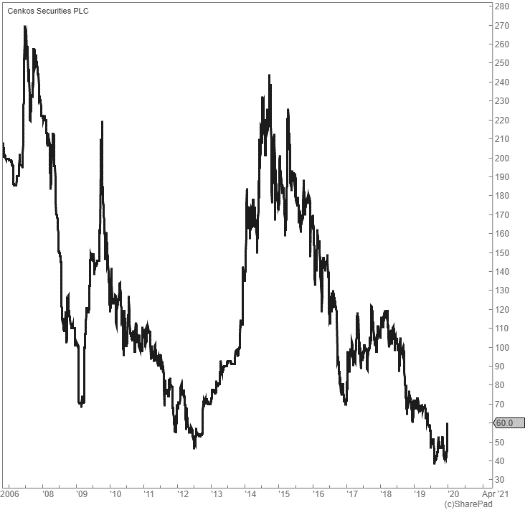 Cenkos was formed in 2004 by a group of individuals coming out of Collins Stewart and listed the company in 2006. Andy Stewart, Collins Stewart’s namesake was a founder director alongside the current CEO Jim Durkin and Paul Hodges, who had an insurance analyst background. The company was set up in an alleyway behind the bank of England and named after Andy Stewart’s racehorse, Cenkos. The share peaked in 2014 after the company brought AA to market earning a significant fee. On the day of the AA IPO Cenkos issued a trading statement which lifted Cenkos shares c 10% while the AA fell to a discount illustrating the value transfer that had happened. Since that time the company’s fortunes have faltered. In 2016 the company was fined by the FCA for a failure to carry out adequate due diligence on a premium listed client (Quindell). The small companies team retired and Jim Durkin, the founder CEO stood down in July 2017 to be replaced by former Bank of England economist Anthony Hotson.

In November 2018 it was announced that Jim Durkin would return as CEO, pending regulatory approval, a process that took until August 2019. The board has been restructured such that the only executive board member is now Jim Durkin alongside 3 non-executive directors.

Unlike Numis there are forecasts in the market for this stock. To December 2019 the company is expected to make £1.8m PBT which will be its lowest ever profit after 2018 when the company delivered PBT of £2.5m. Peak PBT is 2014 was £27m while the company has the significant benefit of having never made a loss in a full year. H1 2019 was the first half that a small loss was ever reported, though having delivered the IPO of MJ Hudson it is likely they will be profitable for the year. At the MJ Hudson IPO the fee was 4.25% of the £31.4m gross proceeds raised as well as a warrant equating to 0.85% of MJ Hudson’s share capital at the placing price of 57p which is exercisable within 12 months of the IPO. So that will add a £1.33m fee in December.

The net asset value of £26m at June 2019 is composed largely of cash of £14.7m and other financial assets £10.2m. This is where those warrants will be held and in bull markets these can have a significant effect on profits. Unfortunately, they are required under accounting rules to declare the warrants held by the company.

The company has 110 corporate clients and the fixed cost base would appear to be in the region of £20m p.a., assuming that the loss making H1 was all fixed costs. However, the company states that costs going forward are expected to fall by £2m p.a. suggesting fixed costs of c £18m p.a. That equates to fixed costs per corporate client of £180k. If we take a similar approach to valuation as we have with Numis we may take a look at maintainable earnings, peak earnings and trough earnings.

With a market cap of £34m, a small premium to the net asset value of £26m there is little value placed on the fact that the company has never incurred a full year loss and with the original team re assembling and a restructured board post the regulatory issues being addressed on Quindell this appears to be a recovery situation where the past problems are in the share price fully. The adage that the past may not be a guide to the future may well apply and I am excited that the shares could well stand at more than half of the fair value. Though shares do sometimes also trade higher than fair value.

If business confidence returns next year as I am expecting now we have an element of political stability I suspect we will get a rebound in the amount of fund raising on public markets accompanied by an increase in M&A activity. This could enable Numis to prosper once again but the high fixed cost base and forward-looking valuation appear to make this a high-risk bet. Cenkos looks to have the added advantage of being a recovery situation where the upside exists while the likelihood of a reporting losses is lower. If they didn’t report a loss in the credit crunch, they are unlikely to now. I think this may be a gem in the back alleyways of the City of London.