It has been rather enjoyable as the year draws to a close. The Boris Bounce was a pleasant experience for investors. Excitingly for some it was a rally in the value stocks. Top of the leader board was the FTSE Small cap rising 5.6% closely followed by those high yield stocks while the low yield alleged “growth” stocks brought up the rear. The FTSE Small Cap index has been the worst performing of this collection over the past 3 years since Brexit shenanigans started as risk aversion prevailed. Now with apparent political stability that risk aversion is starting to reduce. And we have bids appearing with the financial planner and wealth manager Harwood Capital going to private equity this morning. 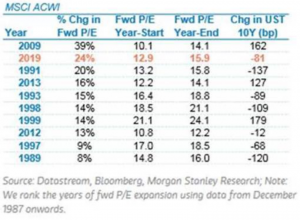 The market is anticipating earnings uplifts, which may well be correct. In reality markets follow earnings. If we put aside our biases and respect what the market is telling us we are going to have a very good 2020. This is not a time to take profits. Now is a time to take risks – as private equity are likely to do.

The individual stocks covered in these notes is included as an appendix due to it being rather lengthy but it is worth reviewing. The date of the original note is annotated on the left-hand side so users can refer to the original note if they feel the need.

I have covered in these notes 100 stock situations this year. 22 of those covered I had a negative view on while 12 of them I was feeling neutral about so the remaining 66 stocks I had a favourable view on at the time. The average of the performance of those positive view stocks has been +13.4% since then while the average of the negative view stocks is +7.3% so it confirms my gut feel that I am no good at shorting stocks and for that reason I don’t. As well as the fact that the leverage involved makes shorting very risky.

It may be useful to review some of the outlying performers but first it is interesting to see that the average PE was 16 at the time of the review and today the average PE is 16.2 showing that the performance has been driven more by earnings going up rather than valuations going up. In my view investors spend too much time appraising valuations and not enough appraising earnings.

While markets have been driven up at the end of this year by multiple expansion that hasn’t been the case with the basket of 100 stock situations I have reviewed in my weekly. Which is one of the wonders of small cap investing. Their earnings can be far easier to predict than the large international companies in the FTSE 100. And – if we stick to what we understand – we have a chance of getting more right than wrong. Which brings me to Lord Lee’s point of view which is that small and well-run companies is a far more appropriate place for long term money to be invested than the large and mature companies in the FTSE 100. This view is diametrically opposed to the view of our regulator who is increasingly pushing private wealth managers to invest in FTSE 100 companies. The result is a growing number of Sharepad/Sharescope subscribers who have decided to take control themselves.

While it is always gratifying to focus on the good performers there is usually more to learn from the poor performers and the mistakes so I will focus on them.

Mistakes have arisen from putting too much weight on valuation. When a stock is performing and is expensive it can always become more expensive. This is a weakness that comes with searching for value stocks. The other lesson here is to make sure I understand a business. For that reason, I frequently avoid Biotech stocks and some technology stocks. However, some of these stocks I remain confident that reality is yet to catch up with the share prices.

It serves as a useful reminder that buying value can create significant winners, but as mentioned above selling on value can lead to poor results.

Both these companies have a significant amount of debt so in 2020 I shall pay more attention to balance sheet leverage in value situations.

While in the flow of cathartic self-criticism I sense it may be useful to take a look at which of my weekly notes had the potential to be most value accretive or value destructive to a reader’s portfolio. Because each week’s note often centres around a theme it may help us to determine the best themes to adopt.

It is fair to say that companies with culture was the note that felt most natural while the note that felt less natural was the litigation funders note. The implication here is that as investors we need to be in the right mindset to make the right decisions. When there are no ideas don’t do anything is a golden rule while sometimes it is easy to change our investing style, for example to that of a trader, when our natural disposition is that of a medium-term investor.

We have enjoyed some dopamine inducing rating expansion towards the end of the year. However, in small cap investing it is earnings that drive shares rather than valuations and as investors we spend, I believe, too much time trading around valuations. While it is important to buy stocks cheaply the time spent looking into valuations searching for our next opportunity can also lead to mistakes when selling expensive stocks. In 2020 I shall endeavour to focus on earnings, not suffer optimism while catching falling knives, not sell on valuation grounds, and most importantly of all focus on culture – the single most important factor for a medium-term investor.

Expecting a positive market in 2020 with AIM stocks disappearing at a fast rate, including Harwood Capital today, the squash in the doorway as the laws of supply and demand play out, could cause considerably more multiple expansion for companies with culture. (see 10 June note) 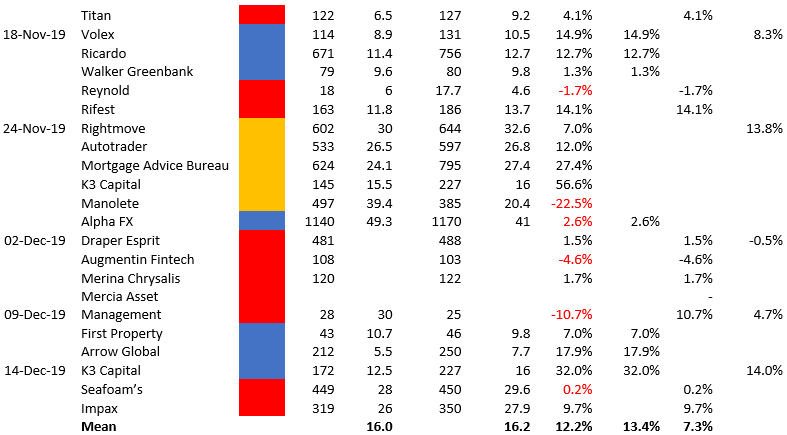