The Golden Era of Small Caps

The fear was palpable last Thursday as I sat in a broking office. The millennials queuing at the voting booths put the fear of God into those traders worrying about a labour government. The traders’ buy to let property portfolios that they had constructed in the image of the highly leveraged CDO instruments that brought down the economy in 2009 were at risk. And then the relief rally came on Friday with FTSE Small Cap index up 3.6%, outperforming the other indices.

Will the small cap be the asset class for this apparent new era where political stability could enable businesses to plan and invest for the future? A review of which asset classes have performed in the last 12 months may hold some clues. The chart below shows the last 12 months performance of varying asset classes compared to the average of the last 10 years. We see that the FTSE 100 and FTSE 250 have had above 10-year average performances but the Eurozone Government Bonds have been the best performing asset class by a long stretch. This storming performance is on the back of the markets’ expectation that the new president of the ECB, Christine Lagarde, is going to keep those money printing presses rolling for some while prolonging the era of easy money (and free internet?).

With the Tories back in with a large majority the year ahead could be one of lower risk discounts in valuations. Commodities, and High Yield Bonds represent two riskier asset classes which feature as the two worst performing asset classes last year. The FTSE Small Cap index features as the only asset class which underperformed its 10 year average last year, while along with the FTSE 250 has the highest 10 year average return, adding fuel to the now forgotten theory that higher risk earns a higher return.

In a world where risk reduces it would seem entirely logical to expect 2020 to be a golden year for UK small cap. I suspect that for the sophisticated trader a long small cap and short FTSE 100 trade could produce good returns on a 12-month view. This time next year the Woodford gating will be a distant memory and possibly after a year of stellar performance those asset allocators at the fund management houses who are answerable to a board of directors or trustees will no longer be convincing the board of the low risk nature of the portfolio. Instead they will be presenting how these emerging companies are the place to be in a world of opportunity.

Who to dance with at the small cap party?

Talk has been of new trade deals with the US and held back investment as well as M&A transactions. My own list of winners and losers looks like this:

The prevalence of capital goods stocks amongst this list of overseas revenue earners makes me feel this sector may be one to avoid over the next phase of the market. Panmure Gordon produced a useful chart to show the serial underperformance of domestic companies which could now be set to reverse. This is born out in the sector performances over the last 3 years where electronic equipment and engineering have been up with the strong performers.

At changing points in markets, we need to be aware of complacency which has a tendency to arise after a number of good years and management then become slow to notice the change in the markets. A good example was YouGov in 2008. Trading on a forward PE of 39X it is was certainly appreciated by investors. The company traded at 8X in 2008 having had a profits warning and has gradually been re-rated since back to 36X today. A look back at those 2008 results shows the company had been dealing with cost issues. Revenue targets were met but the “complexity of managing the cost base increased”. Improved financial management was instituted in order to enable the company to respond to the cost issues. The sign of complacency can be seen in the revenue per head chart that the company disclosed in its 2008 presentation. 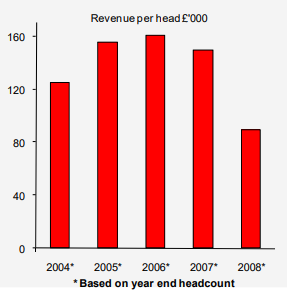 This can be seen through the ROE decline on SharePad. The warning signal arose on the lower ROE in 2007. 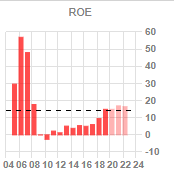 Today there is no such warning signal in place, but it may be wise to keep am eye out for these. However, scanning down the list of stocks that suffer from a negative exchange rate two of them have an ROE graph that exhibits a look strangely like the YouGov chart in 2008 – Zotefoams and Impax Asset Management. Both showing a reduced ROE last year and/or forecasted for this. 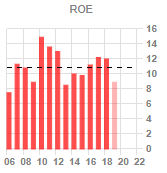 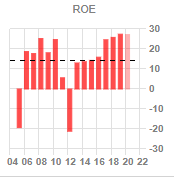 At this potential turning point I would suggest that Zotefoams and Impax are exhibiting signs of the warning lights flashing while K3 Capital, operating in one of the most economically cyclical areas actually fell on Friday when the prospects improved for it. This morning they have released a confident trading statement. 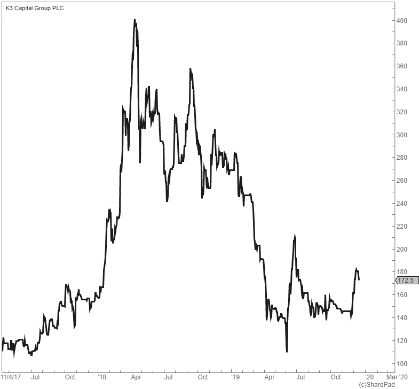 After its IPO in April 2017 the market perhaps got carried away with the companies’ prospects and with the uncertainty in the economy several larger transactions have been delayed resulting in two downgrades. This is a stock where I have confidence in management having been corporate analyst on the IPO in April 2017 and also in the unique sales funnel of using direct marketing which has enabled the company to become the largest small cap M&A boutique in the UK. It seems hard to imagine that it won’t prosper under a new world with a settled political system enabling businesses to once again plan and move forward.

Following delays in transactions the company delivered £5.9m PBT last year following £7.3m in 2018. In the current year to May 2020 the company is forecast to deliver £7.4m PBT. This morning the company has updated the market that it is confident in achieving market expectations and has a strong pipeline with “strong” transaction values. This is important as some individual transaction fees can be as big as £2m. While this makes the revenues potentially lumpy it does make the stock more a play on revenues than a play on valuation.

Having reached a PE of 30X in 2017 when the market believed the company had a magic formula the shares now trade on a PE of 12.3X, with the market having learned the company is also cyclical. With the company having £6m of cash on the balance sheet there is a generous 80% dividend pay-out policy which provides a yield of 6.5% at the current price.

While the shares are off the bottom the forecasts are now underpinned by many small transactions. If these accelerate or some larger transactions complete the operational gearing in the company is significant by virtue of the 40% operating margin on comparatively low numbers. An extra £1m fee would perhaps drop 50% to the bottom line and on upgrades the company could be re rated to say 16X. That would provide c. 40% upside from here. 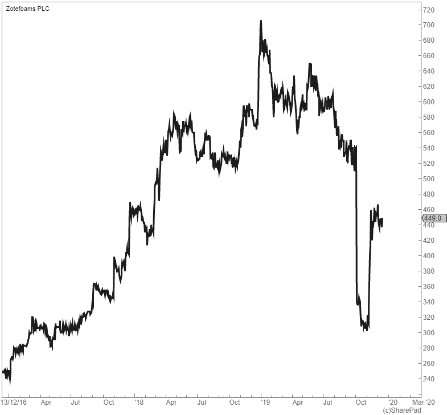 Zotefoams uses nitrogen expansion technology to manufacture lightweight polyolefin and high-performance foams for use industrial markets. It has its own patented technology. It currently manufactures in Croydon and the USA and China. A new site is due to open in Poland in 2020. The balance sheet has modest net cash and while the cash flow from operations, but the significant capex absorbed £10m in H1 and is set to accelerate. The company warned on 3 October that Polyolefin sales in Europe were slowing and therefor group sales were likely to be £6m below market forecasts. The company has limited ability to change the operational gearing in the business and remains confident of its programme of investments. With 36% of revenue coming from Europe from Croydon manufacturing plants a stronger pound won’t help. The company hedges to some extent but hedging merely pushes the currency impact forward.

Having produced £42m of revenue in H1 the company is forecast to deliver £40m revenue in H2 to December 2019. Analysts forecast an increase in the H2 run rate of £80m revenue to £91m in 2020, some 14% increase, resulting in 23% PBT growth. This would amount to quite a temporary slow down in European sales of polyolefin foams.

The saying that profits warnings come in threes is because of the human trait of denial. Investing heavily which will take the company into net debt at a time when overseas demand is weak, and the currency is appreciating suggests a good likelihood of a second profits warning to come. And the high rating could go a lot lower on a second warning. 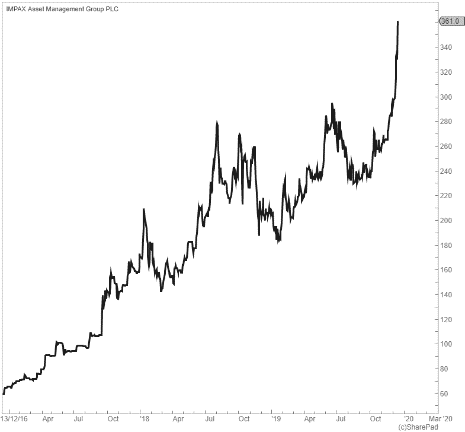 Founded in 1998 as an environmental fund manager the company today has £15.7bn of AUM mainly from institutional as opposed to retail clients. Strong markets help asset manager earnings and may be seen as a geared play on the markets. The company had a distribution arrangement in the US with Pax asset management and in Europe through BNP Paribas who is a 25% shareholder. In January 2018 Impax acquired Pax in the USA for $52.5m with a $37.5m further contingent payment payable in 2021, dependent on performance. In the year to September 2018 this business contributed £2.3m in the segmental profit which shrank to £1.3m in the year to September 2019. £3m of contingent consideration was accounted for in 2018 and this is zero in 2019 indicating underperformance. While the UK business continues to thrive on the back of environmental drivers the US business still operates as a separate entity almost two years post acquisition and is under performing.

The lower ROE indicator picked up above is due to the poor US acquisition. This has been a regular story of woe for many UK companies that acquire in the USA. Forecasts look for 12% PBT growth and 11% EPS growth in the year to September 2020. With the sustainability theme strong and market tailwinds this may be very achievable but a 5% increase in the pound vs the US dollar will cost the company £1m, which is c.5% of profits.

I have never in 30 years of following quoted fund managers seen a fund manager trade on a PE of 25.8X.

The events of last week could herald an unusual period of stability which investors will welcome as evidenced by Friday’s 3.3% increase in the FTSE Small Cap index which has underperformed over the last 3 years of uncertainty. At changing points like this, rising markets often lift all the boats and it is a time to be vigilant and focus on the fundamental changes. There are new dangers, such as a strong pound that will hurt exporters. Time to do some Christmas portfolio re-positioning for the new golden era of small cap performance ahead. Time to be in the economically cyclical stocks but not the exporters. I like K3 Capital but am reasonably convinced investors in Zotefoams and Impax could have a woeful 2020.