The gating of M&G’s property fund caused the press to become excitable last week. The Questor column in The Telegraph advised investors they were “crazy” to have money in open ended property funds as Aberdeen Property fund redemptions accelerated. Brexit crisis and retail gloom also featured as news wires sensed a wounded soul in the field.

There were no headlines saying, “election uncertainty to be over this week”, or “new record for longest business cycle ever” or “number of people in extreme poverty declines”. Today we are wealthier, healthier, happier, kinder, cleaner more peaceful, and more equal than any previous generation. But you wouldn’t know it from the news. Good news doesn’t sell papers. Perhaps that is due to humans natural “loss aversion” bias where we weight losses more highly than gains, so newspapers fulfil our need to avoid the losses.

While the good news, such as the percentage of the world population living in extreme poverty, doesn’t grab the headlines. 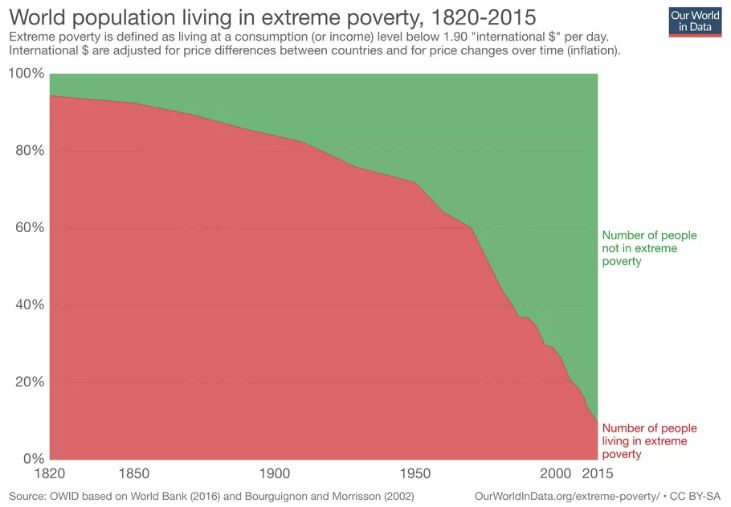 If we had been shown this chart in 1820, I suspect few people would have believed it and yet humans have a remarkable way of fixing things we don’t like. No doubt the day that M&G’s property fund becomes un-gated it won’t be spread across the headlines. The optimists always triumph in markets.

Markets have the same human biases. This week I came across redemptions happening in the market as risk aversion builds to another crescendo. Liquidity aversion, political risk aversion, currency risk aversion, etc, all summed up as that all-encompassing term volatility is again causing outflows from that asset class termed “equities”.

The VIX index is a measure of volatility which is calculated as the change in option prices of a number of asset classes and thus charts the collective view of future changes in prices. The SharePad chart below shows the spike last week which corresponds with the noise around gating property funds and redemptions in the market. 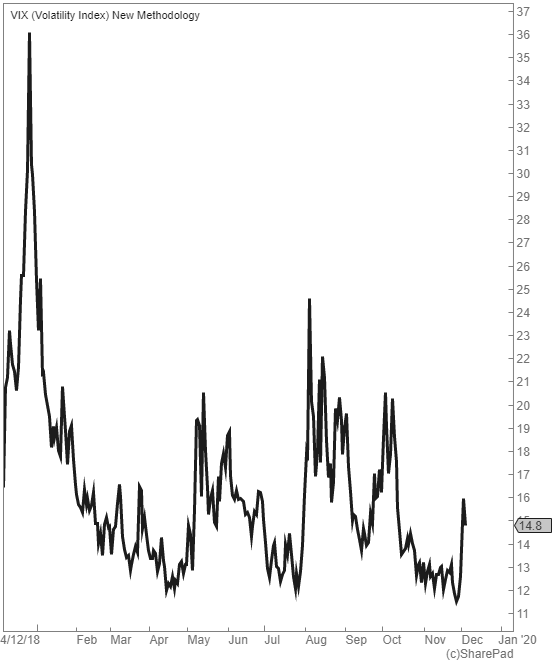 But humans have a track record of making things better for ourselves. It has always been the case that the market rates low risk companies highly. Conversely low risk companies are rated more highly. And companies have that wonderful feature that free markets provide which is an incentive to give the market what it wants. Some are therefore responding to this dynamic by transitioning from a high-risk model to a low risk model, which tends to result in smiles on investors faces.

A good example is Intermediate Capital. 10 years ago, this was effectively an investment company investing in high risk and expensive mezzanine debt. They would lend companies money, perhaps on an MBO, at higher risk levels than banks were prepared to lend. Broking that story 10 years ago was hard work. The pushback from fund managers about the risk and the low risk adjusted returns was deafening. And yet the share price has increased some 415% from 300p to 1545p over the subsequent 10 years. 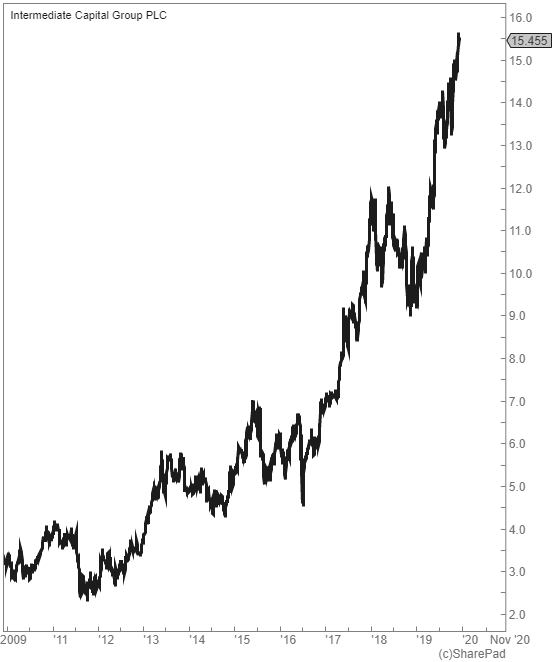 The PE back in 2010 was 9.6X and today it stands at 17.1X so over the period the valuation has close to doubled, but the shares have increased more than 5X implying that EPS must make up the difference in the gain. In 2010 the company reported EPS of 34.9p and in 2019 63.4p was reported. The company has benefitted from the double whammy of a re-rating along with growing EPS on the back of moving the company from a predominantly investment company to predominantly a fund management company. The risk has been moved into funds in exchange for a lower revenue from predictable fees that requires less capital and consequently the capital requirement reduces, enabling a re-rating as risk reduces and ROE increases. Companies have a way of fixing what investors complain about.

On a PE basis the newcomers look like they have potential to double while the high premium to book value of Intermediate Capital is evidence of the expectation of a growing ROE. Mercia Asset Management last week announced a deal to acquire NVM (previously known as “Northern Venture Managers”) and consequently there are no forecasts in the market. It appears this is a space where change is happening that doesn’t hit the headlines, such as a good fund gating. 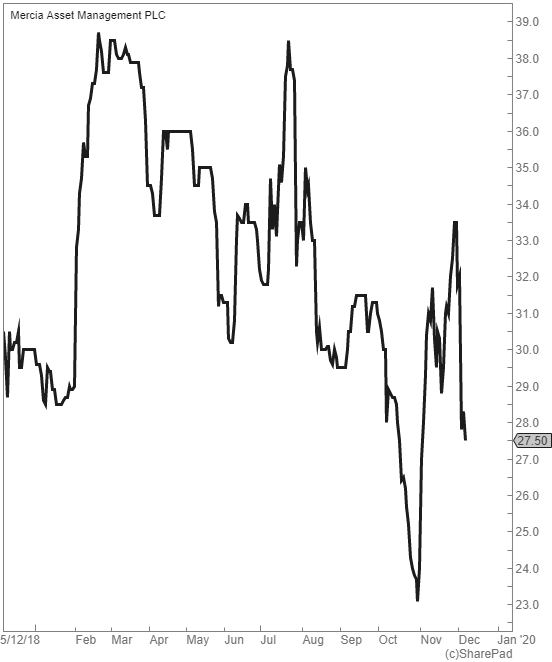 The company was started by Dr Mark Payton who is CEO today and is an Oxford Academic from the department of Pharmacology. Previously he had leading roles at four companies within Oxford University Innovation, 3 of which were sold, and one listed on NASDAQ. The company came out of another quoted vehicle IP2IPO run by David Norwood in 2010 and was listed on AIM in 2014. At IPO the company was backed by Woodford and the new custodian, Link Fund Solutions still shows as having an 11% stake. Invesco also have 19%.

H1 2020 results to September were released last week where the revenue of £5.5m was outweighed by operating costs creating an operating loss of £864m. It was the £3.2m of investment gains that created the profit of £2.1m. The company is therefore sub scale to create an operating profit. Last week the company announced the acquisition of the VCT fund management business from NVM which consists of 60 investee companies and £270m AUM. The total consideration was £26m of which £16.6m is payable up front in a mix of cash and shares. The acquisition multiple looks good value at 6.25X EBITDA of £4m. It also moves the company into a useful level of profitability going forwards.

If we annualise the H1 operating loss of £864k the proforma operating profit would be £1.7m. The net asset value of £128m produced £3.2m of profit in H1 which annualises at a 5% return. Given the fund management business requires very little capital the return on capital (pre amortisation, share based payments and tax) will accrete from 5% to c 8% with this transaction thus meriting an element of re-rating while the risk is also reduced. The market cap is £84m while the net assets are £128m so the shares trade at a discount to asset value. The company is raising a further £30m of equity to finance the transaction so the market cap will increase to north of £100m when it enters a universe of new investors.

There are currently no forecasts but if we assumed the share capital post the fund raise is 430m shares that would provide a pro forma market cap of £120m for NAV of £158m which is a a24% discount. If we taxed the pro forma profit at 18% we gat PAT (excluding share-based payments and amortisation) of £4.6m which is c.EPS of 0.9p. This is not a forecast and includes guess work so don’t take it as anything more than an illustration. But if that was the case the shares would trade on a PER of c 30X which is expensive.

The shares are expensive on a PE basis but trade below NAV. I am tempted to ignore the fact they are trading below NAV given the company has just issued new shares below NAV so on a PE basis the shares look expensive. In short, I think the valuation is not in sync. with their capital allocation. 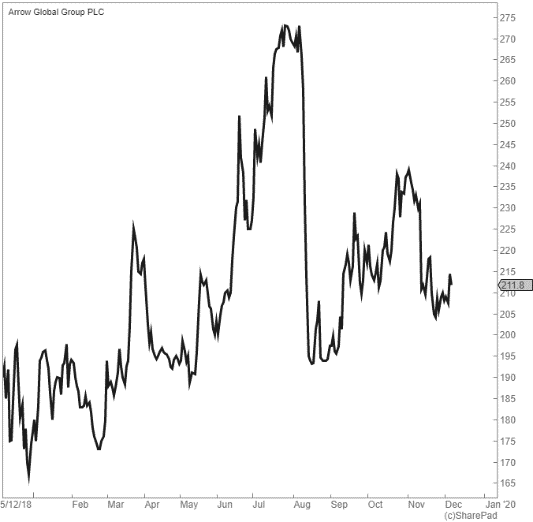 The company listed in October 2013 at 205p/share, close to the current 212p, valuing it at £357m. The RBS special Opportunities Fund sold around a third of its shareholding at IPO. The business buys distressed consumer debt from banks and credit card companies typically at 10p in £1. At September 2013 the loan assets on the balance sheet were £258m and with debt of £215m the equity was £54m, representing leverage of 400% of equity. The accounting requires an assessment of the collections over an 84 month and 120 month period before the company decides what income to take into the income statement and hence is very reliant on directors assessments. At the same time debt markets are well known for becoming overheated at times. These two factors have led the hedge funds to take short positions and the market, having been initially enthusiastic about the high returns available, now is concerned about the risks.

Which is why the company has launched its asset management strategy where the volatility risks can be laid off in funds providing investors in the equity with a more reliable fund manager fee income stream. Today fund management revenue accounts for 21% of Arrow Global’s revenues.

The shares trade at 5.5X 2020 Eps and yield 6.8%. The ROE is 29% and the Price/NTAV is 1.5X. Generally, I have a rule of thumb whereby a company should trade at 0.1-0.15X the ROE so that would suggest a market valuation of 2.9- 4.3X NTAV. The shares are cheap, but with the traditional leveraged distressed debt model that may be expected. As a fund manager it may not be.

The fund management business achieves a 22% operating margin and accounted for 17% of the profits in H1 2019. AUM are c £52bn which if we annualise the H1 revenue yield c. 26bps revenue. This is low margin and low fee rate so extrapolating fund manager comparators would suggest a valuation of 0.05% of AUM of £26m. That is 7% of the current market cap so the fund management solution is early days. 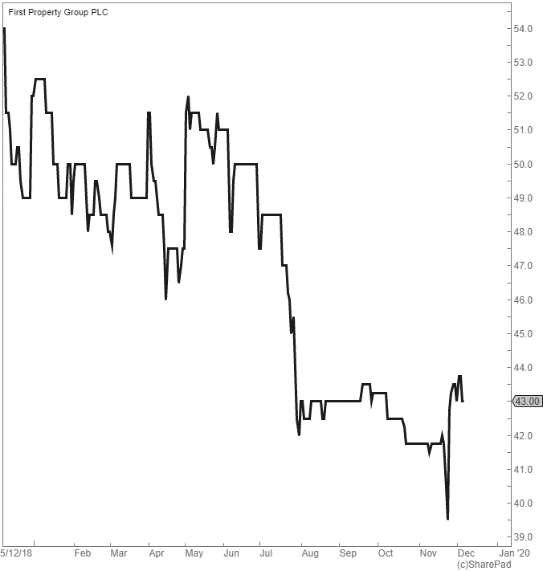 Originally this business came out of the Universities Superannuation Scheme “USS”. They placed Polish and Romanian properties in the portfolio and had a majority shareholding at IPO. Today the largest shareholder is Ben Habib, the CEO and Brexit party MEP for London, who owns 13.2% while USS is no longer a holder. The strategy is moving towards UK property as well as the fund management solution. The company has offices in London, Bucharest and Warsaw.

H1 results on 21 November showed a NAV of 59.65p/share but unusually for a property company the company hold its properties at the lower of cost and market value on the balance sheet. When adjusted to market value the NAV is 86.7p. This equates to £67m, while the company now manages £602m of properties in funds from which it earns fund management fees of c 0.6%.

The company reported £2.98m PBT from £8.1m revenue. 22% of this revenue was derived from fund management and 20% of the profits. The company won no new mandates for fund management in H1 which may be disappointing for those hoping this division to grow but it is a large market and mandate wins may be sporadic.

A sum of the parts valuation may be appropriate here. The Fund management company has £602m of AUM delivering £3.56m of annualised revenue. The underlying profit margin on this division is c 37% which is high margin and an analysis of comparators for this type of margin fund manager would suggest a valuation of c. 4% of AUM or 7X revenue which is £24m. That means that at the current price investors can buy £67m of on balance sheet property for an underlying £24m (if we strip out the value of the fund management company from the market cap). That’s a 65% discount to the NAV. The PER of the company is 10.7X and the yield is 4%.

It appears that this company has a fund management company that is reasonably significant but is overlooked by the market. I like the low PER, the discount to NAV and the sum of the parts upside. I own it and am pleased I do.

Fund management is undergoing slow but seismic change as passives, ETF’s and other products take an increasing share of investors savings. The market is polarising between those with scale and those who are very specialist. And a new generation of specialist fund managers are emerging who from this change from existing investment companies where the markets high regard for low volatility fund management fees offers rich rewards for investors. First Property looks set to benefit. From the current valuation there looks to be 50% upside when the markets believe it while Arrow Global is at an earlier stage and so is riskier, but also has potential huge upsides over time.