The liquidation of Nautilus Minerals caught my eye last week. This was a company which was to be one of the first underwater miners aiming to recover gold, silver and copper from deep water off the coast of Papua New Guinea. Such escapades are not new. In the 1680’s the government “found” some currency in a vault that hadn’t previously been in circulation, an early form of quantitative easing. The result of introducing this “found” currency was wild speculation. A company listed in order to “drain the red sea to recover the gold abandoned after the crossing of the Jews”. Other magnificent speculations included the “Company for the Sucking Worm Engine” which aimed to produce a fire engine and many wreck salvaging companies with ingenious diving bells. All this frivolity is now unwinding.

The result of the bubble in the 17th century was the passing of a law in 1697 to “refrain the number and ill practices of brokers and stock jobbers” whereby their number was restricted to 100. Today our stock markets are shrinking. Estimates range from 1.5% a year in the US to much faster rates in the UK and Germany. On Aim the number of companies are close to half of their 2007 peak. This steadily reducing supply of listed equity is not matched with a corresponding fall in demand. Indeed, with longer life spans and later retirement equities remain relevant for a longer period of people’s lives.

The reasons are numerous. Low interest rates have made equity look an expensive form of finance for a company relative to debt. Regulation has focused on lowering costs but setting correct share prices involves research and independent thought which costs money. The result has been increasing passive investment. And as passive investment crowds into slow growing larger listed companies the fast-growing sectors are being sucked into private markets. Companies stay private for longer and the regulator is now focussed on keeping investment in these businesses away from open ended funds following the Woodford issues. Stock markets are becoming smaller, safer and duller.

Spotting this issue some private equity companies have launched closed end funds where the high growth of private companies can be accessed by market investors through closed ended funds. Just as the first investment trust launched by Foreign and Colonial enabled the masses to take advantage of overseas investment when it was launched in March 1868. In a similar vein a number of these high growth companies that elude stock markets can be accessed through perhaps Draper Esprit or Augmentum Fintech. 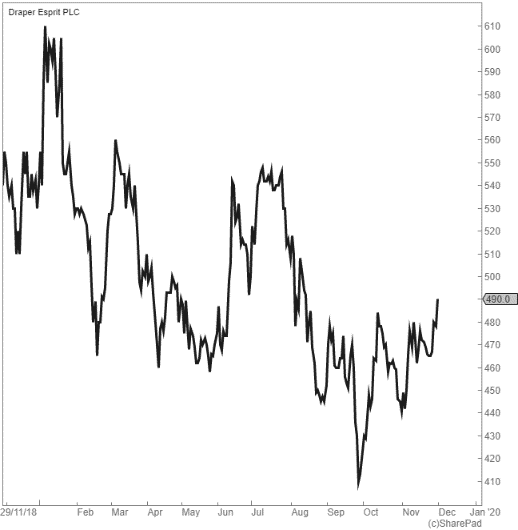 Draper Esprit is a private equity firm focussed on innovative tech, entrepreneurs with global potential. The businesses they invest in are high growth, efficient models in the consumer technology, enterprise technology, hardware and digital health and wellness space. The Plc was floated on AIM in 2016 in order to provide investors with access to the high growth companies who are now staying private for longer. The team manage 3 vehicles, the Plc, and EIS and a VCT. Companies are invested in for the long term rather than on a typical 5-year cycle and exits are only made when companies reach maturity or when they have established a strategic position in their ecosystem. 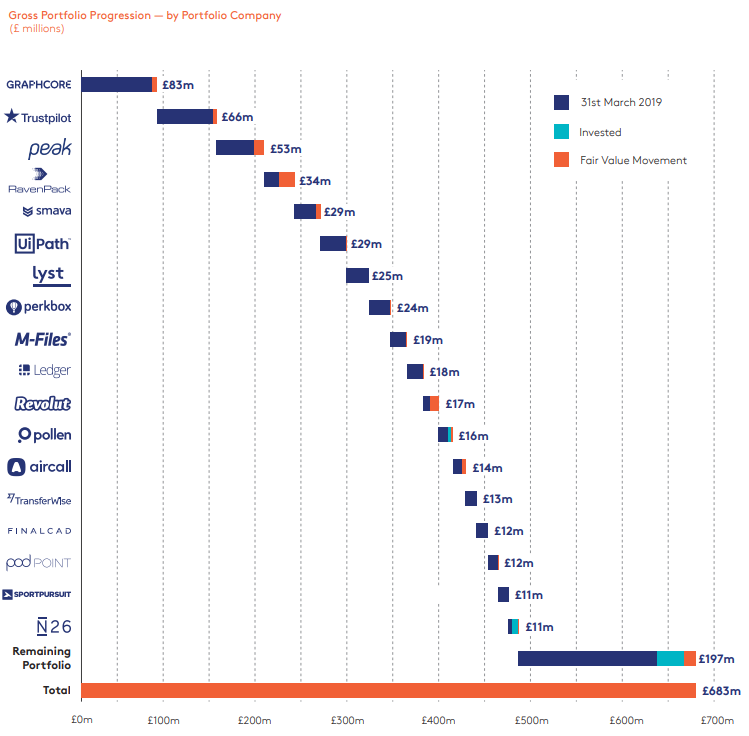 A review of the top 18 investments at companies’ house is below: Many are overseas based but for those based in the UK only one is profitable – Transferwise. The largest holding, Graphcore, accounting for 12% of the gross asset value has turnover of only £1.1m while it lost £61m in the year to December 2018. There are a number of high-profile investors alongside Draper Esprit such as Microsoft, Merian, Dell and Bosch, but it would appear the valuation could be described as “optimistic”.

Interim results last week reported the gross portfolio value had grown 15% over the 6-month period to September to £683m while the net asset value had increased 9.4% to £677m. £20m of debt was drawn down from a £50m facility to provide some modest leverage.

The Net asset value is 574p so at 481p the shares trade at a 19% discount to the net asset value. There are no dividends

The ticker code for this stock is “GROW” which is enjoyable. While the valuation of the fund is a reasonable discount to NAV the valuation of some of the underlying companies is hard to verify. With the Graphcore holding being worth £83m while it loses $62m with $1.1m of revenue there are reasons to be nervous. 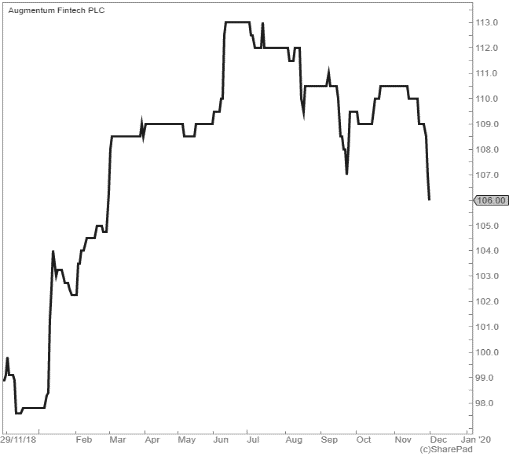 Augmentum was brought to market in February 2018 at 100p/share to generate long term capital growth from investment in private high growth fintech companies. Tim Levene heads up the team who had co-founded Crussh the chain of juice bars and was a founding employee at Flutter.com The investment team had managed such investments since 2010 through a limited partnership backed by RIT Capital. The company quoted an unrealised IRR of 28% on its seed portfolio at March this year.

The company has recently delayed the publication of it interim results pending the grant of a full banking license to its largest portfolio holding, Zopa. Last published NAV was 109.6p/share at March 2019 or £103m. Since then it has raised a further £25m at 112p/share and announced an uplift in valuation of £4.2m on an investment in Tide. The net asset value may there by in the region of £132m, or 117p/share. The estimated portfolio is below:

Zopa is the largest holding, followed by Tide and Interactive Investor. A review of companies’ house data reveals the following revenue and profit/loss figures:

Zopa is the largest investment and Augmentum own 6.2%. That suggests a valuation of c £350m for the company which is 9X revenue. When we consider that revenue reduced by 12% between 2017 and 2018 this looks high. The Sunday Times led with an article yesterday that in order to obtain the bank license Zopa was raising £130m at a “big discount” to its fund raising round a year ago. Augmentum have postponed their interim results last week pending clarification of Zopa’s valuation.

The investment in Tide is through convertible loan notes which when targeting growth seems an unusual instrument where some valuation protection is provided in the short term at the expense of future upside which is not what we would expect for a long-term high growth capital gain investor.

Since IPO the NAV increased 10.7% in the year to March 2019. The charges investors must pay for the management of the fund amounts to some 2.1% of the fund. Investors at the IPO are up 8% in the 18-month period which may be disappointing for those who expect high growth investment to produce high returns.

The September NAV is not yet announced but were it to be close to my estimate of 117p the shares trade at an 8% discount.

It has been said that at least risky investments can only go down 100%. The implication being that it only takes a few 500% winners to eradicate the losers and provide a good return. That could well apply here. Some look like winners and some look like losers. But with interim results delayed there is the risk of a down valuation on Zopa which could lead to the discount to NAV widening. 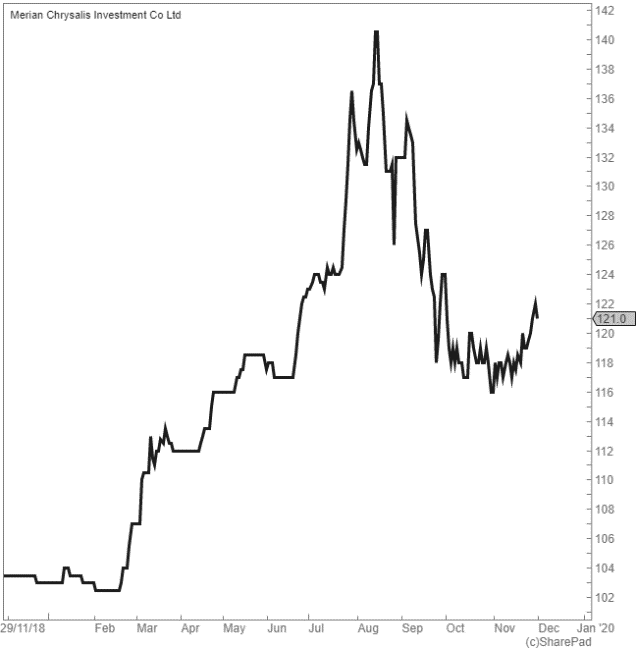 Merian Chrysalis was set up by the former Old Mutual fund managers Richard Watts and Nick Williamson who rebranded from Old Mutual Global Investors to Merian Global Investors in July 2018. The initial fund raise was £200m. The purpose of the company is to capture the value in high growth pre IPO companies, citing that between 2011 and 2017 the average age of a private company doubled to 10 years.

The last announced results are the half year results to March 2019. The net assets were £108m at that point invested in 5 companies. Since the shares were trading at a premium to NAV since then the company has raised a further £275m and consequently is still investing the monies.

A search of companies’ house data reveals the following revenue and profit numbers:

The company has only been listed for 16 months so original investors have received a 20% uplift since then. However, the return on the total investment of £375m is only 8% as significant monies have been invested at a premium to the net asset value. The management fee is 0.5%, paid monthly though there is a 20% performance fee on top.

It appears to me that the reason that stock markets have been shrinking is simply that money is cheaper in private markets and so valuations are higher. It is starting to unwind and these investments could prove to be damaging to wealth.

Stock Markets are shrinking. While companies stay private for longer the investment industry is persuading investors to invest through investment vehicles to harness the growth in private companies. There is no evidence that these vehicles are enabling investors to obtain the excess returns said to be in private companies. One of the biggest risks seems to be that private company valuations are high and so this could just be a consequence of the misallocation of capital by virtue of quantitative easing. While I had hoped these vehicles might provide access to elusive opportunities it may well be that they are just a symptom of an era of cheap money. I shall be sticking to quoted companies that are surprisingly good value. Sometimes it right to stick to the old-fashioned rules. There will be a time these funds make good shorts.