The Cult of Equities

Each week that passes my excitement is building. Value is coming back. I have felt like a fish out of water as what appear to me to be millennials tell me I am crazy not buying the latest hot stock on a PE of 45X. And these millennials are buying their new Tesla while my diesel Golf flashes its dashboard at me like a fruit machine whose 3 melons have finally lined up. More evidence that value is starting to matter arrived as Urban Exposure received a restructuring proposal from Robert Tchenguiz last week aimed to reduce the 25% discount to NAV at which the shares trade. I have noticed some of those shares I own that trade at discounts to net tangible asset value quietly creeping up on no news flow, such as Just Group which is up 90% from its August lows on no material news flow, which is always a reliable sign of a change in the markets wind direction.

I find myself wondering if this could be a long-term change in direction. Rates have been in decline since 1981 illustrated in the graph below. 1981 was the best time to move into bonds and in fact it was a time when pension funds were largely exposed to equities when pension funds should have been in bonds. In fact, at the time they were more equity exposed than they had ever been. It was George Ross-Goobey who joined the Imperial Tobacco pension fund in 1947 who first publicly made the decision to move out of government bonds in 1955 as they were yielding less than inflation. Today government bonds yield less than inflation. It proved to be an astute decision as inflation gained pace over the ensuing 30 years. He persuaded the pension fund to invest 100% of it pension assets in equities arguing that investing in dividend paying equities with the scope for those dividends to grow in line with inflation would be better for the fund. Many other British pension funds followed this lead over the coming years. 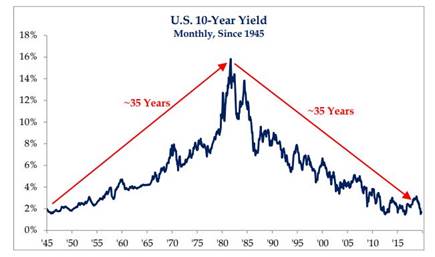 This has reversed over recent years. The peak was 1993 when 80% of aggregate UK defined benefit pension scheme assets was invested in equities. By 2000 it was 70% and 44% in 2014. Pension funds have been moving back into bonds and according to the pension protection fund the major part – some 55.7% – of UK pension assets were in bonds in 2017. Boots pension fund was the first one to return 100% into bonds in 2001.

These bond exposures are of course an attempt to reduce risk. But risk and reward are generally accepted to be inversely correlated. So, they are low return. In 1955 Ross-Goobey switched into equities on account of the low returns, and today most pension trustees are more concerned with risk than reward. Looking at the graph above a rational person may suggest that the probability is that the next change in asset allocation will be someone noticing that perhaps inflation is increasing and the returns on these bonds aren’t going to give the trustees the outcome they desire and perhaps they should consider some equities. It was 1971 when Ross-Goobey made a speech to the national association of pension funds referring to the “cult of the equity”. It could be that in a few years’ time we start to hear that term uttered in the newspaper once again.

The catalyst for this of course is inflation which is not apparent in government figures yet. But governments do use the figures that suit them. And they adjust the figures to suit their purposes. The most ridiculous inflation adjustment I have come across is the equally stupidly named “hedonic adjustment”. An example of a hedonic adjustment would be that the price of a TV has gone up 10%. But because the TV is now a smart TV it is deemed to be 10% better and so inflation is stated to be zero. This bears no relationship to the fact that no one is able to buy a TV at zero inflation so bears no relationship to the money we as consumers have to spend thus rendering inflation statistics worthless.

In the same way that accountants can’t fiddle numbers forever, the same principle applies to inflation statistics. Eventually we all start feeling so poor that we get riots and demonstration and rebellion votes, and the system starts to break. And eventually the underlying undeclared inflation will I suspect start to show through at which point we have the return of the cult of the equity.

Back in 1955 the US federal prime rate was 3%, which subsequently rose to 20% in 1980. Today it is 5%. Base rates are something that Warren Buffet uses to determine whether he should buy equities. One of his quotes is “Charlie and I haven’t bought an IPO since 1955”. I suspect this is a time we should be buying IPO’s, just as there are very few happening at the moment.

The great investors of 1955 were of the value style rather than the growth style. Buffett in the US, Ross-Goobey in the UK. They didn’t pay a PE of 45X for a growth stock. The bought value stocks and practised patient investing. And in recent weeks these value stocks have started to come back to life. They liked profitable companies that pay dividends that grow and good old-fashioned things like that. They also like a good Return on equity.

A search of AIM stocks on SharePad’s filter function (find out more about creating these in this tutorial) may reveal some good old-fashioned stocks for the long-term value investors. The filter criteria I have used are:

Only 7 stocks on the whole of AIM fulfil these criteria. The list is here in market cap order.

The share price graphs of these companies illustrate just how out of fashion these companies are. And a lot of them are cyclical businesses. Cyclical businesses are something that the new generation of investors aren’t used to dealing with as the money has all been directed at structural growth. The market mood is changing and if inflation is coming back with the prospect of upward pressure on interest rates cyclicals will perform. These charts below illustrate how unpleasant the prospect must appear to most investors. 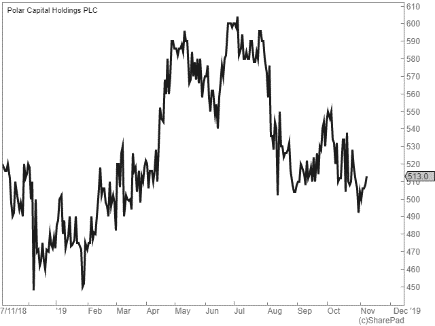 With performance fees on nearly all the funds and very specialist fund this fund manager tends to trade in large long swings as the cycle of performance leads inflow which lead profits. The small net outflows from the funds has caused the shares to come back but performance remains good. This could be an opportunity. Though we always need to be aware that in a bear market we want to own no fund managers. 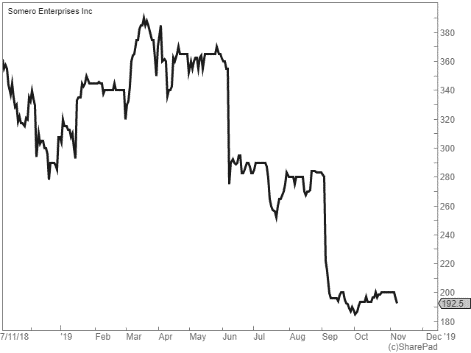 This US concrete screed machine seller has been a stellar performer over recent years. It is a US company distributing globally and the operational gearing is huge. Hence it has this year warned on the back of weakening demand. H1 results showed revenue down in the US, Europe and China and, not being aware of a global recession there are reasons to worry that the growth spurt may be over for a long period of time. 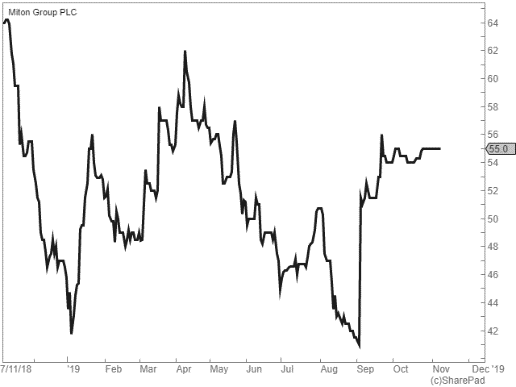 The shares have been weak following underperformance from the small cap funds run by Gervais Williams and some modest net outflows. The company is merging with Premier Asset Management which dilutes the influence of Gervais Williams while the cost synergies of the merger will add 27% to pro forma profits over 2 years. This looks interesting, but it is also a geared play on the market. 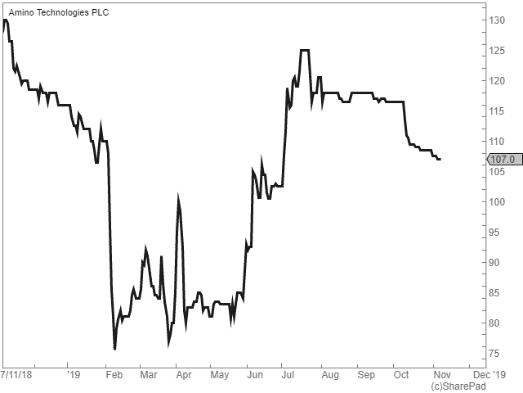 This American company uses language that makes it difficult to understand such as “upcycling legacy devices”. 50% of sales are into the US and there are apparently outstanding opportunities, but the rating suggests the market doesn’t believe that. Market conditions said to be “challenging”. Personally, I don’t understand their markets well enough so will avoid. 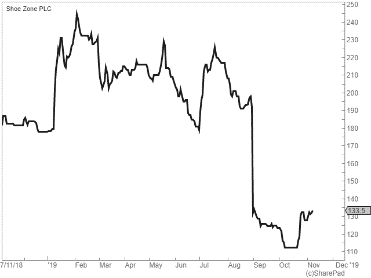 This value retailer of shoes has 500 stores and in August delivered a profit warning alongside the departure of its CEO and a write down in freehold property. The digital and “Big Box” format offering are being rolled out though they are only 7% of revenue each yet. It is possible a new CEO may dig up another downgrade after coming in but with a strong balance sheet this retailer may be an interesting recovery play. One for my watchlist to buy on an incoming CEO’s downgrade. 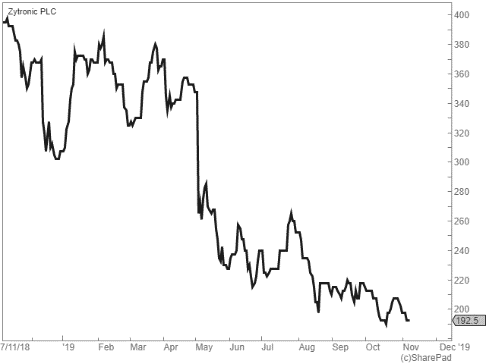 This is a manufacturer of touch sensor products from 5-inch panels to 85-inch panels. The company operates out of 3 factories near Newcastle. The company makes an operating margin in the region of 20% and achieves a ROE of 11%. The company supplies the Financial, Gaming, Signage and Vending sectors. The company warned in October last year and again in April this year on the back of slow order conversion in the gaming sector. Historically the company has made 20% ROE suggesting they may have some competitive advantage. I would need to meet the company to understand whether the competitive advantage is sustainable but if it is this could be an opportunity. 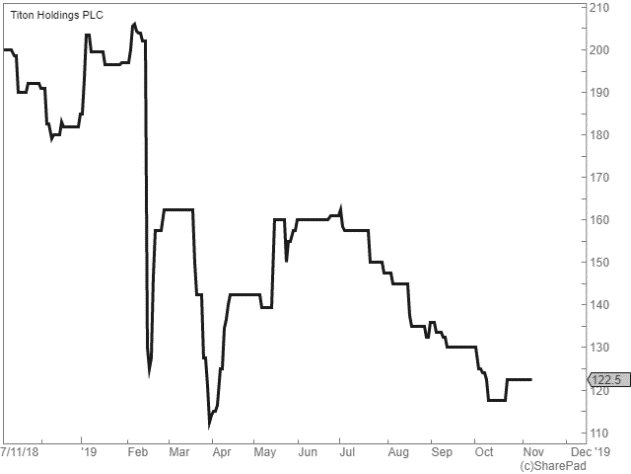 This manufacturer of ventilation products derives c.60% of its profits from South Korea and c.25% from the UK. Korea has experienced a slowdown in the housing market and the company was forced to restate it profits due to the incorrect recognition of costs. The ROE is approaching 15% and the company has net cash of £3.8m. It is perhaps the low liquidity of this £14m market cap stock that would preclude me looking at it as a recovery play. But it may well be.

Using very traditional value screening from Sharepad I come up with 7 stocks all of which are experiencing some cyclicality of differing kinds. We haven’t had much cyclicality over the last 10 years as the economic cycle has been very benign and this could be a time to be dusting down traditional cyclical/value investing skills that we have left in the cupboard over recent years. Of the 7 stocks I personally group them as follows:

I am sure this is a time when pension funds are invested in low and negative yielding bonds that we are at a multi-year turning point and in two years’ time I expect they will start re allocating to equities. With this comes a return to traditional value style investing which puts me back in my comfort zone. A Sharepad filter looking for low debt, solid net asset value, cheap stocks with good returns turns up just 7 stocks on the whole of AIM. All of these are exposed to cyclicality, so market timing becomes important again, unlike the last 10 years when declining interest rates have driven growth stocks to high levels. The merging fund managers, Miton Group and Polar Capital look interesting. Somero, Shoe Zone and Zytronic could also be right, though there is still a risk of being too early for these three.