Across the table in the rather tired looking meeting room, the grey haired but immaculately presented fund manager bit his bottom lip as he prepared to disclose something – telling me he was uncomfortable about what he was about to utter. This was probably the important part of the meeting. He is a high priest of small company value investing and runs a fund designed to capitalise on the fact that small companies have a liquidity discount in their valuation. The explanation he delivered was that he is now required to report to his investors very regularly the number of days average daily volume it would take to liquidate his fund – meaning he must avoid very illiquid stocks. As a result, the company he was in front of would not be included in his fund. Of course, this was uncomfortable for him. The very basis of his fund is to capitalise on the undervaluation opportunities at the bottom end of the market.

Perhaps Woodford was a catalyst for this enhanced liquidity aversion but regulation and legislation also has a part to play. Wealth managers are now being required to place clients in risk rated buckets according to their risk tolerance requirements. These requirements are often a portfolio of funds and if in direct equities – large cap stocks. At the same time fund managers, by definition professional investors, are increasingly in dangerous territory with illiquid stocks, leaving a widening gap of unloved stocks in the small cap world.

Dr Paul Jourdan of Amati Global Investors published a statement on liquidity on 20 June arguing that liquidity can be achieved but at a price, which is true. However, this ability to achieve liquidity has declined post the inception of Mifid 2 legislation. This legislation requires fund managers to pay a broker separately for trading and for research instead of bundling the payment into commission. The result is that commission rates have declined and so brokers are no longer incentivised to pick up the phone to generate commission thereby creating liquidity. Amati published their liquidity buckets evidencing how long it would take to liquidate their smaller companies fund which is below:

This analysis is in fact of no relevance in practise because the moment that we tend to need liquidity is the day that it disappears – a fact that northern rock depositors may have contemplated as they queued outside the closed doors on 14 September 2007.

This reduced commission incentive for brokers to create liquidity has resulted in institutional brokers attempting to make up the lost revenues elsewhere by increasing company retainer fees thereby increasing the costs for a company to be listed. As a result, small companies face the perfect storm of a reduced pool of institutional investors to buy their stock and higher costs, low market volumes and increasing reporting requirements.

The results of this are now becoming evident:

This is producing a seismic shift in small company markets from institutions to retail investors. Since the peak of AIM in 2007 while the number of quoted companies has almost halved, the value of shares traded has declined only 15% while the number of trades has increased 170%. The higher volume of small trades is evidence of the increasing influence of the retail investor which the struggling institutional brokers are not engaging.

In every change lies opportunity and the resulting lack of appetite for small companies is presenting the retail investor with a fabulous opportunity to help these liquidity averse institutions out of their difficulty.

Liquidity is very low in the sub £20m market capitalisation space suggesting that is a place to hunt. A SharePad filter for companies below £20m which are profitable narrows the list to just 40 companies and of these 40 only 14 trade above net asset value thus evidencing the undervaluation of illiquid companies. Remember this is for profitable companies that we can buy below the value of the assets. This veritable smorgasbord of cheap stocks will no doubt contain some that are in a bad state but in the bilge of AIM there will be some small diamonds. The 40 stocks from SharePad are listed below in Price/NAV order: 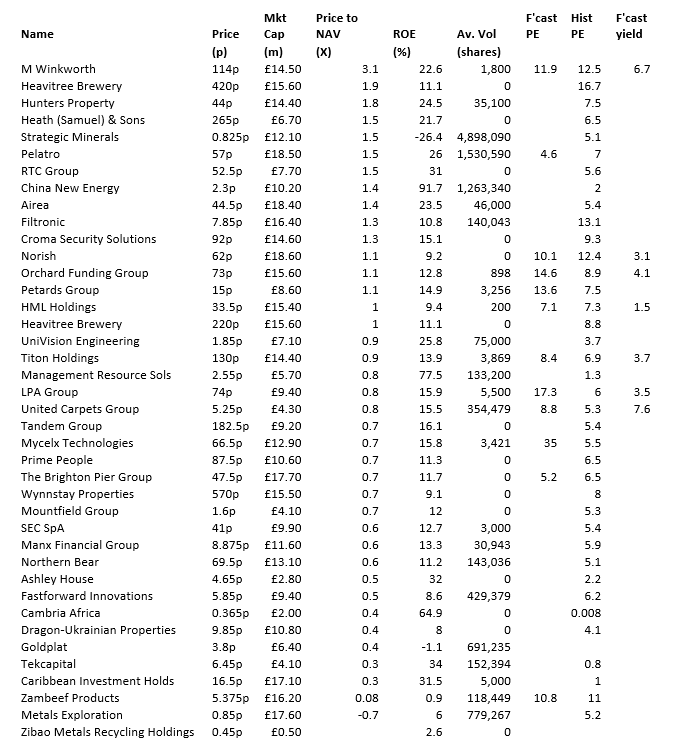 Many of these companies have two significant risks:

One company which appears to have a diversified shareholder register as well as a controllable amount of debt is Brighton Pier Group. 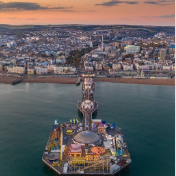 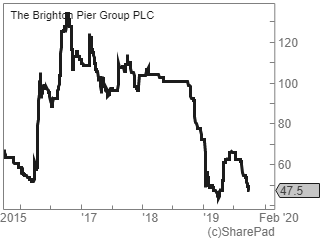 This company was previously Eclectic Bar Group until 2016 when it acquired Brighton Pier by way of a reverse takeover. It was re-admitted to AIM on 27 April 2016 with Luke Johnson taking a 22% stake, which has subsequently become a 27% stake. At that time investors such as Miton, Tellworth, Legal & General and Cavendish invested to finance the acquisition since when the chart above tells us it hasn’t been plain sailing. In September 2017 the company reported a more than doubling of its EPS to 10.9p and in December 2017 the company carries out a £3m placing to acquire Paradise Island Adventure Golf for £10.5m, a multiple of 8.7X historic EBITDA, and 6.25X targeted EBITDA.

The company has 3 divisions. Brighton Pier is the UK’s 5th most popular leisure destination with 4.7m visitors per year. Eclectic Bars operates 14 premium bars targeting sophisticated student midweek and stylish over 21’s and young professionals at week-ends. Brands include PoNaNa, Lowlander, Embargo Republica, Smash and Coalition. The third division operates 7 indoor mini golf sites in high footfall locations such as Glasgow, Sheffield, Cheshire Oaks and Rushden Lakes. The strategy of the company is to grow organically to realise synergies and to be a consolidator within the sector.

In January 2019 the company issued a profit warning after the period end stating that the bars and the pier had underperformed guiding PBT expectations down 18%. Golf was trading in line, while the reasons given for bars downgrade was refurbishments taking longer than expected and weak Christmas trading. The Pier was suffering due to the London to Brighton rail disruption reducing the number of Brighton visitors. This seems particularly relevant as rail works tend to be carried out over week-ends when there are less commuters so bus replacement services are generally provided. If I was going to Brighton for the weekend and there was a bus replacement I wouldn’t bother. While forecasts went down 18% the shares fell c50%.

On current year EPS the share trade on a mouth-watering multiple of 5.2X, though no dividend is expected. It would appear that if this forecast is achieved the rating will not be 5.2X and then the market cap will be larger and the liquidity improve opening up the company to a wider audience of liquidity averse investors, and so the spiral reverses. With the railway upgrade completed in May 2019 it may be reasonable to expect more visitors to Brighton this year and the recent August bank holiday weather was the hottest on record which will have benefitted Brighton. The delayed refurbishment will now be benefitting trading and there is one recently opened golf course to contribute to results as well as one planned opening for October.

The balance sheet is a risk as the company has £15m of debt facilities. £13.3m is a term loan from Barclays Bank with £1.5m repayable in the next 12 months and £1.5m of debt is an ongoing revolving credit facility which is scheduled to decline to £1m by March 2020. The company needs to repay £2m in the next 12 months. Last year the cash generated from operations was £3.2m which is in line with the operating profit – as one would expect for a leisure business where consumer pay up front. The capex was £2.4m, ahead of the £1.5m depreciation charge as the company was investing. Whilst the bank debt is high at 3.1X reported EBITDA, for a cash generative business such as this it doesn’t appear to be cause for concern.

I am struggling to find the problem with the numbers. The profit warning appears understandable and the reasons that earnings should recover are also visible. The valuation looks like a function of its small and neglected market cap rather than fundamentals. The one reason I can find not to invest is an emotional one. I don’t actually like their bars. They are just not for me.

We are in a time when small illiquid companies are facing a liquidity crunch when institutions are increasingly neglecting illiquid companies while regulation and legislation is keeping wealth managers from investing in the space. The result is a gift for the self-directed retail investor where they can pick up good companies at attractive valuations. We may look back at this time and think what a golden era it was for bottom fishing. Brighton Pire Group could be one of those opportunities on a multiple of 5.2X. If only I liked their bars.