Sometimes it can be useful to stand back and take stock so we don’t get those market eyes that can’t see the wood for the trees. It seems with the abandoning of the WeWork IPO the bubble may be drawing to a close. We have had such bubbles before. In the 1680’s there were some very silly companies floated such as the “Company for the Sucking Worm Engine” – which aimed to produce a fire engine. My favourite was a company that listed in order to “drain the red sea to recover the gold abandoned by the Egyptians after the crossing of the Jews”. But market recovered their normal condition soon after just as they will this time. The FTSE has been range bound for two years now. We look like we are around the middle of the range and the question is what next? 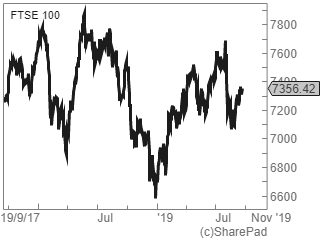 To predict the future let’s look at the past

The world never quite turns out how we expect it to. It is always “different this time”. A good example is banks in the early 2000’s. In almost all previous banking collapses what caused a problem was banks lending money secured on property or other infrastructure and then discovering that their estimates of values and future cashflows were overly optimistic. If an analyst had published a research note in the year 2000 predicting that house prices would treble over the next 10 years, but that RBS, HBOS, Lloyds and Northern Rock would collapse the analyst would have been carried out by medics. Yet it did happen.

I found this fascinating comparison of how prices have changed since 1970 in the Guardian last week. 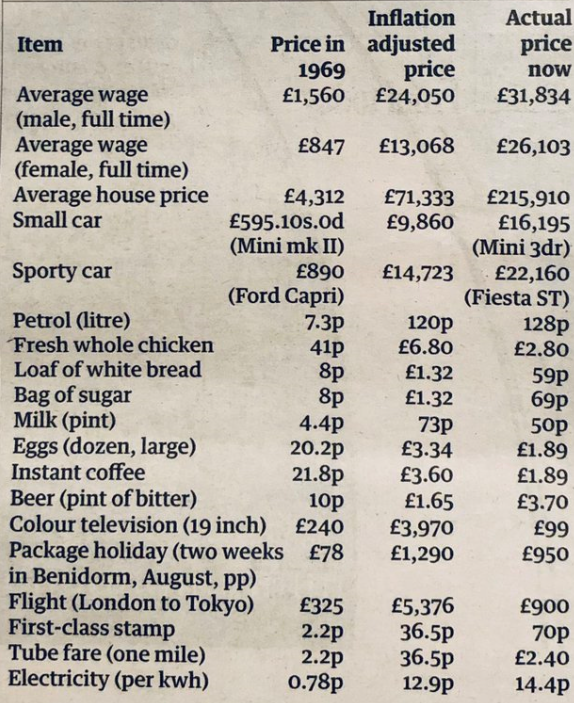 I think it is unlikely that in 1970 not many people would have predicted that the average house price would appreciate 16.5 X over the subsequent 50 years while the stock market index of the day, the FT30 index would appreciate 7.9X. We would all have abandoned investing in the stock market and built buy to let portfolios had we known. Or the less energetic may have bought shares in housebuilders.

I find it a useful reminder that things we think are unlikely to happen frequently do.

If we look forward another 50 years today it may be there are other investments, such as stamps, coins, or perhaps vintage cars which may well outpace property or shares. I find myself suspecting that as we move to driverless cars the value of driving a vintage car will increase.

It seems likely the technology revolution will change the way we work, bank and save. The advent of open banking, whereby computer algorithms can crawl through our bank statements and give better financial outcome predictions than mere humans the world of financial planning and lending may well come together. Certainly, I would appreciate an email from my bank telling me I am likely to go overdrawn in 2 weeks-time and they can offer me a loan which is priced for the risk their algorithms detect from my 20 years of bank statement history. The market will end up with bespoke tailored loans and savings products which suit perfectly our financial needs. This makes for lower risk lending as well as better prices for consumers.

In that world analysts will no longer monitor credit losses as capital will be perfectly allocated. With efficient capital allocation there will be less need for fund managers too. The environmental report will be more important than the accounts. It is really a very exciting future to look forward to, but a very long way from how things operate today. The square mile has always been and will remain a place where humans interact, but the purpose may be to decide which new environmental factors to adjust on the robots rather than to allocate capital. Today we have Robo Advisers and Robo Funds but Robo Banks, Robo Foreign Exchange Products and Robo Lawyers will ultimately arrive.

This entire edifice of bureaucracy layers is now under threat from the three drivers of technology, regulation and legislation. These forces are now accelerating what I suspect will be a substantial change in the way we manage our money over the next 50 years. Those that adopt technology will win, others will consolidate, and some will fail.

Meanwhile some of the incumbents are looking increasingly like dinosaurs

I find myself wondering if last week’s acquisition of Smith & Williamson by private equity changes the landscape irreversibly for the older incumbents. Now they have a similar amount of client assets as Brewin Dolphin and Rathbone they are in a position to challenge using price and technology with their vertically integrated offering.

Companies House data tells me that Tilney makes a higher operating margin than any quoted wealth manager at 38% while in typical private equity style the balance sheet has been stripped out as it carries £345m of debt, which compares to Brewin who had £139m of cash at the March 2019 half year. Brooks Macdonald had £35m net cash, while Rathbone is a conservatively geared bank. This ability to leverage with private equity style debt will enable them to continue to acquire while the incumbent operators look increasingly vulnerable. The acquisition multiple for Smith & Williamson last week was 12.6X adjusted EBITDA which makes Brewin Dolphin look cheap. Private equity could potentially strip out the cash and introduce significant amounts of debt. 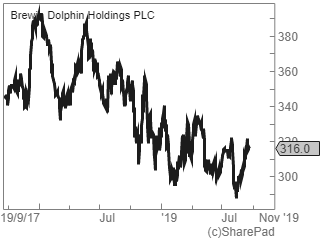 This is not a very good-looking chart. Investors could be forgiven for using the word “dog”. And yet the valuation is now starting to look interesting, particularly with private equity predators in the space. It has very sticky customers who have £44bn of AUM which deliver to Brewin recurring annual fees which last year amounted to some £233.9m, or some 71% of total revenue with the balance being made up from commissions or financial planning fees. That is a very attractive asset.

Over a 10 year view the chart doesn’t look so bad and it tells a story. 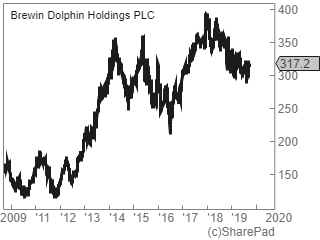 The current CEO was a non-executive director in 2012 and came in as CEO in 2013 following which the IT systems were overhauled, the pricing proposition was formalised and the staff incentives were aligned creating a margin improvement to their currently guided 20%- 25% which delivered a strong share price performance. Since then the shares have traded sideways as the new structure and systems were bedded in and the company transitions to growth. Today the shares trade below where they were in 2014 despite the profits having grown from £39.7m to £64.2m last year. The de-rating has occurred as wealth management is a difficult business to grow. At the interims in May the company described the annualised discretionary fund net inflows of 4.3% as “another period of strong organic flows”.

In order to bolster this growth, the company has been investing in new initiative as well as acquisitions.

These initiatives have included:

Against this backdrop of investing in the business client appetite to invest has been on the wane across the industry (see flows chart below) which has resulted in a de-rating and declining share price.

From the valuation table, below we can see that Brewin PE is middle of the range while by the year to September it has the highest PE amongst its peers because it is forecast to grow slower. This is precisely why I personally would choose Brewin Dolphin as the investment pick of this peer group. Analysts generally forecast using straight lines extrapolated from the past and Brewin has been growing slower. The investments made over the last couple of years should provide scope for forecast upgrades. Couple that with a very useful yield above 5% and the insurance policy that if the growth doesn’t come through it makes a very attractive acquisition target and I am feeling rather attracted.

It appears to me that Brewin Dolphin has for the last 5 years been struggling to transition from a margin expansion story to a growth story. This has involved significant investment and in my experience periods of investment in a companies’ lifecycle tend to coincide with poor share price performance. Once the benefits of the investment start to become apparent, evidence through faster earnings growth, share prices tend to respond, if the investment has been worthwhile. If the investment has been poor investment, which is possible there are plenty of predators that would like to acquire Brewin’s client bank. Both outcomes could be good for shareholders

I suspect that the savings industry may well have reached “peak bureaucracy”. This makes the clients very sticky but also it adds inertia to the savings industry making the businesses very sticky but also harder to grow. Meanwhile technology is coming together with pricing pressure persuading several firms to consolidate or vertically integrate. The combination of structural change, plentiful private equity money and strong embedded franchises makes for a potentially happy investing experience.