I find myself increasingly bullish. Or maybe I have recently had a holiday and by the end of the week all bullishness will have gone.  Seemingly macro fears have led to risk aversion. The FTSE 100 is 7.7% down from its peak in May 18, while the FTSE Small Cap index is 18% down over the same period, and AIM is down 21%.  By and large earnings have gone up over the same period. I am now struggling to see a huge recession coming, particularly if we are to get a fiscal injection as Boris throws deficit caution under the bus.  The result is perhaps some nice cheap stocks at the smaller end. This liquidity aversion is aided somewhat by the events at Woodford.

The valuation of value stocks relative to growth stocks has now reached a level that exceeds even the dot com bubble in 2001. 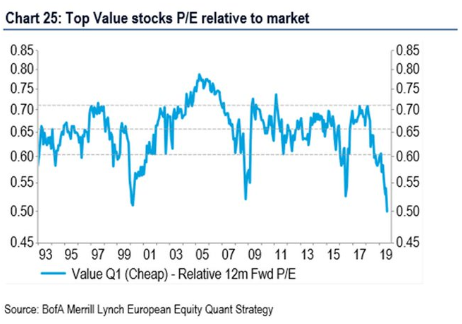 While the first signs of a break-out of value stocks are apparent: 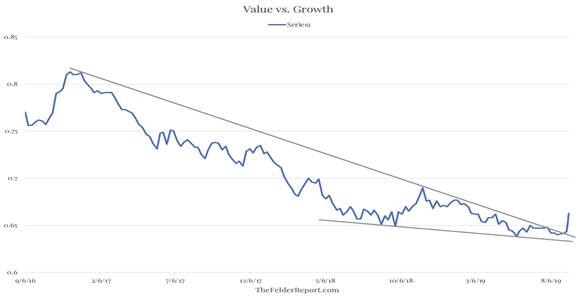 What is the catalyst to make value come back into fashion I find myself wondering, or perhaps it will be like 2000 when nothing happened other than value stocks just got too cheap?

With low interest rates set to continue the value of structural growth becomes exponentially higher and those low interest rates look set to continue. And in the meantime, value stocks have continued to drift backwards in the ebbtide of investor attention. A floating stick in the ebbtide will eventually reach a bend in the river which pushes it out into the middle again reversing its trajectory and it is inevitable that an external event will ultimately change the direction of movement of value stocks in this market. A stock that drifts too low will ultimately get taken over and so M&A activity is a reliable indicator sign of a market bottom. Sterling weakness is driving overseas buyers towards our exchange at the same time as investor neglect is delivering low valuations and on cue last week south African based Growthpoint launched a partial offer for Capital and Regional the same day as the Hong Kong Stock Exchange made an offer for the LSE. The day before Bovis Homes and Galliford Try agreed a deal to merge their housebuilding divisions. Morrisons reported respectable results last week and declined to comment on takeover speculation.

But what about that Europe thing?

It is quite a pantomime. Possibly the world may end as some doomsters predict but markets have a wonderful corrective mechanism called “pricing”. We have seen this in action where sterling’s weakness encourages M&A activity. Now we have a change in ECB leaders from Draghi to Lagarde. Draghi’s 8-year term is coming to an end with a resumption of bond buying and cheap loans for banks, which has engineered the bubble in asset prices instead of inflation. He has now asked his specialist departments to explore other options for the future. According to the German paper “SZ” they are examining whether the ECB could buy shares on the stock exchange in the event of an emergency as well as the possibility of acquiring unsecure bank bonds. In addition, the idea of central bankers directly transferring money to the citizens is being looked at. Christine Lagarde will clearly take a fresh look at all this but in her hearing before the European Parliament she said citizens interests should be taken into account and that people should understand why central banks do certain things. This is new and it is conceivable it could give rise to a long-forgotten mood of optimism.

A good example of these currently inefficient markets is Premier Asset Management who announced a merger with Miton last week.  The deal included £7m of cost synergies before we start to consider some distribution benefits. In the context of Premier’s £18m PBT estimate for September 2019 and Miton’s estimated £8.3m PBT to December 2019 this is a reasonably material cost saving number. Given the new company will be 70% Premier, 30% Miton the cost saving alone could be 27% enhancing to Premier shareholders.  Admittedly it takes 2 years to deliver the savings, but Premier shares are modestly down since the deal.

Possibly the market doesn’t think the cost savings will come through. Possibly the increased liquidity in the stock, the increased diversity of the funds and the distribution synergies will amount to nothing.  Or perhaps the share price is wrong.  While I am sure some will find it depressing, for those with a sunnier outlook on life it may be an opportunity.

When buying value stocks, it is important to understand them well so I apologise for leaning towards the Speciality Financial stocks that I have known and loved (or otherwise) over the years. I have found myself taking a fresh look at some stocks that have fallen heavily and without the hindrance of hindsight bias which clouds our ability to change our minds I find myself looking at some stocks that could very well double over the next couple of years. Stocks that have heavily sold off who I know reasonably well are listed below. I have put a brief comment by each of my current view, which of course may well be wrong (and frequently is).

It is always so easy to get carried away with the story and suffer from “style drift” as Woodford seems to have done. With that in mind I suspect that Premier Asset Management is a very straightforward one which because it is in a bid period currently all the analysts are restricted from writing on it under the takeover rules so there could very well be an opportunity for the retail investor to steal a march on the institutions. I met with both Mike O’Shea, CEO of Premier, and David Barron, CEO of Miton last week, escorted by a corporate broker to confirm no privileged information was disclosed at the meetings. They did confirm that there are currently no unconflicted analysts able to publish currently, so I wanted to share my thoughts with ShareScope readers. 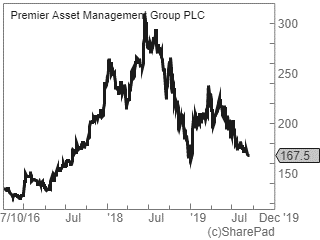 Premier Asset Management is a fund manager with £6.7bn AUM at 30 June 2019, of which 68% are held in what has been termed “multi-asset” in one of those dreadful industry terms that I prefer to think of as “fund of funds”. Back in 2011 Premier had £2.1bn of AUM from which it earned a revenue yield of a healthy 1.17% giving £2.5m revenue. At this small scale the company was barely profitable at the underlying level. Now with £6.7bn AUM the company reported revenue of £53.4m last year having experienced 24 quarters of net inflows. Revenue margins have been robust at 73 bps while the operating margin has expanded to 39% as the company has gained scale. PBT was £15.9m last year. The company only came to market at the end of 2016, and in June 2019 momentum ran out as the company experienced its first net outflow after 24 consecutive quarters of net inflows.

The operational gearing of scaling a small fund manager is striking at the profit level. Two other factors are remarkable here. Firstly, the scaling has been achieved without sacrificing revenue yield. Secondly that the momentum has been so consistent until 2019.

This is a great example of what can happen to small fund managers. Note the momentum continues for a long time when it finally arrives.

Premier has announced an all share merger with Miton whereby Premier acquires Miton for 0.30186 Premier shares for each Miton share. At the current share price of 167p that values each Miton share at 50.4p but Miton will also pay a special dividend of 4.9p pre-merger so Miton’s read through valuation is 55.3p per share while it currently trades at 51.5p. Consequently, there have been a number of hedge funds using leverage to arbitrage that margin by buying Miton and selling Premier since the deal was announced on 4 September.

The synergies on this deal are clear and substantial. There are costs savings of £7m, distribution synergies which are a little less clear cut and there is a reduction in the fund concentration risk.

As a consequence of the deal all forecasts have been withdrawn. However, the PBT forecast for Premier to September 2019 was for £18.5m PBT and £8.3m for Miton which amounts to a combined £26.8m. If we included only the cost synergies (which admittedly take 2 years to materialise) we get to a pro forma £33.8m, some 26% higher. Post the deal there will be 158m shares in issue. If we assume an 18% corporation tax rate that would imply pro forma EPS of 17.5p per share once the cost savings are achieved. This does exclude the exceptional costs which are estimates at £10m. This is a high number but there is no clarity provided as to how they are derived, and I wouldn’t be surprised if this was one of those numbers the accountants have over provided for.

This theoretical pro forma EPS number would put the shares on a PE of 9.5X. Premier has the admirable habit of paying a quarterly dividend. Their policy is to pay a progressive dividend using prior year as a base line. Last year Premier paid out 10.25p and given that post the deal the combined company will have in excess of £30m net cash on the balance sheet it seems reasonable to expect an improvement. If the dividend was only maintained that would represent a yield of 6.1%. The market capitalisation post the deal at the current price would be £263m. With £30m cash that would equate to an enterprise value of £233m which is 2% of the combined AUM. Jupiter, which has some woes at the moment trades at 3.3% of its AUM.

What amazes me here is that the shares have actually gone down on the announcement of the deal which was announced on 4 September. See the chart below. I find very hard to accept that the company post the deal is worse than the company before the deal. Clearly that’s not the view of the largest two institutional investors in Miton, Axa and Artemis otherwise they would not have signed the letter of intent to accept the offer. It could be that investors don’t believe the cost savings will be delivered. Or perhaps the increased liquidity in the stock, the increased diversity of the funds and the distribution synergies will amount to nothing. Or it could be that the lack of coverage combined with nervous markets make this an inefficient market. I know which of those I think it is, but its up to investors to decide. 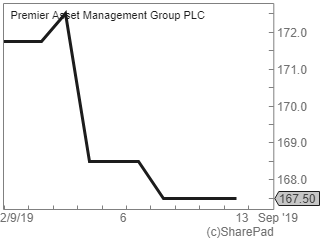 The market is gloomy while value has shown signs of outperforming. With Brexit soon to be behind us (possibly) and fiscal injections from Boris alongside changes at the ECB I can’t help but feel more bullish. In the less liquid end of the market post the summer holidays it appears that the aversion to risk may be bringing about some market inefficiency. We can object to that or we can try and capitalise on it. It could be there is an opportunity at Premier Asset Management while all the analysts are restricted, and the deal is not yet completed.

Until the court hearing date and the FCA approval has been received it isn’t possible to be certain when the deal between Miton and Premier will close but a reasonable expectation may be end of October/early November given the deal was announced on 4 September.