I found myself wondering whether models become outdated over time. In this age of diversity, governance reporting, and gender indexes I question whether our parliament using whips may be a little outdated.

When I was at university, business models were those of manufacturers, distributors and retailers. We didn’t have “Bricks and Clicks”, “Freemium models”, or “Dropshipping”. The internet has enabled businesses to adopt an increasingly capital light model. Which could lead us to question the future of stock markets. The stock market was initially invented to finance the enormous cost of financing trips for the East India company which involved assembling ships with crews including armies that were bigger than the national army to plunder the overseas “territories”. As businesses become increasingly capital light the need for pooled capital to finance these ventures reduces. We may be seeing this in action now with many of today’s unicorns remaining in the private environment for longer.

And yet the flipside of these capital light models is the higher returns on capital available to investors. As the function of a stock market is to allocate capital efficiently the rewards available today are potentially higher with these new business models, but it is harder to access them as many remain privately held.

Franchising is now a well understood version of the capital light model whereby franchisees capital is harnessed in order to generate high returns for investors. The difficulties encountered recently by Domino’s Pizza remind us however these businesses are not immune to normal business cycles such as growing pains and supply chain disruption. I suspect with Domino’s this may have occurred as the company has strived to continue to deliver growth in a saturated market rather than settling for high return on capital and so become a high return cash cow. This is a common risk in stock markets when management can be seduced by the illusion of growth at the expense of high returns. Provident Financial is a good example.

Other quoted businesses adopting the franchise model include the letting agents; Belvoir, Property Franchise Group and Hunters. The ROE on Sharepad for each of these companies is below:

Generally, any ROE above 20% which can grow is a good investment but companies need to be careful not to push growth too far. I wish that analysts talked about ROE instead of PER. But analysts have traditionally been incentivised by commission, so they have been trained to focus on valuation rather than the strength of the business. In the same way brokers are paid to raise capital for growth and so emphasise growth over returns, while the shrewd investor will allocate their capital to the high return business rather than the growth business.

Against this backdrop I find myself wondering about two potentially high return business models which are at an earlier stage of development but could well emerge as tomorrow’s winners.

Aquis Exchange Plc With innovation in business models accelerating I would also like to take a look at the exchanges space where despite being at the hub of our financial world a new incumbent Aquis Exchange has come up with an innovative model that could also be the future of exchanges. 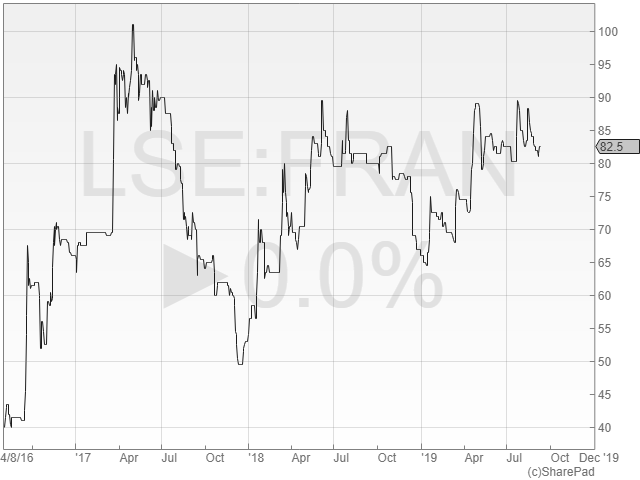 This is a company founded in 2008 by a collection of individuals who are aware of the capital efficiency of franchising. A look at the shareholder register shows some interesting names

Nigel Wray has many interests but was a significant shareholder in Domino’s Pizza so co-founded Franchise Brands with Stephen Hemsley who led Domino’s Pizza to IPO and was CEO for a number of years. David Poutney was an early founder of Numis Securities and was broker to Domino’s Pizza while at Numis. He has subsequently founded Dowgate Stockbrokers who are joint broker to the company. The vision is to create a group of complimentary brands who share the same centralised services. Today the company has 450 franchisees in 12 countries across 4 main brands of Metro Rod, Oven Clean, Chips Away and Barking Mad. The business was admitted to AIM in August 2016 at a market cap of £15m and in 2017 acquired Metro Rod raising a further £20m.

This drainage and plumbing business has 42 franchisees and provided £2.5m EBITDA in 2018. The franchisees are dependent on head office for systems as well as sales leads. The company targets £110m of systems sales having delivered £37m in 2018.

Traditionally a van-based car paint repair operator the business has now been transitioned to Car care service centres and fees have been changed from fixed fee to turnover related. The business has 204 franchisees.

In H1 2019 the EBITDA generated was as follows:

Metro Rod is clearly growing nicely with a respectable EBITDA from only 42 franchisees. With a new sales and marketing department appointed in early 2018 and with Metro plumb having now reached critical mass I am tempted to believe this division can achieve the £110m of system sales perhaps by 2023 which is what the strategy envisages. More modest growth is expected from Chips Away, Barking Mad and Oven Clean which operate in niche areas and some of these brands are in a state of transition currently.

Forecasts anticipate £4.8m EBITDA for 2019 and with the company having delivered £2.5m in H1 this implies a reduction in H2 which looks extremely conservative. Note also the fading of growth rates going forwards. Usually as a franchise model starts to work the growth rate will tend to accelerate rather than slow – so this looks a very conservative expectation.

The company also experienced upgrades in April this year.

On the face of it a PE Ratio of 20X for 2019 is very full when the yield is only 1.1%. However, with a growth rate of 33% anticipated it is more a question of how far forward the valuation is looking. The Metro Rod system sales have, in the managements view, the potential to reach £146m from £37m in 2018 an increase of 295%. Management service fee is the fixed monthly income (either fixed or a % of turnover) paid by franchisees and accounted for 61% of turnover in H1 2019. I suspect that the share price is anticipating earnings around 18 months ahead which appears a reasonable valuation to me.

The reality is the currently low ROE of 10% will expand as the franchises mature and with higher ROE comes a higher valuation so in fact the valuation risk could well be on the upside rather than the downside. 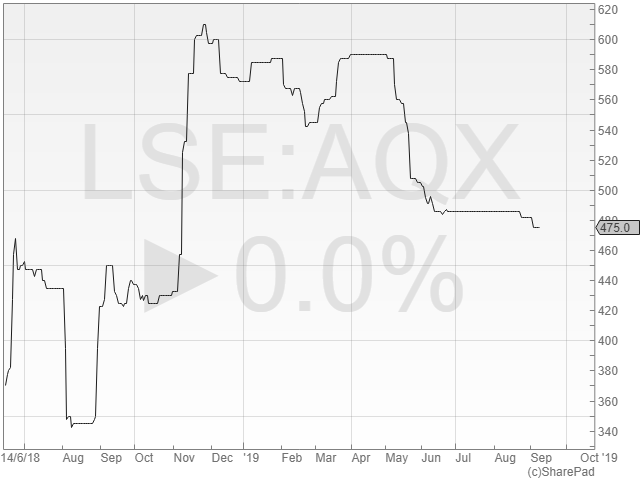 Just occasionally we meet a company and come out feeling inspired. It seems the world is exciting again and the sun will shine until JK Rowling reinvents Voldemort. The learning we get from CEO’s is invaluable. They are all exceptional in their different ways and to benefit from their knowledge is one of the great privileges of the city. Which is how it was when I met Alasdair Haynes, the CEO of Aquis Exchange.

What it doesn’t tell you in the report and accounts or in the investor presentations is that he got his inspiration moment in a Vodafone shop in Tunbridge Wells buying a phone for his son. Once he had recovered from the volume of texts his son alleged, he needed to send each month he explored the subscription plans. In the end he decided he would opt for a very simple phone that would charge per text. Which set him thinking that in the world of exchanges all transactions are paid for per trade. No exchange offered a subscription model which would clearly be more attractive to the high-volume users of an exchange. And if you then offered no frictional costs of trade at all the velocity of trade would increase thereby increasing the market size.

And yet with derivatives of interest rates, commodities and equities having multiplied this huge increase in trading volume hasn’t brought about a subscription model. Until now with Aquis Exchange.

The attraction of mobile phone style subscription models is evidenced by other sectors and companies. The visibility of revenues enable the companies to be rated higher than a simple trading model, while we are increasingly living in a rental economy. 86% of new cars were bought last year on finance contract plans, rented housing stock continues to increase and we pay monthly for our phones, computers, books and movies. Yet – incredibly – it hasn’t arrived yet at the London Stock Exchange.

The company is however at a very early stage of development and with exchanges liquidity attracts liquidity so there is a natural “winner takes all” law of the jungle. It isn’t easy to go up against the London Stock Exchange. The company IPO’s in June 2018 at 269p/share raising £12m. For the year to December 2018 it reported £4m of revenue and lost £2.7m, and had £11.6m net cash. The trading members had increased from 24 to 27 over the period. The company also licenses its technology to other market which are non-competing such as metals exchanges as well as selling its market data. In May 2019 it updates the market that it had achieved a record market share of pan European equity volume of 4.7%. While it is a subscription model with monthly subscriptions varying from £2k to £50k/month it isn’t possible to directly correlate monthly volumes with revenues the company suspects that if it doubled its subscriber base it would reach break-even.

On 5 July this year the company announced the acquisition of Nex Exchange for £1, plus £2.7m for the working capital. This company is the smaller competitor to AIM. Regulation of this exchange is directly by the exchange rather than the responsibility of the Nominated Adviser on AIM and consequently is lower cost. Companies however are still obliged to retain a corporate adviser.

I have found in recent years that NOMAD fees have been going up sharply. One of the unintended consequences of Mifid 2 is that commissions for brokers have reduced sharply and so to maintain their profitability they have been increasing annual retainers for companies. It may just be that their timing of this acquisition is fortuitous and that AIM Nomads are starting to price themselves out increasing the popularity of Nex as an IPO market.

Broker forecasts anticipate the company reaching profitability next year at which point it will still have £10m of cash on the balance sheet.

The valuation is full at 25X the anticipated EPS in 2021. But a new model exchange is a very valuable asset once it is profitable. Ci-X Europe was founded in 2007 by Instinet and achieved a 27% market share of FTSE 100 trades by 2011 when it was sold to BATs for $305m. Alasdair Haynes was the CEO of Chi-X at the time.

The company is currently loss making but if it can indeed become profitable as forecasts anticipate it time being quoted will be short. The innovative business model will dictate that a competing exchange will be obliged to buy Aquis before it takes their market share. Based on the Chi-X example investors could anticipate perhaps a 300% return in 3 years. That is if they can gain more market share. This is a binary call. But 300% upside and 100% downside could be reasonable odds.

We are in a world where business models enabled by the internet are proliferating. We have the experience model, the subscription model, the freemium model, etc etc. None of these models prioritise capital usage as purely as the franchise model. And after all the purpose of capital markets is to allocate capital to the areas where returns are optimised. No one knows this better than the board of Franchise Brands. In the meantime I hope very much that Aquis Exchange succeeds in bringing modern era business models to the world of exchanges.