One of the things the City of London excels at is selling its own to overseas acquirors. Back in the day Messrs Wasserstein and Perella sold themselves to Dresdner Bank to create Dresdner Kleinwort Wasserstein which didn’t seem to end very well. Warburg sold themselves to Dillon Read until the swiss arrived and they all sold to UBS. Credit Suisse had already acquired Buckmaster and Moore in 1987. Merrill Lynch had bought Smith New Court and HSBS had bought James Capel and Samuel Montague. The blue blooded Cazenove was one of the last to hold out from the advances of overseas acquirors until JP Morgan finally bought them in 2009.

A particularly canny deal was the sale of 58% of Artemis in 2002 to the Dutch bank ABN Amro. In 2008 financial distress forced the sale of Artemis and was sold to BNP Paribas’ Fortis Bank triggering a payment of $558m for the 37% of Artemis still owned by staff. BNP Paribas then became a forced seller so in 2010 the staff and Affiliated Managers Group”AMG” “helped” Fortis out of their problem and bought the company back. The deal price was undisclosed, but AMG said it was at the low end of the range – between 8- and 10-times EBITDA. Based on the 2007 accounts at company’s house this would value the business at £434m-£542m which is not far above what the management received for their 37% stake less than 2 years previously.

I find myself wondering if we may enter an era when the rest of the UK sells itself to overseas acquirors. KPMG reported recently that the volume of private equity deals in the UK was down 35% in H1 2019 because of uncertainty over Brexit. If this is the case, there must be money waiting to be deployed as private equity has been raining funds this year. There are normally three things required for a good old-fashioned M&A feeding frenzy:

Perhaps we should take each of these in turn.

The Sharepad charts show that £ is close to a 20-year low against the US$ while against the Euro we haven’t quite reached the 2009 level, but it is getting close. 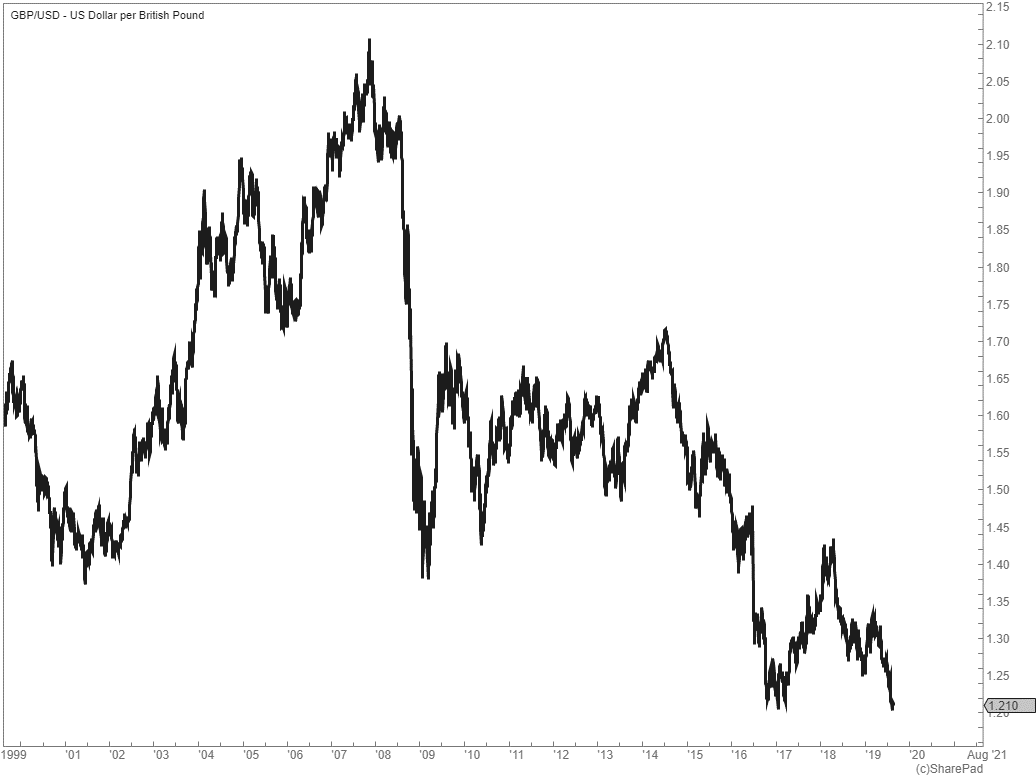 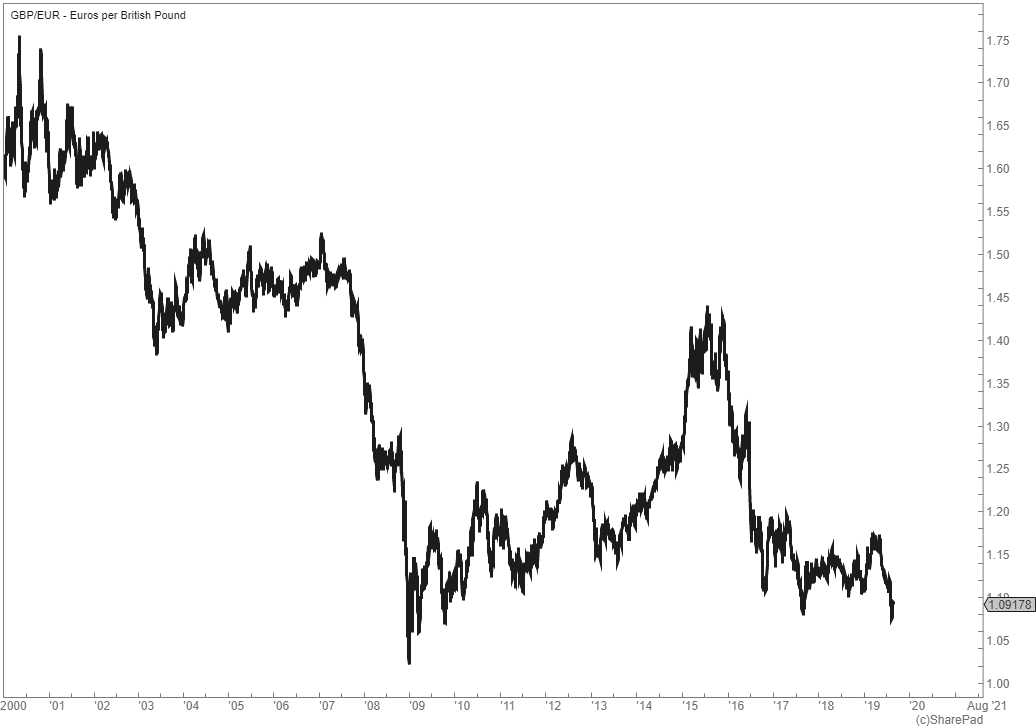 This weak sterling will make UK companies far cheaper to a US buyer who is using dollars or a European buyer using Euros. While many Asian economies have pegged their currency to the dollar for several years it probably fair to say the same principle will apply to Asian countries. 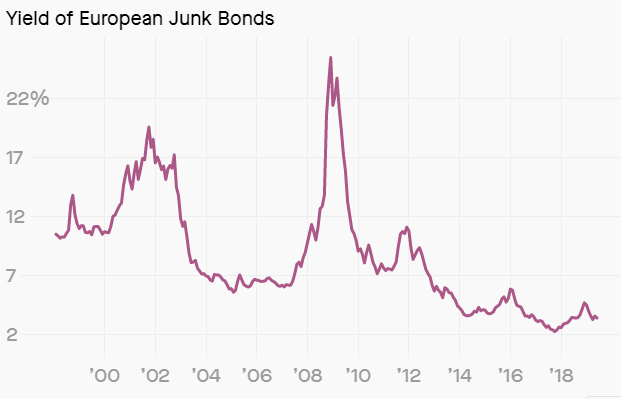 We are a little short on confidence at the moment but potentially post Brexit this could improve significantly. Trade Wars and Trump Tweets don’t help confidence. The Purchasing Managers Index (“PMI”) illustrates this well. This is a monthly survey of new orders, inventory levels, production, supplier deliveries, and employment which are equally weighted into a business confidence index. Below we can see that manufacturers have less confidence that Services, but both are well down on a year ago. 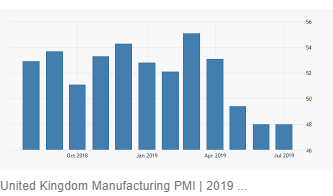 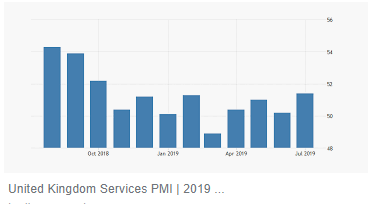 It seems likely that when confidence returns the ingredients are in place for a huge M&A party. M&A in the UK has increased over recent year but if we strip out a couple of very large transactions such as Vodafone selling Sky and the underlying levels are below the 2007 peak while the volume of money has expanded. As investors we need to be positioned for this phase of the market. The table below shows the “inward” M&A since 2000 which is companies acquiring into the UK. 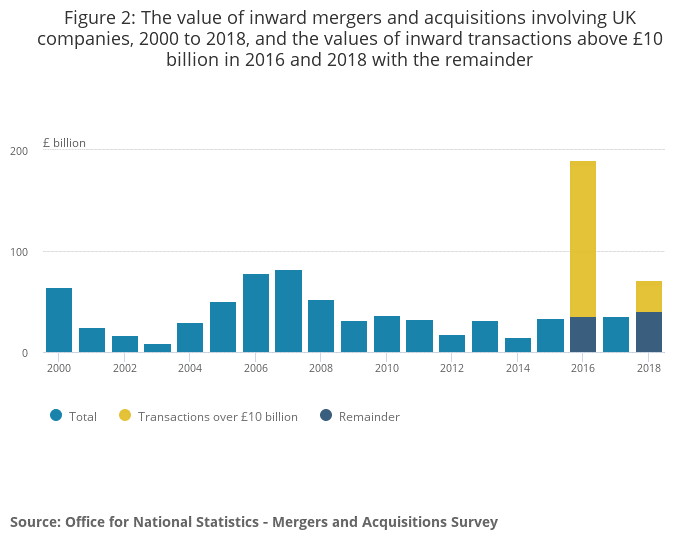 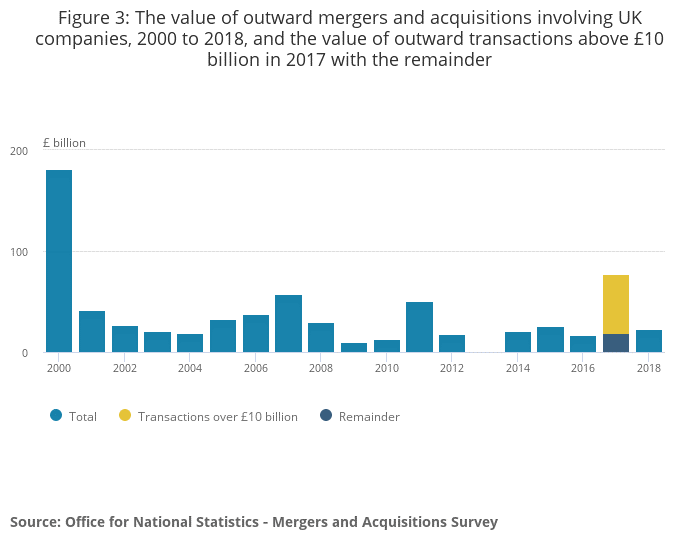 The great sale of UK assets to overseas buyers may just be starting.

What has happened recently?

In order to determine which sectors and ultimately companies might be attractive in this environment it is worth looking at the takeovers that have happened this year. Below is a table. 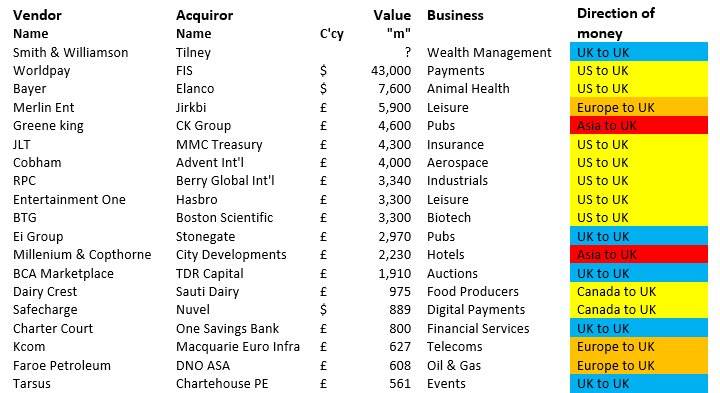 There are a few things to notice in this table:

The space to hunt for consolidation targets therefore looks likely to be:

These usually come in the form of a “value” investment. Which usually carry a risk of profit warnings happening while we wait for the predator to arrive. Companies that come to mind are:

2. Scaled players that provide a market position or a technology advantage to the US acquirer.

The valuations of these candidates are below in forecast PE order:

Company – The increasing PER tells us the profits are expected to fall in the current year to December 2019 as the company transitions to digital distribution online. As the space fragments advertising revenues become more competitive. The new competitors such as Amazon and Netflix are buying unique content to give them the eyeballs for advertising to. The company has a little over £1bn of net debt. It is possible this company could get taken over but that will depend on the strength of its content.

View – For me this one looks a little dangerous. The debt is only c.1.5X last year’s profits but I recall thinking how cheap Johnston Press looked, the regional newspaper publisher a couple of years ago. The risk of further profit warnings looks high to me.

Company – This company is cheap in PER terms but while the market cap is £1.5bn there is £2bn of debt on the balance sheet and a £200m pensions deficit. Greene King was taken over last week for £4.6bn enterprise value by the Hong Kong businessman Li Ka Shing. The company has over 2,700 pubs and outlets valuing the outlets at £1.7m each which were 81% freehold or long leasehold. A read across valuation to Mitchells & Butlers largely freehold 1700 pubs would proved an enterprise value of £2.9bn, which is below the Mitchells & Butlers current enterprise value of £3.7bn.

View – Perhaps because of the shareholder structure it seems a bid is fully priced into this stock.

Company – The threat from Lidl and Aldi the new discounters is significant. As a result, Morrisons has been re-engineering its model to become more competitive. Own brands have been introduced and stores re formatted, local products introduced and costs have been taken out. It has now resumed like for like sales growth. Net debt is £1bn while the property plant and equipment held on the balance sheet has £6.2bn of freehold and long leasehold land and buildings which provides a lot of comfort. opThe pension scheme is shown as an asset rather than a liability. The net assets of the company were £4.6bn at February which is above the current market cap of £4.4bn

View – This looks like an interesting takeover play. The shares are down 23% over the last year over supply worries on Brexit while the operating performance looks like it may be improving. It is possible that it could become a thorn in the side of the discounters necessitating them to bid for it. This will become more likely as the discounters current opening program starts to mature. It may be early, but this looks like one worthy of further research.

Company – After new management arrived in 2013 the returns have improved from this company but in a mature sector the targeted growth on discretionary assets is 5%. With increasing competition from both financial planners and self-directed platforms the company has increasing pricing pressure as well as competitive threats. The arrival of Tilney merging with Smith & Williamson bringing them £45bn AUM to rival £44bn of Brewin’s AUM brings an increasing threat. Tilney is private equity owned (Permira). With 723 of the 1,763 staff employed being in business support function the costs savings on a merger with Rathbone could be significant. In May the company raised £60m of equity to finance the acquisition of Investec’s business in Ireland.

View – The company will be busy integrating Investec’s business for a while, but the arrival of a private equity backed peer may live this space up. The price paid for Smith & Williamson (if it happens) will be an interesting benchmark. But with the shares down 18% over the past year the company now trades at under 2% EV/AUM. These companies normally change hands at 2-4% of AUM. Or another solution though a merger with Rathbone could create value.

Company – This high operating margin wealth manager has £49bn of AUM which is close to Brewin’s 44%. The same arguments for a merger apply as for Brewin’s with significant cost synergies across offices. Rathbone however has a new CEO who took up the post at the AGM in May. He is set to unveil a strategy to stimulate more growth in October which the analyst community are awaiting with bated breath.

View – Rathbone’s valuation is a market cap/AUM of 2.5% so higher than Brewin while the shares are down 16% over 12 months. It is however a licensed bank which it uses obligingly to offer very secure loans to their customer where they hold the assets in a portfolio. With a higher valuation than Brewin and fewer significant acquisitions available the strategy update will reveal much in October. For now, I am struggling to see it as persuasive as Brewin

Company – Having sold the Costa Coffee business to Coca Cola this year for £3.9bn and returned £2.5bn to shareholders via a buy back the Premier Inns business is now trading on a PE of 19. The company now has net cash on its balance sheet and suggests it can reinvest in further assets at strong ROCE. Thus, it is becoming a growth company.

View – The sale of Costa Coffee looks to have removed the takeover threat and the company in now on a growth strategy with a growth rating. That further suggests that the activist investors could start looking for the exit door. Not one for me.

With a weak pound, cheap debt and confidence amongst overseas buyers while structural changes in markets are accelerating it looks like the stage is set for a wave of corporate activity. Investors need to position for this. It looks to me as both Morrison’s and Brewin Dolphin may be good ways to play this theme. And while investors wait, they can collect a dividend yield in excess of 5%