In need of boredom

Equity investors need to be an optimistic bunch – since equity markets outperform over the long run. Academics Dimson Marsh and Staunton titled their study of 20th century market returns “Triumph of the Optimists”. But sometimes it’s hard. Like last Wednesday when Intu reported a decline in NAV/share to 252p and the shares dropped 41% to 43p. In the face of such consensus gloom it is hard to be optimistic.

I find the property sector useful for determining the macro outlook in markets. Unibail Rodamco Westfield, the owner of the Westfield shopping centres in Stratford and White City reported results on the same day as Intu and the shares fell also. This company can borrow money at 1% but the dividend yield on the shares is 9%. Usually a 9% yield would suggest the company is in financial distress. In this case that seems to have passed by the lenders who are happily lending at 1%. It seems the equity market is in a pessimistic mood while the debt market is optimistic and both of these can’t be right. I am inclined towards optimism so instinctively lean towards the equity market being overly pessimistic.

But how can the equity market be right?

Note: Due to some differing holding structures for assets the implied reduction in gross asset value is intended as a guide only.

We do have to question what property valuers are charging for their services when they value Hammersons properties 44% differently to the equity market at the same time as they value them 10% lower for Londonmetric. Londonmetric is focussed on distribution, which in this online world is a growing area, while Hammerson is focussed on shopping centres. It is telling that the penultimate page of their results presentation is titled “Beyond Retail”.

It seems the equity market is taking a view on the future value of portfolios of property while valuers merely tell us todays value. So, the question is whether or not Hammerson can convert its shopping centres into perhaps mixed use hotel, office, residential, shopping centres and create value or whether the property portfolio is in terminal decline. I will have a back of the envelope go at guessing the costs of conversion to alternative use.

The lettable area of properties for Hammerson is 2.3m square metres. Statista tells me that to build hotels costs anything from £2,500/sq. metre to £4,000/sq. metre while residential blocks would typically costs £2,500/sq. metre. The current balance sheet valuation of Hammerson’s properties is c £4,150 per lettable metre. So, the cost of rebuilding Hammersons portfolio is around 60% of the valuation of the estate which starts to make the implied 44% discount to today’s valuation look reasonable.

What would be interesting to see is the valuation basis use for the NAV. Normally valuers base their estimates on comparator transactions which must suggest that some people are overpaying for shopping centres today. The statistics tell us that not many are overpaying as there are less transactions.

There were only four transactions recorded by Knight Frank in Q1 2019 of which one was a sale by a receiver, BDO. Of the two largest transactions both were based on redevelopment valuations for changing the use to offices, hotels and residential.

It seems to me that the valuers are likely to increasingly base their valuations on redevelopment values which may imply some more downside, but there is a time lag for the transactions to take place. The share price of Hammerson appears to be anticipating 44% downside to the valuations. Last year Hammerson sold £570m of properties and targets £500m in the current year to deleverage. Last year’s sales were completed 7% below book value while this year Hammerson has sold 75% of a retail park at 8.5% below book value. This evidence suggests the 44% downside implied in the share price is excessively gloomy. But no one cares today. They never do when a stock is at its darkest hour.

For those value investors taking their bravery pills there may well be money to be made in these property stocks. The value extremes are currently larger than I can remember as a result of structural change in the economy. This structural change is nothing new. I found myself digging out my copy of the Financial Times from October 20 1987. There was a sector for Breweries and for Motors while there were so many Industrials they had to be split into A-D etc. What is most surprising is how few of those names still exist as quoted companies today. 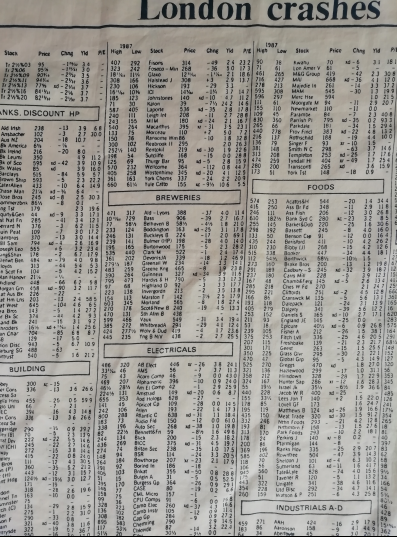 The list of stocks I recognise today from 1987 is below, together with the return according to Sharepad since 1994 for each of them. The outstanding winner was Greggs while only four of them have a compound share price return in excess of 10% since 1994. 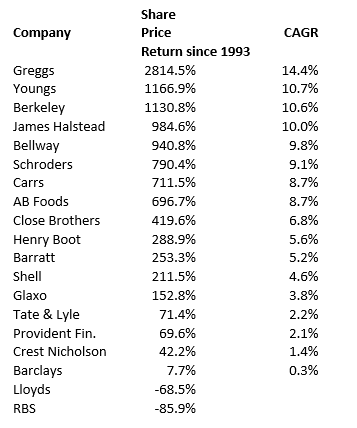 Greggs, Youngs, Berkeley Homes and James Halstead are hardly beneficiaries of structural change. A sausage roll shop, a brewer, the inventor of linoleum and a housebuilder were hardly revolutionary then. I find myself if all this opining over the disparity between growth and value stocks in this market is a waste of time and I should be hunting down the boring stocks. Of course brokers are incentivised towards more volatile stocks so we tend to hear more noise about the unicorns and the deep value stocks on account of them carrying a high probability of an advisory fee being available to a hungry broker. But these boring stocks can do well for investors over time.

The valuations of these strong performers have changed little over time implying the returns have been driven by earnings:

What these companies seem to have in common is making a profit from a product and doing it repeatedly and reliably in a rather boring way.

The best returns in the market often don’t come from investing in value stocks or growth stocks – they come from boring stocks. It can be useful to own a few boring stocks to enable a regular sleep pattern. For these stocks valuation is of little relevance. As investors we are inclined to optimism and pessimism but that is really for traders to make money from. Investors must hunt out the boring stocks.

It’s not easy to screen for boring stocks. I have searched the main market FTSE all share for:

Which reduces the universe of 1,823 to 43 only. I have then reviewed the business model to exclude off balance sheet leveraged companies such as EasyJet and IAG as well as highly cyclical businesses and I compile the following list of 24: 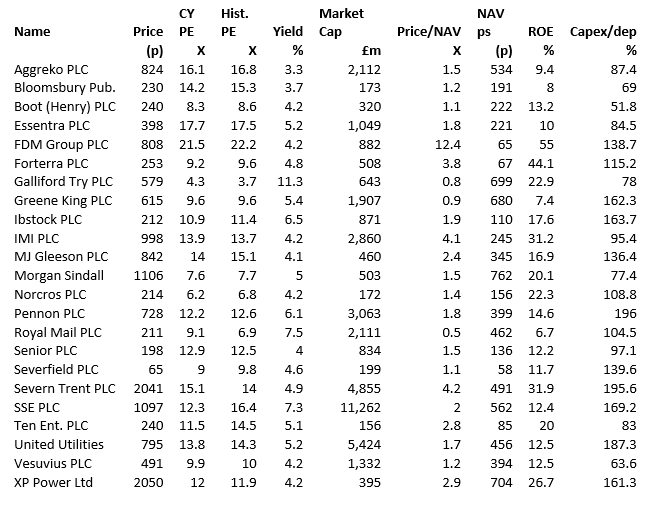 Taking companies that make a strong ROE and have invested more than depreciation on average over the last 3 years leaves a list of 6 companies which all appear to be on reasonable valuations. I would urge you to do your own research on these companies but I do like the look of all them for further research. What is interesting is that 5 out of the 6 companies are construction related.

I have briefly summarised what I found in my quick review of the 6 companies below:

Company Founded 1991. This trainer of graduates, ex- forces and work returners in IT and consulting skills for deployment into largely financial services returned to market in June 2014 having previously taken the company private in 2010. The recent share price fall following some weakness reported among their investment bank client base may represent an opportunity. Though scalability may be a long-term concern.

Results H1 results on 23 July showed revenue up 14% and adjusted PBT up 7% to £27m representing a useful 20% operating margin. The company won 40 new clients in the 6-month period and took on 13% more trainees, known as “Mounties”. The strategy of geographic diversification continues with Asia Pacific and US growing strongly while the UK and Ireland reduced from 54% to 52% of revenue. As it becomes more diversified it looks to be set to become more boring and more scalable.

Company After 400 years technology hasn’t yet found a replacement for bricks. This was previously the building products division of Hanson and includes London Brick, Butterly Brick and Thermalite. New plant will increase capacity by 16%. Very scalable. Making a useful product efficiently investing and expanding. It fits the “Boring Template” well.

Results H1 Results on 30 July showed modest net debt of £34.5m which compares to PBT of £32.7m in H1. Revenue growth reported was 7.8% while the operating margin was healthy 22%. The PBT only increased 1% due to higher costs as planned. Construction work was reported to have commenced on the new £95m investment in the new brick plant. This is a company in a period of investment with a strong ROE which should produce good results.

Company Founded in 1899 as a mining company it bought Redland Brick in 1996. It arrives on the stock market from private equity ownership in 2015. It suffered an earnings estimate downgrade in January on the back of uncertain markets but reasonable growth still expected on a PER of 11.8X

Results the H1 results announced on 31 July showed a 6% revenue increase and a healthy 29% adjusted EBITDA margin to £59m. EPS reduced following the sale of the Glen-Gery business in the prior year. The growth was driven by Clay products where there is inflation in brick prices at the moment. I can’t help feeling a little nervous about the disclosure that corporate overheads increased by £1m as an R&D tax credit had been netted off in the prior year where two years of R&D tax credits were taken in one year.

Company Founded 1903. A “comfortably in line“ trading statement in July has helped the shares of this housebuilder for low income families. This looks reliable and less subject to the vagaries of the property market than some housebuilders. Certainly, looks boring.

Update The pre close trading update on 4 July was bullish. The company sold 25% more homes than the previous year and reiterated its strategy of doubling homes per year to 2,000 by 2020. The strategic land division is in a strong position with 60 sites and 9 sites have planning permission or resolution to grant representing 2,929 plots. With £14m cash the board was confident of being “comfortably in line”

Company Founded in 1956 the stable of brands now includes Triton showers, Johnson Tiles, and Vado taps. Showers and bathrooms may be more cyclical than bricks as it is partly discretionary spending. The potential cyclicality of this may make it less boring.

Company Founded in 1978 this company originally floated on the Unlisted Securities market in 1988. Back in the day these companies were referred to as Steel stockholders but they are ever so much cleverer now and call themselves structural steel specialists. The company has been investing in aits joint venture in India which has huge potential and the company refers to momentum building in the group. An upgrade on results in June brought the share price off its lows which means the shares are now c20% below where they were a year ago. This is beginning to excite me so may not fit the boring mould even though on a 9.3X PE the share price isn’t excited.

Results FY Results to March were announced in June where the revenue was flat at £275m while underlying PBT was up 5% to £24.7m. Underlying operating margin is 8.5%. Net cash was £25m The UK and Europe order book was up 28% to £295m while the Indian JV contributed £1.2m to profit. The outlook statement was confident.

After a bruising week last week for the property stock the valuations are certainly anticipating a pessimistic outcome for property. The evidence is that market pessimism is overdone but it will take time to work out. In the meantime it may be useful to find some good quality boring stocks to pass the time. There are 5 construction companies that may well fit the bill. For me I rather like the look of Severfield and MJ Gleeson who seem to be sticking to their knitting and have scalable potential over multiple years.