I find this one of the most uncomfortable investing era’s I can recall. The outperformance of growth stocks continues while markets grind higher over a sultry summer. I have always had a secret hankering after the ugly duckling that turns into a swan and so have a natural bias to value. Which has been the wrong way to be for an extended period of time now. This SharePad chart of the FTSE350 High Yield index (black line) vs the FTSE 350 Low Yield Index (purple line) illustrates what has been going on. 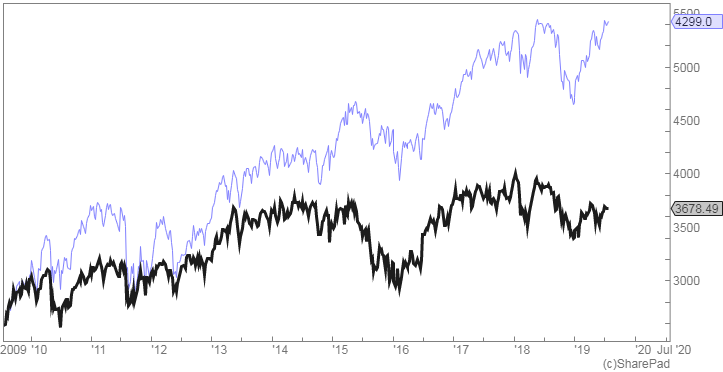 This year the outperformance of growth stocks has been sharp.

This has caused problems for investors perhaps because most investors were brought up in an era when value was fashionable so their early learning was in an environment where value was king. And yet it appears that value is no longer king.

I can thoroughly commend the play “The Lehman Trilogy” which I was fortunate enough to go to last week in London’s west end which chronicles the history of Lehman Brothers from its formation as a drapers shop to a cotton wholesaler to a coffee trader to an investment bank before its downfall. At one point I could empathise with the plight of successive generations of Lehmans who suffered the bigger ideas that the next generation of Lehmans brought to the table. Philip Lehman was dumbfounded when the younger generation wanted to cut the American continent in half to build the Panama Canal while he couldn’t understand what was wrong with good profitable railroads and industrial companies. I could certainly relate to the feeling as I see good profitable and cash generative businesses eschewed by markets today in favour of online communities that are loss making companies worth billions.

This looks like a dichotomy many previous generations have encountered. I no longer feel alone in my difficult place of having a value bias while highly valued growth companies keep racing upwards.

Perhaps if we look to history, we may notice a trend that these innovations tend to succeed in the end. I am sure that Blockchain will ultimately prevail perhaps as a global business accounting system, but most innovations are preceded by a bubble of hope just as the 2000 technology bubble was right in the medium term but once the future becomes clear the excitement of the new era can cause bubbles that can destroy investors portfolios.

Daniel Kahneman’s prospect theory, developed in 1979 showed empirically that humans, when faced with decisions involving risk tend to overweight projects which have a remote probability of succeeding while underweighting projects that have a high probability of success. Which is why bubbles tend to occur in the early stages of a market. 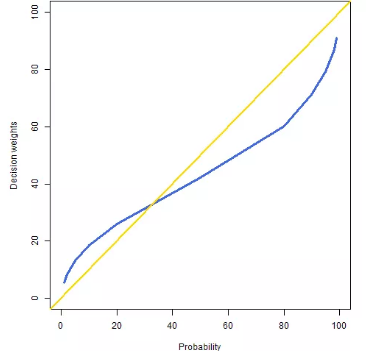 So, in order to outperform, I sense my portfolio must be positioned around the probability of 80% of success. Not in the early stages where valuations are likely to be high relative to the success probability. So that’s Bitcoin investment ruled out. And Blue Prism.

I can see two ways of playing this.

The first ones carry the difficulty that they are frequently highly valued. The excitement of the technology sector is connected to its scalability and high ROE licensing models but they tend to be at the low probability of success end of Kahneman’s spectrum and consequently likely to be overvalued. The second cohort can often turn out to be value traps until the earnings growth starts to show which can take quite some time. So, I have resolved to go for the latter and force myself to be patient while todays low interest rates are forcing valuations of those early stage hope companies ever higher.

A filter on SharePad for companies where Capex has exceeded depreciation over the last 3 years tells me there are 142 companies to choose from. The sector split is broad but three sectors stand out in Travel & Entertainment, Support Services and Retail.

Next I need to know the investment these companies are making is likely to be worthwhile so I need to filter by CROCI using SharePad. CROCI stands for Cash return on Capital invested. If I screen for companies that make a CROCI above 20% this reduced the universe from 142 to 29. Perhaps this large reduction is indicative of how many companies are investing at low returns to engineer the illusion of growth to get their market rating up as opposed to allocating capital efficiently at good returns. The list is below. I have used CROCI including goodwill and excluding goodwill to indicate which companies have been acquisition driven.

This list contains many well loved and well researched stocks such as Domino’s Pizza, Greggs, and Games Workshop alongside Unilever and GSK – suggesting this screen does find some of the “high quality” companies. Some companies, such as Hargreaves Lansdown may be investing for defensive reasons as their model matures and competition increases, but the purpose here is to find the company that is quality and has been investing but isn’t yet highly rated.

(You can run this screen for yourself by selecting the “Jeremy Grime 29/07/19: Stable & investing” filter within SharePad’s Filter Library. Simply go to: Filter -> Apply filter -> Library) 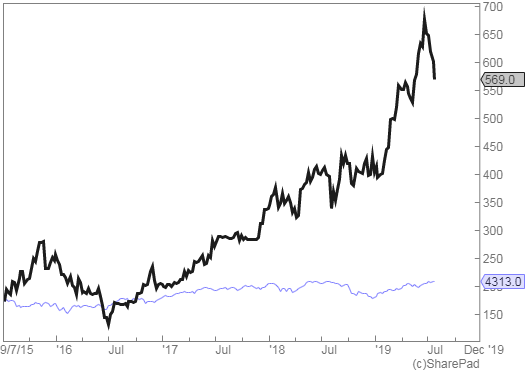 This looks very interesting with high investment, and high CROCI which isn’t acquisition driven but it is highly rated. Kainos provides workflow software to governments and healthcare companies and came to market in 2015 at 139p/share. Today the share price is 570p. The indications are the earnings will grow at 12% this year which may be conservative given the investment but on 33X for current year 12% growth I just can’t get there. This may well be an example of one of these companies that will continue to be re rated in this world of growth appetite but I just can’t get there personally. 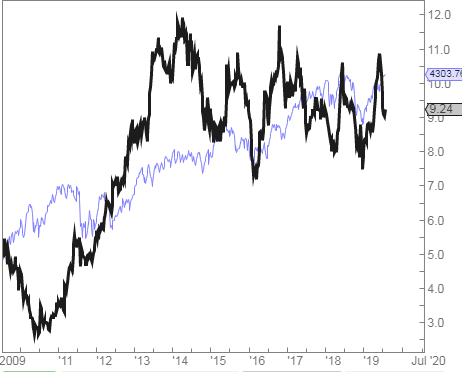 Since 2014 the shares have underperformed the FTSE 350 low yield index (which I am using as a proxy for growth companies). We know the company is in a phase of investment so the question is whether this is (another) value trap or whether as the benefits of investment start to come through the shares will be re rated and the earnings growth accelerate.

Operating in the convenience store sector the excitement over online parcel deliveries can be seen in the share price movement following the credit crunch which perhaps represents Kahneman early stage decision making where investor overweight the risk decision and potentially, we could be at a point where investors underweight the probability of success.

The EPOS roll out continues and is currently installed in 12,881 stores. The company charges a weekly service fee of between £10 and £30 for this system. This year to March 2020 the company targets 15,800 installed terminals.

There are 250 bill payment companies in the network with 21 signed up in the past year to March 2019. Multi pay transaction growth was 40% and eMoney transactions grew 11.4%.

Given this strong outlook it is surprising to see revenue down in the year to March 2019 to £211m and PBT up 3.3% to £54.7m on the back of strong cost control. The reason was having to renegotiate a parcel contract with Yodel and the cessation of a Department of Work and Pensions closure. The CEO statement refers to the cash generative nature of the business and notes that delivery of expectations for 2020 will require growth across EPOS, Mulipay, Parcels and Romania. Which doesn’t fill me with joy. It then goes on to state the board is confident there will be a progression in profits. Hmmmmm….

The amount of positive rhetoric is surprising and bears little relationship to the numbers being reported on at recent results. It appears to me that while there is a huge opportunity in this space the large parcel companies have sufficient leverage to keep the pricing coming down and PayPoints relatively strong market position doesn’t provide any pricing power. This looks firmly like a sucker stock rather than an emerging growth stock. Which highlights the dangers of following screens too closely? 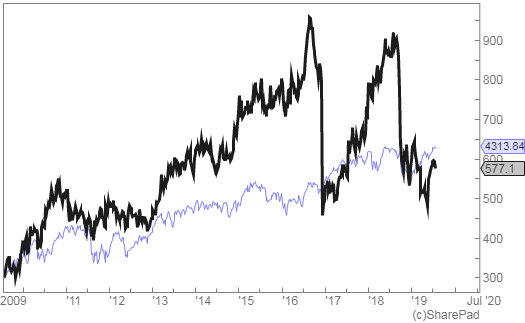 Financial exchanges are one of my favourite sectors as they make very high ROE’s, are cash generative, and have repeat revenues when scale is achieved. So, the screen has picked up IG Group with a high CROCI and higher levels of investment.

The share price chart tells the story of a good growth business having regulatory intervention which has changed their market. In 2016 the FCA announced its intention to reduce the leverage available on certain CFD products to between 30X and 5X where previously they had been offering sometimes 200X leverage triggering stop losses at customers expense due to extreme volatility. Other rules around binary options and marketing were also introduced. As the rules were finalised and clarity increased hopes surfaced that the impact may not be as bad as feared but in 2018 when the rules were enacted it became apparent that it was having a significant impact on revenues.

Interestingly all 3 companies in this space, IG Group, CMC Markets and Plus 500 have elected to increase their costs in order to gain market share in the regulatory shake out. In market downturns it’s always a good time to build a business and in market upturns it good to run a business. Plus 500 announced they would maintain their marketing spend despite reduced revenues. CMC said it will adapt its business model to capture customers which sounds a little less committal, while IG Group put out a strategy update in May that made me wonder how many Shredded Wheat they had had for breakfast that day:

Having delivered £477m for FY 2019 the guidance suggests revenues of £620m by 2022. However, on SharePad forecasts we can see this hasn’t been factored in by analysts:

All three companies in the CFD/spread betting space are modestly valued. Plus 500 has less revenue from professional customers and has a more volatile history as well as the track record of Israeli customers being questionable, though arguably this may well be reflected in the valuation:

For those interested in further detail, my colleague Maynard Paton posted a review of Plus 500 earlier this year.

IG Group now has 66% professional clients and an aggressive growth strategy which makes me suspect this company can retain its previous growth rating when it has been values at 18X in the past. Forecasts are below management expectations suggesting the potential for upgrades. Plus 500 has more risk and more upside so depending on investors risk appetite they both look interesting. I suspect all three companies will do well now the regulatory changes have all been completed. With business models that are cash generative, high ROE and scalable this screen has unearthed one company that has the potential to be tomorrows highly rated growth stock. IG certainly looks like it is a growth stock where investors are discounting the probability of growth as Kahneman showed is part of human nature.

As Growth stocks continue to be rerated upwards by the power of low interest rates the value investor is at risk of becoming depressed and potentially extinct as there are many value traps. Many of us have spent a lifetime of value investing and adapting our investment style can be a mistake. So this is a challenging environment for many, myself included. If we stick to Kahnemans prospect theory and hunt out those stocks that have a high probability of succeeding and are underrated we can still satisfy our need for value alongside investing in growth stocks. IG Group looks like one of these to me.