The Greening of Fund Management

It is still useful to contemplate the state of the world over a good lunch as I did last week enjoying a long and slow sunny afternoon with a fund manager friend. We reflected that undoubtedly the investors buying into Beyond Meat, the $10.7bn plant burger company would be the type of people that also bought full priced sofa’s from DFS. My fund manager friend also reflected that given the shape of the deals he is being shown at the moment by brokers he is beginning to think the next bubble could be in sustainability. His inclination was to decline the deals but his suspicion is these valuations could go a lot higher.

With cheap capital swilling round the system it is now moving out from the Unicorns to other sectors. Gold reached a 6-year high last week while nickel prices are up 28% in the last month and the S&P index breached 3000. The government wanted to reflate the economy by keeping interest rates low, when in fact it is reflating asset prices. 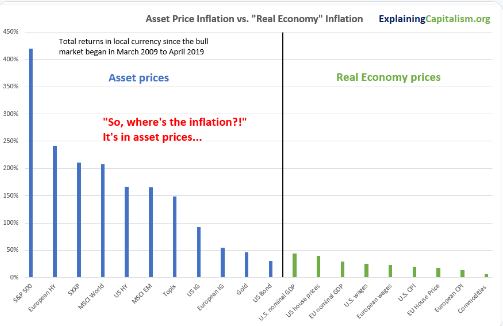 Trends in the US often precede the UK and the IPO market in the US has been buoyant with 62 IPO’s in Q2 raising $25bn according to Renaissance Capital. The average return has been a mouth-watering 30%. While the technology driven stocks have performed well the standout performer, Beyond Meat, is a sustainable plant burger business adding some credence to the fund managers suggestion the next bubble will arrive in the green space. Some of the top performers have been:

Is sustainability a passing fad?

There is always the possibility that this could be just another fad and we will enjoy an exciting ride in a sustainable stock but then be left holding the baby when the tide goes out again. A check of a few long- term drivers suggests that the trend towards sustainability is here to stay. The 2016 US Trust and Worth survey shows that the younger generations who are now accumulating wealth place a higher emphasis on Environmental, Social and Governance (“ESG”) considerations which suggests it may be a long-term trend rather than a short-term fad. 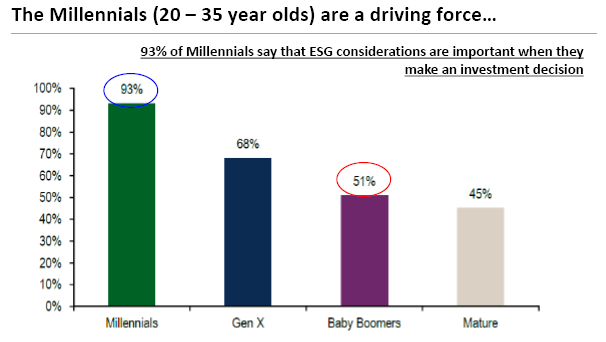 Source: 2016 US Trust and Worth Survey

The problem I have is deciding what constitutes a sustainable investment. One fund manager that prides itself on its ESG credentials is Hermes and yet a check of their Global Equity ESG fund shows Delta Air Lines in their top 10 holdings which doesn’t strike me as very sustainable. Certainly, when compared to a plant burger.

Charles Montanaro is a fund manager I have always held in high regard for his long-term quality investing style which has delivered good long term returns for investors and I see that last year Montanaro launched a “Better World” fund. A run through some of the larger holding in that fund shows the following UK investments:

The “Better World” fund is at the “Impact” investing end of the spectrum which does some good while funds that badge themselves “ethical” can be focussed on the negative screen of not investing against the fund beliefs. There seem to be several subjective judgements to be made across the range of ethical, responsible, sustainable and impact investing.

The amount of research required for us as individual investors to appraise the environmental credentials of a company can be extremely difficult as most companies will say they have a high sustainability focus but there hasn’t yet been developed a consistent and credible measure of this. Predicting which company is likely to be the next recipient of the significant investment demand for sustainable investment is not easy.

However, there are fund managers which specialise in ESG investment and investing in these may be a good proxy so investors can benefit from the valuation uplift that may result from this coming wave.

Apart from fund managers being generally experts in allocating capital efficiently they are particularly good at doing that for themselves. The FCA asset manager review complained of sustained high profits over a number of years, weak competition, and consistently high operating margins, averaging 34% in their sample. And yet their package on measures announced in 2017 hasn’t seemed to affect their returns. In my view they remain excellent investments and generally (as I mentioned in last week’s ramblings) they provide better returns than their funds.

The reason for this is that there are high barriers to entry. The level of trust needed for investors who are less experienced investors who face the prospect of entrusting their life savings to some-one else is high. Their prosperity in retirement can be easily thrown to the ducks and those that have that level of trust tend to get rewarded handsomely for it. These businesses are rare and have a lot of intellectual property, or a “deep moat” as Warren Buffet would call it.

This high level of required trust means that investment in fund managers carries with it 3 accentuated factors:

Example: Fund Smith has high levels of market trust at the moment following a period of strong performance. The latest filed accounts to March 2018 at companies’ house show a profit for the management company of £20.96m from revenue of £122.77m which is an operating margin of a lowly 17%. Lower than the average of 34% in the FCA review. This is still a high ROE of 178% on the capital the members put in but a strangely low operating margin. Note 15 in the accounts shows a related party transaction with Fundsmith Investment Services Ltd. Which charged £88.4m management fee during the year. This company is apparently under common control which leaves one to conclude it is possible this could be a Terry Smith management charge. This is a high return business.

Flows into a fund management company are a good indicator of business momentum. Fortunately, most of the quoted fund managers disclose them quarterly so I find the chart below a useful way to determine the existence of momentum in a fund management business:

Two of the three best flows are driven by inflows into their sustainable processes.

Liontrust is the winner in the quarterly flows stakes to June 2019 but has been remarkably consistent since March 2018 which is 12 months after it acquired Alliance Trust’s socially responsible investment business. Their net inflows in the 3 months to June were 5.7% while Ashmore and emerging market debt fund manager reported 3.9% and Impax, the environmental fund manager was 1.9%. Meanwhile Miton and Premier experienced modest net outflows in the quarter to June. Jupiter is yet to report.

It would seem logical to expect share prices to be highly correlated with flows. The share price performance of the fund managers over the same period as the above flows looks like this:

Performance For investors to determine future share price performance it may therefore be necessary to take a view on future fund flows. There are often company specific factors that affect this but the one year rolling performance figures often have a strong influence on future fund flows. A strong performance will often precede inflows and vice versa. This information is frequently not made public if the funds are institutionally held but monthly factsheets are provided for OEIC funds which are generally retail focussed. So, for the fund managers that are retail focussed I have calculated the 1 year rolling performance of their OEIC assets:

Her we can see that Miton and Premier have suffered poor performance over the last 12 months and have suffered outflows while Polar, Liontrust and Impax continue to perform.

With the power of momentum being strong for fund managers it would therefor seem likely that Liontrust, Polar and Impax may continue to perform. Interestingly, while Jupiter and Premier do run ethical funds they are a very small part of the AUM relative to the sustainable/environmental funds for Liontust (30%) and Impax (100%).

But there can always be a bump in the road that we don’t see which can reverse performance and/or flows. Company specific factors may come into play:

Given the fund performance and flows are highly correlated with share prices it may be reasonable to expect those at the top of those tables to be the highly valued shares such as Liontust, Impax, Ashmore and Polar, while we may expect Miton, Premier, and Jupiter to be lowly valued. Valuations look like this, in market cap order:

It would appear that my fund manager friend may be on the right path when he suggests that anything environmental is becoming highly valued at the moment with Impax topping the table. Liontrust, Polar and Jupiter seem to be bunching in the middle of the table which is the momentum zone. Of these my personal pick would be Liontrust. Polar is perhaps a little volatile for my sensitivities while Jupiter could go either way just now. The value investor needs to take a good look at Miton. The price is reflecting Gervais Williams recent fund performance which could change. Or perhaps the income investor may care for Premier with its 5.7% yield.

Jupiter’s forthcoming results will be interesting at the end of this months with a new CEO and headcount changes. We don’t yet know the flows to June.