Time to own value?

The Unicorns stable door has been left wide open. Beyond Meat, a US loss making protein meat brand, listed in New York in early May rising 163% on its first day of trading valuing it at 27X last year’s revenues.

This followed the loss-making Pinterest rising 28% on its first day of trading and Zoom rising 72%. These are all companies that are benefitting from structural rather than cyclical growth. And along came Uber.

Last September a host of wall street banks pitched to Uber’s executives that they could get the IPO away at $120bn valuation so Uber duly appointed no less than 30 investment banks who in the event got the IPO completed at $45 which is a $75bn valuation, some 38% below where the banks thought they could price it. Today Ubers shares languish at $41. Lyft in the US has also now drifted back from its IPO price of $72 to $52 today.

Maybe we have seen this before. Back in the technology bubble of 2000 the last IPO in the UK to get away was lastminute.com which floated at 380p and within two weeks had sunk to 270p per share. Nobody rang a bell. The market mood just changed. One has to wonder if the Uber IPO of May 2019 is the canary in the coal mine.

The high valuations of these Unicorns have been driven by cheap money seeking structural growth opportunities in the absence of cyclical growth. The UK bank base rate is currently 0.75% and a 10-year government bond currently yield 1.04% while the yield on the FTSE 100 is 4.7%. While money earns little in bonds it appears there has been a squash of money in the doorway marked “structural growth” driving valuations to extreme levels.

This bi-polar world presents difficulties for fund managers. Most investors who earn the title “experienced” were trained in a world where equities grew their dividends over time and consequently were valued on a lower yield than bonds. Which was the case from 1956 to 2010. But in 2010 the government introduced quantitative easing (QE) which reduced bond yields and since then bonds have yielded less than equities.

The implication of this is that equities still grow but are riskier than bonds, so more yield is required to compensate investors for the risk of holding the equity. In other words, we have moved from an environment where the markets emphasis is on risk rather than growth. Of course, where there is genuine growth the valuations are very high but low growth companies are deemed to be risky alongside smaller, riskier companies.

Today equities yield more than gilts to a degree not seen since Queen Victoria was on the throne. 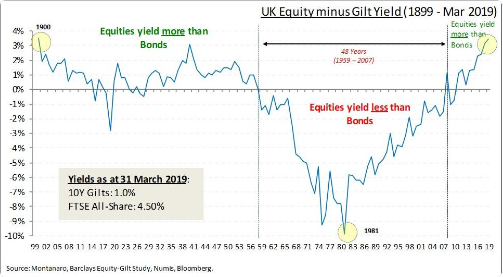 This risk aversion is evident in the 12-month performance of the FTSE indices where small and risky stocks have significantly underperformed large companies. Sharepad stats show:

It seems we are in a market which has been discounting the risk of equities more than it values the growth they offer. Combining this risk aversion with a low growth world and low returns on cash driving capital to search for increasingly low returns and we create high unicorn valuations.

This poor performance of risk assets is contrary to 218 years of historical data which shows that equities produce better returns than bonds over the long term which would suggest they should be more highly valued. If current valuations of bonds and equities is correct the implication is that equities will not grow. Of course, everyone’s definition of long term differs, but I would like to think that the graph below since 1801 is sufficiently long term to illustrate the point. 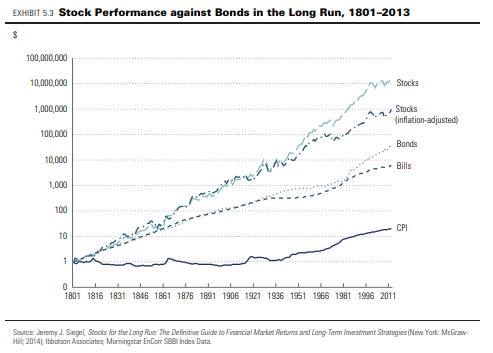 This is also at a time when UK Pension funds (which I imagine would fall into the bracket of long-term investors) own a mere 3% of the UK stock market. In 1998 the ONS stats tell us this was 21.7%. So as Warren Buffett tells us “it is wise to be greedy when others are fearful”. There may well be rewards for those investors prepared to take on some risky assets when it is unfashionable contrary to history.

It is telling that in the last 10 days the technology heavy NASDAQ 100 has underperformed the FTSE 100 by 4.6%. It could just be that Uber has rung the bell and its time to go against the historic momentum traders.

I am eager to have plenty of these neglected small companies where the risk discount is high at the moment. The chart below shows FTSE 350 sector performance over the past 12 months.

There are structural issues with some underperforming sectors but my eye lingers on the Real Estate Investment Trust sector which is down 10.9% over 12 months while I have noticed both British Land and Intu have recently sold properties close to net asset value while the shares trade at significant discounts. I have generally found it very satisfactory to buy assets at prices below their market value.

Buying assets at a discount is of course what property companies themselves like to do. And so last Thursday the bid for AJ Mucklow could signify a new era. London Metric bid for the old family Midlands based property company AJ Mucklow where the family still holds 17% of the share capital. The £415m bid was at a 14% premium to the December 2018 net asset value of £363m. It is possible this could herald a return of value investing.

A sample of 9 property companies shows that on average their share price has declined by 21% over the last 12 months and over 5 years the average share price return has been a lowly -11%, while on average they trade at less than 70% of their asset value. There are some good yields on offer as well with 5.8% from British Land and 4.9% from Intu Properties.

It is unsurprising that the only one that stands at a premium to its asset value, Londonmetric has just acquired Mucklow for a modest premium to asset value. This looks like a very bi polar world where Intu, which is shopping centre assets, is trading at a third of its asset value, while Londonmetric, which owns largely warehouse distribution assets, is trading at a 20% premium to its asset value. When such extremes exist, markets tend to find a solution which frequently involves M&A activity as we are starting to see. That is often the early sign of a change. So, with Intu’s extreme discount to asset value and perhaps for the more risk averse investor, British Land’s comforting yield, both of whom have sold assets recently these two are worth a closer look. 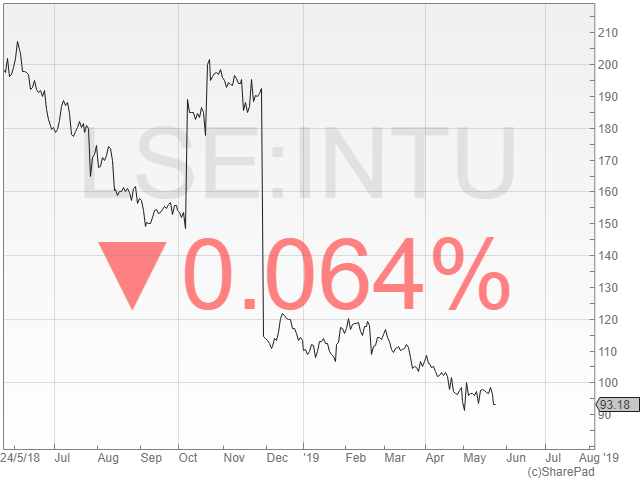 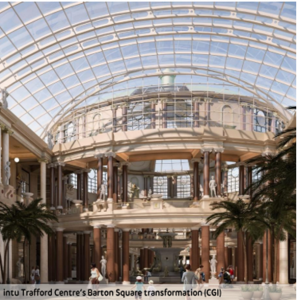 Total assets are £9.2bn financed by £4.9bn of debt with a weighted average cost of 4.2% and duration of 5.8 years on average. The share price graph doesn’t look encouraging but note the price has levelled out of late and the sharp movements represent previous bid approaches. 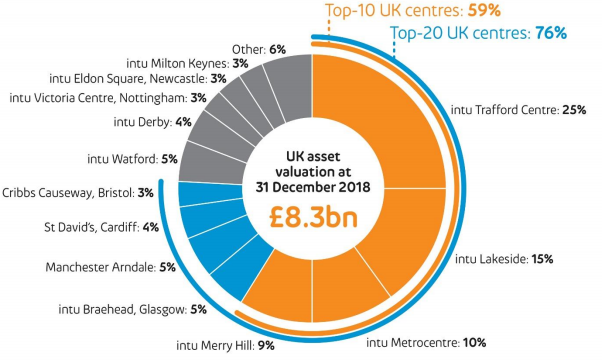 On 18 April the beleaguered Intu sold its Derby shopping centre to a JV backed by the Kuwait Investment Office for book value of £745m (for the entire shopping centre) indicating that it may be conceivable that NAV could even be realistic.

The trading statement on 3 May states their aim is to reduce the loan to value to below 50% and the sale of the Derby shopping centre was the start of this process. The company continued to downgrade guidance for net rental income a further 6-8% during 2018 due to challenging conditions expected to continue causing a 6% decline in the share price.

The implications of reducing the Loan to Value to 50% broadly implies the sale of £2bn of shopping centres, illustrated below: 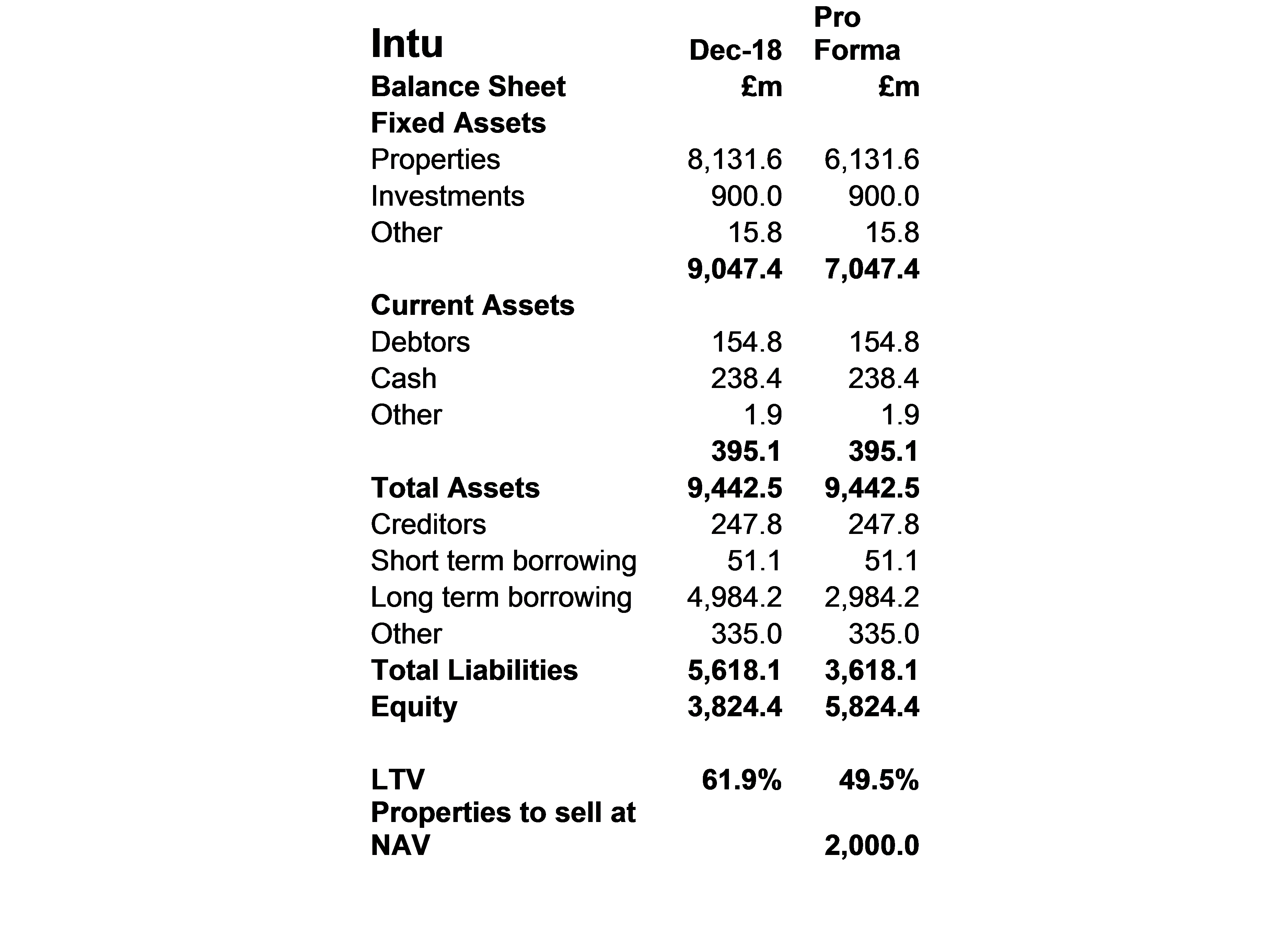 The December 2018 NAV was £3.82bn and the market cap with the shares at 93p is £1.27bn. That is a 67% discount to the net asset value indicating the market doesn’t believe the valuation of the properties. It was only in October last year the company received a bid at £2.8bn which fell away to cries of “Macro uncertainty”. This followed a failed bid from Hammerson in April last year at £3.4bn.

It seems likely that the industry players believe the asset value to be significantly above the current level. We Work is coming to market at a valuation said to be in the region of $20bn which is 8X last years revenue. Intu trades at 2.2X last year’s revenues. Let’s hope that Intu can sell some shopping centres to We Company. This looks like an arbitrage where the valuation gap is too wide between the unicorn and the old-world stock. 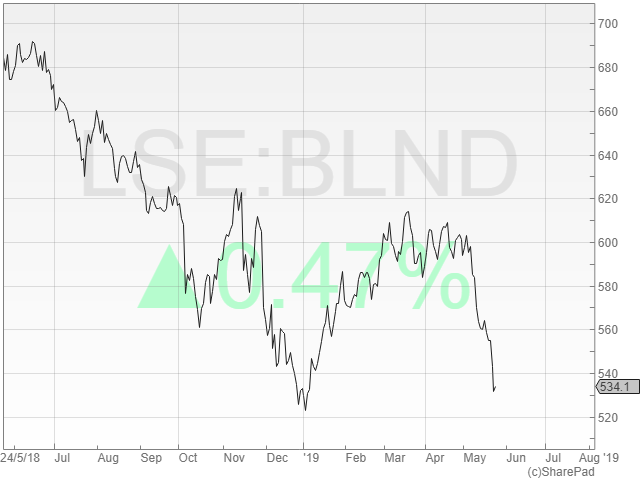 For the more risk averse investor British Land may be a more comfortable situation in the cyclical world of property investment where the leverage is less at 26.7% and the portfolio is more office exposed. It is largely a play on London offices with centres such as Broadgate and office developments 100 Liverpool Street and 1 Finsbury Avenue alongside some retail assets. 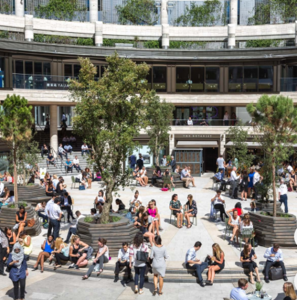 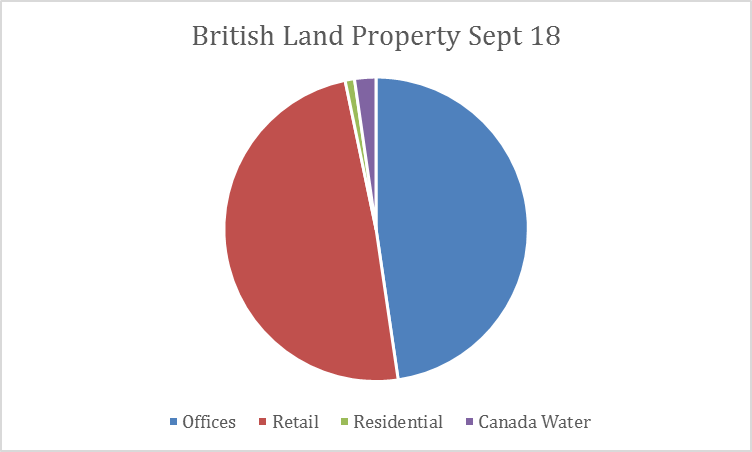 On 23 April British Land sold 12 Sainsbury’s superstores at a modest premium to book value netting £429m into its joint venture with Sainsbury’s to Realty Income Corporation a US Real estate investment trust again suggesting book values may be realistic.

NAV is £9.5bn whereas the shares trade at a whopping 47% discount to the NAV again suggesting asset values are not realistic. Between June 2018 and March 2019, the company has bought back £200m of its own shares which is always encouraging. Meanwhile the shares yield 5.8%.

The discount to asset value suggests the asset valuation is not realistic, contrary to recent events where properties are sold around the valuation. For a patient investor they will receive a 5.6% dividend yield while they wait for the value to come out.

The combination of what is termed “QE” in the UK and the resulting low interest rates globally is driving a hunt for growth that is resulting in over valuation of structural growth assets. The flipside is cyclical assets are under-valued. While there are headwinds we are not in a recession. Last reported GDP growth is 1.8% in the UK. The flotation of Uber may herald a new era when value investing can earn good returns. Recent underperformance of high growth stocks combines with M&A activity which may herald the dawn of a new era in what has become a bi polar stock market. Investors may do well to be greedy when others are fearful.

Upcoming Events in the Sector