Screening For My Next Long-Term Winner: Mattioli Woods 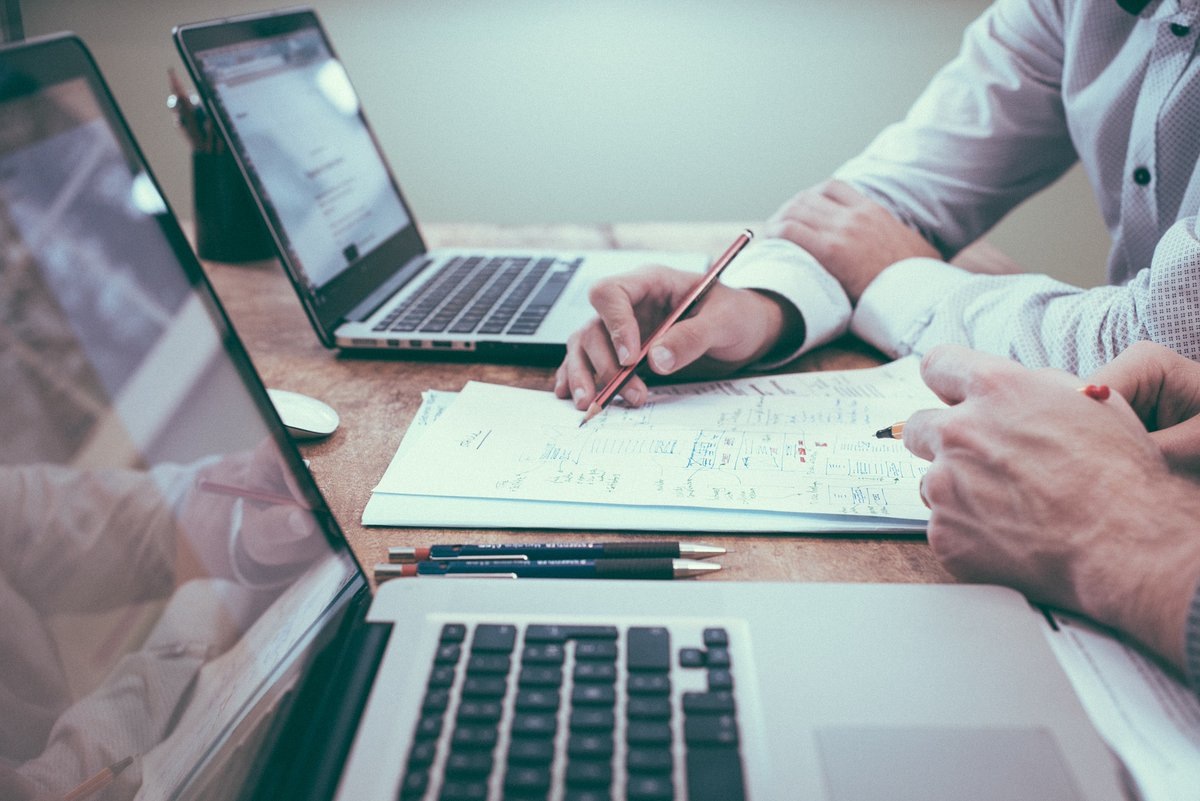 Many years ago, one of my favourite sources for investment ideas was the Financial Times.

However, the FT’s articles did not interest me, and nor did the Lex column.

Instead, I studied a small table that was tucked away on those pages that listed every share price.

You see, this table named the shares that traded at a 52-week low — and I wanted to learn more about the companies that the market disliked.

Indeed, I hoped a decent business would occasionally fall out of favour, join that table and become worthy of investigation.

These days, SharePad can do all of this 52-week-low screening — and much more besides — in an instant.

(In fact, I have not read the FT for so long, I have no idea whether the paper still publishes that 52-week table — or even those pages full of share prices!)

Let me now explain how I employ SharePad to scan for shares hitting fresh lows. I will then provide a case study outlining what I then check.

Any number of days, weeks, months or years

You can scan SharePad for investment ideas using just about any criteria.

And if you — like me — are looking for shares hitting new lows, you are not restricted to 52 weeks either. In fact, you can set just about any timeframe you wish.

SharePad’s full guide to creating share filters can be found here. I will skip the finer details, and just show how to set your preferences for finding prices hitting fresh lows.

When adding your first criteria, after selecting the Price tab at the top, choose the ‘Latest price’ option within the left-hand menu: 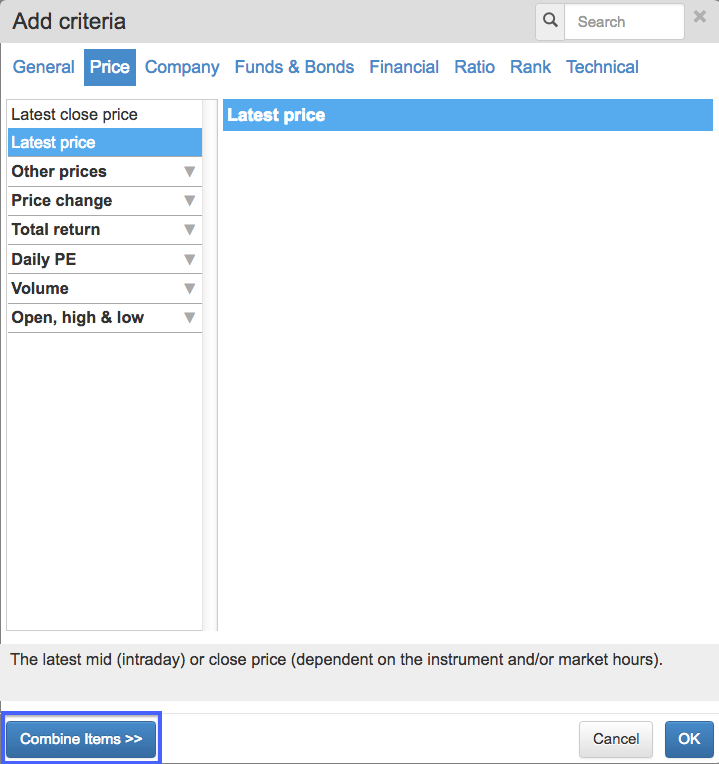 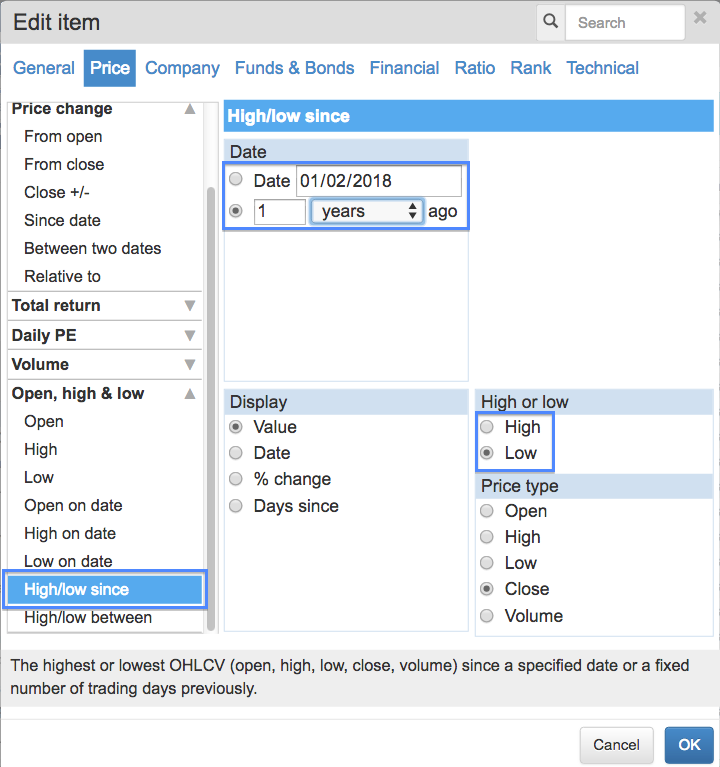 After selecting the Price tab at the top, this time choose the ‘High/low since’ option within the ‘Open, high & low’ section of left-hand menu.

Then in the top box, you can set either a specific ‘since’ date or any number of days, weeks, months or years (I have chosen one year).

Then still on the same screen, in the right box (as highlighted by my 2nd blue square above), you can set your search to either the Low or High share price (I have chosen Low).

After that, click on ‘OK’ and then, to compare the latest price with your chosen Low or High option, set the drop-down box to ‘% change from’:

That way you can define a percentage range from your chosen Low or High — so giving you greater screening flexibility.

Let’s put all that into action and find a case study.

For this particular screen, I set the percentage from the one-year low to 10%.

However, current market conditions left me overwhelmed with candidates.

In fact, of the 2,179 shares listed on the London market, SharePad returned no less than 1,190 names within 10% of their one-year low!

I therefore had to apply some extra filters.

Those criteria whittled down the 1,190 to 19, which I then sorted on the percentage proximity to their respective one-year lows:

I ignored London Security because 99% of that business is owned by the directors. Only a tiny £2m ‘free float’ was therefore left for the rest of us.

Next on the list was Mattioli Woods (MTW), which I noted had a decent £24m net cash position when set against a £177m market cap. I was also vaguely aware of this business having performed quite well over time. 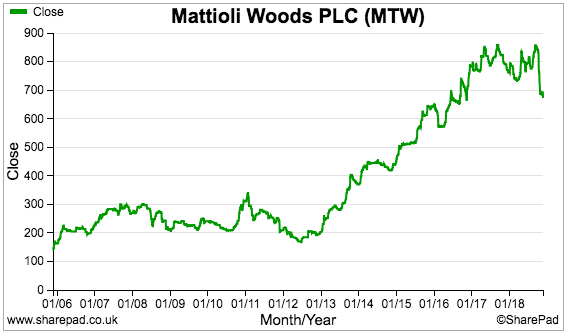 The price is actually at its lowest level since late 2016.

Anyway, I had found enough to investigate further.

Mattioli Woods was established during 1991 when Ian Mattioli and Bob Woods formed a partnership to provide pension consultancy services.

The business has since expanded significantly and today employs more than 100 consultants that offer specialist pension and wealth-management advice. Clients are typically company directors, high-income professionals and affluent pensioners.

At the last count, client assets under management, administration and advice stood at £8.7 billion. Some 85% of revenue apparently comes from recurring customer fees.

According to the company…

…have all combined to deliver an impressive growth record.

Mattioli floated during 2005 and the following SharePad charts showcase the firm’s long run of revenue, operating profit and dividend advances: 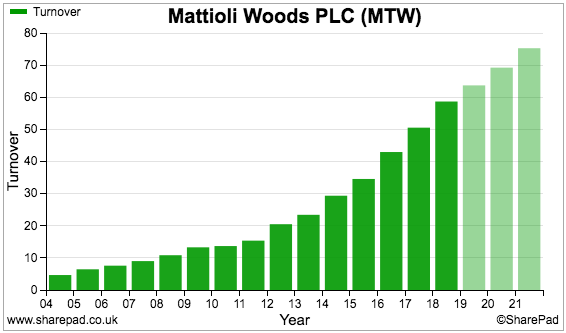 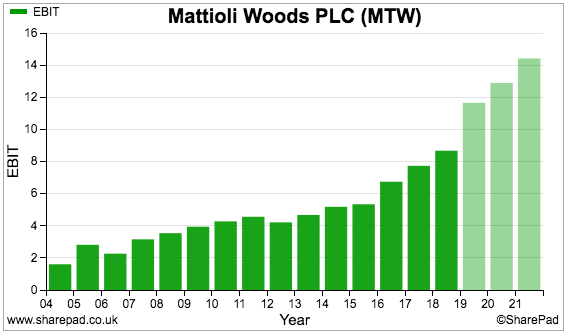 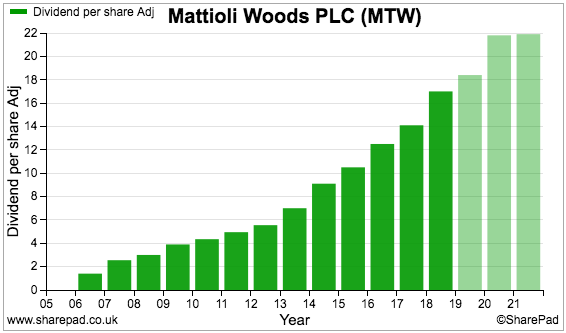 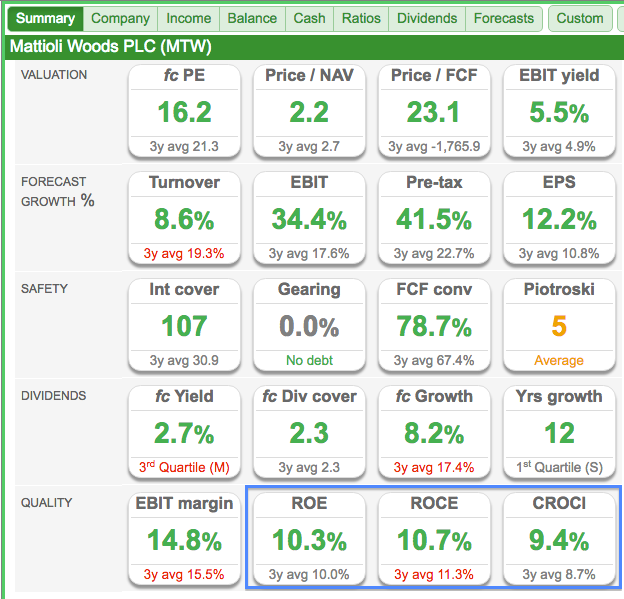 However, the returns on equity, on capital employed and on capital invested within the bottom row do not appear that spectacular. 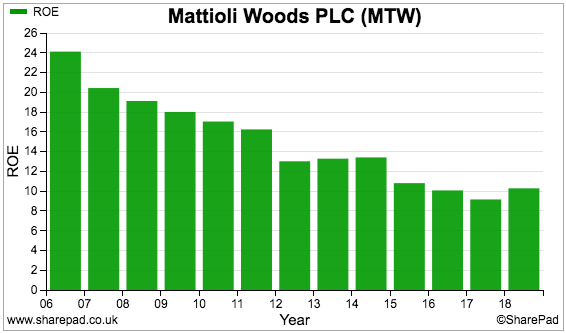 The trend after flotation is not great.

I wonder what other ratios have deteriorated since becoming a public company?

Finding this next chart did not take long: 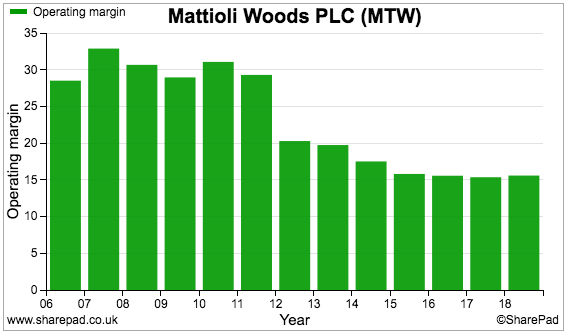 Mattioli’s operating margin took a hit during 2012 and has stabilised at a still-respectable 15%. I had to sift through Mattioli’s old annual reports to discover what had happened.

My sums suggest that, pre-RDR, Mattioli could earn revenue equivalent to 0.76% of a client’s portfolio.

Post-RDR, that percentage dropped to approximately 0.70%.

True, a 0.06% difference does not sound much. However, with client money at £8.7 billion, such lost fees equate to £5m — a notable sum when turnover last year was £59m.

Plus, the group’s largest expense by far is employee wages — which always seem to rise within the financial sector, irrespective of whether clients enjoy positive returns or not!

I therefore understand why the RDR reduced Mattioli’s margin by so much.

Anyway, on the subject of employees, here is Mattioli’s sales per employee chart: 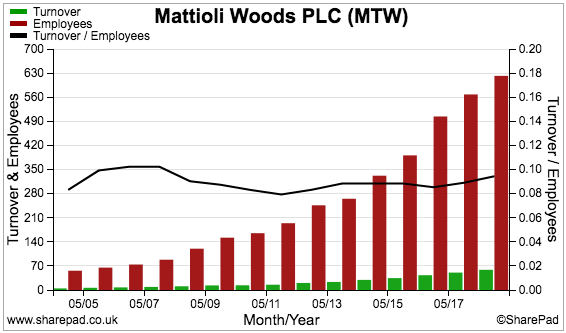 (Note: I constructed my sales per employee chart using SharePad’s Financial charts feature. This tutorial explains how you can create such charts, too!)

You can see sales per employee (the black line) have been stuck between £80,000 and £100,000. Not exactly Fever-Tree from the Warpaint article the other week.

Ongoing acquisitions and a £19.6m placing

Once again SharePad’s ace download facility comes to my assistance. I simply selected ‘Export data’ from the Sharing tab… 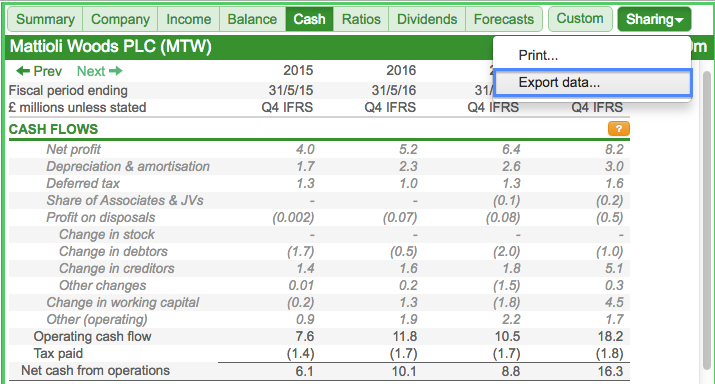 …and quickly made a few spreadsheet calculations to judge how Mattioli has converted its reported profit into cash. 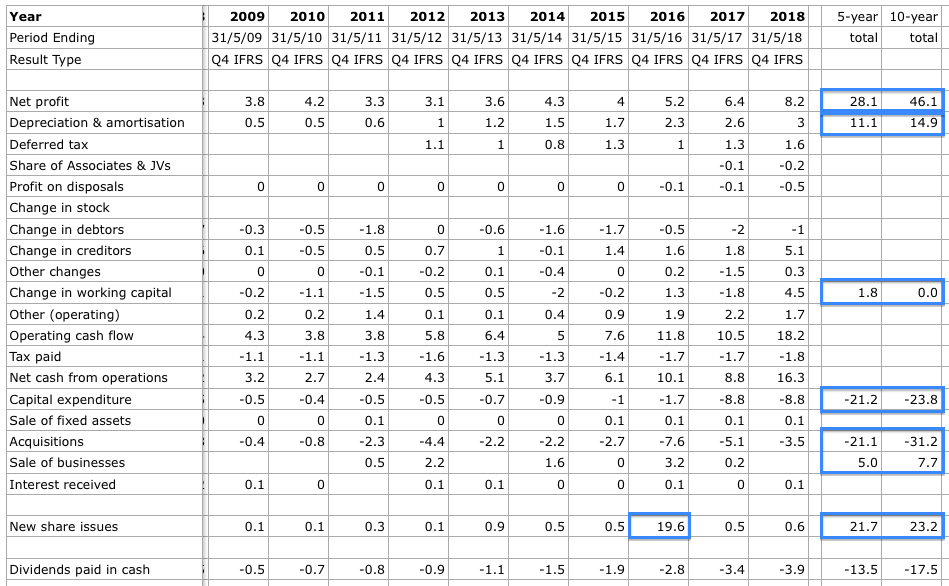 The ‘change in working capital’ line looks good to me. For example, during the last five years, Mattioli’s changes to debtors and creditors have on aggregate generated a positive £1.8m cash movement.

Elsewhere, I see total capital expenditure is much higher than the associated depreciation and amortisation charged to reported earnings.

However, a quick check within the annual report shows the differences relate to 2017 and 2018 expenditure on a new head office. Such costs should subside in due course.

For instance, some £21m has been spent acquiring other firms during the last five years. Subtract the ‘sale of businesses’ of £5m and you get £16m — more than half of Mattioli’s £28m five-year net profit.

Another striking number is contained within the ‘new share issues’ line. Some £19.6m was raised through a placing during 2016 to help fund further acquisitions.

My immediate thought is that the lower ROE trend has something to do with all the acquisitions and the cash raise.

Let’s hunt for more clues with some further SharePad charts.

Acquired intangibles and extra cash lead to a modest ROE 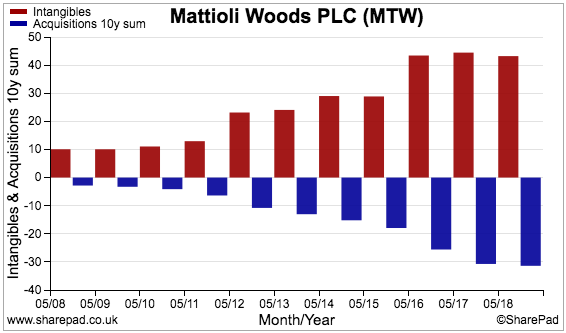 (Note: acquisition expenditure (in blue) is shown as a cumulative value over the ten years) 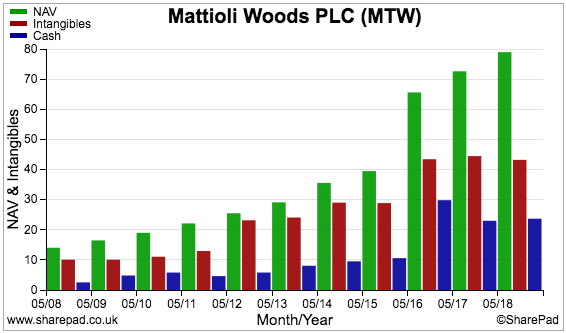 I calculate Mattioli’s NAV has advanced by 220p per share while earnings have climbed by 22p per share during the last ten years.

The incremental return on Mattioli’s NAV (or equity base) is therefore 22p/220p or 10% — which is reflected by that earlier ROE chart.

As such, Mattioli’s modest ROE figures are indeed a result of greater intangibles and a cash pile that has yet to be spent on further acquisitions.

At least £10.9m of the cash hoard must therefore remain in the bank and not be spent on acquisitions.

The boss is on £1.7m a year including bonuses and LTIPs

Mr Mattioli has served as chief executive since the flotation and owns a useful £22m/13% shareholding that pays a £561k annual dividend.

I would like to think Mr Mattioli’s long tenure and significant investment are good omens for shareholders. 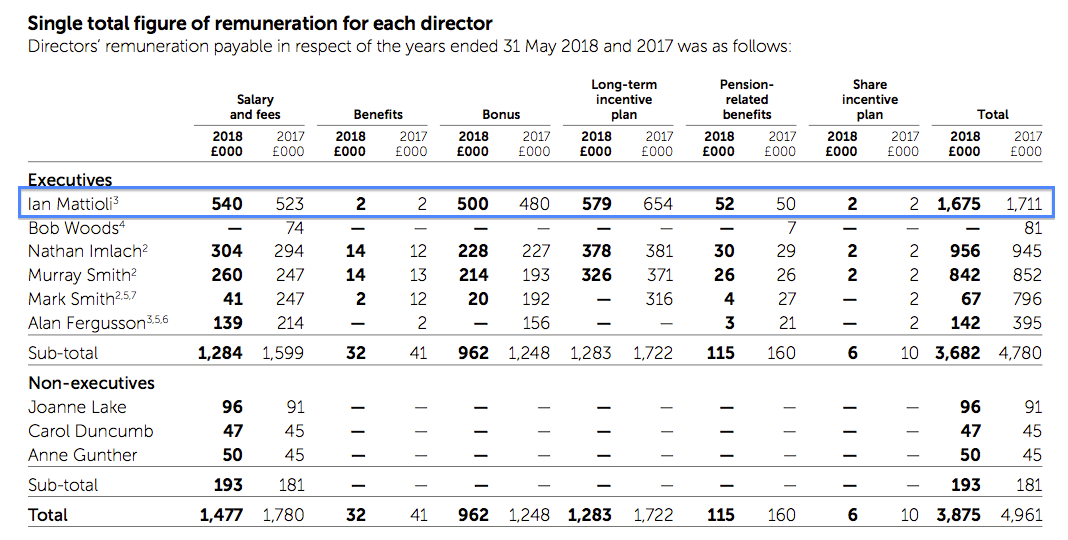 I should add that Mr Mattioli’s basic pay has soared 138% during the last five years. At least shareholders’ income has matched that surge with a 143% dividend gain.

We can use SharePad’s News tab to discover what may have caused the shares to trade at a one-year low:

“As reported by many participants in the UK wealth management sector, we have seen a lower level of client activity over the summer months, attributed primarily to poor investor sentiment and prolonged uncertainty over Brexit.”

“The impact on revenue of this and reducing clients’ TERs has been more than offset by resource and other administrative cost savings, resulting in EBITDA margin for the year to date tracking substantially ahead of target.”

Nonetheless, Mattioli has “medium-term goals” of advancing revenue to £100m (versus £59m for 2018) and assets under management, administration and advice to £15 billion (versus £8.7 billion for 2018).

I have to admit, doubling the size of the business within (perhaps) five years — equivalent to an average 15% compound growth rate — appears quite ambitious.

And no doubt Mattioli’s cash resource — approximately £13m excluding regulatory requirements — has already been earmarked for acquisitions to achieve the targets.

However, I do wonder whether shareholders will be asked to supply extra cash for even more acquisitions to ensure the medium-term goals are met. 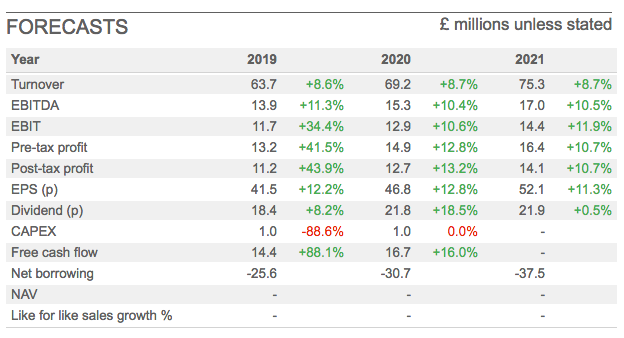 My thoughts on Mattioli are mixed.

I certainly can’t argue with the group’s track record.

In particular, those charts showing revenue, profit and the dividend rising from bottom-left to top-right are very compelling. The presence of a founder boss and significant net cash is very persuasive, too.

That said, Mattioli has its drawbacks — not least because expansion appears dependent on continual acquisitions and the recruitment of additional specialist consultants.

Indeed, the group’s sales per employee trend does not suggest this is an incredibly ‘scalable’ business.

The return on equity sums do not look great either.

Mind you, Mattioli does enjoy a substantial level of recurring income from its clients. Such regular fees may provide some welcome earnings stability in today’s tricky markets.

In fact, investing guru Warren Buffett provided some comfort for financial-sector shareholders this year when he wrote:

I will leave you to decide whether Mr Buffett’s wisdom — and all of those SharePad charts — are convincing enough to become a Mattioli shareholder.

Disclosure: Maynard does not own shares in Mattioli Woods.