What really makes a great business?

To identify great businesses we must go beyond the numbers and understand what causes them. In this article I revisit 4Imprint, an investment I should have made in 2013, and a business probably still worthy of investment today.

Back in May 2013 I wrote excitedly about a company selling promotional products to US companies. 4Imprint’s Direct Marketing division, originally a catalogue operation but by 2013 a fully fledged ecommerce site, had grown to be the company’s biggest and most profitable division. It seemed like an excellent business.

Ninety-six percent of the division’s revenue was earned in North America (97% today), where the company claimed to be the biggest direct marketer of promotional goods. Today it still makes that claim, and says the market is worth $25bn. Promotional products are given out at conferences and trade shows, or as part of campaigns in the workplace or on the street: bags, pens and wristbands, for example, printed with a corporate logo or message.

It may sound like a dull, even old-fashioned industry pedalling tat, but if you spend time on 4Imprint’s website or read the annual reports I challenge you not to be enthused. 4Imprint looks after its employees and they look after the customers. I fell in love with 4Imprint because a business is not a table of ratios and numbers, it is a group of people co-operating to profit. The numbers are merely the product of this endeavour. The proof of the pudding.

I tell you this, not to demonstrate I am a great investor, but to show you what an absolute idiot I can be. Not only did I fail to buy the shares, which is understandable as I take my time getting to know investments, I failed to put 4Imprint on my watch list. It was an idea that flashed brightly and then vapourised until I read this tweet over five years later (two weeks ago):

Super high quality company. If you give them any credit for the marketing spending they are doing, and the fact they spend to acquire customers ahead of the profits, it’s not expensive either. 20x on reported numbers.

It is only fair to show you the gains I forwent: 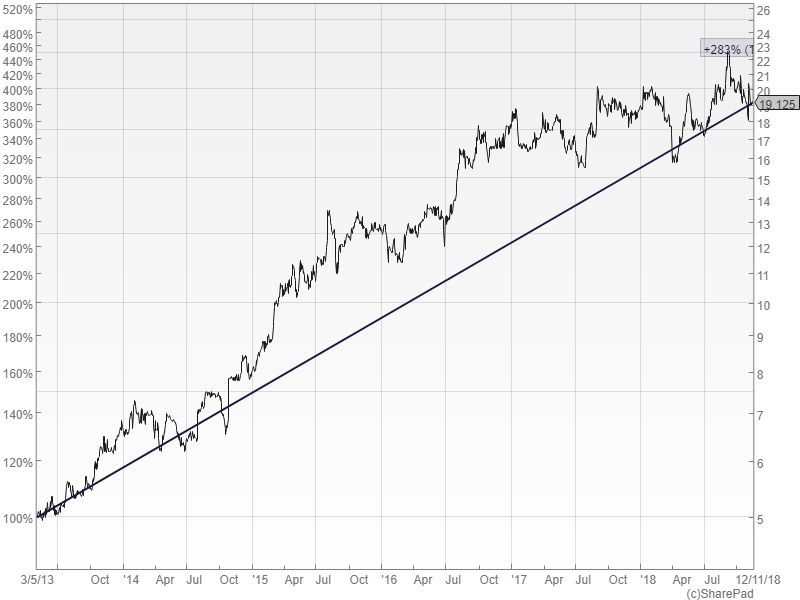 As many investors have learned the hard way a rising share price does not necessarily make a good investment, but before I use SharePad to check the pudding is still warm, I should explain the corporate culture that attracted me to 4Imprint in the first place, and provide some evidence it still exists.

Lyons-Tarr guided the company as it built the website, refined email campaigns, and optimised its administrative system to link customers to suppliers. 4Imprint does not manufacture, print, or ship goods, suppliers do. The company sits in the middle, which means it does not tie up capital in equipment and stock, and it can offer millions of potential customers tens of thousands of customised products. It migrated to the Internet early, and today, as in 2013 when I first checked, if you type “promotional tee-shirt” or “promotional pen” into Google, 4Imprint is the first result.

I believe the company can grow its market leading position because it is continuing to invest in customer services, technology, and employees. The company promises customers the lowest price or to double the difference, on-time dispatch or the order is free, and satisfaction guaranteed (by the chief executive), the same promises it was making when I first investigated in 2013.

It seems probable only the biggest company with the most efficient systems can sustain promises like this, especially if it is a really great place to work, which, by all accounts it is. 4Imprint says so. The happy smiley faces of employees adorn the website and annual report. Training is not restricted to business skills, but also personal development, wellness, and general education. All staff are eligible for quarterly bonuses and can participate in share schemes.

The staff say so too. In surveys, 4Imprint has been named a Great Place To Work every year for the last ten years, and employees talk up their company on job sites like Indeed.com and Glassdoor.co.uk.

Maybe I’m being sentimental, but I think the numbers tell the same story.

This chart from the Summary page in SharePad shows how 4Imprint revealed the profitability of Direct Marketing as it disposed of sometimes loss-making and more capital intensive parts of its business: Brand Addition, a UK wholesaler of promotional goods, in 2012 and SPS, a UK manufacturer, early in 2014. From then on, Direct Marketing stood alone as 4Imprint’s only business: 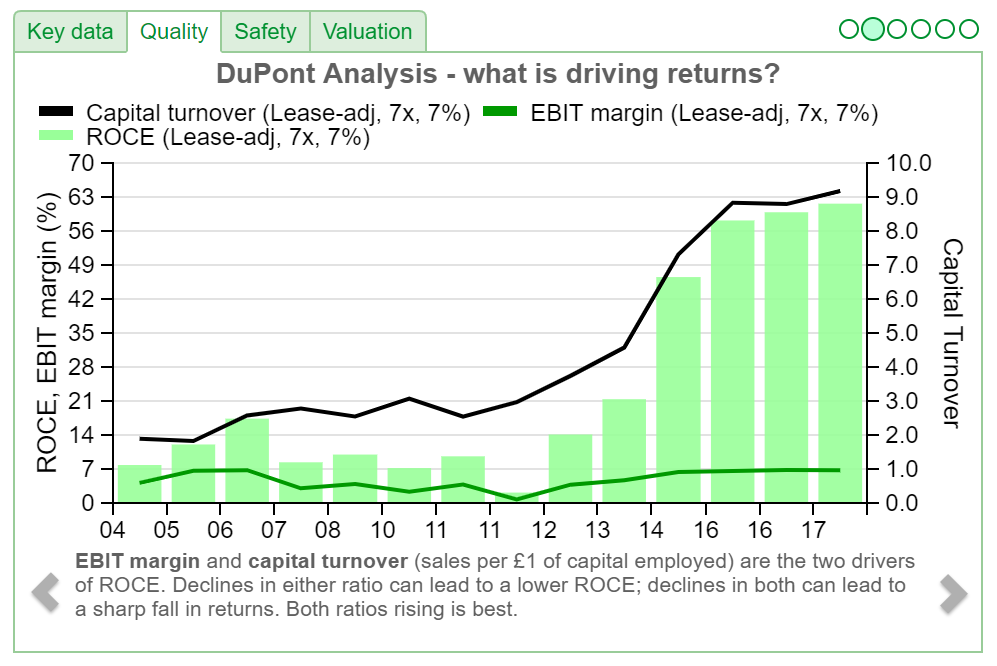 The company has grown too. Instead of plotting annual revenue and profit, it is easier to see whether growth is speeding up or slowing down by plotting the percentage change in growth each year, which we can do using SharePad’s financial charting facility: 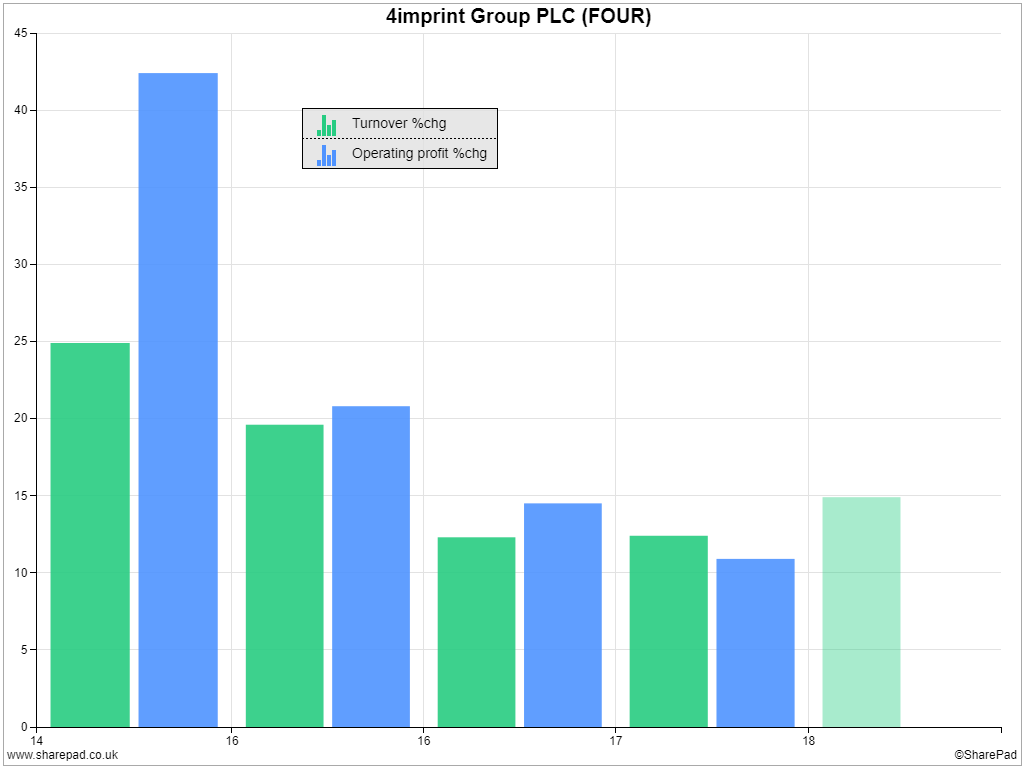 Although the axis labels two years “16” in the chart above, the results for the first of them are for the year to the 2 January 2016, in other words for 2015.

As you can see, 4Imprint has grown revenue (labelled turnover) and profit at quite a clip since it focused on direct marketing, but revenue growth has slowed to about 12% in 2016 and 2017. Analysts predict revenue will grow by about 15% in the current year, but profit growth will slump to 8%.

This begs at least three questions, why do analysts think profit growth will slow as revenue growth increases? Are the variations we see now, typical? And what can we expect in the future?

To answer the first question we can look at what the company said in the annual report for 2017 and what it has subsequently said (using SharePad’s news section) to understand what may have influenced analysts expectations.

In March, 4Imprint started advertising on TV and Radio. It told investors it was doing this in 2017’s annual report published about the same time, and that it expected that the cost of the campaign, about $7m, would drag on profit in 2018 because this is a new form of marketing (in addition to the $100m plus it spends on direct marketing), and it takes time to test and refine advertisements and build brand awareness. Profit, the company said, would probably be flat in 2018, but it expected profit margins to recover in “subsequent years”.

At the time of the half-year results and in a trading update earlier this month, the company revealed the advertising has produced quicker results than expected and so it will grow profit a bit after all. You can see how analysts have changed their minds as 4Imprint has played with their expectations in the Forecasts section of SharePad (Financials tab). The green line shows how their aggregate forecast for the year to December 2018 has changed over time: 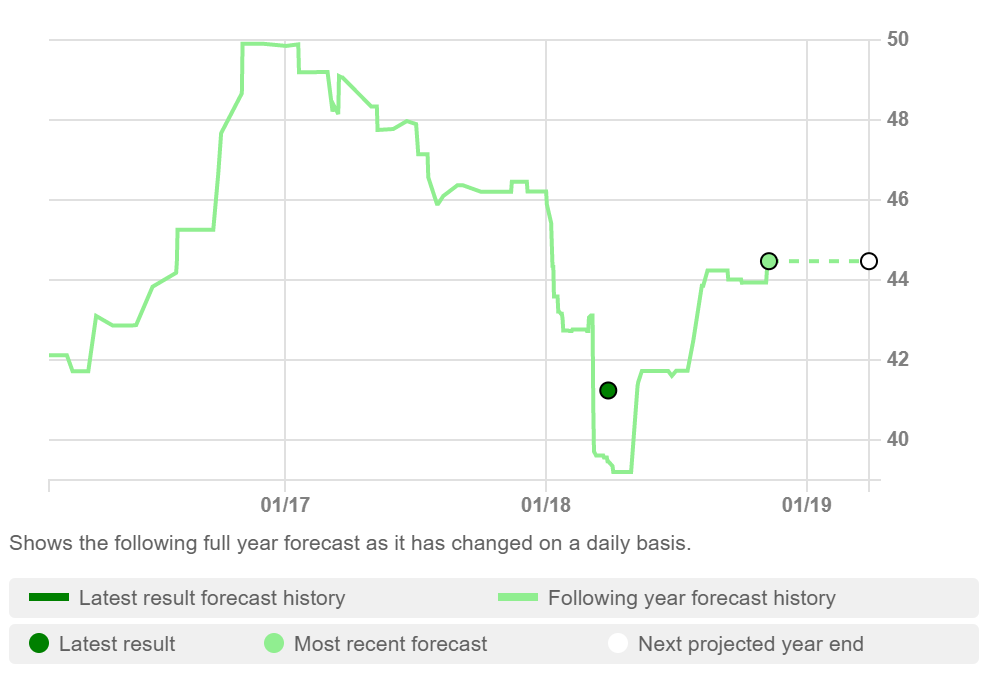 To answer the second and third questions, we will have to get our hands really dirty. Before 2014, Direct Marketing’s revenue and profit growth was hidden in the consolidated figures for the whole company including Brand Addition and SPS. 4Imprint did, however, break out revenue and profit figures in the segmental report, in the notes to each of its annual sets of accounts: 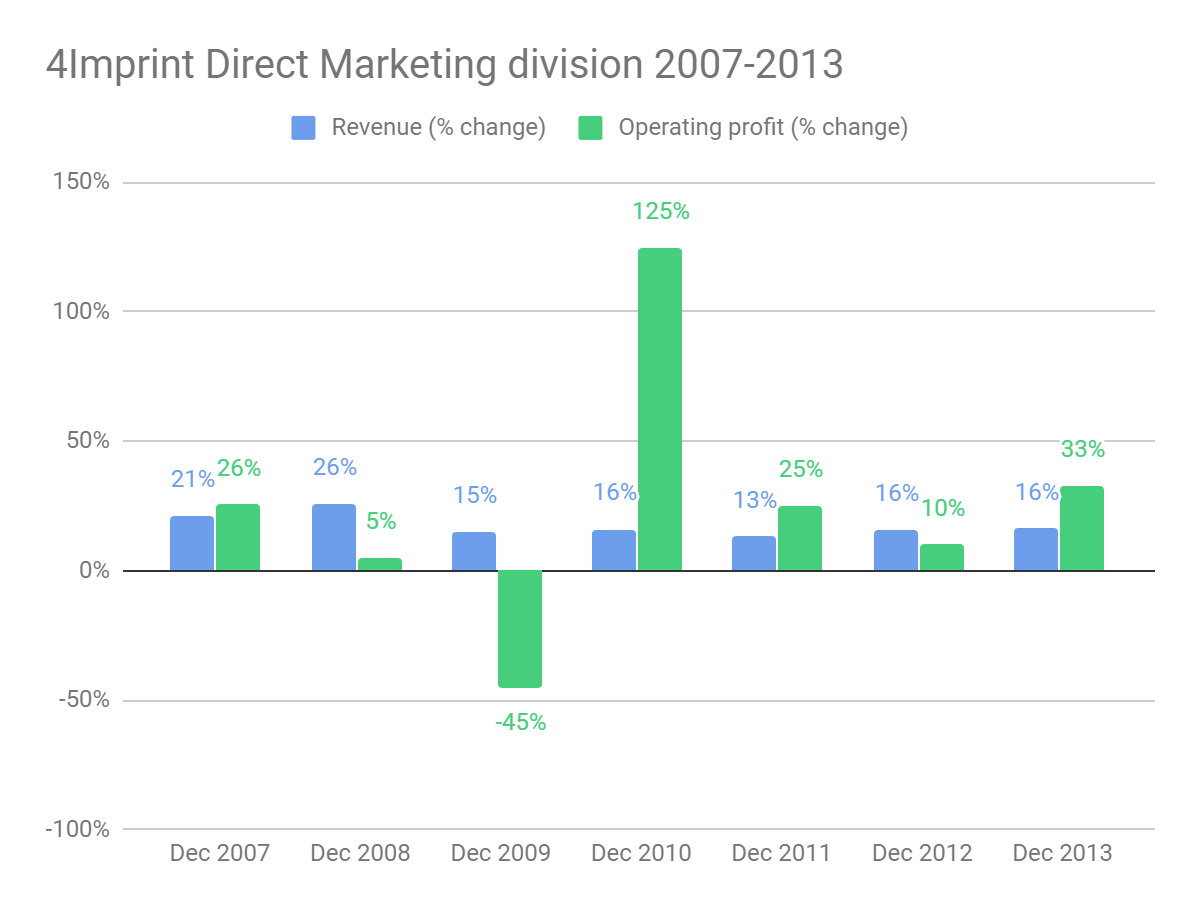 Revenue and profit grew in six of the seven years, but in 2009 Direct Marketing’s profit almost halved during the recession that followed the financial crisis. We can well imagine why: companies cut costs in recessions, and they are probably less inclined to give away freebies.

This explains 4Imprint’s policy of maintaining a stable and secure balance sheet. At the year end it had no debt and £30m of cash, despite having paid a special dividend and reduced the pension obligation to a point at which I don’t think we need to worry about it.

Financial strength gives the company an offensive capability as well as a defensive one. If it can continue investing while rivals cut back, it will gain even more market share in recessions than at other times.

SharePad calculates the shares are valued at 23 times 2017’s earnings on a debt-adjusted basis so investors must weigh up a slightly immodest valuation against the likelihood 4Imprint will remain a “super high quality company”, gaining market share and remaining very profitable in the vast majority of years.

For what it is worth, 4Imprint is targeting $1bn revenue by 2022, which implies a compound annual growth rate of 10%, below the historical rate. It may be a soft target, or it may be that 4Imprint is so big it is finding it harder to grow. Even at $1bn though, its revenue would still only account for 4% of the current market size so I don’t think there’s much danger of growth maxing out.

I may well invest. And I certainly won’t carelessly forget 4Imprint again.