Working out what could go wrong with a share

Investors pin their hopes on what could go right. The great product. The winning strategy. The growing market. The new technology. These may be good reasons to own a share, but only if you have also considered what could go wrong.

In my last article I left you on a cliff-hanger. I described power adapter manufacturer XP Power’s strategy as “credible”. In fact, I think it’s a beautiful thing. Each decision the company has made reinforces others. That’s what makes XP a formidable competitor and a highly profitable company.

But how formidable is it? Or, to put it another way, what could go wrong?

It’s easy to ignore the principal risks section of a company’s annual report because it’s tucked away deep inside the document, and risks are often bland and generic. Companies with factories need contingency plans should there be a fire, for example, but I assume they will have these risks covered.

I concentrate on competitive threats as a means of testing the strategy and determining whether the company will prosper. XP’s risk report is on page 29 of its 2017 annual report, published last week. It identifies two competitive risks: new technologies and emerging low cost manufacturers in Asia:

I think XP’s claim that it stays up-to-date with new technological advances is evident. For example, the fan is the most unreliable component in a typical power converter, so XP has developed “ultra-high efficiency” converters that do not require a fan. They’re so cool, other components last longer too. Of the 47 new product families XP Power introduced in 2016, 33 were ultra-high efficiency.

A new rival must not only compete with XP on technology and cost, it must also sell the product, sometimes far away, in Europe or the USA, where the customers are. This is XP’s original competitive advantage, built up in the previous decade when it was a distributor. Its products are designed into machinery – which requires collaboration – and it has the largest and most technical engineering sales force in the industry. It would be really tough for a new entrant to pose a big threat even if, say, it managed to develop a competitive technology, since XP excels on all these fronts and is itself always improving.

Sometimes a company can look strong in good times, only for cracks to appear when the economy slows.

XP has a fairly standard explanation of the risks:

But its business model is likely to be resilient. The revenue annuities XP describes refer to the fact that once a converter is designed into a machine, it’s unlikely the manufacturer will swap it out for one made by another company. It would require elements of the machine to be redesigned and retested. XP can count on revenues for many years and it doesn’t have to worry as much as it might that customers will switch to cheaper rivals when times get tough.

The company says strong profit margins reduce the risk of a downturn (sales could fall significantly and the company would remain profitable). We can check this easily in SharePad by plotting a financial chart: 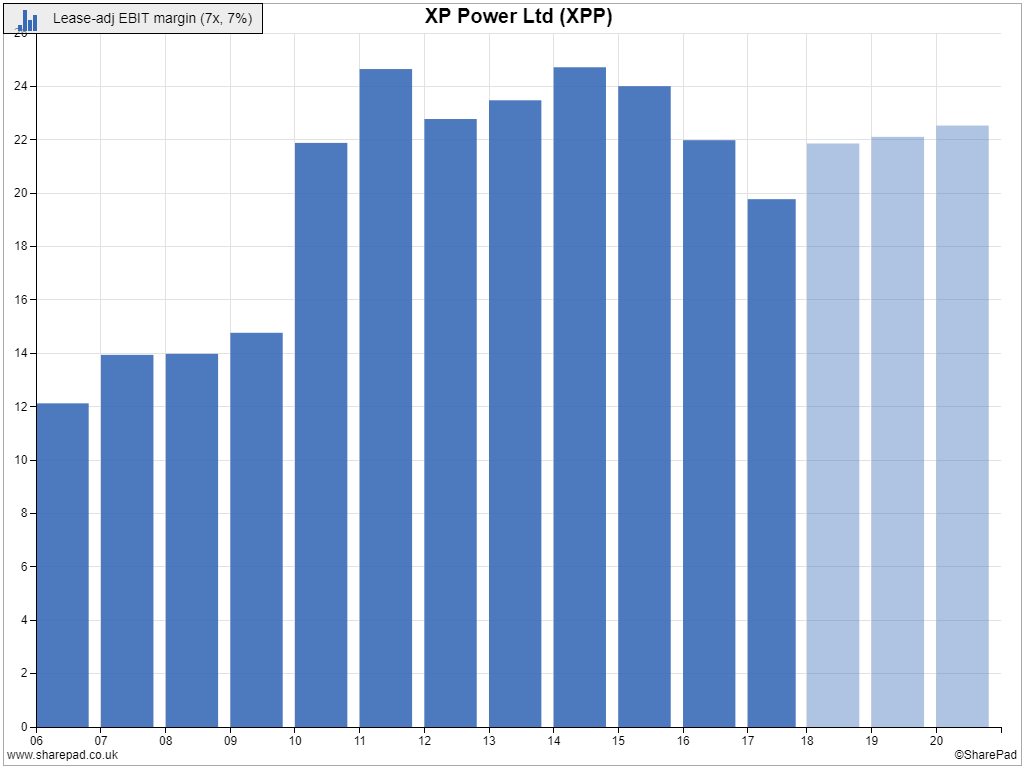 Even though some customers, for example semiconductor machinery manufacturers, are more cyclical than others, like medical equipment manufacturers, XP’s profit margins are generally high.

The biggest fluctuation in recent times was positive, from low double digit margins before 2010 to profit margins of more than 20%. Far from being a hostage to fortune, XP’s improved performance then was the result of a change in strategy: the launch of its own-designed and manufactured products.

The fact that XP’s converters are designed into machines, also reduces the risk of dependence on big customers, since those customers would be most unlikely to switch all their business to another supplier in one go. XP has big customers. The biggest contributed 11% of revenue in 2017, up from 7% in 2016, but this may be evidence the strategy is working. One of the company’s goals is to supply more adapters to its biggest customers.

Elsewhere in the risk report XP reveals that its biggest project only accounts for 4% of revenue.

I’ve dwelt on XP’s strategy, and the risks it faces, because the strategy is coherent, and it addresses the risks. Analysing companies is like solving a puzzle and I think I can piece together enough of the XP puzzle to be confident the company will prosper.

The business model and strategy should deter competitors, which is why I like companies that are self-assured enough to describe what makes them special.

Not all companies lay things out so clearly. When they don’t, we should question whether they’re pursuing an effective strategy.

Here are a couple of puzzles I can’t quite piece together at the moment, even though I’m drawn to the companies concerned…

For many years now Haynes, the publisher of the famous motor manuals, has warned of declining DIY activity (see P. 18 of the 2017 annual report):

When I bought my first car in the 1980s the Haynes Manual was often the very next thing you bought, probably before your first tank of petrol. Today, though, cars are more complicate, and therefore difficult for individuals to service and maintain. They’re also more reliable and require less maintenance. Many of us who once serviced our own cars take them to the garage now.

Haynes is facing up to the problem. It has broadened the group’s revenue base and geographic sales territories through the development of HaynesPro, which sells products delivered over digital delivery platforms to the trade: professional mechanics and parts suppliers. Thanks to an acquisition over a decade ago, most of HaynesPro’s customers are in Europe.

But I don’t think Haynes is fessing up to the whole problem. On the consumer side, the dwindling pool of DIY mechanics help each other for free on YouTube and motoring forums. Haynes has made unsuccessful attempts to launch online delivery platforms for you and me but I wonder if it can ever compete with free advice.

My main frustration with Haynes, though, is that it doesn’t tell us enough about HaynesPro to complete the puzzle. Though I believe it’s very profitable, Haynes doesn’t say how profitable HaynesPro is, and so I’m still groping for the missing piece in the puzzle.

On The Beach is one of a new breed of package holiday companies that doesn’t operate hotels or planes, instead it buys rooms from wholesalers – so-called bedbanks – and buys flights from low-cost airlines, combining them into packages and selling them through its eponymous website. Low overheads and the large choice of holidays made possible by ‘dynamic packaging’ mean the company is highly profitable and growing fast, but its principal risks section makes me nervous.

On The Beach’s Risk Management Report (on page 23 of its 2017 annual report) tells us one of its biggest suppliers is unhappy:

Ryanair is suing On The Beach and other online travel agents because they ‘scrape’ data from its website (allegedly stealing Ryanair’s intellectual property) and then sell tickets on for a profit. We know Ryanair is a significant, albeit unwilling, supplier because On The Beach tells us:

I don’t have a view on the legal case, but I think I’d need one to invest. I get very nervous when I see companies at odds with suppliers.

Because of On The Beach’s high valuation (its debt-adjusted PE is 32 according to SharePad) I’m content, for now, to focus on puzzles I might find easier to solve.

As investors, we don’t have to solve every problem, just enough to populate our portfolios.