New companies for the watchlist

Richard surveys the latest annual reports for promising long-term investments. Big Technologies, Digitalbox, Somero, and Xaar catch his eye, but only one of them holds his gaze. Still, a strike rate of one out of four is not bad.

Almost every weekday I open a table of all the shares listed in London in SharePad and apply a custom Design view, which I have named *Notes*.

Any company with a note is in my watchlist, a candidate for investment (subject to more research).

The list is ordered by Previous annual report, so companies that have published annual reports recently are at the top.

The “Year considered” notes field contains the year I last thought about investing in a particular share, however briefly. If I have not considered it this year, it will say 2021 and its appearance at the top of the list is my prompt to re-consider it.

This involves scanning the company’s financial record in SharePad to assess whether it has been profitable, gash generative, and has grown under its own steam (i.e. without raising money by issuing lots of new shares to investors or borrowing an ever increasing proportion of capital employed).

I will also check out the company’s single page summary, to find out how it makes money and whether the directors own a substantial part of the business which I believe is more likely to focus them on its long-term success.

When I have considered the company I will type the current year (i.e. 2022) in the Year considered field and, if there is the slightest possibility I might want to investigate further, I will add a note.

Here are three examples where the possibility is quite slight, but I am nevertheless interested:

Somero, comes up year after year

Somero is much discussed among private investors, and somewhat loved. Most years it is highly profitable, probably because the equipment it manufactures to lay concrete floors is uniquely good at the job.

To invest, I would have to get over the construction cycle. Builders or rental companies are unlikely to have the money or inclination to buy expensive equipment in a downturn, and Somero’s results show that it has made losses in the past.

Somero is almost certainly a good business, but due to the occasional bad year it does not make as much money as we might think over the long-term.

The main thing stopping me from investigating further is timing, which is critical to returns because the changing fortunes of the industry have a dramatic impact on the share prices of companies serving it.

The best time to buy the shares would be when sentiment is weakest (or just rebuilding), and the best time to sell them is when it is strongest. That to my mind makes it a share for traders rather than buy and hold investors like me.

It has been highly profitable in the past when it was first to market a digital printhead in an industry that still printed the old-fashioned way, but copycats have quickly followed it into this market and eroded its profitability.

An added complication is the cost of inventing better printheads. If the company does not find a market for its investment, losses follow.

Xaar does all the work, but does not reap all the benefits. Sometimes it reaps none of it.

Shareholders have experienced losses in recent years, but the company is two years into a strategy established by John Mills, appointed as chief executive in 2021.

One of the problems Xaar’s previous strategy tried to address was that the printhead manufacturer is a long way from the end customer, a printer of tiles in China, say, which was its last breakthrough market.

Historically, it has not been able to convince them to stick with its products.

The company has made difficult choices, which is always a good sign. It has decided to target printer manufacturers and systems integrators exclusively, by ceasing to supply third party distributors.

It has acquired the capability to offer complete ink delivery systems comprising ink supply and electronic control systems as well as the printhead. It also sells inks made by third party suppliers, which it works with during printhead development.

I am tempted to evaluate Xaar because it is a local company, and if I were to get my hands dirty in a turnaround situation it would probably be in a business that I might easily get to know well.

The difficulty with turnarounds though, is working out whether the company is creating new competitive advantages.

Xaar reported a return to profit (on an adjusted basis) in the second half of the financial year ending in December 2021, which may be an early indication the strategy is working or a temporary uptick in performance.

As someone that makes a living selling articles, I am attracted to publishers like a moth to a flame. Sharing knowledge, or mirth, is intrinsically worthwhile yet the way we make money from peddling content is riddled with conflicts of interest.

I may have mischaracterised the owner of the Daily Mash by describing it as clickbait dreamed up by admen to turn us into gerbils. The analogy I was reaching for was actually hamsters on a wheel.

For all I know the company has a deep and meaningful core purpose, but having sampled some of the merchandise, I do not think it can complain about me being glib.

To invest in the company, I would have to satisfy myself there is more to it than stealing people’s attention on social media for a few seconds and funnelling it to advertisers.

Incidentally, do not be misled by Digitalbox’s long and woeful financial history, or its sector classification as a financial company. Before 2019, Digitalbox was a cash shell, essentially a listed entity without a business. In 2019 the listing took over the business, in what is known as a reverse takeover.

These three companies are likely to remain curiosities to me.

My first impression of Big Technologies, which floated in July last year, is more positive. It has more of the qualities I can get behind.

It was founded in 2005 by Sara Murray OBE who is the company’s chief executive and retains a 25% shareholding.

Initially she was inspired to create a device to allow parents to track their kids, but a large number of customers turned out to be buying it to track their elderly parents.

The popularity of the product led to the development of a smart tag used by the NHS to track mental health patients in the community, and then the police for victim support and witness protection.

In 2012, Big Technologies won a contract to supply the Ministry of Justice with smart tags to track offenders, which opened doors around the world. It says the opportunity to develop the criminal justice market has been so big, it has not fully capitalised on health and social care.

In the year to December 2021, Big Technologies earned most of its turnover abroad, 58% of it in the Asia Pacific region, and 38% in the Americas.

Curiously, despite the fact that its UK home market was its first, the company has not penetrated it as successfully as some overseas markets. It has made only minor inroads in the US as well, which it describes as a “high value” market along with the UK.

Add back amortisation of acquired intangible assets and one-off costs relating to the flotation (IPO preparation costs and the national insurance payment on the exercise of warrants) and adjusted operating profit is £16.5 million. The adjusted profit margin is 45%.

On the face of it, Sara Murray has built a decent business, and her continued involvement and commitment makes it more interesting as an investment.

There is of course the ever-present fear with IPOs that insiders listed the company at the best possible time to achieve the best price. 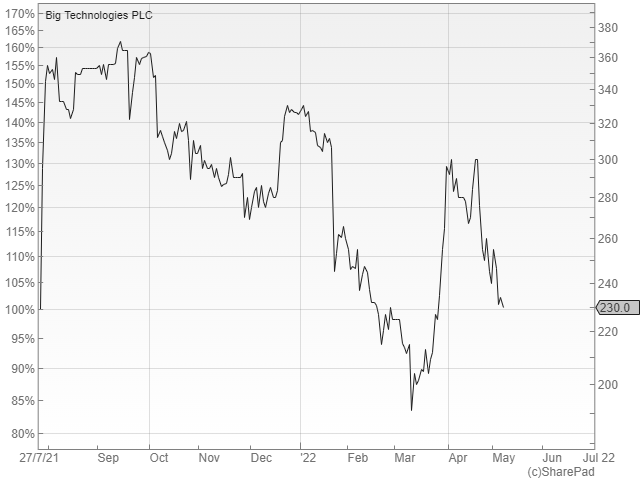 SharePad calculates that, at a share price of 260p, about 10% above the IPO price, Big Technologies has an Enterprise Value (market capitalisation less net cash) of £706 million. That means the business is valued at 43 times adjusted profit.

It is an eye-catching price, but Big Technologies would appear to have many opportunities to grow and its business is underpinned by long-term contracts (big customers contract for 3 to 5 years) and recurring software fees.

The big question is whether the company will win more contracts in markets like the UK and the US, when the authorities next put them out to tender.

Big Technologies believes that long-term contracts have created a disincentive for its competitors to innovate, and it has the technologically superior product.

It seems unlikely the technology, a GPS enabled band tracked in the cloud, would be difficult to replicate. On the face of it, it is similar to the rather basic technology used in the highly competitive vehicle tracking market, and a subset of the technologies in smartwatches and fitness bands.

More compelling perhaps is the company’s assertion that their competitors’ business models are based on the number of alerts they deal with, creating no incentive to reduce false alarms.

Big Technologies’ opportunity therefore is to sell the lower total cost of its solution. Its advantage may simply be that it is less complacent than its competitors.

2 comments on New companies for the watchlist