From ideas to investments: Investing in local heroes

Richard makes the case for investing in local firms, helped by analysts from The Yorkshire Fund. As usual, SharePad can help.

I am starting this article with a shout-out to the analysts of the Yorkshire Fund.

You probably have not heard of the Yorkshire Fund. We cannot invest in it. It is a mini financial institution, part of a Student Managed Investment Fund (SMIF) run by undergraduates at Sheffield University. Unsurprisingly it invests in companies based in Yorkshire.

I had the pleasure of attending the first conference of UK SMIFs at The University of York last week. It attracted a wide variety of speakers including academics, investors from large financial institutions like HSBC Asset Management and Schroders, a consultant, and me*.

How the Yorkshire Fund invests in local firms

The talk by second year economics student Ralph Atkinson about the Yorkshire Fund he manages stuck with me because, as he articulated, there are good reasons to invest in local businesses. 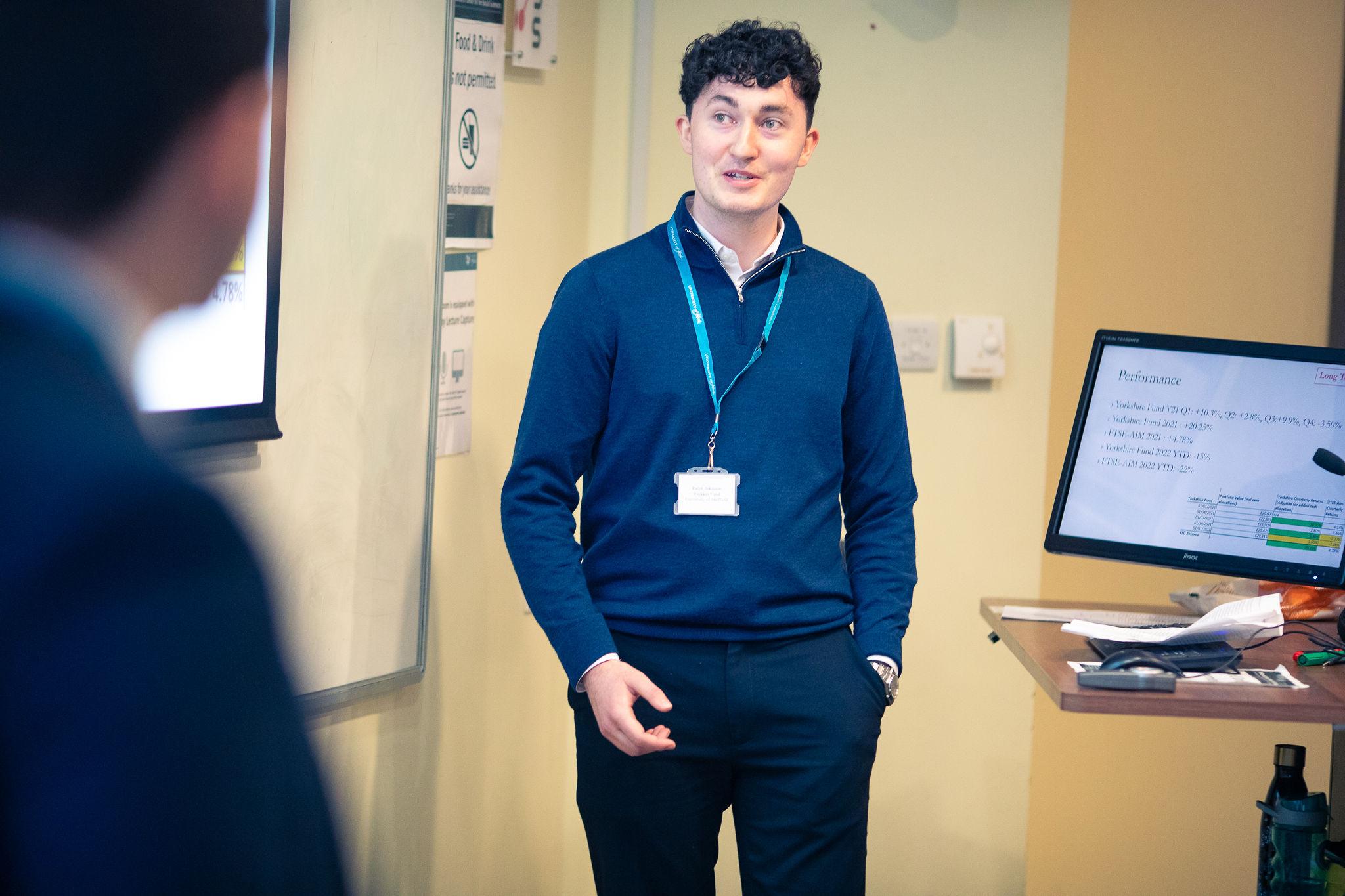 Ralph was initially sceptical of the idea of a Yorkshire Fund, which the SMIF established a year and a half ago. Investing is hard enough, he says, without limiting the remit so tightly, but he has learned that while the pool of potential shares is small when you go local, the opportunity to learn about them is large.

Focusing on local firms, many of them smaller companies, forced the four analysts in the Yorkshire Fund to rely on their own research.

To my delight, I discovered the team are fans of SharePad.

The team overlays careful analysis of credit ratings and interest payments on the quality metrics, allowing it to invest in companies that are more indebted.

One of the advantages of investing in local firms is they are nearby. The Yorkshire Fund has used this to its advantage. The analysts have met with Zoo Digital, which localises TV and film for some of the biggest names in the industry, security specialist Synectics, and game developer Sumo Digital (now owned by Tencent).

To get the most out of the meetings and make sure they are not blindsided by smart and charismatic executives, they go in with as many questions as possible, generated from what they have learned from the data, annual reports, and the local newspaper, the Yorkshire Post.

SMIFs manage real money, often donated by alumni. In the US, which has many well established SMIFs, some have millions of dollars of funds under management.

In the UK, SMIFs are still novel. York’s Griff Fund claims to be the oldest SMIF, established in 2013, although Sheffield’s Twikker Fund, Europe’s biggest, traces its origins back to 2012.

Twikker’s analysts manage about £200,000. £32,000 of the fund is invested in Yorkshire, a concentrated portfolio of ten shares: Billington, DFS, EMIS, Harworth, Jet2, Northcoders, Renew, Team17, Synectics and Zoo Digital.
It is early days, but the Yorkshire Fund is beating its index benchmark handsomely.

Finding local companies that are listed on the stockmarket is harder than you might think. Ralph says he did a lot of Googling until the Fund got access to S&P Capital IQ, a database for institutional investors that enables regional searches.

The Address and AGM Address table columns in SharePad tell us where a particular company is headquartered, and holds its Annual General Meeting.

SharePad holds two addresses because companies do not always hold their AGMs at their headquarters.

Before the pandemic, Next, the retailer, held its AGM at a large hotel on an anonymous motorway junction near Leicester. Some companies hold them at the offices of a broker or an adviser, usually in London. The Victrex AGM I attended in February was at JP Morgan, although Victrex is headquartered in the North West.

Happily Quartix’s AGM, which I expect to attend next week, is in my home town of Cambridge, although, as sometimes happens, the HQ is nowhere near its main centre of operations, which is in Newtown in the Welsh Borders.

While SharePad has an address for the headquarters of every UK listed company, some of the AGM Addresses are unknown (newly listed firms may not have had one yet).

Even though the AGM database is less comprehensive, it is very useful to know the AGM location for the majority of firms because companies that invite shareholders to their headquarters will often show them around.

At the very least we will form an impression of the part of the business the AGM is held in, and, if the company is more than just a stack of offices, we will probably also be shown the factory, warehouse, or design studio. Maybe we will get a chance to talk to employees.

In January, I attended the Treatt AGM, where shareholders were introduced to its new purpose built headquarters. It was a chance to see how our money had been spent.

Finding the names of companies headquartered in nearby towns and villages, is not possible directly in SharePad, but it can be achieved in about 15 minutes by exporting the names of the companies and their addresses from a SharePad table and importing the resulting file into Google Maps. 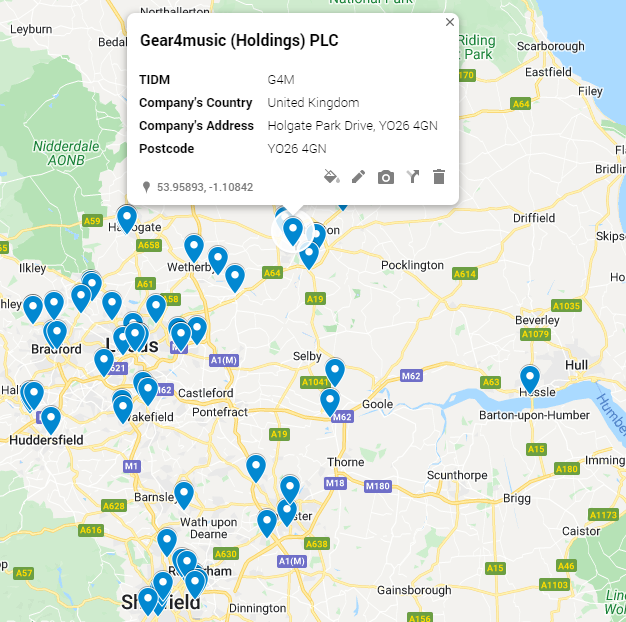 To save you the effort, I have created two maps, one for each kind of address held by SharePad, To find listed UK companies in any location simply zoom into one of these:

Since I do not do this very often and there are companies listing, delisting, or just moving their headquarters and AGMs all the time, here are instructions should you wish to create an up to date version of the map in the future:

In your spreadsheet programme (optional):

The errors are addresses Google cannot find. This time around there were about twenty in each dataset. Google helpfully highlights them in pink and puts them at the top of the list.

Usually an error occurs when there is a space or comma missing in the address. You will know if correcting that has worked because the row containing the company’s details will turn white.

If Google still cannot find the address, try deleting it and replacing it with the postcode on its own.

* I talked about reducing bias and improving decision making. Here’s a pic of me in action 🙂 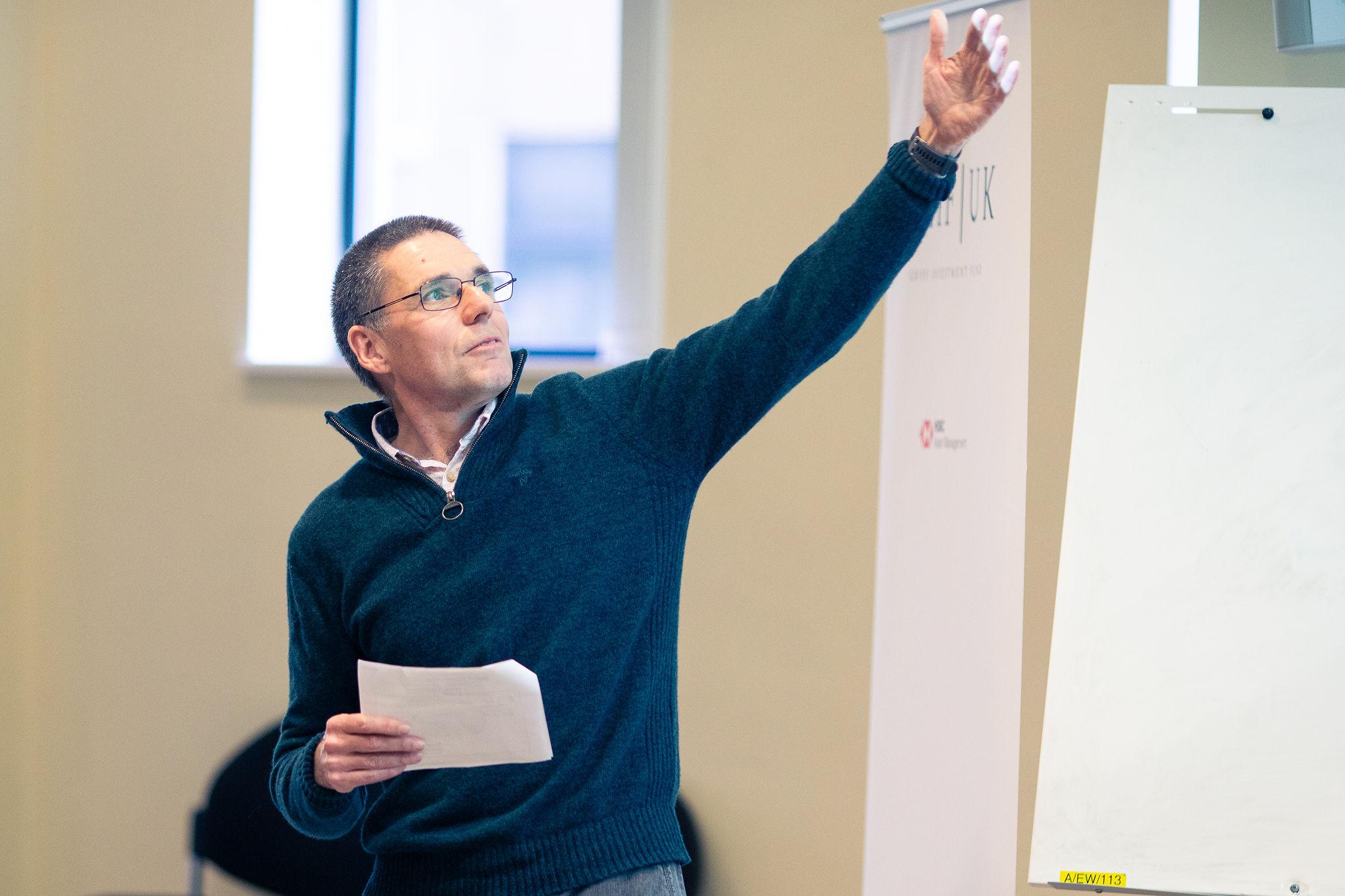