William, one of our youngest SharePad subscribers, gives us an update on his A level preparation and his latest swing trades using point and figure charts. Read his previous articles here.

It’s been a very busy start to the New Year with my A Level mocks, along with lots of studying ready for the Summer A levels.

I have been working on some new share trades and looking after existing trades.

There have been quite a few opportunities for swing trading on my point and figure charts over the past couple of months. I have tried to trade as many of them as my limited funds would allow. Also, the great thing about swing trading is how much I can learn from each trade. It is excellent practice for me. It’s helping me to test my techniques on point and figure charts (you can read more about how to use these in SharePad in this tutorial). 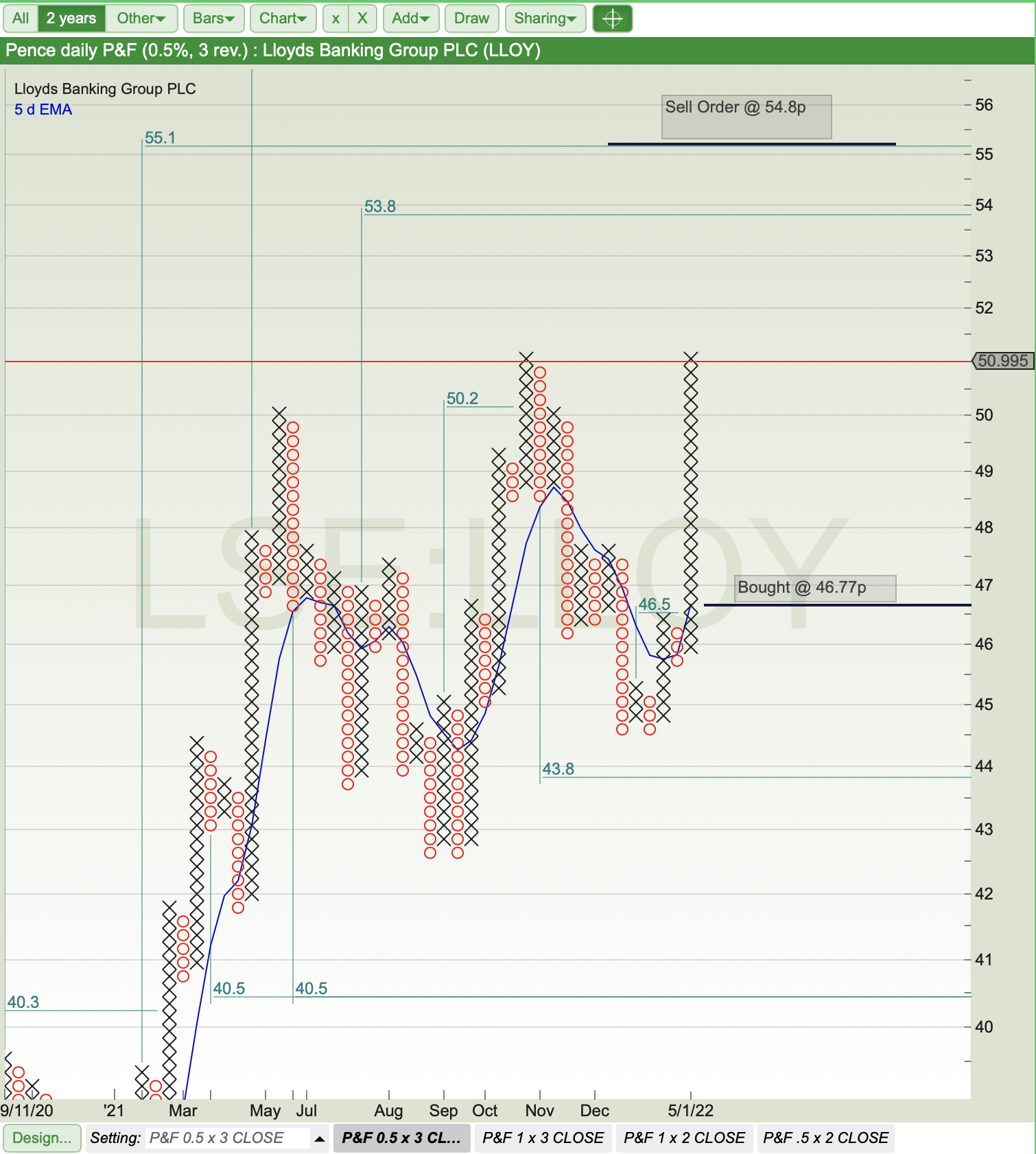 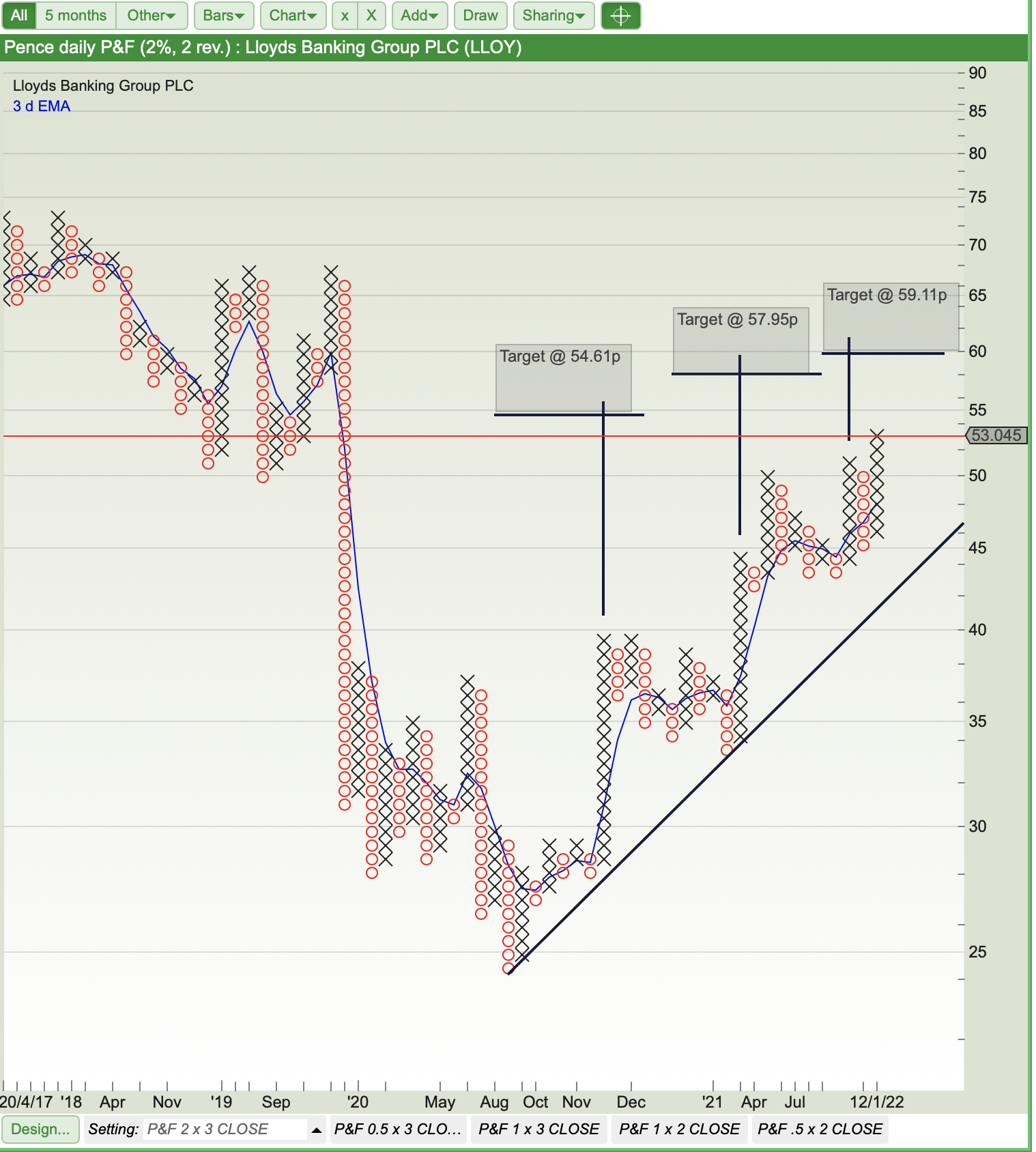 I checked the banking sector 2% x 3 close chart which was looking very positive. 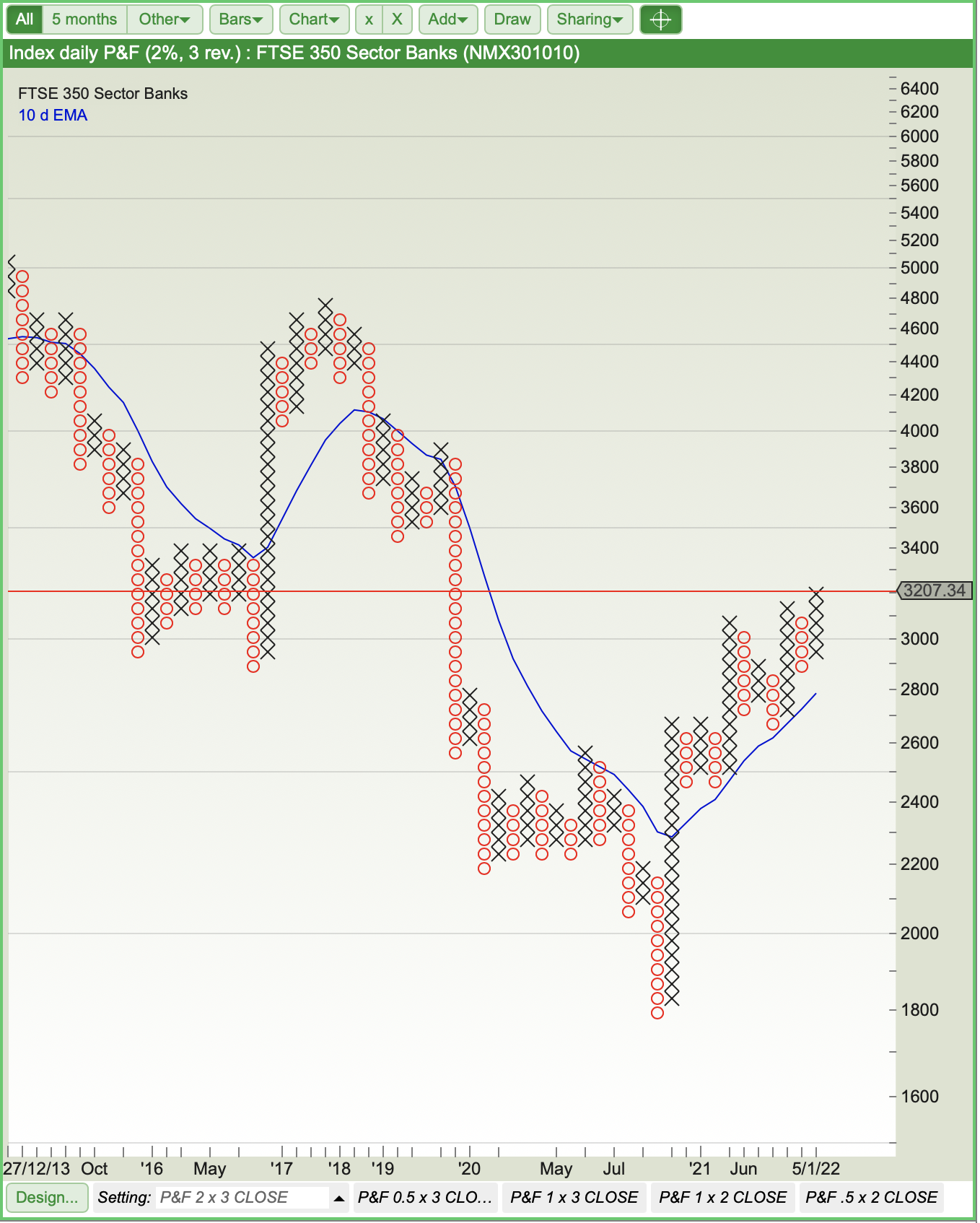 The risk/reward for this trade was as follows:

I usually look for a risk/reward minimum of 3:1. This trade at 5:1 was very good. 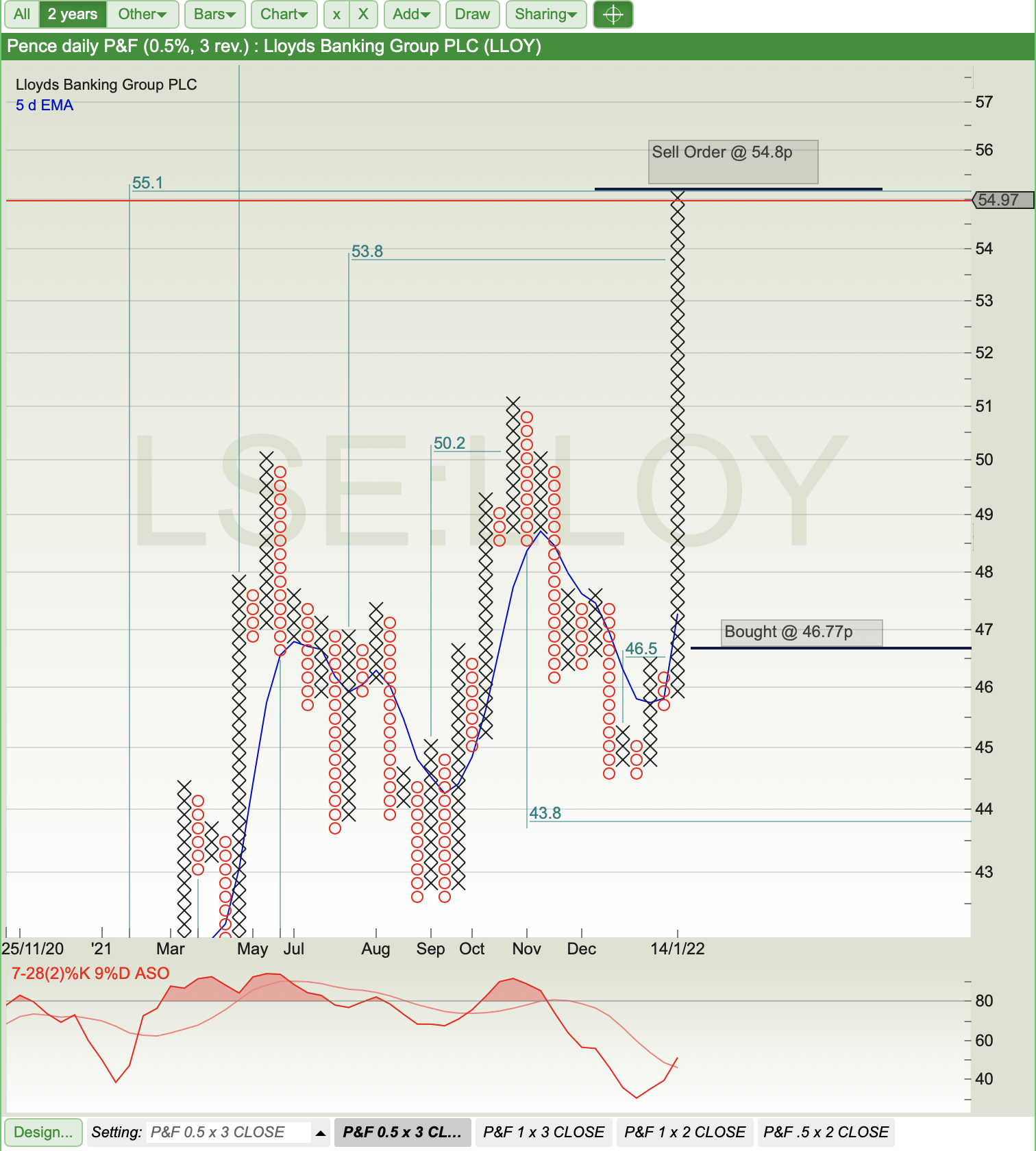 Close Brothers is a share I had been watching for a while to buy as a swing trade when a buying pattern formed.

I had already checked out the banking sector when I was analysing Lloyds. The 2% x 3 close sector chart was on a buy pattern and was in a column of X’s when I purchased CBG. 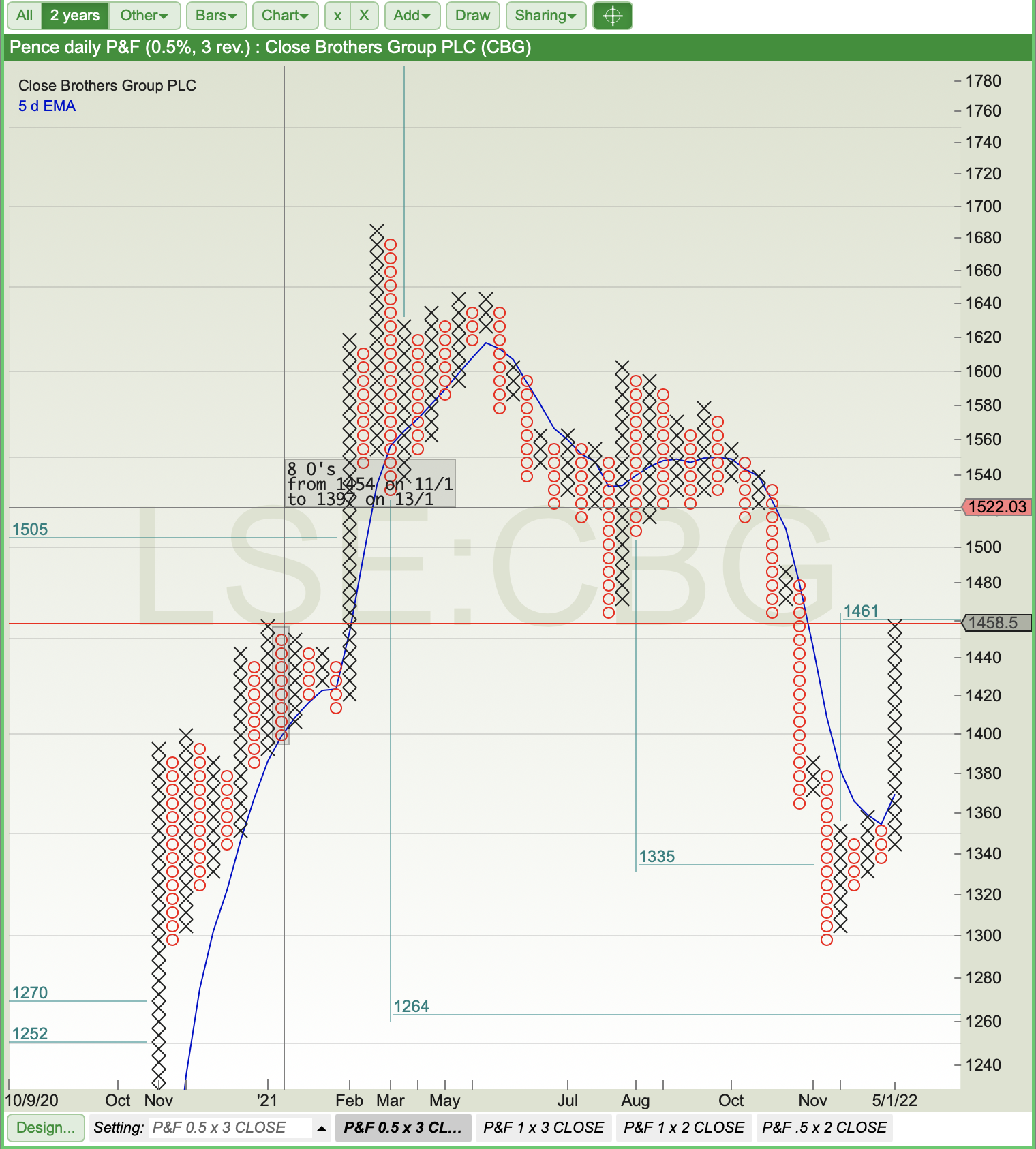 The 2% x 2 close chart, which I like to use for a longer perspective, showed the share was weak as a longer-term buy, so I wanted to get in and out quickly just in case it turned out to be a quick spike – which it was! 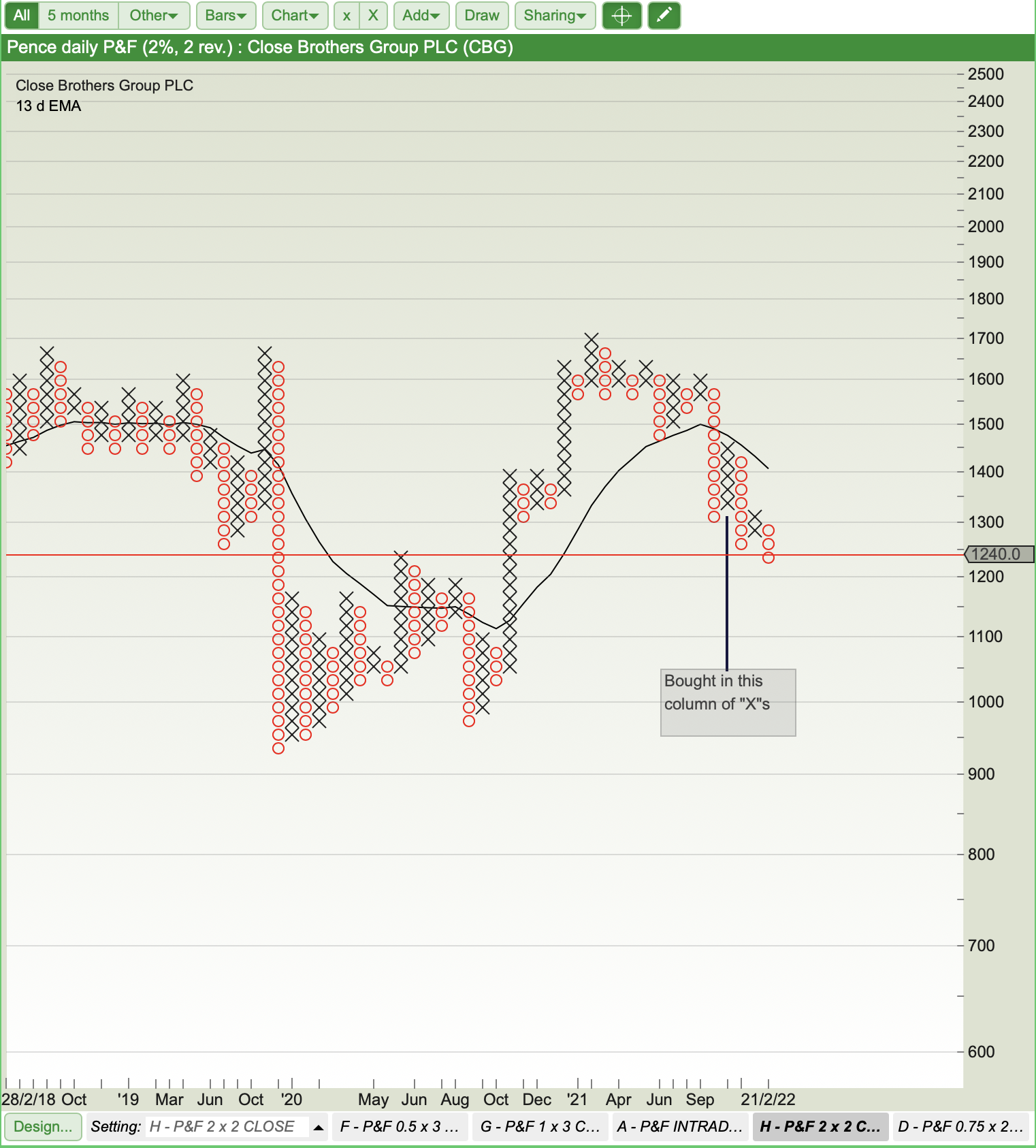 CBG was sold on the 5th of Jan when the selling order set at 1458p was filled.

I bought SSE at 1544p November 21 from the 1% x 3 close chart after a RNS price drop. I had a selling order placed at 1685p but actually sold at 1683p on the 4th of Jan. I will wait to see now if this share breaks through and settles above its 1690p resistance line before looking to buy again. I will also keep a check on it for any significant pull backs as long as it remains overall bullish. 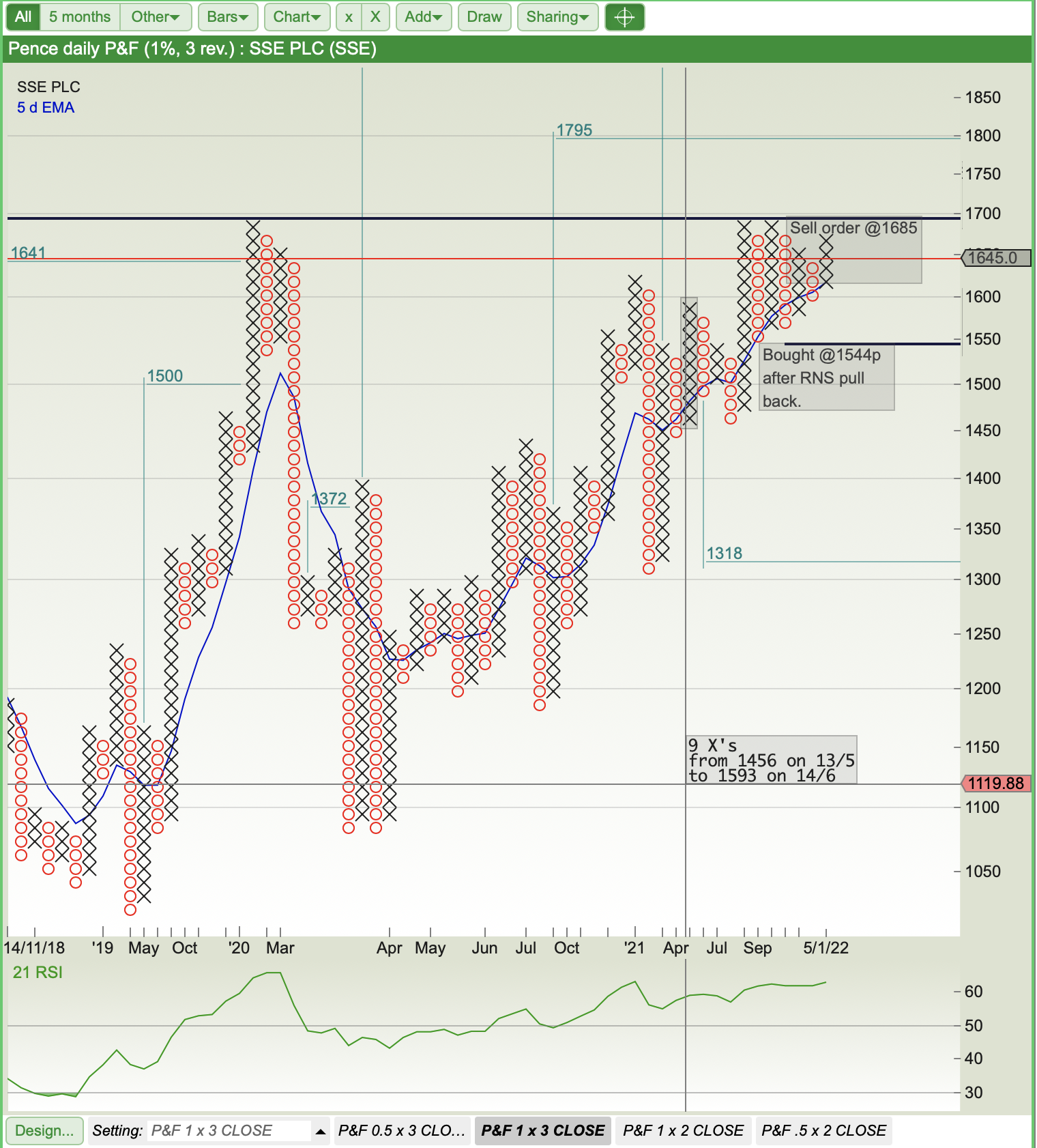 The electricity sector chart (2% x 3 close) had been in a buy pattern since November 20. When I bought SSE the chart was also in a column of X’s. 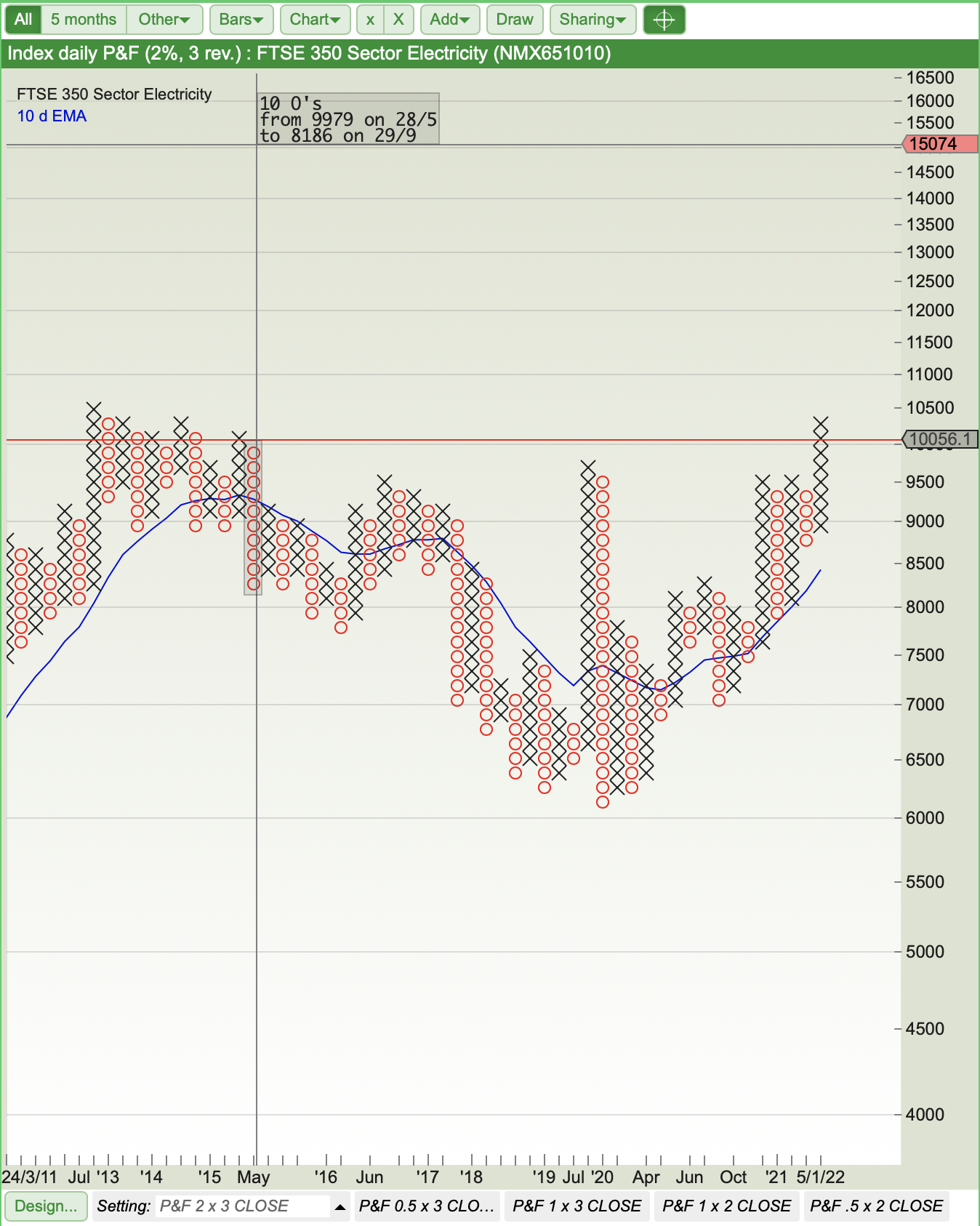 I previously bought and sold BAE last year. I had been keeping a close eye on the share with a view to buying again on a decent pull back. Well, it pulled back to a support of 533p on the 20th of Dec 21. I checked my 2% x 2 close chart for a longer-term perspective which was showing the share to be bullish with an upward target of 674p. 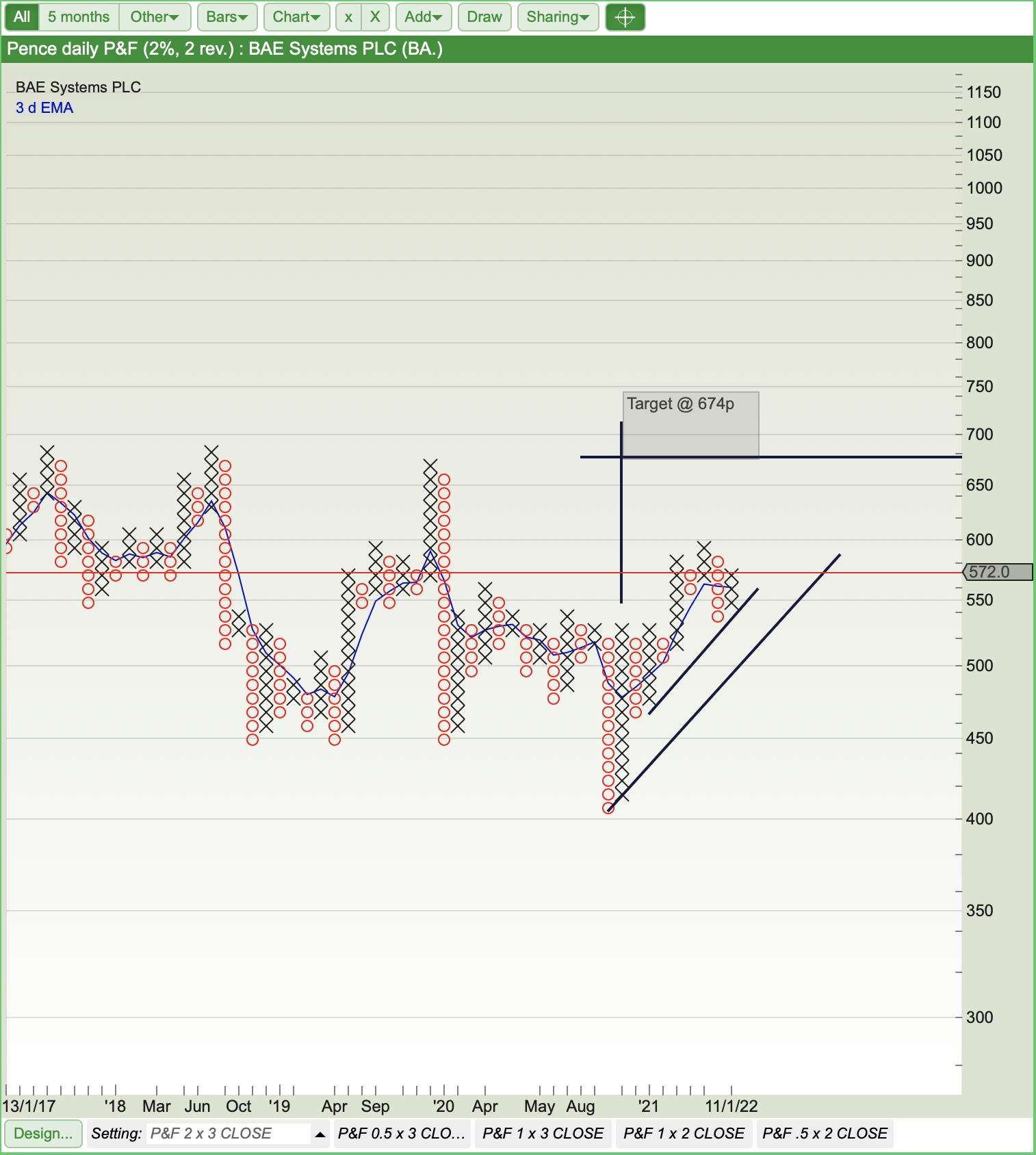 Both the 0.5% x 3 close and 1% x 3 close charts were bullish with an upward target of 650p on the 1% x 3 close. Fundamental forecasts were also still looking good, and fair value based on dividend discount was 523p. 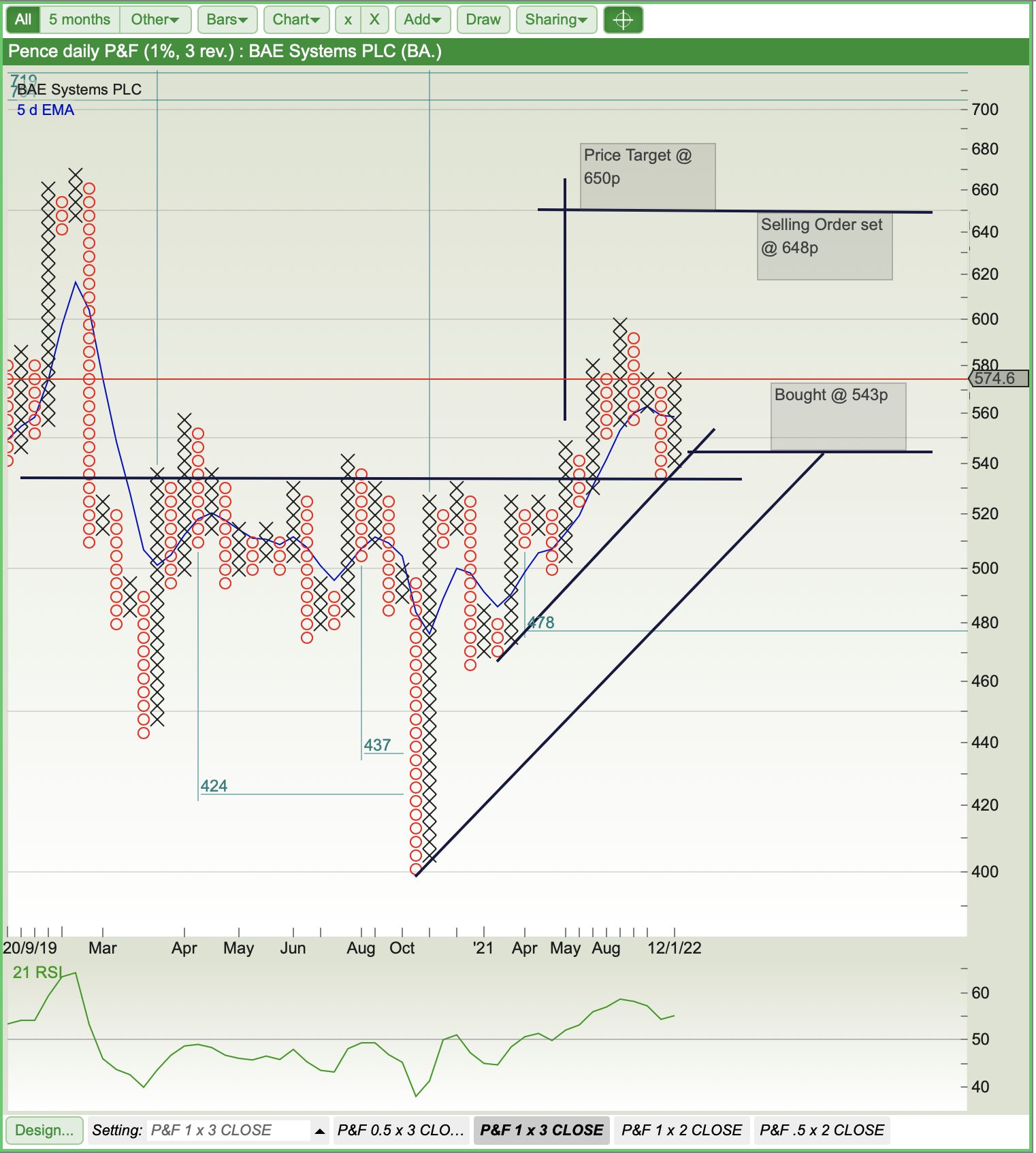 I bought at 543p once the share had started the next column of X’s off a strong support line. I have set my selling order at 648p. I will keep an eye on this and reassess as it gets closer to the target.

I used Drax as a bit of a test case to establish my rules for running with a trend. I bought Drax close to a support and downward price target on the 1% x 3 close chart. My initial aim was to sell at the 502p upward price target, but the price was driven up by the energy crisis. 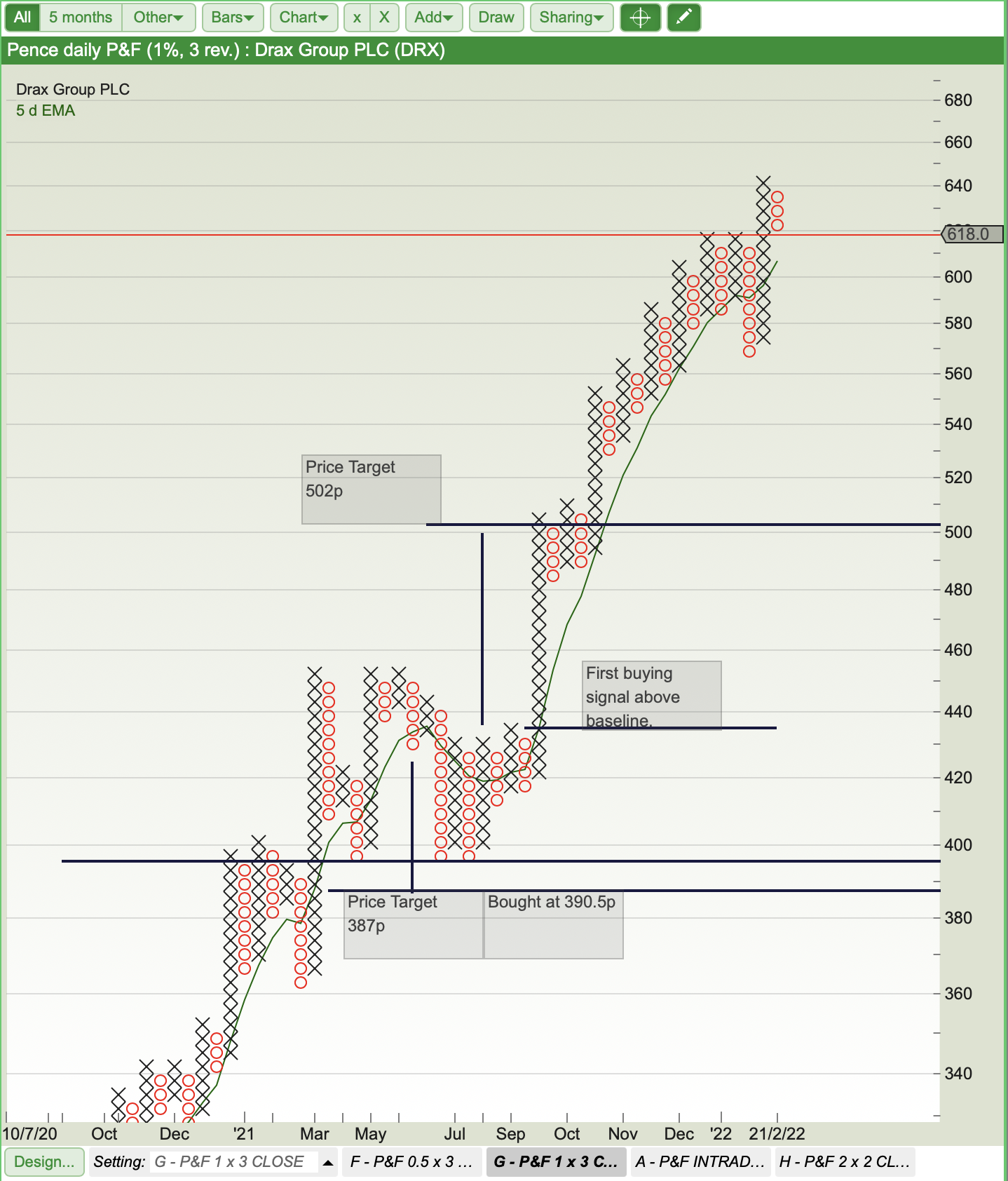 I added a 5 EMA to my 1% x 3 close chart to see if it could help me stay in with the trend before it signalled any weakness. It worked really well and I am still in this trade, but watching it closely.

I bought Barratts at 679p in November. I was aiming for a selling target price of 793p. It didn’t reach this target and dropped back in January. I sold out on the P&F selling signal from my 1% x 3 close chart at 696p. I didn’t feel confident about staying with this share in the same way I did with Drax given the cladding issue announcements.

I’m keeping an eye on Barratts with a view to repurchase once the 0.5% x 3 close shows a new buying pattern. 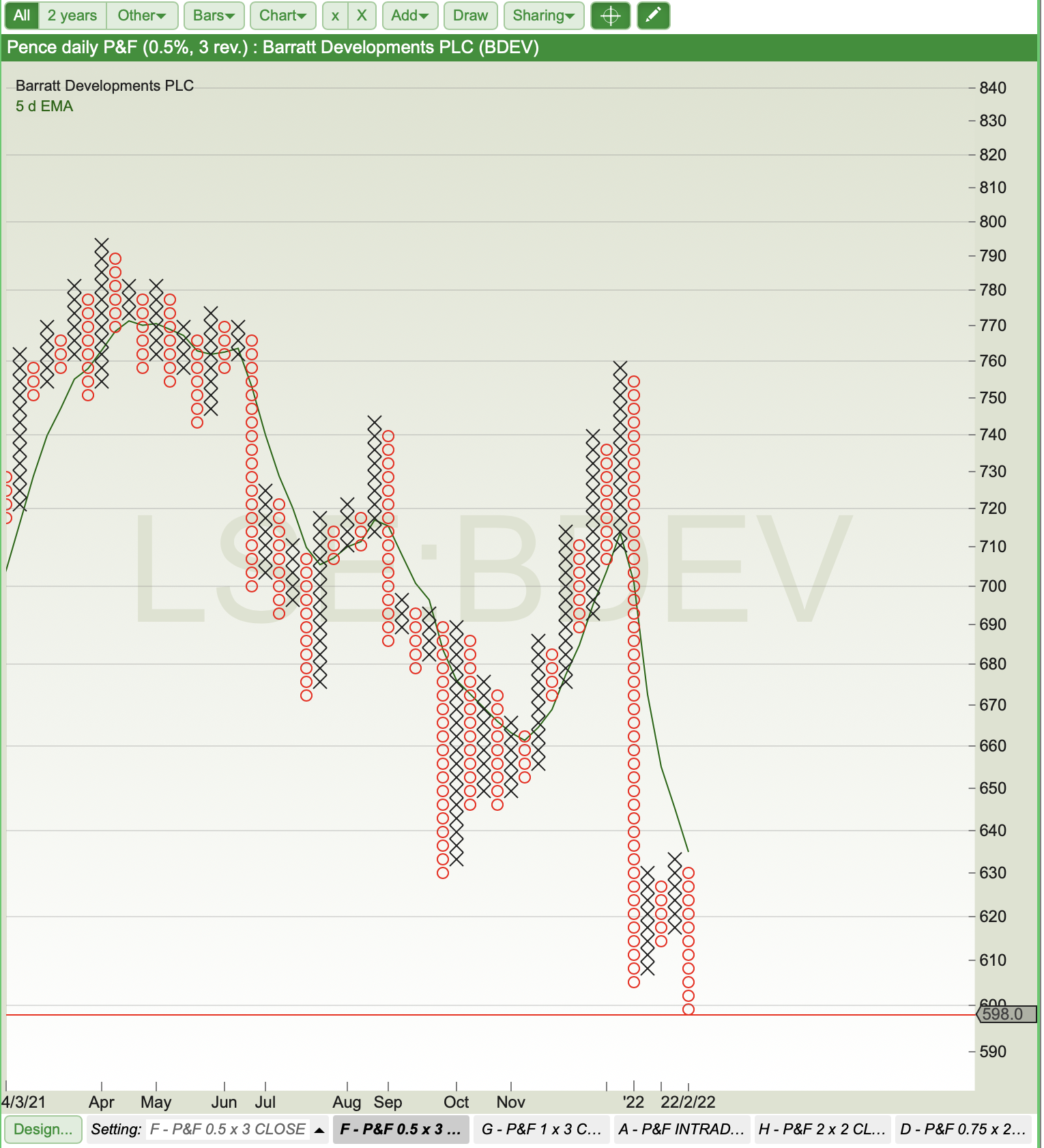 At the moment, with the current volatility in the markets, when looking to sell a share I am adopting Dr Elder’s analogy of “when the rabbit is big enough shoot it”. I am also working on basing some of my price targets on two box reversal charts. I will update you on this in my next blog and how it worked out.

Since recently adding a longer term 2% x 2 close chart into my analysis, it’s become easier to spot the bull/bear trend. As shares seem to spend most of their time trending in one direction or the other, if I buy a share that is bullish there seems to be a greater chance of that trend continuing – unless I am unlucky.

I need to remember that all I can control is when I buy and sell a share and how I interpret the psychology behind the creation of the point and figure charts. I have found learning about the Dow Theory really helpful.

Read William’s previous articles here and leave your top investing and trading tips for him in the comments section below.