Screening For My Next Long-Term Winner: Curtis Banks

Shares offering ‘Quality At a Reasonable Price’ have been hard to find during the last few years.

At present this small-cap offers:

I found Curtis Banks after using SharePad to shortlist companies where dividends had risen over the last five years yet their shares had not increased.

To narrow the field down further, I restricted the search to companies with net cash and a GBP-denominated share price. 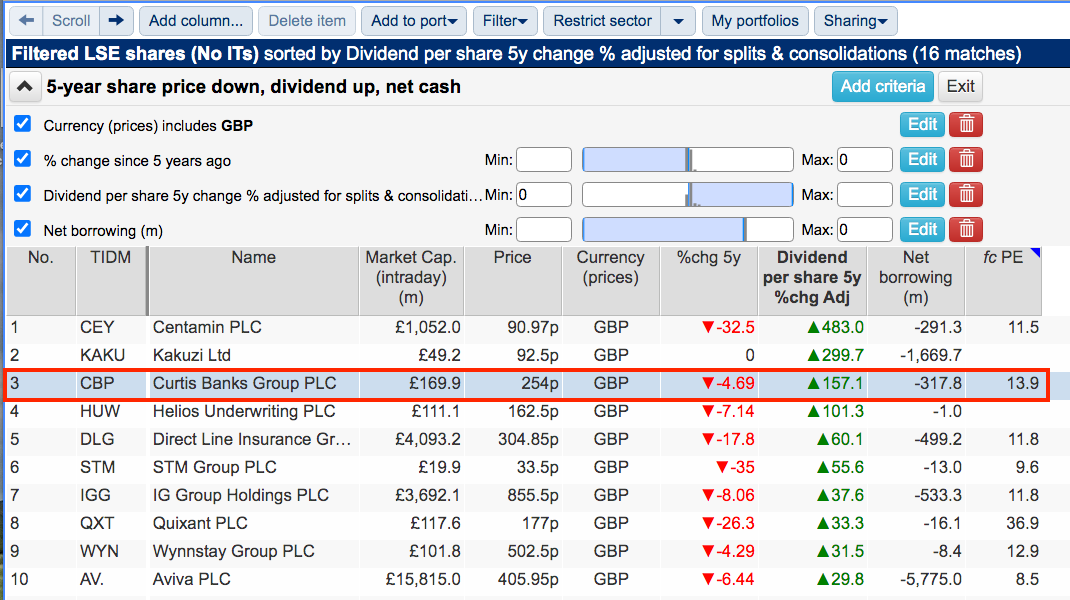 (You can run this screen for yourself by selecting the “Maynard Paton 22/09/21: Curtis Banks” filter within SharePad’s comprehensive Filter Library. My instructions show you how.)

I selected Curtis Banks as it was third on the list after an Egyptian gold miner and a Kenyan avocado farmer.

Sure enough, the group’s dividend has improved: 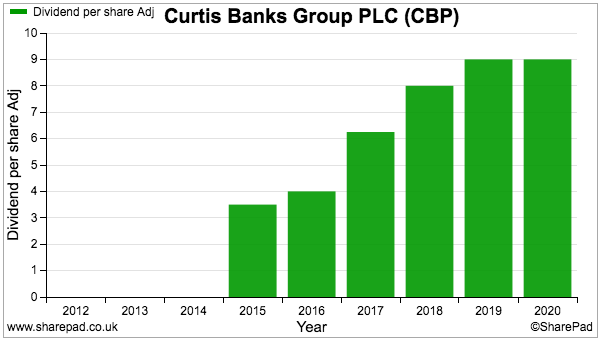 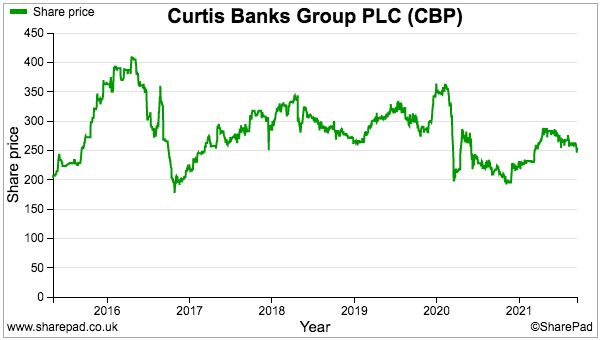 The history of Curtis Banks

Messrs Curtis and Banks believed the new rules would spark greater demand for SIPPs as well as increase the regulatory and administrative burden on smaller SIPP providers.

Curtis Banks acquired a number of those smaller providers and presently administers SIPPs for more than 80,000 investors. The vast majority of new accounts are generated via financial advisers handling pension transfers.

The company earns management fees, trading commissions and interest on cash balances from each SIPP holder, but does not give investment advice and does not take on direct investment risk.

As well as acquisitions, the number of SIPPs handled has expanded through organic growth offset by account transfers and closures (‘attrition’): 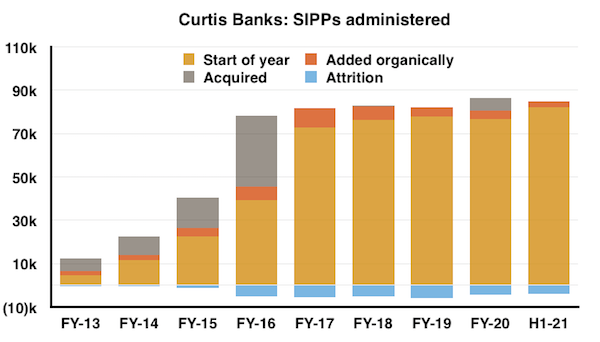 The £45 million purchase of Suffolk Life during 2016 was a transformative deal, bringing with it 28,000 SIPPs and £10 billion assets under administration.

Suffolk Life alongside other purchases have today established Curtis Banks as one of the country’s largest specialist SIPP providers with client assets of £36 billion.

Curtis Banks has exhibited respectable growth over time. The rising number of administered SIPPs has lifted both revenue and profit: 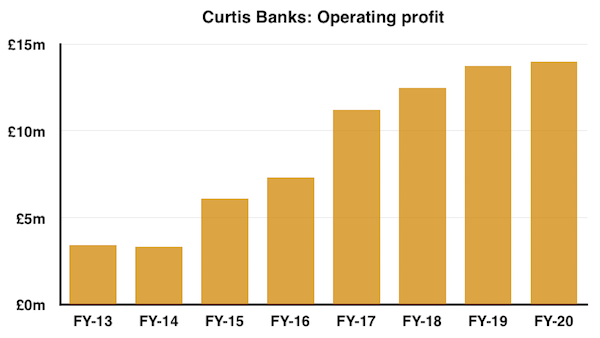 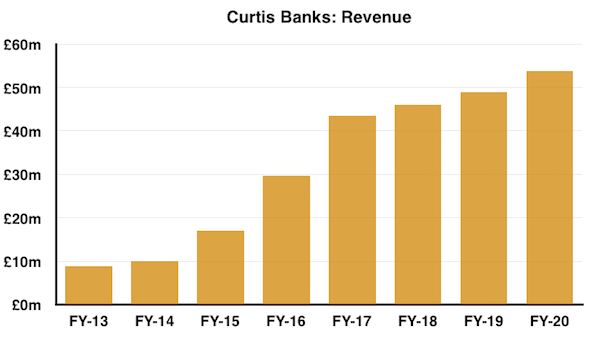 Mind you, the income earned from fees and interest per SIPP has kept steady around the £600-£650 mark (green line, right axis): 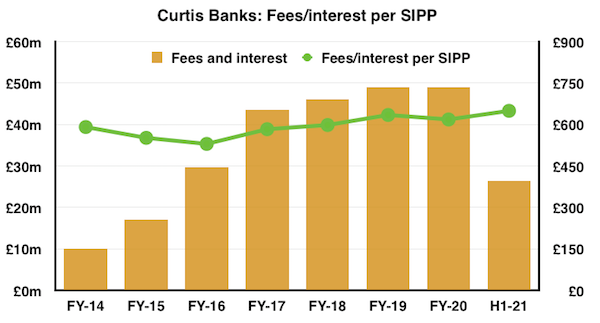 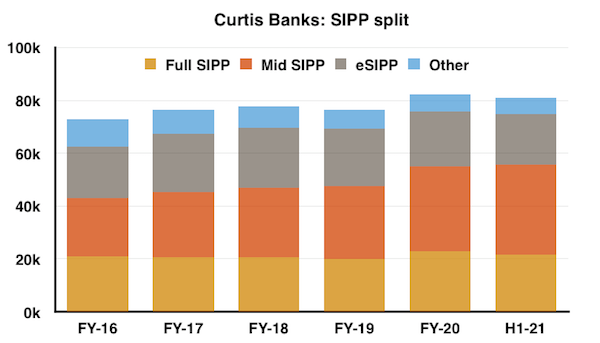 A mid SIPP earns Curtis Banks about £250 a year more than an eSIPP but £500 less than a full SIPP: 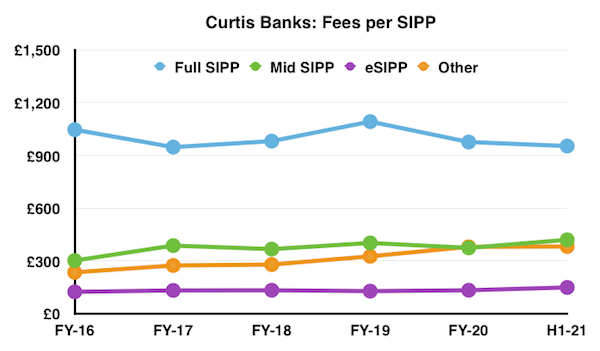 The company’s website provides this informative document that compares charges across the sector. Curtis Banks is unusual for employing a flat-fee structure and its mid SIPP apparently offers good value for accounts of £150,000 or more:

Careful observation of that earlier SIPP chart does show SIPPs added organically are less than the SIPPs lost through ‘attrition’: 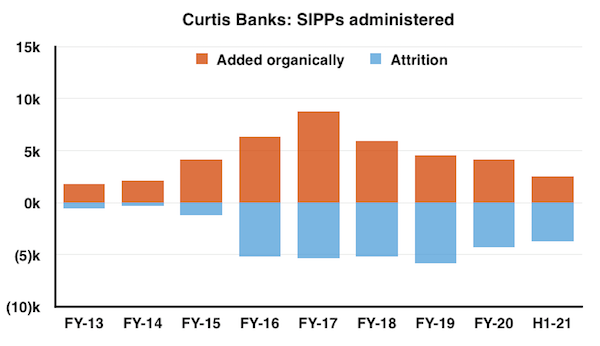 Curtis Banks has in fact experienced a net loss of 2,575 SIPPs since the start of 2019.

(Scuttlebutt note: I am aware of one financial writer who is very dissatisfied with Curtis Banks’ commissions and administration, and is trying desperately to transfer to another provider!)

Another awkward trend is revenue per assets under administration (AuA). Income generated from the value of all SIPPs has reduced from 0.21% to 0.15% of AuA since 2016 (green line, right axis): 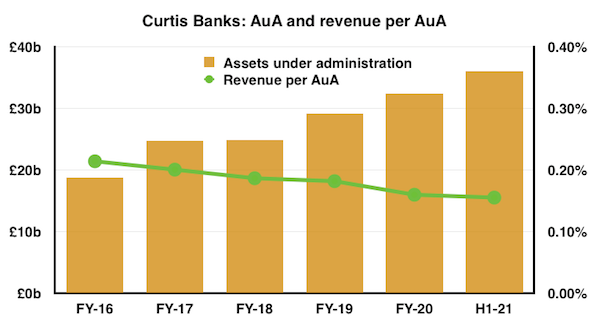 Curtis Banks’ recent progress is in contrast to the larger industry platforms.

I can only conclude the full and mid SIPPs that Curtis Banks favours have limited mass-market appeal, and today’s new investors are quite happy with standard SIPPs at the higher-profile providers.

Although Curtis Banks admits its organic expansion potential is relatively limited, the group has sought growth from two other sources.

First, diversification into ‘fintech’. During 2020 Curtis Banks paid £26 million for Dunstan Thomas, an IT system supplier to the group.

Curtis Banks claims this acquisition would lead the group’s “evolution from a solely focused SIPP and SSAS administrator to a provider of technology and complementary services for the advised retirement market, including FinTech, legal and property services.”

The second source of growth was a “proactive change to our SIPP fee model” — which translated means ‘higher charges’. 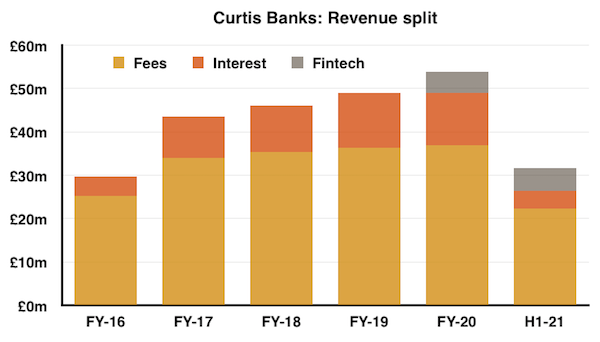 Curtis Banks claims “85% of core revenues are recurring in perpetuity”, which could translate into approximately 60% of total revenue.

Curtis Banks offers some respectable financials. Cash has exceeded borrowings since 2015 and at the last count the difference was £10 million: 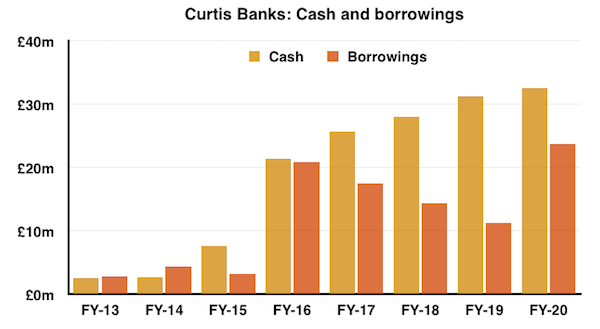 Note that the group’s regulatory capital requirement is £15 million, which arguably leaves no truly surplus money in the bank.

The aforementioned Suffolk Life and Dunstan Thomas purchases were funded by a mix of share issues and extra debt. 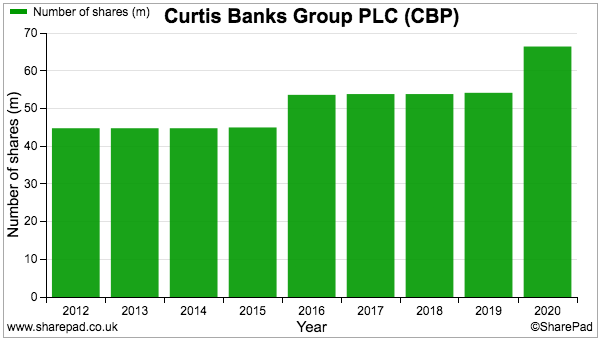 Curtis Banks’ margin and return on equity were relatively stable between 2016 and 2020: 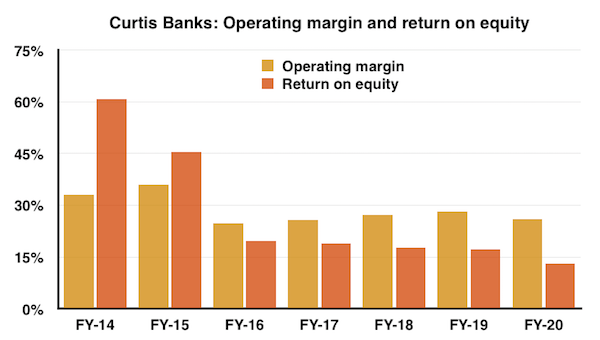 Curtis Banks has recorded ‘non-recurring’ expenses every year as a quoted company, and the £11 million total since 2016 represents a significant 18% of pre-non-recurring operating profit reported during the same period.

The group’s return on equity calculation ought to recover beyond 15% for 2021 as the company enjoys a full-year contribution from the Dunstan Thomas acquisition.

Co-founders Rupert Curtis and Christopher Banks no longer serve as directors but retain sizeable shareholdings worth an aggregate £45 million: 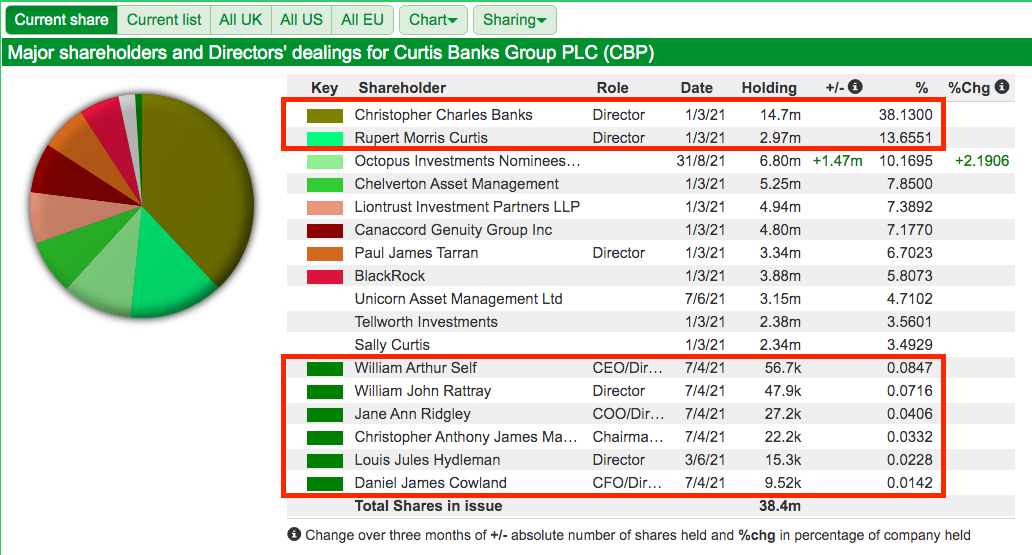 Present management unfortunately feels very much like a typical professional board. Irritating remuneration features include:

At least the chief executive knows the industry. He has worked in the sector for almost 20 years and led the acquired Suffolk Life before taking charge of Curtis Banks during 2019.

The board has commendably appointed some useful non-exec talent. In particular:

A welcome management KPI is SIPP per employee:

“We measure SIPP per operational FTE [full time equivalent] to measure the efficiency of our operations and also to provide reassurance around maintaining the desired levels of client servicing.”

Prior to the fintech deal each Curtis Banks employee served 134 customers with total investment assets of £51 million, which does not seem as productive as those working at the major SIPP platforms.

Indeed, each employee at Hargreaves Lansdown serves 895 customers with total investment assets of £74 million while each AJ Bell employee handles 365 customers and assets of £70 million.

Employee wages meanwhile absorb almost 40% of revenue at Curtis Banks, versus 16% at Hargreaves Lansdown and 26% at AJ Bell.

Employing staff who serve fewer customers and receive a greater share of revenue suggest Curtis Banks does not enjoy the favourable workforce/business economics of the larger industry alternatives.

Should you buy Curtis Banks?

First-half results issued earlier this month were not spectacular.

Underlying revenue fell 4% to £23.6 million and adjusted operating profit dived 30% to £4.5 million after the aforementioned fee hike was offset by much lower interest income:

The mixed performance meant the group’s adjusted margin fell from 26% to 21% although management did reiterate its (rather bold) 30% margin target. A timeline was not specified, but I note new IT systems are scheduled for 2024 and are predicated to save £1.2 million a year.

The single-digit growth forecasts for 2022 and 2023 meanwhile reflect the modest underlying progress reported during the last year or two.

But the modest growth forecasts are reflected by a not-so-outrageous valuation.

The 254p shares could trade at 14x or 17x earnings depending on whether you apply my 15.4p per share calculation or SharePad’s 18.3p per share consensus. Go for the SharePad’s 2023 forecast and the P/E drops to 12.

All of those ratings are much lower than those of Hargreaves Lansdown and AJ Bell but those larger SIPP platforms do have more appealing economics and are attracting greater numbers of new accounts than Curtis Banks. 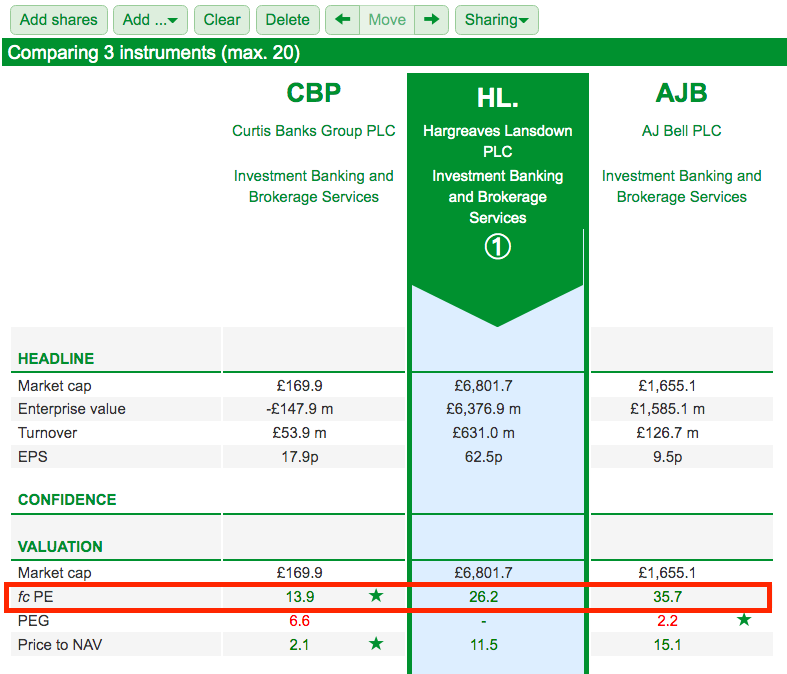 Still, the shares of Hargreaves Lansdown and AJ Bell have also traded sideways for the last few years which just goes to show paying high multiples for better prospects does not always lead to investment success. 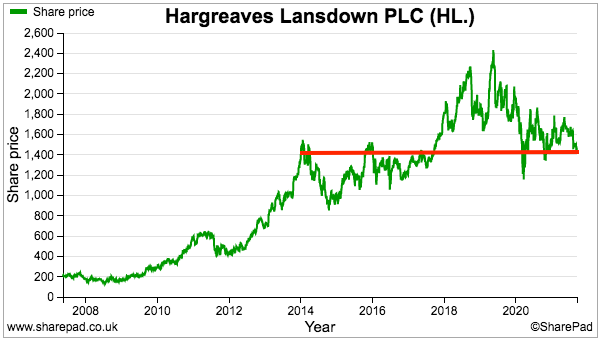 For now at least, Curtis Banks’ QARP credentials would be enhanced if the group could attract more customers, reduce account ‘attrition’ and/or offer some promising ‘fintech’ progress.

Mind you, I do not think future growth has to be superb for the shares to stand a fair chance of outperforming the higher-rated Hargreaves Lansdown and AJ Bell.

Maynard writes about his portfolio at maynardpaton.com and hosts an investment discussion forum at quidisq.com. He does not own shares in Curtis Banks.

4 comments on Screening For My Next Long-Term Winner: Curtis Banks