Should you buy SDI shares? | Screening For My Next Long-Term Winner

Posted on 8th September 2021 | By Maynard Paton | No comments

Acquiring private companies that make precision instruments has propelled SDI shares to 12-bagger status over the last five years. Maynard Paton recaps the story and prospects of the ‘buy and build’ specialist.

SharePad lists 168 names that have delivered 15% or more annualised turns during the last one, three and five years: 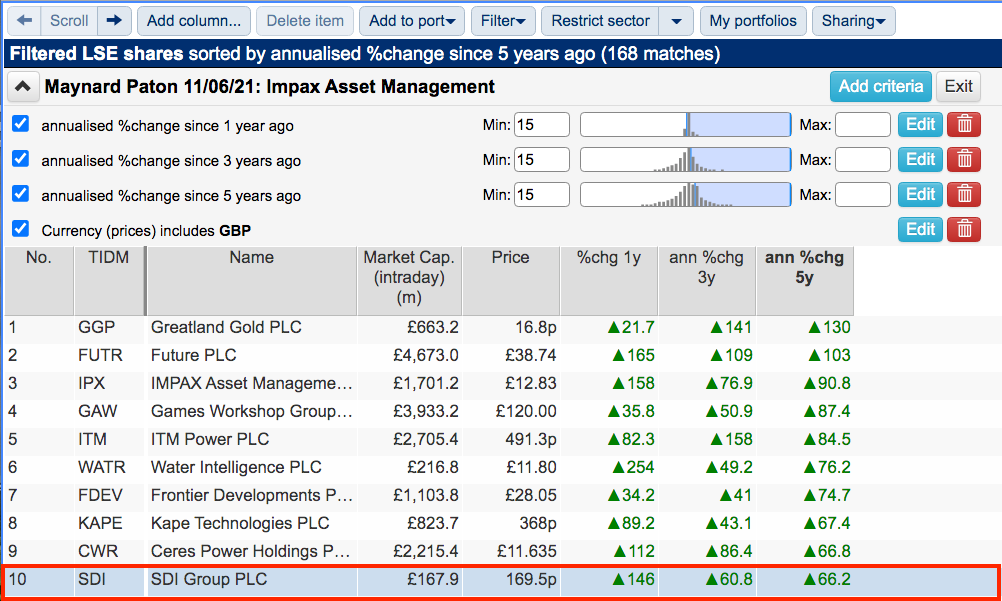 (You can run this screen for yourself by selecting the “Maynard Paton 11/06/21: Impax Asset Management” filter within SharePad’s incredible Filter Library. My instructions show you how.)

SDI Group is ranked tenth of the 168 and its shares have certainly kept going up. They have surged 146% during the last twelve months and 12-bagged since 2016: 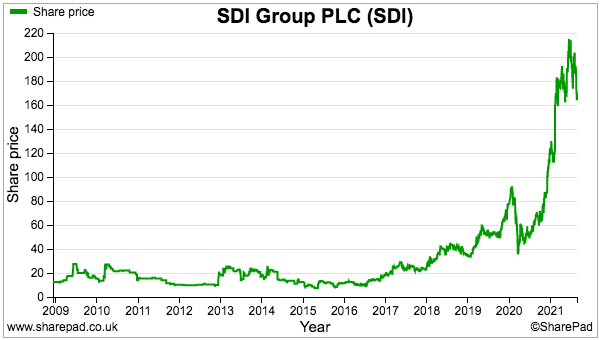 The history of SDI

SDI’s present operations date back to 1984 when research fellows at Cambridge University began to commercialise their work on image processing. Early products included components for laser-scanning microscopes and systems for gel electrophoresis used for DNA analysis.

One of the researchers, Dr Philip Atkin, established Scientific Digital Imaging during 2007 to purchase his former company and then acquire other small developers of special-purpose instruments.

The acquisition of a high-performance camera manufacturer occurred during 2008, as did SDI’s AIM flotation to accelerate the ‘buy and build’ strategy.

But a reorganisation took place during 2012 and the acquisitions recommenced in 2014, starting with a company that made infrared cameras used to authenticate old paintings. 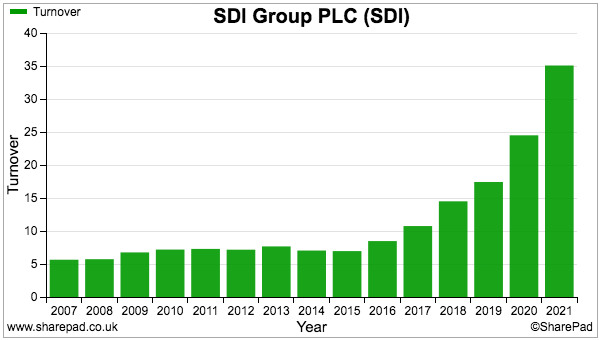 … and lift the business away from operating close to break-even: 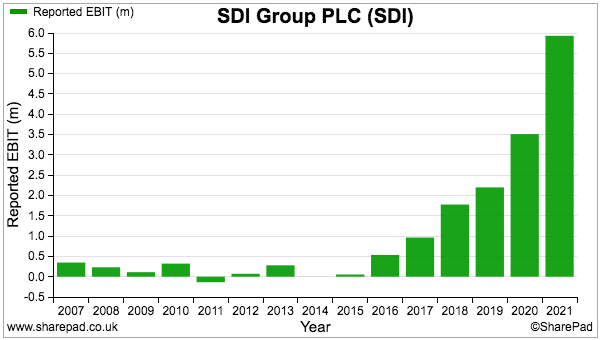 Eleven further businesses have since been acquired with products including:

SDI’s SharePad summary is shown below: 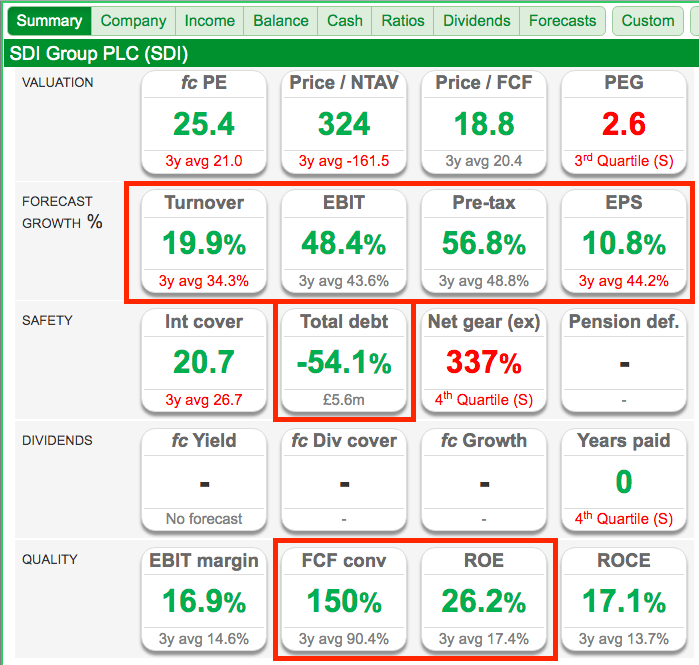 The main points of interest are:

Let’s start with the ROE numbers.

SDI’s growing profit has led to a favourable ROE trend: 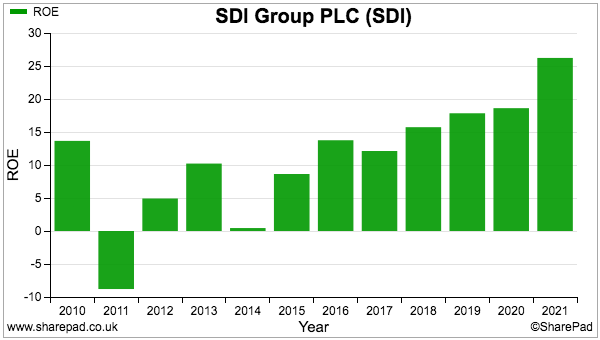 The amortisation of purchased intangibles and any shares issued direct to the vendors in particular can cause calculation complications.

My spreadsheet below lists 12 of SDI’s 13 acquisitions since 2014 (the 13th was a negligible operation that was subsequently sold): 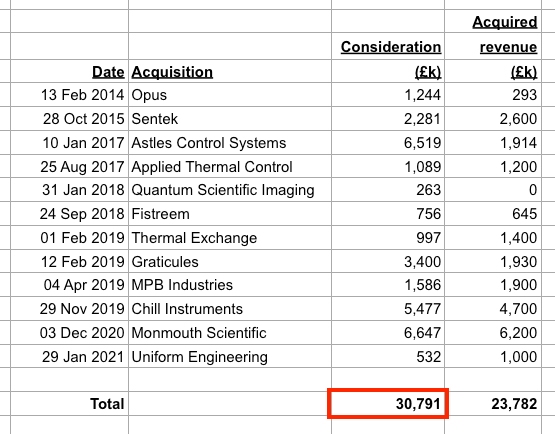 The aggregate consideration for the 12 deals at the time of purchase was £31 million.

In return, SDI’s earnings have gone from close to zero to a company-adjusted £6.1 million:

(This 19% calculation reduces to 18% if you add the total £2 million SDI has expensed as ‘exceptional’ reorganisation and acquisition costs to the £31 million denominator.)

…which, after tax, equates to acquiring 16% earnings yields. SDI’s ROE returns are enhanced further by employing debt with interest costs at approximately 3%.

Total borrowings went from less than £1 million to more than £9 million between 2015 and 2020 to help fund the purchases, although SDI wisely used its acquired cash flows to reduce debt to £3 million during 2021:

At the last count, bank debt of £3 million was covered entirely by cash in the bank of almost £4 million.

The rate of organic growth should always be monitored at companies with ‘buy and build’ strategies. Acquisitions can of course easily mask trading problems at the other subsidiaries.

My spreadsheet below lists the revenue generated by those 12 acquisitions during the year prior to purchase: 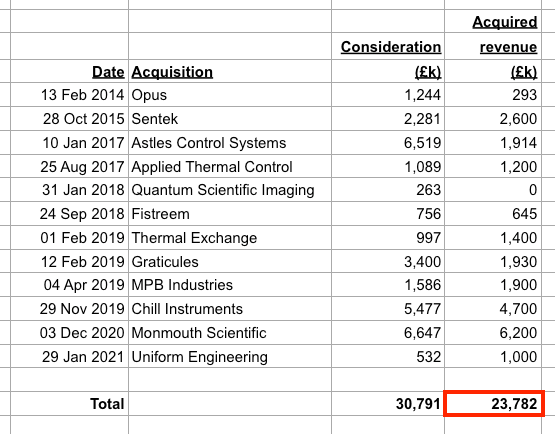 Acquired revenue since 2014 totals nearly £24 million, which when added to actual 2014 revenue of £7 million gives £31 million. Assuming all of the purchases have worked out, SDI should have recorded revenue in excess of £31 million for 2021…

…and revenue for 2021 was in fact £35 million. Indeed, revenue would have been close to £40 million if the recent purchase of Monmouth Scientific had been owned for the full twelve months:

The £35 million and £40 million calculations underpin SDI’s claim of enjoying organic sales growth, although the main subsidiary at the time of the flotation appears to have faltered over time.

…but then said Synoptics generated revenue of £4.9 million for 2018: 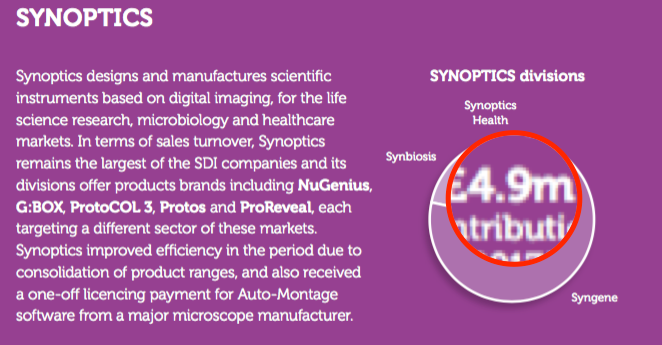 I note SDI no longer mentions Synoptics’ revenue and no longer files the full accounts of the subsidiary at Companies House.

Returning to that 19% organic growth-rate figure for 2021, be aware this number was supported entirely by “one-off Covid-19-related contracts“:

Although this one-off Covid-19 revenue will at some point disappear, SDI’s top line should be assisted by growth reappearing at the subsidiaries that were hit by the pandemic.

The pandemic-related contracts will continue during 2022 and underpinned that 150% free cash conversion for 2021: 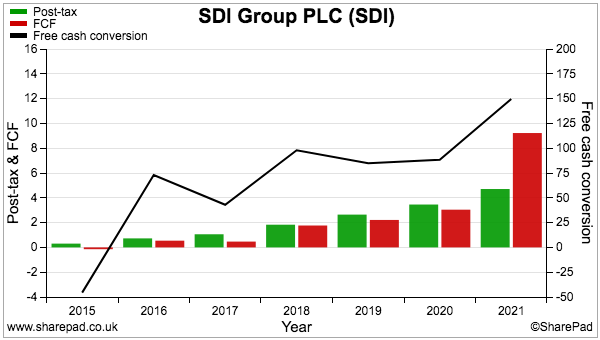 … and the annual report confirms ‘deferred revenue’ (representing upfront customer payments for orders yet to be delivered) increased by £4 million due to the Covid-19 work:

SDI’s deferred revenue supports the group’s prospects for the current year, but is likely to reduce thereafter. Typical levels of deferred revenue equate to just 1% of revenue, not the 11% for 2021.

The earlier chart shows free cash conversion improving to respectable levels ­­­­­from 2018, although stock carried on the balance sheet has increased as a proportion of revenue (red line below): 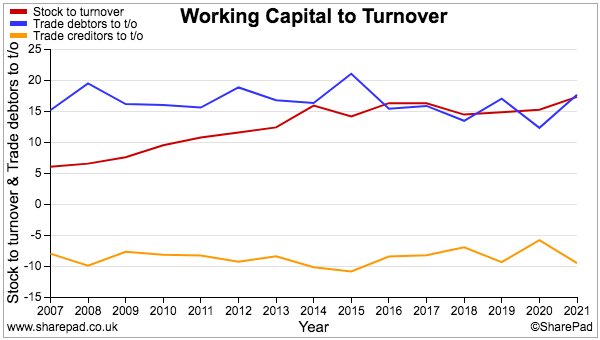 Greater stock levels could mean SDI’s product mix has shifted towards more expensive, slower-selling instruments. I note, too, that revenue per employee appears quite average at approximately £130,000 and had been on a declining trend until last year: 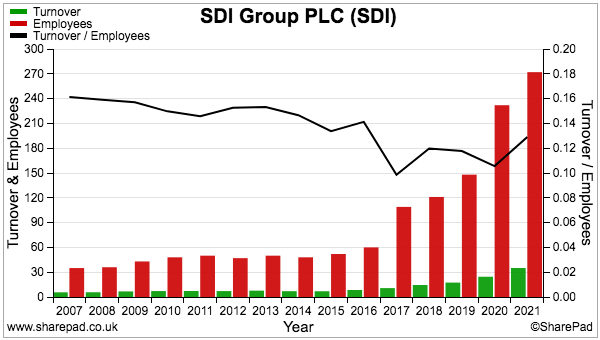 SDI now employs eleven times as many ‘Production’ employees as it did before the acquisitions recommenced during 2014. The number of ‘Product development’ employees in contrast has increased only four times.

I should point out that SDI’s £31 million acquisition spend has been part-funded by equity placings and the share count has more than quintupled since the float: 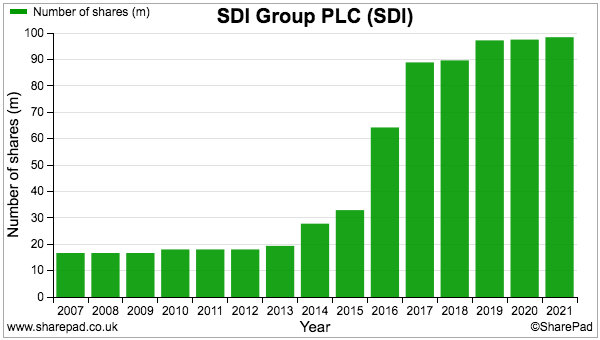 SDI founder Dr Atkin departed during 2011 and the present management can take credit for the group’s subsequent recovery and outperformance.

Mike Creedon is the man in charge. He joined SDI as finance director during 2010 and, for six years, rather amazingly fulfilled the roles of both chief executive and finance director.

Mr Creedon has been assisted by an executive chairman since 2012 and a new finance director since 2018.

Note that the directors possess no scientific-instrumentation expertise. The chief executive, finance director and a non-exec are all accountants, while the chairman is a former stockbroker and the other non-exec used to be a lawyer. The board is very much a deal-orientated team and presumably leaves all the technical product discussions to the employees.

The executives seem very fairly paid given SDI’s surging market cap, though the two non-execs have awarded themselves options:

Non-execs receiving options is typically viewed as a corporate-governance no-no. The annual report describes the non-exec options as “not significant“:

“Although both non-executive directors were recipients of non- tax advantaged share options in 2017 that was part of a one-off event on joining the Board and is not intended to be repeated in the future. The individual amount of those awards was not significant and the Board takes the view that this does not compromise the independence of the directors.“

Recent share sales have left the board with a relatively modest 1.5%/£2.5m shareholding…

…and each director presently owns more options than ordinary shares.

Should you buy SDI?

A trading statement during May made life simple for predicting 2022:

The concern is 2023, for which City brokers are predicting steep profit declines as the one-off pandemic work subsides:

However, nobody can predict what (if anything) SDI will acquire during the next year or two. SDI claimed during July that “one or two new companies” could be purchased by April 2022, and such purchases could turn those 2023 estimates very stale very quickly.

SDI’s shares meanwhile trade at approximately 34x the 2023 EPS projection — a premium rating that reflects the market’s optimism about SDI perhaps investing another £31 million to lift adjusted earnings by another £6 million.

What’s more, the group’s greater cash flow and higher share price could mean a reduced dependence on borrowings and a lower rate of future dilution.

All told, SDI’s acquisitions and financials appear in order while the board’s capital-allocation decisions to date can’t really be faulted. But obvious ‘buy and build’ dangers remain. Management may in future:

I would also highlight SDI’s 12-bagger return over the last five years has been driven in part by a significant P/E re-rating. 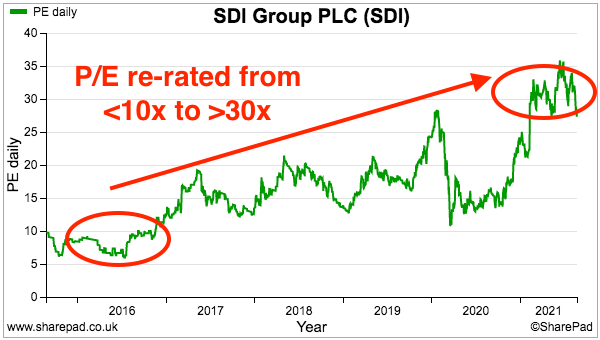 … and regardless of management’s deal-making skills, a similar-sized re-rating from today’s 34x feels extremely unlikely for the next five years.

Maynard writes about his portfolio at maynardpaton.com and hosts an investment discussion forum at quidisq.com. He does not own shares in SDI Group.

Have you tried “Maynard Paton 11/06/21: Impax Asset Management” filter? What screeners do you use to find long term investments? We’d love to hear from you in the comments section below