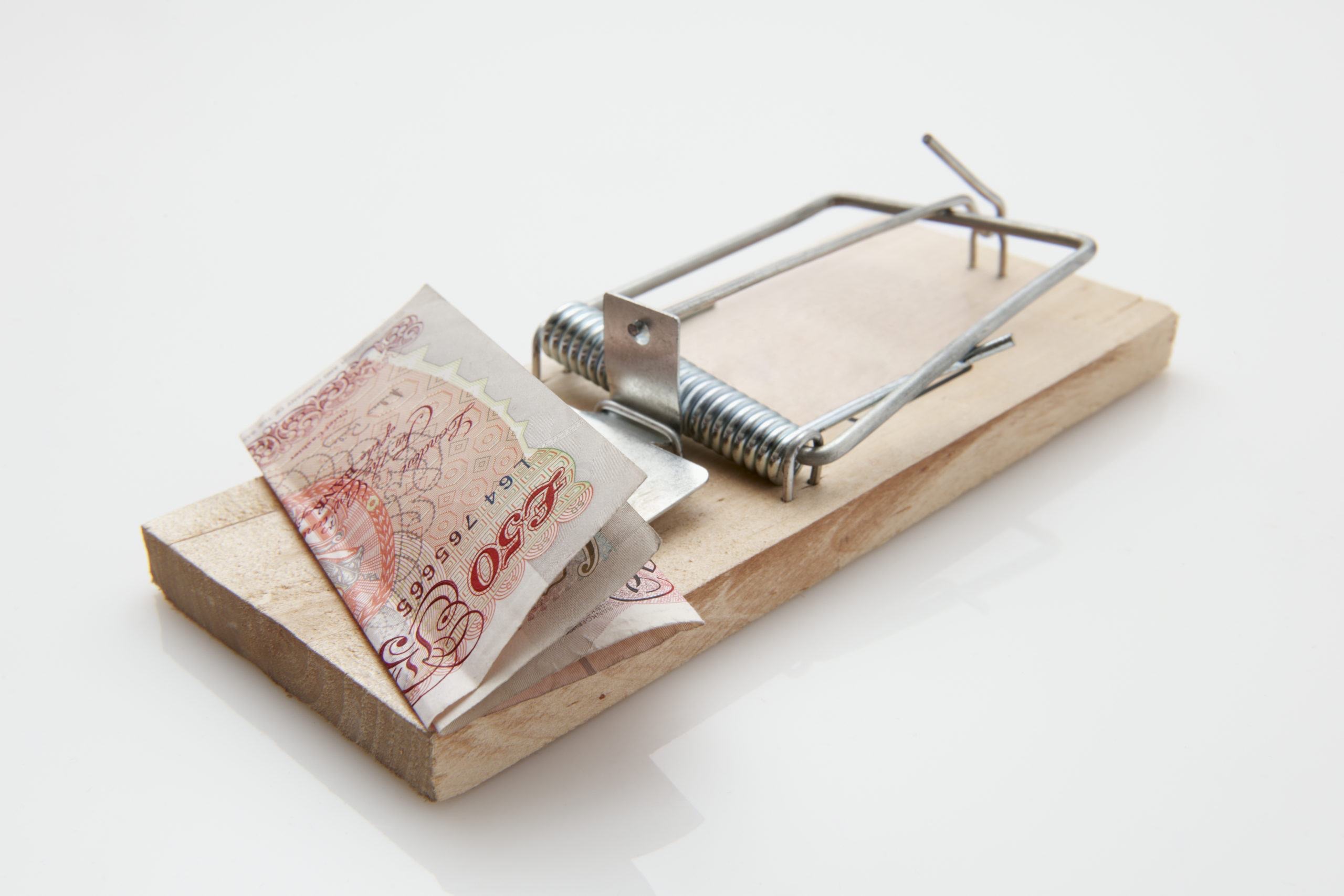 Let me start by confessing this article covers pension deficits.

What follows may not be that thrilling and does require you to concentrate. But please stick with me, especially if you have ever fallen victim to a ‘value trap’.

A burdensome pension scheme is a common reason why companies trade on permanently low ratings. The market essentially believes too much of their future profits will have to plug a retirement ‘black hole’ instead of being paid out as dividends.

A good example is Norcros, a £214 million manufacturer of bathroom showers, taps and tiles. 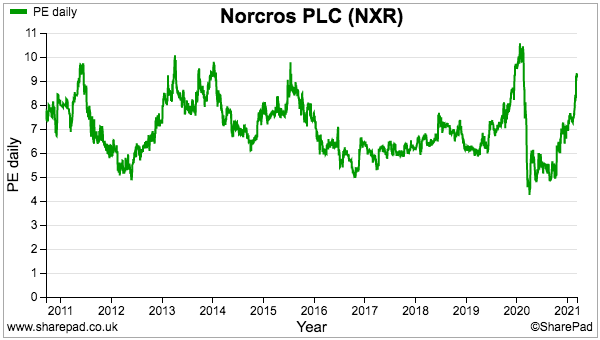 … and studying the group’s pension situation goes some way to explain why.

Pension deficits arise only at companies that maintain ‘defined-benefit’ or ‘final-salary’ schemes — that is, schemes that have promised the employee a certain level of pension benefits on retirement.

The Balance tab within SharePad tells us whether a company carries such obligations: 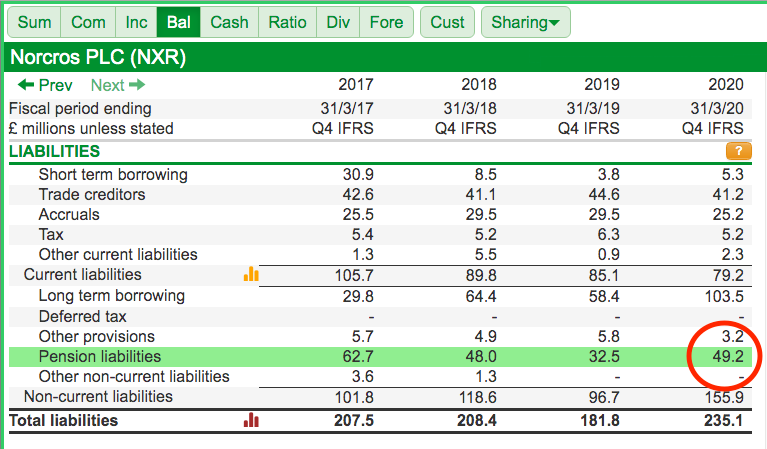 SharePad shows Norcros carrying a pension deficit of £49.2 million, and the group’s balance sheet within the annual report reveals how that £49.2 million was derived:

(Note: The ‘Other non-current liabilities’ are in fact overseas “post-retirement healthcare liabilities”, which are added to the £48.9 million pension liability to give the £49.2 million displayed within SharePad)

The annual report also shows the pension scheme having assets of £362 million and liabilities of £411 million to arrive at the £49 million deficit:

In theory at least, the £49 million deficit means the scheme requires extra assets totalling £49 million to ensure all the (expected) payments to the pensioners are met.

I say “in theory” because the scheme’s liability figure is calculated by actuaries using educated guesswork.

Predictions about longevity, inflation, salary increases and a lot more besides are fed into a spreadsheet…

…and tweaks to the data can make the liability calculation fluctuate significantly. Such fluctuations can then leave investors very confused as to how serious the deficit really is.

Case in point: SharePad shows the pension deficit at Norcros being anywhere between £5 million and £60 million during the last decade: 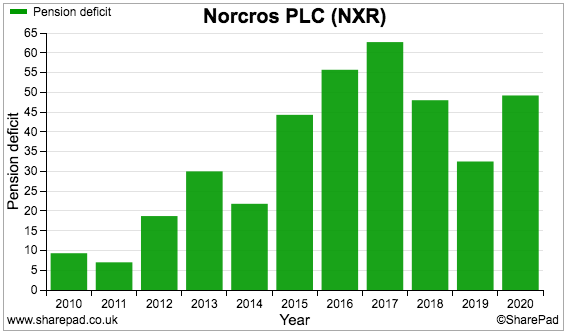 A better way to identify a problematic pension is to focus on the scheme’s assets.

Scheme assets are valued in the here and now, and therefore no real guesswork is involved. The assets within the Norcros scheme are invested within various classes:

Scheme assets should be studied because they generate the returns that pay the pension benefits to the scheme’s members.

If the assets are not generating a suitable return — and worse, having their value eroded as well — then the scheme could require extra funding to ensure the scheme members are paid what they are due.

Such extra funding will be effectively shouldered by shareholders, as cash that could have been reinvested into the business or distributed as dividends is instead absorbed by the scheme.

The possibility of cash being redirected into a pension scheme then explains the ‘value trap’ P/E — the market struggles to believe future earnings will flow entirely to shareholders.

Back to the Norcros annual report. This note explains how the scheme’s assets changed during the year:

…which all left the assets sporting a £362 million valuation at the year end.

The asset movements for the last five years are summarised below:

The totals tell the story.

The Norcros scheme has generated income of £55 million and received contributions of £13 million. Yet pension benefits paid out were £121 million.

Factor in the admin costs and the small portfolio movements, and scheme assets fell by £35 million (from £397 million to £362 million) during the five years. Lower assets are not ideal for generating reliable future returns for pensioners!

But are these movements a worry? We need to consider other companies to put the Norcros scheme into perspective.

BT has in the past been a byword for pension liabilities. The other year the telecom group’s scheme exhibited a £9 billion deficit: 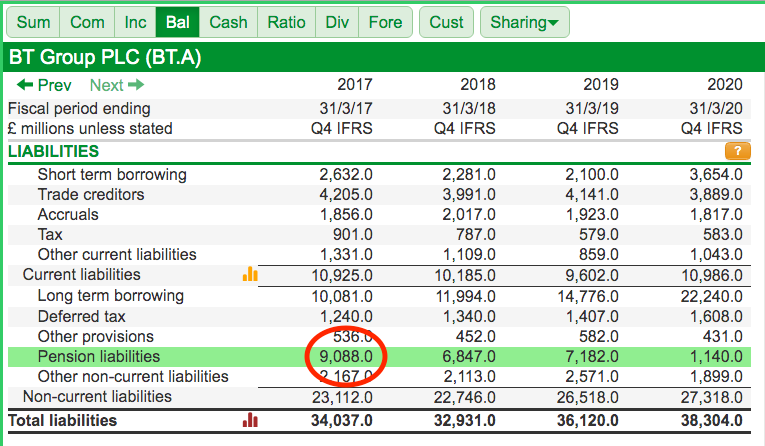 Sizeable contributions have helped BT plug the gap. I have summarised the asset movements within BT’s scheme below:

The summary shows BT managing its scheme very differently to how Norcros manages its scheme.

In particular, within the BT scheme, total income of £6.6 billion plus contributions of £6.4 billion exceeded the total £12.4 billion paid out as benefits.

The equilibrium between inflows and outflows therefore allowed BT’s scheme to retain all of the portfolio’s gains and so increase assets by almost £10 billion (from £43.6 billion to £53.5 billion).

In contrast, Norcros had not contributed enough to cover its scheme’s outflows — which is why its scheme assets are lower than five years ago.

With BT contributing enough to cover the pension outflows, assets within BT’s scheme have advanced substantially and placed the fund on a stronger footing — just in case the investment income drops or pension benefits rise dramatically.

BT’s management of its pension scheme may of course not be representative of other companies. Let’s therefore consider a few more blue chips to provide further perspective.

Pension deficits at other blue chips

I have studied the pension schemes of nine other FTSE 100 shares and summarised my five-year findings below: 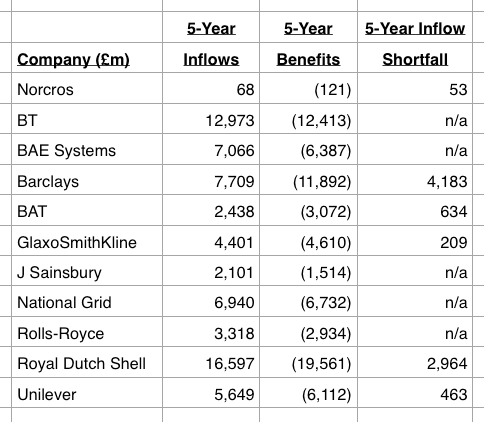 A few points to consider:

This survey does not look great for the Norcros scheme…

…and becomes even worse when we consider inflow shortfalls are likely to be plugged by extra contributions rather than through greater investment income. 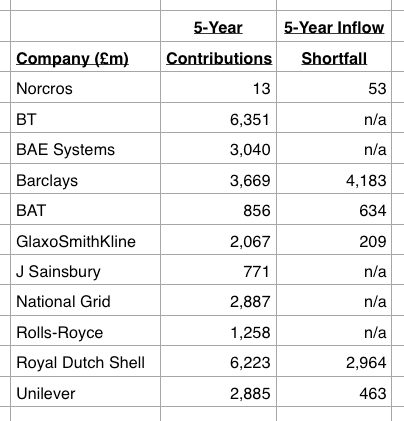 Contributions by Norcros would have had to have quintupled, from £13 million to £66 million, to have covered the £53 million shortfall and ensure the scheme inflows matched the benefits paid out.

Exclude Barclays due to its one-off benefit payment and BAT is next up with a 74%, or £634 million, extra contribution requirement.

Payments until 2070 and beyond

Maybe Norcros has an unusual pension situation. After all, the PowerPoint accompanying the group’s 2020 results describes the scheme as “super-mature”: 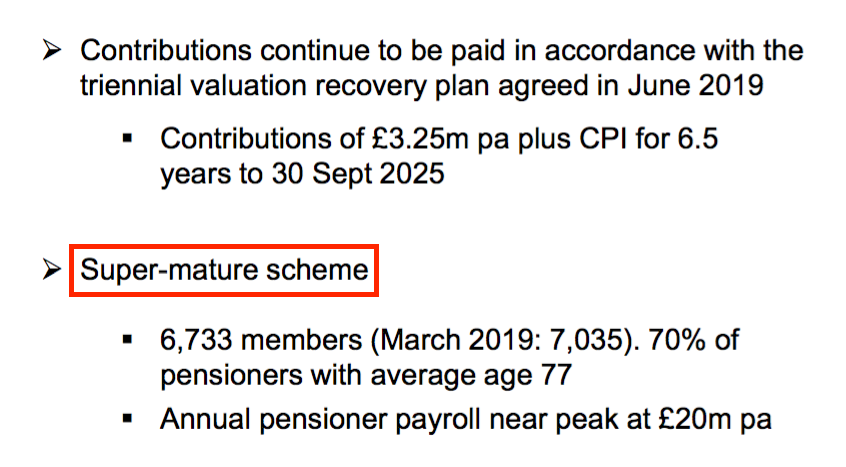 Perhaps this ‘super maturity’ means contributions do not have to be that great because the liabilities will soon disappear.

But tucked away in an appendix within the same presentation is this sobering chart:

Pension benefits at Norcros are expected to remain close to their present level until 2032/33 before gradually reducing towards zero. The scheme will actually pay benefits until beyond 2070.

(If this Norcros scheme is indeed “super-mature”, just how long will an immature pension scheme continue paying benefits?)

BT’s pension benefits are projected to remain close to their current level until 2032/33 before reducing thereafter. The scheme seems set to pay benefits until 2080.

Suffice to say, if the schemes at Norcros and BT have similar payout profiles and timescales…

…arguably the relative funding of both schemes ought to be similar, too.

What could all this mean for Norcros?

I would argue the company’s pension contributions ought to have been a lot higher than they were.

To have matched the benefits paid during the last five years — and therefore put the company on a similar pension footing to BT, BAE, Sainsbury’s, National Grid and Rolls-Royce — Norcros ought to have injected an extra £53 million into its scheme.

But contributing an extra £53 million over those five years would have reduced total free cash flow of £79 million by 67%:

And remember, the extra contributions may well be needed every year for some time…

…which goes a long way to explain why the Norcros share price has persistently languished on that single-digit rating.

…but also says the next funding assessment occurs this year:

“Pension scheme valuations are undertaken on a triennial basis and the next one is due to take place in 2021. The current deficit recovery contributions could be adjusted following that valuation.”

Whether the review leads to radical funding changes remains to be seen.

In the meantime, Norcros’ present pension contributions appear far from sufficient when compared to the schemes operated by many blue chips…

…and the shares therefore may not escape the ‘value trap’ rating for a while yet.

Maynard writes about his portfolio at maynardpaton.com and hosts an investment discussion forum at quidisq.com. He does not own shares in Norcros or in any of the other companies mentioned.