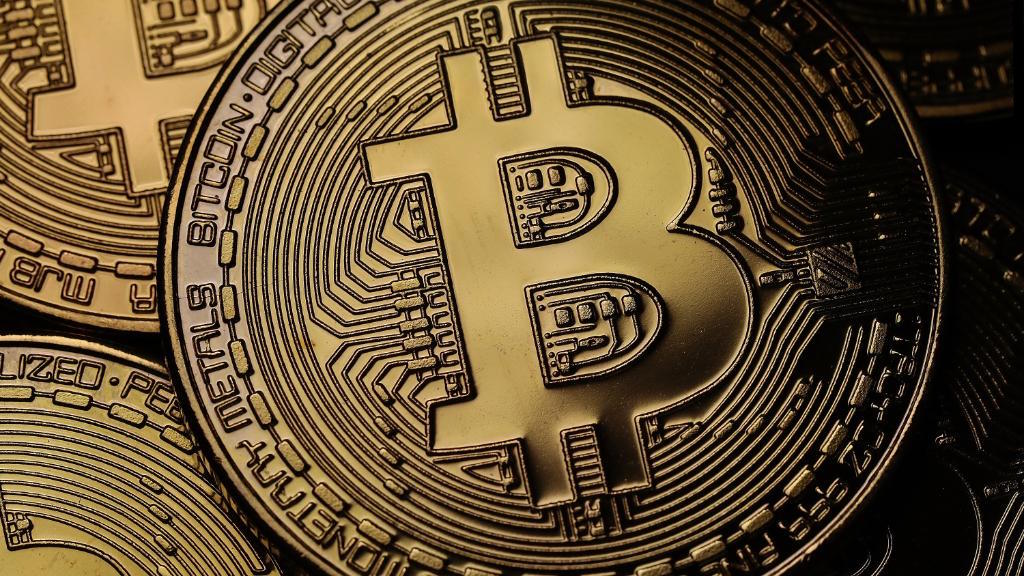 Let’s start with a wealth warning:

The upshot is my logic and calculations may be completely wrong or out-of-date by the time you read what follows.

Still, Argo is a company worth studying. The shares have soared 25-fold in just two months… 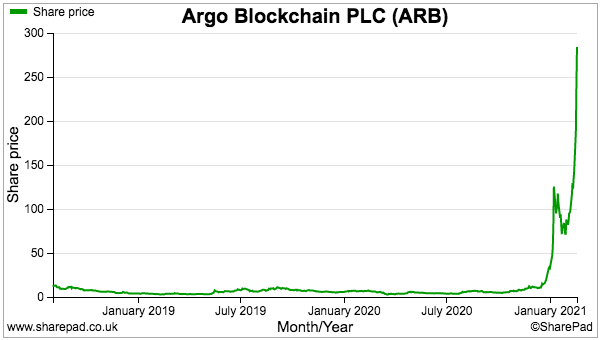 …and the price action has naturally caught the attention of SharePad subscribers: 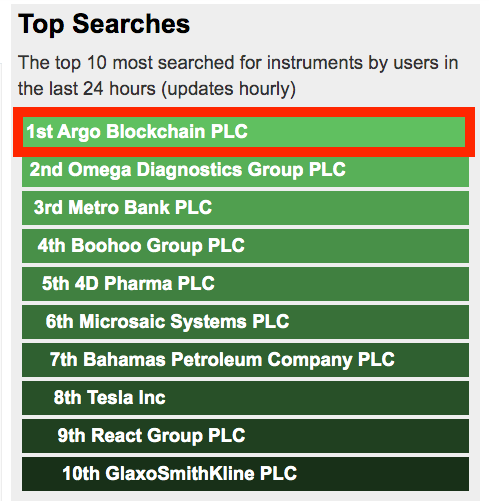 Headlines such as these may have helped fuel the buying spree:

Let’s find out what is happening at Argo.

I will not confuse you with a comprehensive explanation of bitcoin mining.

All you need to know is companies such as Argo have thousands of computers performing billions of calculations in the hope of receiving bitcoins for verifying transactions within the bitcoin network.

A statement the other week from Argo outlined eye-catching progress:

Based on daily foreign exchange rates and cryptocurrency prices during the month, mining revenue in January amounted to £2.48 million (December 2020: £1.63 million). Argo generated this income at an average monthly mining margin of approximately 71% for the month of January (December 2020: 60%).

At the end of January, the company held 501 BTC in Bitcoin and BTC equivalents. In the second half of January, the Company purchased a total of 172.5 BTC as part of its asset management strategy. Argo’s total mining capacity is currently 787 petahash (SHA-256) in addition to 280 Megasols of equihash mining capacity.”

Argo has issued monthly updates since January 2020, when the business began mining bitcoin for itself rather than on behalf of customers. My charts below show Argo’s progress.

Revenue during January was indeed much higher than usual… 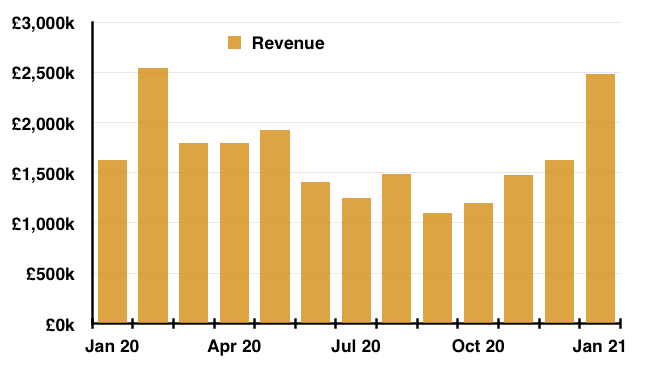 …while the mining margin was the best ever: 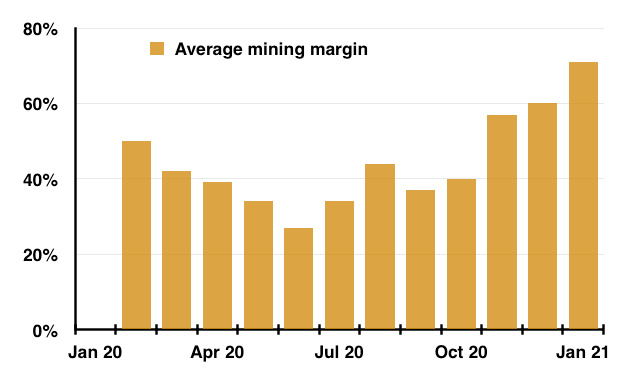 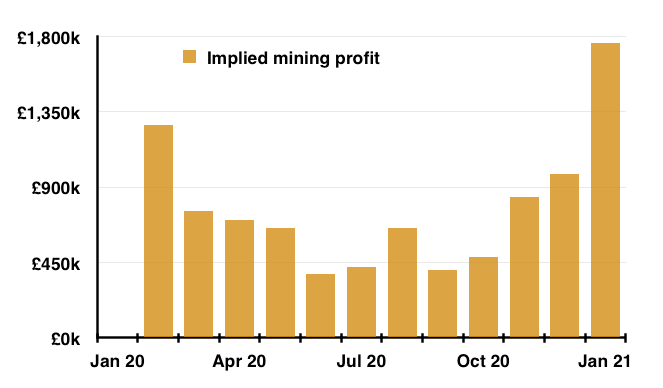 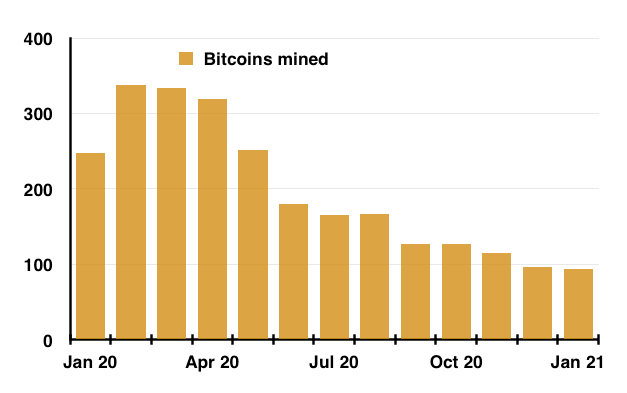 …but the value of each bitcoin collected has surged: 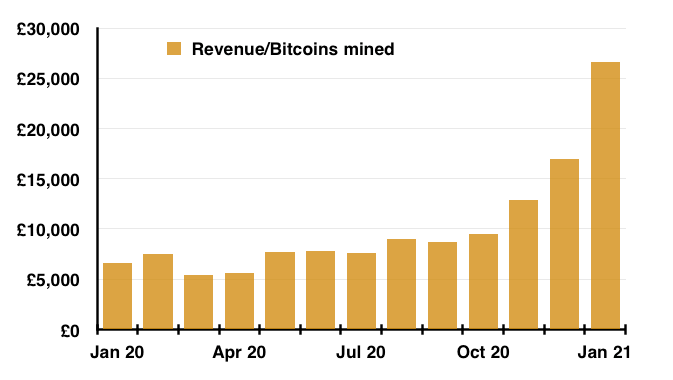 Argo’s bumper revenue for January was supported by a much stronger bitcoin price.

Note that a correlation exists between the bitcoin price and the number of bitcoins the likes of Argo can earn. Simply put, a higher bitcoin price leads to increased mining activity and the less chance any particular miner receives a bitcoin.

You could be forgiven for thinking Argo’s 25-fold share-price surge is a manic bubble just waiting to burst.

But the soaring price seems understandable when you extrapolate January’s performance and plug in some figures from the latest (half-year) results: 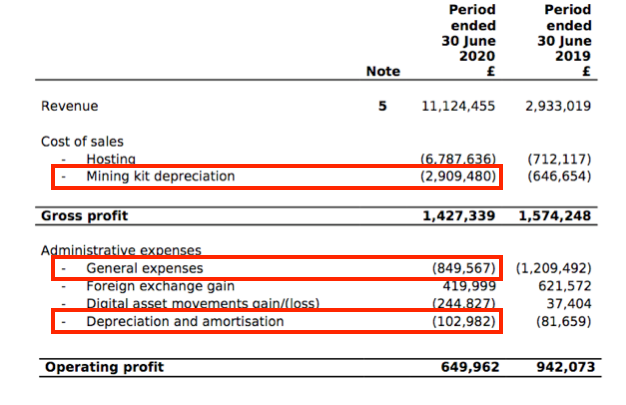 All of a sudden that rocketing share price starts to make sense – the market cap at 5p last October was just £15 million.

Argo is not content receiving only 93 bitcoins a month. The company recently raised £22 million to expand its operations:

“The net proceeds of the Private Placement will be used by the Company for working capital and general corporate purposes, including the expansion of the Company’s mining capacity in Q1 and Q2 of 2021 through a purchase from two leading manufacturers.

This new mining hardware expansion is expected to be installed in batches at Core Scientific’s facilities in the United States between February to June, and is scheduled to be fully operational by June 2021. This expansion will add approximately 610 petahash to the Company’s installed computing power, bringing it to a total of 1,685 petahash or 1,68 Exahash by the end of Q2 2021.”

Petahash is a measure of bitcoin mining power, and essentially Argo plans to spend the £22 million to increase its mining capability by 57%.

This investment allows us to refine our profit estimate further.

Assuming mining success rates and bitcoin prices remain unchanged, a 57% lift to computing capacity ought to lead to January’s monthly revenue rising from £2.5 million to £3.9 million — equivalent to £46.6 million a year.

… and therefore Argo could be expected to invest £20.6 million a year (i.e. £61.9 million every three years) to keep its computers up to date — and therefore sustain its present level of mining success.

The lower profit estimate is due to greater expenditure on mining computers.

Argo’s results for the half-year to June 2020 showed its computers were purchased for £19 million and offered 730 petahash of mining capacity. The historic cost was therefore £26k per petahash.

I am not sure whether Argo will mine as efficiently if its older machines are not replaced. If it can in fact mine as efficiently, then annual computer expenditure should be lower than my estimated £20.6 million. But the risk section of the 2019 annual report suggests significant IT reinvestment is required:

Underlining the notion of higher computer costs, the website for Bitmain – one of Argo’s computer suppliers – presently shows every product has sold out:

Order your Antminer S19 mining rig today and you should receive it during August.

Whether Argo’s operating profit is running at £13.5 million or £10.6 million could be academic given this development:

“Argo Blockchain, the leading cryptocurrency miner based in the UK (LSE: ARB), is pleased to announce it has entered into a non-binding Letter of Intent (LOI) with DPN LLC of New York, setting out the terms for Argo to acquire 320 acres of land in West Texas, USA, with access of up to 800-megawatts of electrical power where Argo intends to build a new 200mw mining facility in the next 12 months.”.

Argo will pay $17.5 million for the land, and then take on a $100 million loan to construct the data centre:

“As part of this project, Argo will also gain access to a pre-negotiated US$100 million credit facility at competitive rates. This will provide Argo with sufficient debt capital to build out the facility and further expand its mining fleet to upscale the Company’s operations and capacity.”

To put the new 200-megawatt facility into perspective, Argo said in November that computers with 430 petahash of power consumed 15 megawatts of electricity.

On that basis, the 200 megawatt Texas facility could add an extra 5,733 petahash of mining capacity — equivalent to more than three times the 1,685 petahash capability expected following the aforementioned £22 million investment.

Does that mean profits could also be three times higher than my £10.6 million or £13.5 million estimates? Your guess is as good as mine.

Note that Argo will issue an as-yet-unspecified number of new shares to fund a deposit to secure the $100 million loan:

“In connection with the proposed acquisition, a circular will be sent out to shareholders shortly to convene a general meeting at which shareholders will be asked to approve the allotment and issue of (a) the new shares to be issued to DPN LLC and (b) the issue of further new shares to raise equity to fund the down payment (or deposit) on the credit facility.”

My reading of the acquisition circular implies Argo is seeking permission to issue up to 17 million extra shares – representing almost 5% of the present share count – for the Texas facility.

Presumably the lender did not feel Argo’s present hodl of 501 bitcoins, which at recent prices is valued at a total £18 million, was a suitable alternative for the deposit. 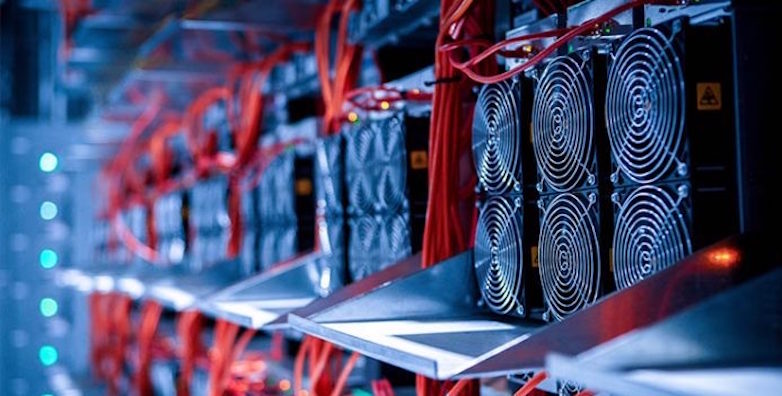 Trying to make sense of Argo’s profit and investment potential is not straightforward.

When I began studying the company the shares were 130p. A few days later they briefly topped 300p to support a £1 billion market cap. Helping the valuation higher has been the bitcoin price – up 40% on the average level seen during January.

The market gyrations are just part of the valuation puzzle. Other considerations include:

Find answers to those questions and you will undoubtedly be miles ahead of the wider investment community. SharePad’s forecasts reveal City brokers have fallen way behind Argo’s newsflow:

Bitcoin is not for everyone, and whether Argo is worth further investigation is something only you can decide.

But you never know; the successful completion of the Texas facility plus a soaring bitcoin price might actually justify a £1 billion market cap. All I can say is judging Argo’s potential before the shares surged 25-fold would have been a lot easier.

Maynard writes about his portfolio at maynardpaton.com and hosts an investment discussion forum at quidisq.com.

He does not own shares in Argo Blockchain.