Skin in the game: Two for the watchlist

Richard uses his “Skin in the game” table to find companies whose directors are major shareholders. The experiment starts off badly with Asset Co., but gets better. Frontier Development and Focusrite could be great owner-managed businesses.

To recap: We can use SharePad to find companies that are run by managers who are themselves significant shareholders. Common sense and various studies tell us that these companies are better long-term investments because their managers are often more experienced and have longer-term goals. In many cases they are a company’s biggest shareholder. Because of their voting power, though, we have to be confident they will not abuse it by voting through changes likely to disadvantage smaller shareholders. Finding out more about the managers and how they have behaved in the past can give us this confidence, but we can start by focusing on companies where the directors own a considerable share of the company, say 5%, but not a majority.

I selected the shares that follow simply because they had the highest concentration of director holdings below 50%, apart from FW Thorpe, Quartix, and Dart, which I introduced in my earlier article. Thumbs down (👎) means the company has not made it into my “Skin in the game” portfolio, and thumbs up (👍) means they have. Putting these companies together in a portfolio makes them easier to keep tabs on, I have not done enough research to invest in them yet!

Directors have a 48% stake but the company, which since 2010 had provided fire and rescue services in the United Arab Emirates, lost its only customer last December. Though it is seeking new opportunities in the Middle East, Asset Co.’s stockmarket value now rests largely on its cash value, which may be bolstered by an additional £34.3m plus interest to come if Grant Thornton, the company’s auditor, loses its appeal against a previous ruling that it was negligent.

Asset co. is clearly a special situation, and far from being a stable business about which we can confidently visualise a profitable future.

Boy did I feel-good the moment I started looking into Frontier. It is based in Cambridge, where I have home advantage. The company’s website is replete with wholesome imagery from the video games it develops. Frontier’s founder, David Breben, co-authored Elite, a video game I played so long ago I can remember little about it except joy. He owns the bulk of the 38% of shares in the hands of directors, and he is the chief executive: 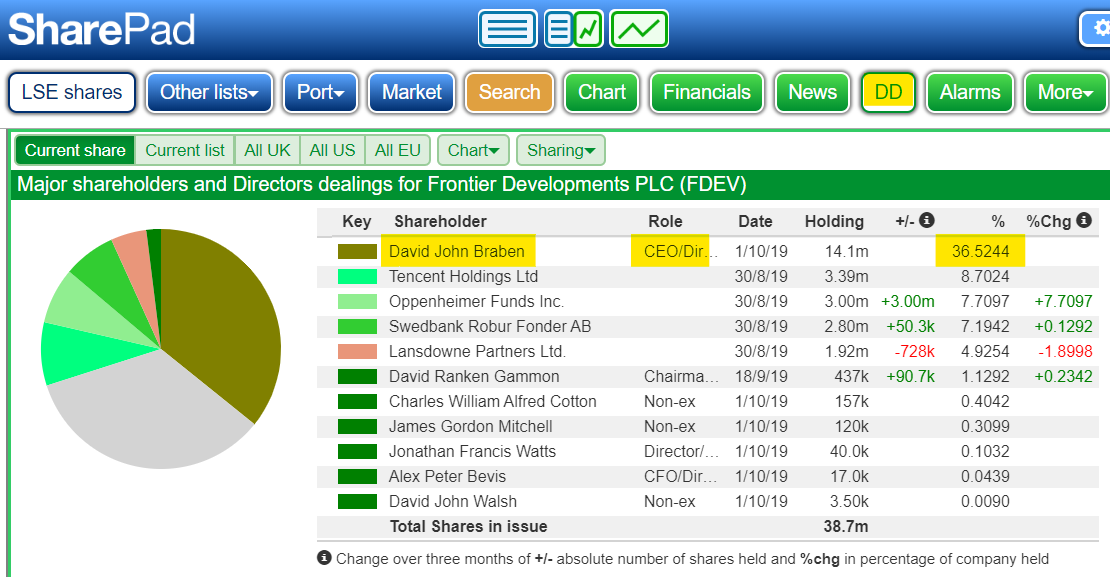 Sharepad’s description of the company alludes to at least two possible sources of competitive advantage, a proprietary technology platform and the fact that Frontier Developments has its own routes to market:

A presentation for investors explains that for its first twenty years, Frontier was a gun-for-hire, a developer making games for video game publishers. But the transition to digital distribution enabled the company to move into publishing its own game franchises. It crowd-funded a sequel to the classic Elite and then floated on the stock market in 2013. Planet Coaster followed in 2016, then Jurassic World Evolution (under licence presumably) in 2018, and Planet Zoo earlier this month. It still uses the technology platform it honed when it was making games for others.

The presentation warns revenue will be lumpy as the company launches new game franchises. Jurassic World Evolution, which sold two million copies in its first seven months, produced a huge bump in revenue in 2019 that probably explains why analysts are circumspect about 2020: 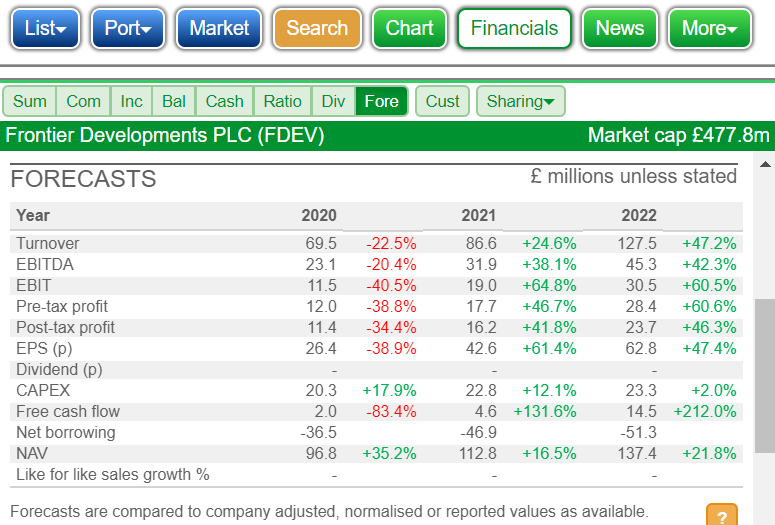 But Frontier has all the makings of a good home-grown owner-managed business. The trouble is that everybody seems to know it. All the key stats look good except the debt-adjusted PE of 26, which is an unreliable guide to value anyway, considering the likely volatility of earnings.

A high and volatile PE is no reason to strike a company out. Two things can happen over time that make the company worth following: The valuation can fall, or we can prove to ourselves the shares are worth the premium.

A company with an appropriate ticker code always raises a smile. Focusrite develops and distributes hardware and software for musicians. Just under 38% of the shares are owned by its founder and chairman, Philip Dudderidge, and once again SharePad’s summary page tells us useful information: 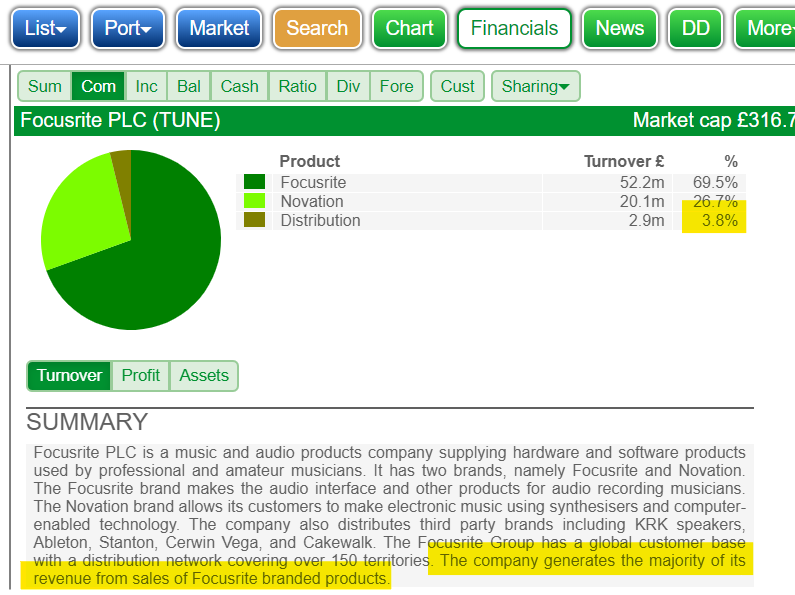 Focusrite earns the bulk of revenue from its own brands, principally Focusrite, which supplies recording products, and Novation, which supplies kit for making electronic music: software, synths, keyboards and something called a “groovebox”. As you can probably tell, music is not in my soul, so I do not know these products are any good. Focusrite makes good money from them, though, which is a good sign.

Results statements can be baffling when you are unfamiliar with a business, but Focusrite published the results for the full-year to August 2019 last week, and it quickly answers a lot of questions, another good sign.

Dudderidge founded Focusrite in 1989 and acquired Novation in 2004. The company describes their products as “category leaders” and the firm floated five years ago in December 2014 with the intention of building on their success and acquiring other products used by their customers. It took four and a half years to make the first acquisition, ADAM Audio for 18m euro. Both the delay and the modest outlay tell me Dudderidge is prudent, as you might expect of somebody that owns 38% of the business to be. ADAM makes monitor loudspeakers for sound engineers and recording artists.

Focusrite’s short record on the stockmarket makes it difficult to see how the company has performed in more difficult times, for example in the financial crisis of 2008, but it is not impossible to form a view. A quick squiz at Focusrite’s annual accounts for the years 2009 and 2010 filed at Companies House suggests demand held up quite nicely.

Focusrite is growing worldwide, and it is on a growth company rating. All the key stats look good, and so, unsurprisingly, the shares are not obviously cheap on a debt adjusted PE of 24.

My first pass can find little to fault, though. The company’s mission is to make music making accessible and affordable to all, from professionals to people who don’t know a groovebox from a glovebox.

I may fit in Focusrite’s target market, after all! It certainly fits in my watchlist.

Skin in the game portfolio

The combination of a simple filter to find straightforward companies to analyse (my KISS filter) and a sort by director holdings is finding some very promising businesses. If I continue adding companies to the “Skin in the game” portfolio at a rate of two for every three it discovers, the list of potential investments is going to grow and grow…