Screening For My Next Long-Term Winner: Rightmove 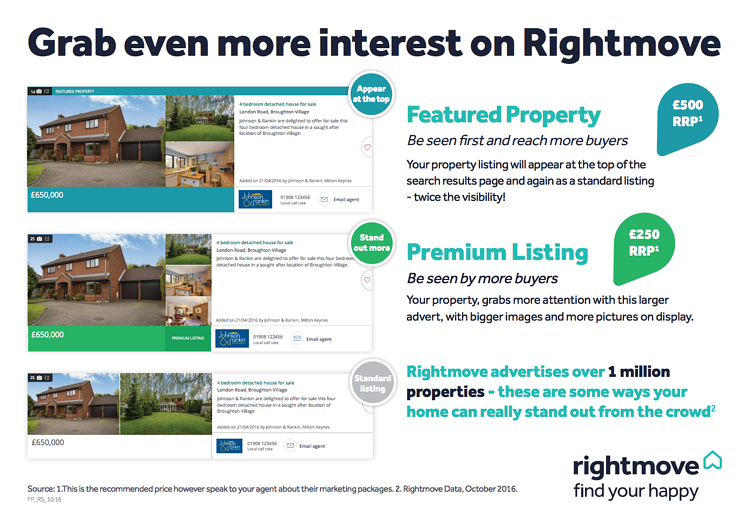 Studying free cash conversion is vital when evaluating a set of accounts.

The measure compares free cash flow to reported earnings, and can indicate whether a business is a ‘cash fountain’ or a ‘cash guzzler’.

Ideally we want to own companies that generate plenty of spare cash, because such cash can:

No set rules exist to determine what exactly is an acceptable rate of cash conversion.

Most companies will convert less than 100% of their profit into free cash because some cash will be reinvested back into the business to fund future growth.

Mind you, a more sinister reason for low cash conversion is reported profits being fudged in some way.

Broadly speaking, a consistent conversion of 80% or more is quite satisfactory while a regular 50% or less is not ideal.

To identify the very best cash generators, I screened the market using the following two criteria:

To narrow the field down further, I looked for companies where the cash flow had been put to good use by clearing debts and paying higher dividends. I therefore added the following two criteria:

SharePad returned only 13 shares, including Rightmove — the property-search website that boasts perhaps the most remarkable accounts within the FTSE 100: 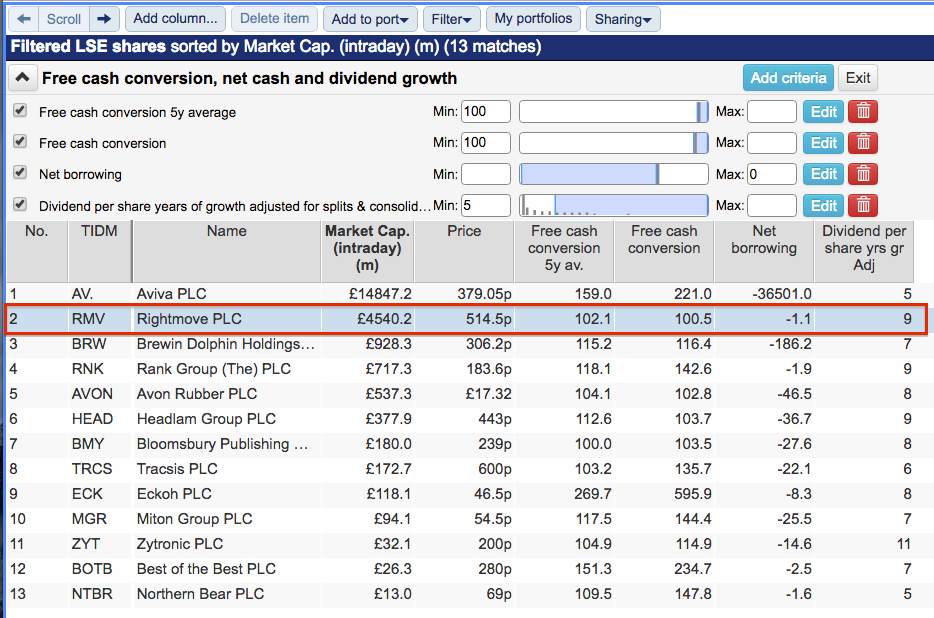 (You can run this screen for yourself by selecting the “Maynard Paton 23/10/19: Rightmove” filter within SharePad’s amazing Filter Library. My instructions show you how.) 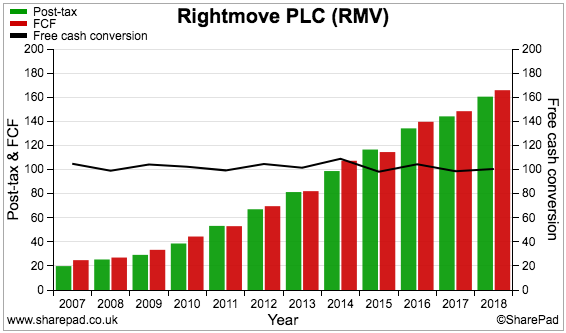 The chart above shows the full extent of Rightmove’s prodigious cash conversion — earnings have converted at 100% or so into cash for more than ten years (black line, right axis).

Perhaps not surprisingly, the cash conversion has ensured a cash-positive balance sheet since 2009: 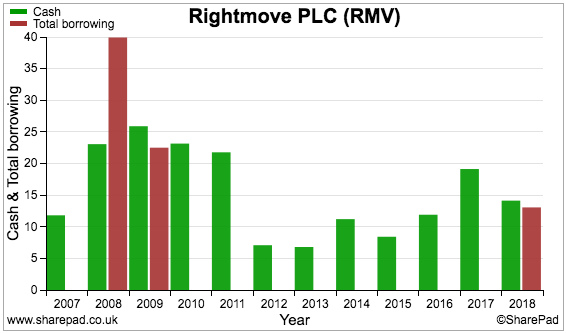 The cash conversion has also supported an illustrious dividend record: 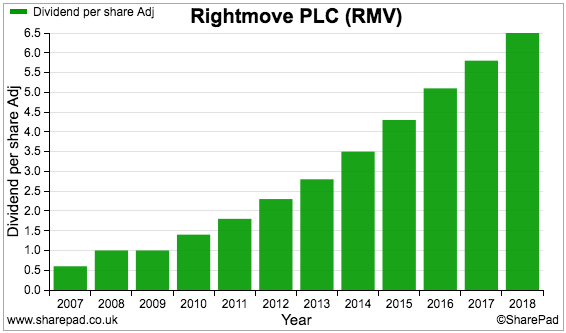 The payouts have been the icing on the cake for long-term shareholders. Rightmove’s shares floated at 33p during 2006 and have since surged 16-fold: 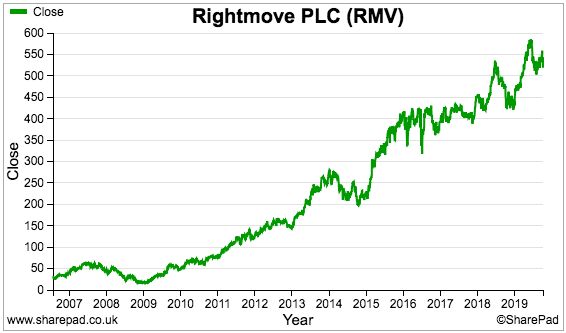 Time now to look at Rightmove in more detail.

The business of Rightmove

When Rightmove.co.uk was launched during 2000, the four backers were among the country’s largest owners of estate agents.

By placing all of their properties on a single website, the founders ensured Rightmove gained a head start as an industry ‘aggregator’.

Offering free listings to other estate agents then enhanced the website’s ‘network effect’ of linking house-buyers to house-sellers.

Although listing fees were introduced during 2002, half of all UK agents had become paying customers by 2004.

These days approximately 80% of UK online property searches are conducted on Rightmove.co.uk and more than 90% of UK estate agents are customers.

Rightmove’s original backers sadly did not participate fully in the company’s share-price success.

All four founders had disappeared from the share register by 2009, with Connells painfully exiting the stock during late 2008 at just 16p. That stake would today be worth more than £1.1 billion. 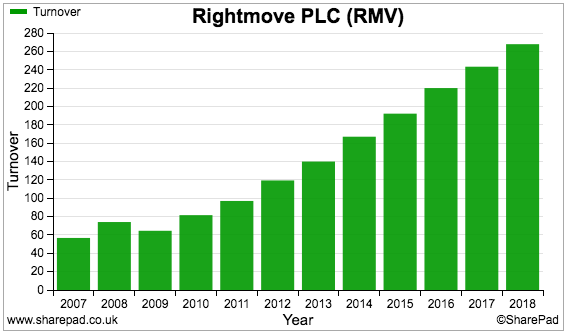 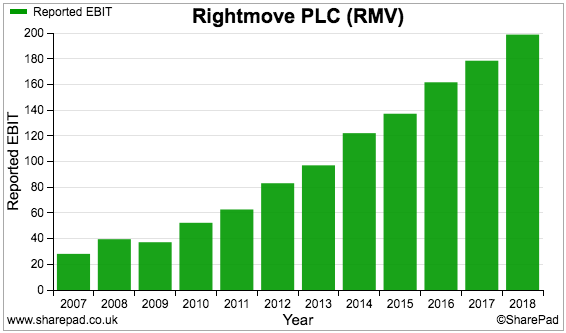 Driving the performance has been a growing customer base and — significantly — average advertising income per customer advancing by around 10% a year: 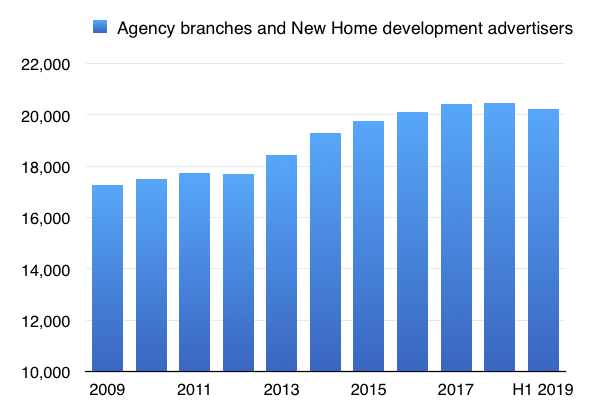 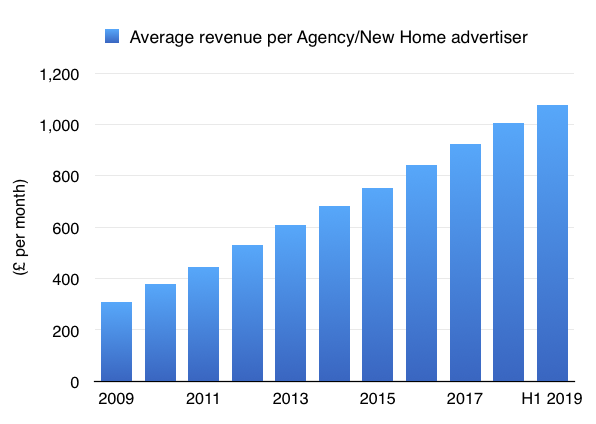 As we will see in a minute, not every estate agent is happy paying Rightmove in excess of £1,000 a month. Note, too, that the number of advertisers has plateaued around the 20,000 mark for the last few years. 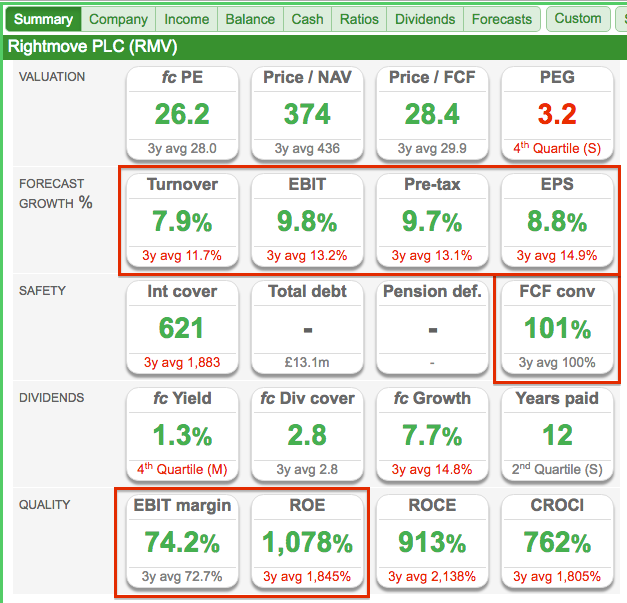 Let’s look further at the ratios. 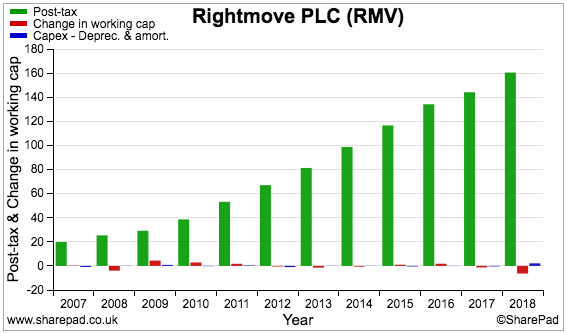 Compared to free cash flow, next to nothing has been absorbed into working capital (red bars) or spent as capital expenditure beyond the depreciation charged against reported earnings (blue bars). 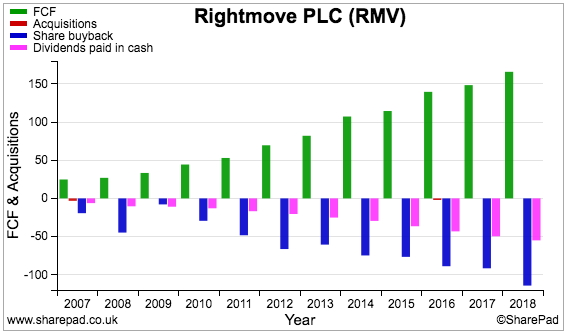 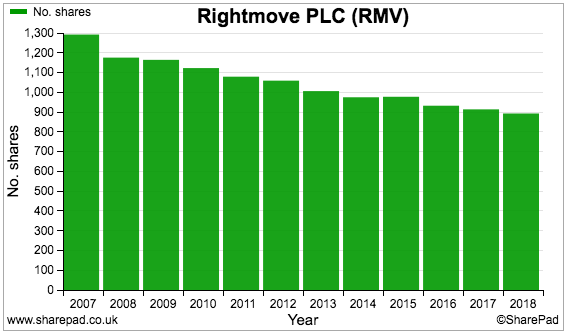 Some £685m was spent purchasing 386 million shares — equivalent to an average purchase price of 177p. With the share price now three times that level, the company’s buybacks have been a textbook example of superb capital allocation.

Distributing all of the company’s cash flow as dividends or buybacks has led to a quite extraordinary phenomenon — earnings have advanced substantially while the equity base (or net asset value) has remained at a broadly similar level: 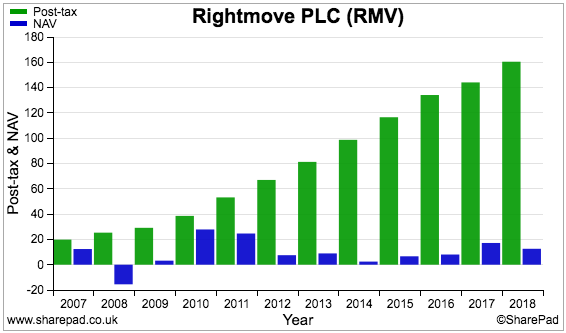 Rightmove is therefore one of those exceptionally rare and prized businesses that seemingly grows on ‘thin air’ — whereby no extra capital is apparently needed to increase earnings significantly.

The small amount of required capital has led to some incredible, 1,000%-plus ROE numbers: 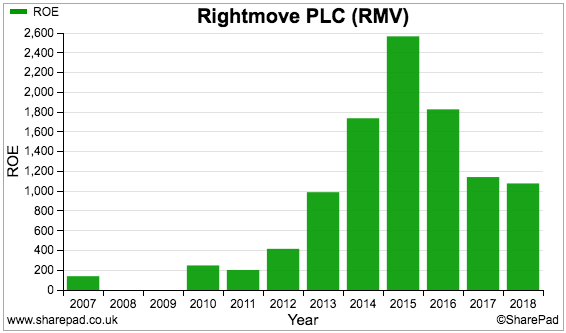 (The figures for 2008 and 2009 are not shown because Rightmove operated with negative net assets during those years (due to debt), which complicates the ROE calculation)

The aforementioned ‘network effect’ of Rightmove’s website has proven to be extremely lucrative over time. The company’s operating margin has edged up to an almost implausible 70% during recent years: 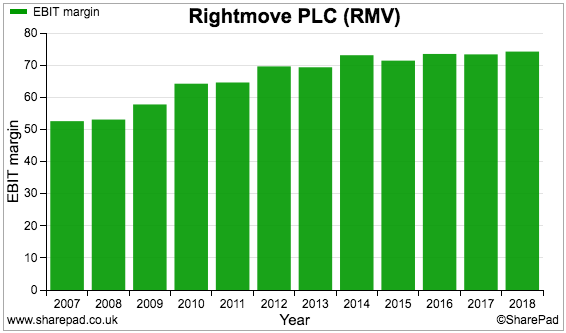 Such immense profitability underlines the notion that Rightmove boasts an astonishing competitive advantage and incredible economies of scale.

Another sign of impressive progress is revenue per employee tripling to a sizeable £540,000 during the last decade: 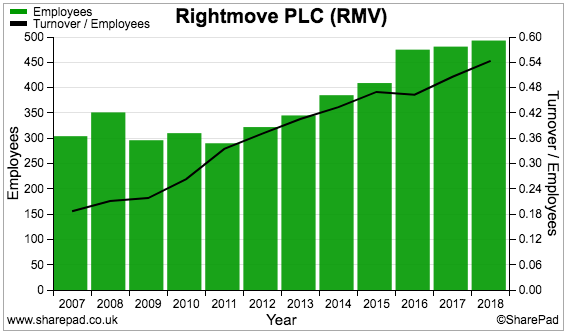 Revenue and profit advances of between 7% and 9% are expected during the next few years:

Interim results published during July revealed turnover up 10% to £144m and operating profit up 10% to £108m. Going on SharePad’s 2019 forecasts, second-half sales and profit are expected to advance by 6% and 5% respectively.

The directors were pleased with the first-half performance:

“Rightmove’s subscription advertising model, together with the strength of our proposition for both customers and consumers now and in the future, supports the Board’s continued confidence in delivering its expectations for the full year.”

However, the results were not flawless. Rightmove charges estate agents on a per-branch basis, and the number of branches charged dropped by 3%:

In fact, branch numbers at less than 17,000 are now back to levels seen during 2014. Rightmove blamed the reduction on a tough housing market:

Counterbalancing the lower number of branches was revenue per branch increasing by 9%. Estate agents upgrading their subscriptions — alongside general price rises — now leaves the average branch paying Rightmove more than £1,000 per month.

What the agents say

A skim through the trade press suggests not every estate agent is happy paying £1,000-plus every month to Rightmove.

For example, industry website Property Industry Eye regularly features articles about Rightmove — and the headlines are not exactly complimentary:

“Thrillingly got shot of Rightmove yesterday, leaving us on just Zoopla, Prime Location and OnTheMarket… they didn’t care that we were leaving them and frankly we feel the same about them. Companies that abuse their customers… get straight-talking feedback that hits them in the pocket. GOODBYE AND GOOD RIDDANCE RIGHTMOVE!”

“I left Rightmove three months ago for this exact reason and have seen no decline in revenues. OnTheMarket have really got their act together and with the number and quality of leads I get from both OTM and Zoopla my business is still as strong as ever. Vote with your feet and leave Rightmove!”

“Was told my fee was going to raise by £300 per month! Have taken the decision to give notice to Rightmove and have signed up with Zoopla who have offered me a deal that will save me £1,000 per month! I listed my first properties yesterday onto Zoopla and received a phone enquiry on one of the properties within two hours! Had nothing from Rightmove on this property for 2 months!”

True, the disgruntlement towards Rightmove may be strongest among estate agents with only one or two branches. However, such agents do collectively represent approximately half of Rightmove’s customer base: 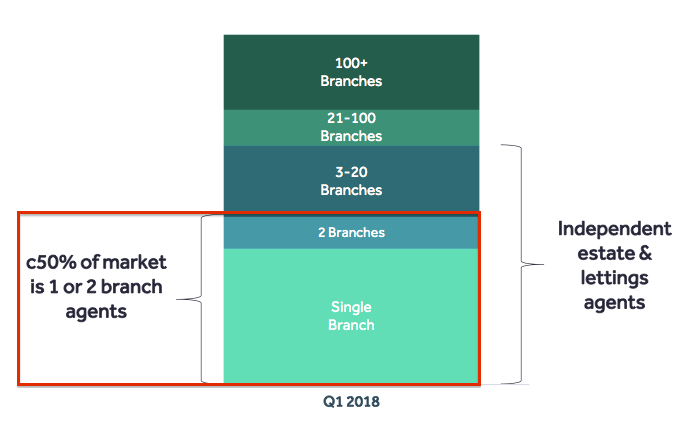 Aggrieved estate agents form the shareholder backbone of OnTheMarket, a rival property-search website launched in 2015 that claims to offer “sustainable fair prices” to its agent advertisers.

OnTheMarket floated during 2018, since when the share price has gone nowhere while losses have widened: 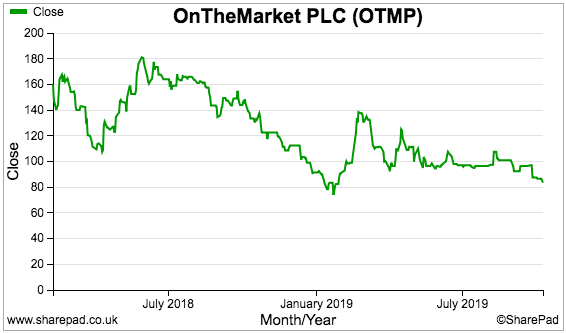 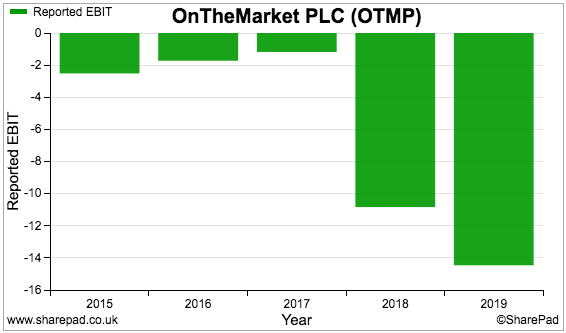 Something to consider about OnTheMarket is that its agent customers will receive free shares after they sign up to long-term contracts. The firm’s share count could increase by up to 50% — which may well dilute outside investors.

For now at least, OnTheMarket is a ‘cash guzzler’ and does not appear to be an obviously enticing investment. But perhaps that does not matter — the company’s 2,000 or so estate-agent investors may not be expecting a multi-bagger anyway.

Instead, the agent shareholders could be perfectly happy if their £288 a month simply yields as much commission income as £1,000 or so spent through Rightmove.

Rightmove certainly looks like a ‘cash fountain’. In fact, the company’s dominant market position has created probably the most stunning accounts in the FTSE 100.

Returns to shareholders have been magnified by those savvy buybacks while the trailing P/E — at approximately 30 times — reflects the all-round first-class performance: 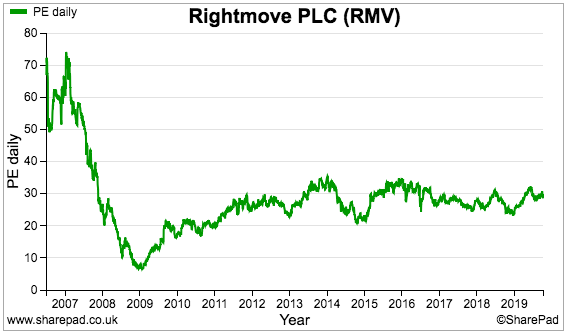 The question now is whether Rightmove can sustain those excellent financials.

With most UK agents already using the website, the easy path to further growth is by continuing to raise prices by around 10% a year.

Rightmove might argue the estate agents can afford it. Agents collectively spent a lot more on advertising before 2008 (mostly through local newspapers) than they spend today:

However, housing transactions are much lower now than they were back then:

Factor in low-cost online competition, too, and estate agents typically no longer enjoy the level of income they once did. The share price of Countrywide — a Rightmove founder and now its largest advertiser — tells a grim story: 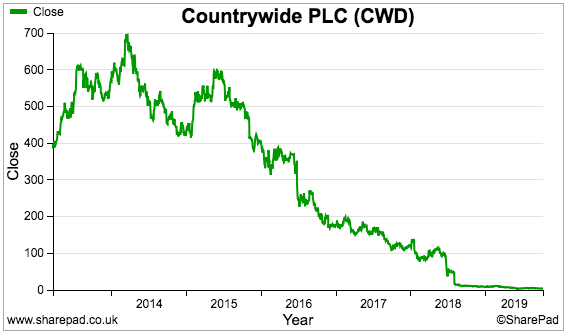 All this leaves Rightmove as a unique investing quandary. A commanding competitive advantage has created wonderful cash flows for shareholders, but for how long can the website extract ever-greater fees from the mature and unhappy customer base?

If the business really is as powerful as the financials make out, then most estate agents will have no option but to keep paying Rightmove for some time to come.

Disclosure: Maynard does not own shares in Rightmove.