What PZ Cussons’ cashflow tells us about its strategy

Having found PZ Cussons through his Keep It Simple, Stupid filter, Richard examines the company through its cash flow statement. To his delight, he finds a company promising to keep things simple too.

Two weeks ago I augmented my Keep it Simple, Stupid filter to keep things even simpler. The filter is designed to rule out shares with big obvious complications: shares that cannot be analysed with the normal ratios because they do not make any money, shares in heavily indebted companies where the main focus of analysis might become the company’s ability to service the debt, shares that have not been around long enough to establish a track record for us to investigate, and shares in businesses that are likely to have changed radically because of big acquisitions.

Then I sorted the list to show companies that have published annual reports most recently at the top, one final simplifying gesture to ensure I have up to date information.

The first three results were Gateley, PZ Cussons, and Photo Me.

Gateley is a commercial law firm, and to keep things simple I quickly passed it by. Like other professional services firms, architects and recruitment consultants for example, Gateley offers a bewildering array of services and it will be very hard to work out what, if anything, makes the company special. Since its main asset is probably the skills and connections of the lawyers it employs, it is a difficult business for an outsider to assess. I would not rule out analysing and subsequently investing in a professional services firm, but I am not going to make life easy if I choose Gateley today.

Honing in on PZ Cussons

PZ Cussons, on the other hand, makes and sells things, which is in my comfort zone. You probably know it by ‘personal care’ brands like Imperial Leather, Original Source, Saint Tropez, and Carex but it also makes and sells household cleaning products, foods and fridges. Choosing to investigate PZ Cussons should make life easy because I have considered investing in it before, in 2016. Then its largest market, Nigeria, was in recession following a collapse in the oil price and the company’s debt had risen substantially because of acquisitions it had made around the World. It seemed PZ Cussons had been trying to buy its way to a more prosperous future and I doubted the shares were good value. 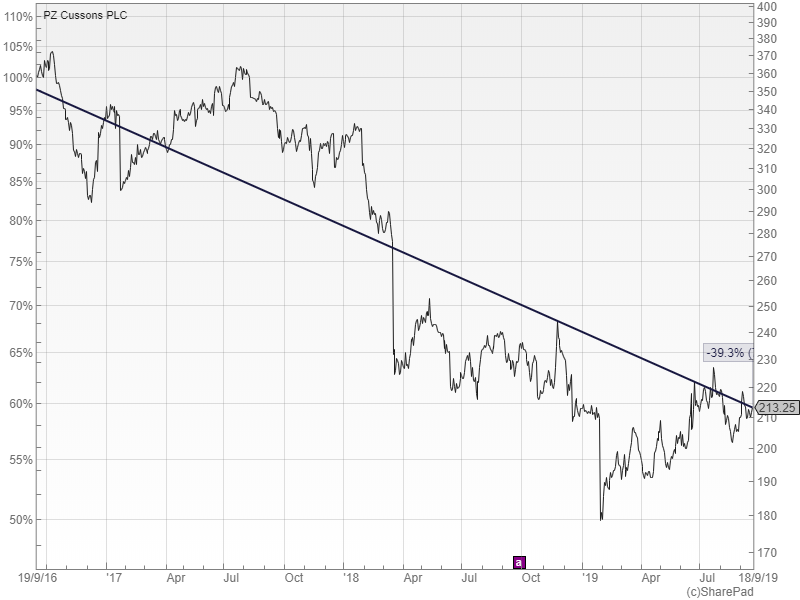 Things change. The share price has fallen 40%, so the valuation may be more attractive, and the KISS filter suggests change is in the air too. Remember, it is designed to rule out companies that have spent more on acquisitions than they have earned in free cash flow, and PZ Cussons passed.

PZ Cussons spent more than it earned on acquisitions before 2016, but since then it has not made any: 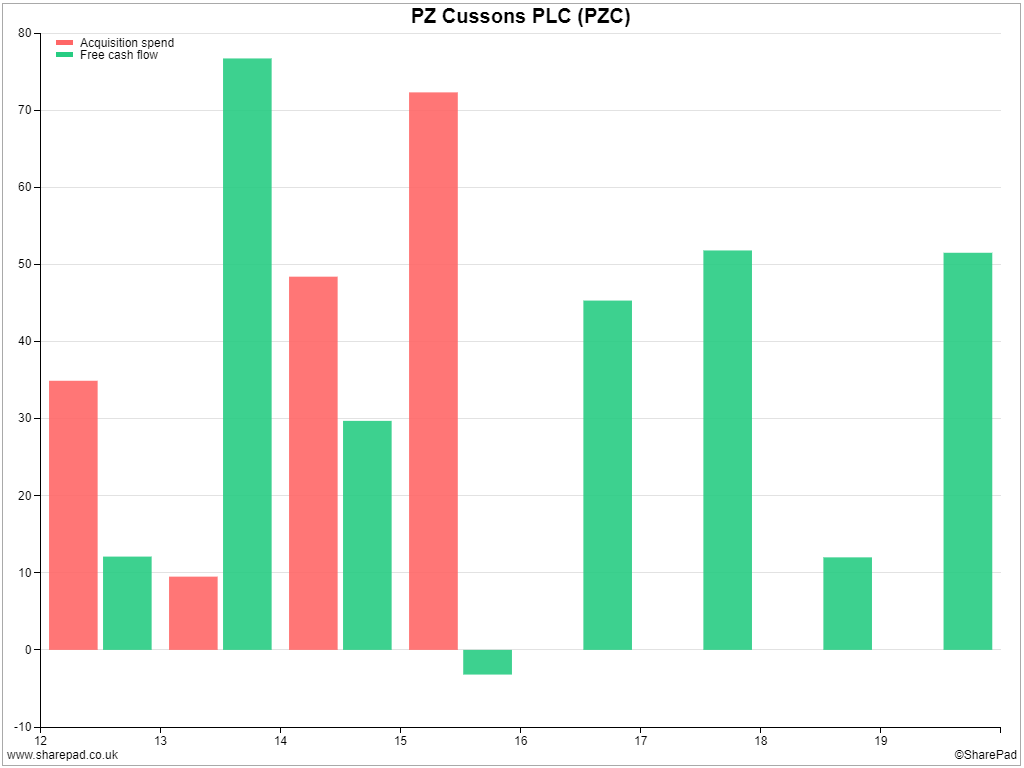 Net borrowing remains stubbornly high after 2016 in comparison to the period before, though: 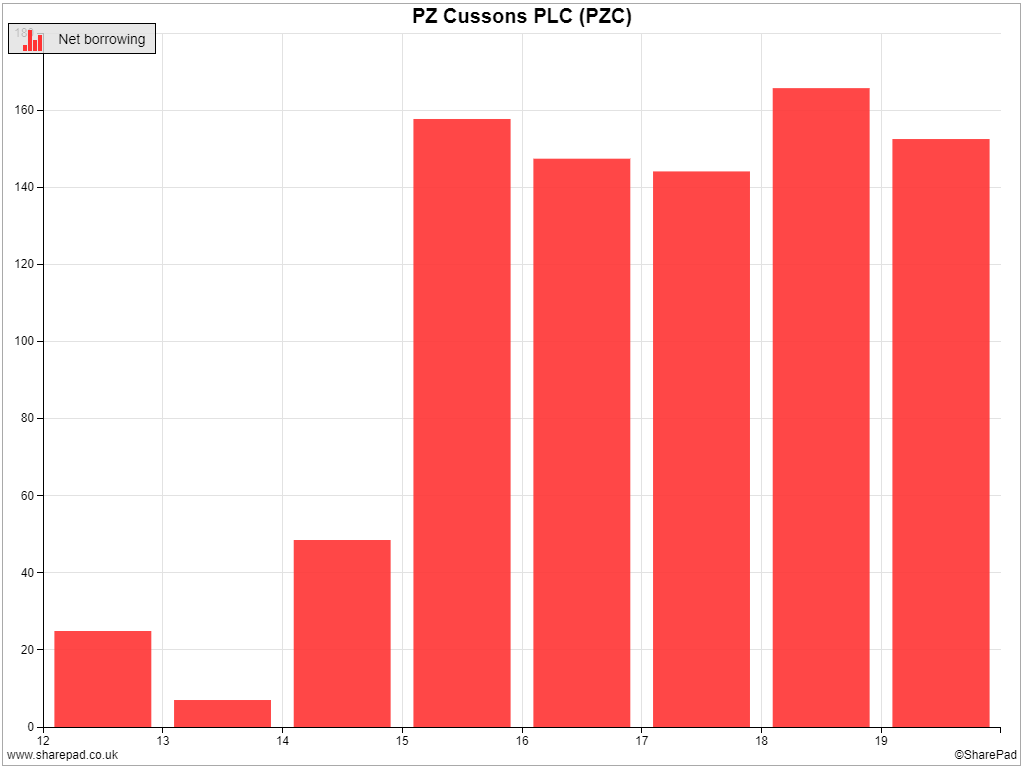 The use and abuse of free cash flow

The stubborn resistance of debt is disappointing. Free cash flow is the amount of money a company has left over at the end of the year having paid its operating costs, interest and tax for the year. A company can do a number of things with free cash flow. Primarily, it can:

So with diminished investment, no acquisitions and little in the way of debt repayment, PZ Cussons must be returning most of its free cash flow to shareholders.

And here are the dividend payments and buy-backs:

To make it easier to see how returns to shareholders are gobbling up free cash flow, we can export the cash flow statement from SharePad (click Sharing and Export Data…) and isolate the major items PZ Cussons has chosen to spend its free cash flow on highlighted above:

If we divide the period into two four year periods, 2012 to 2015 and 2016 to 2019 we can see that it clearly was a big spender in the first period, spending a cumulative £166m more than it earned on acquisitions and payments to shareholders, which is why PZ Cussons debt ballooned to £150m-odd. Although the company has earned a cumulative £161m in cash over the last four years, significantly more than it did in the previous four, the dividend (now frozen) and share buy-backs (now stopped) have consumed all but £18m of it, which it did use, in part, to reduce net debt. That’s why the red bar in the net borrowing chart earlier in this article is ever so slightly below the level it was in 2015.

Of course, returning money to shareholders is a good thing but it also looks like PZ Cussons is constrained. It is not currently generating enough cash to repay borrowings, invest in growth, or indeed grow the dividend. A thriving company should be able to do all of these things, so something needs to change.

In the rear-view mirror, PZ Cussons is a pretty un-enticing long-term investment, but maybe and perhaps belatedly, the board has come to the same conclusion. The 2019 annual report contains the results of a strategic review.

Gratifyingly, because my objective was to keep things simple, PZ Cussons says its strategy is to simplify the business. It will focus on just thirteen brands, mostly in beauty and personal care. These brands, like Imperial Leather and Original Source, earn high profit margins. Three of the brands are partnerships serving the Nigerian market with white goods, cooking oil and spreads, where they have a large market share. If the Nigerian economy recovers, PZ Cussons thinks these brands will grow “disproportionately”. The company will dispose of food and household goods brands, because in slow growing developed economies their growth potential is limited and people are increasingly willing to buy discounters’ own brands. When it comes to soap and tanning products, it seems, we are more discriminating.

This is evidence of a proper strategy insofar as the company is making hard choices. It has accepted the diversification policy was a mistake, a diworseification to use fund manager Peter Lynch’s wonderful phrase, which must have been very difficult for the chief executive, Alex Kanellis, because he was responsible for it. He has been running the company since 2003. In the annual report he says, “In recent years we’ve invested in too many categories and initiatives,” which is as close to a mea culpa as we will get from a sitting executive.

In the disposals though, PZ Cussons might find the cash resource it needs to invest and/or pay back debt. By investing in market leading products where it already has an advantage (brand recognition), it plans to develop new products and go for scale. Much depends on whether it can find buyers for the secondary brands who are willing to pay a decent price.

It is off to a quick start. In August, PZ Cussons announced the £41m sale of Minerva, which sells olive oil in Greece, and Luksja, a Polish personal care brand.