Screening For My Next Long-Term Winner: Imperial Brands 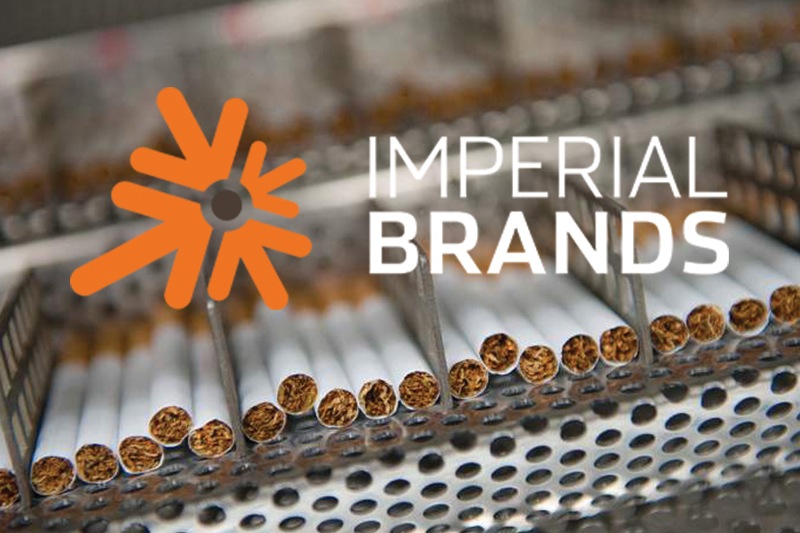 Imagine this. You find a blue-chip company that offers:

* Management guidance of further 10% annual dividend growth “over the medium term”, and;

Too good to be true?

Well, that is the situation at Imperial Brands.

Imperial appeared on my SharePad radar following a very basic search. I simply listed the FTSE 350 index in forecast-yield order: 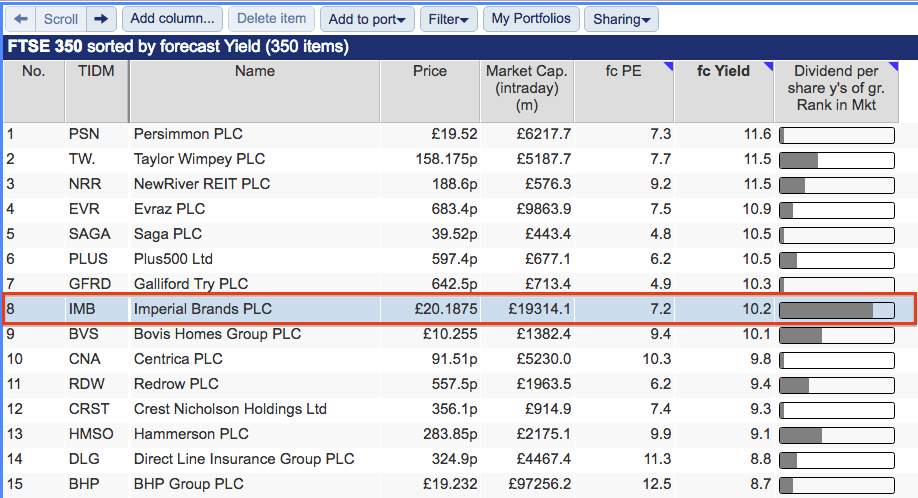 Imperial stood out because the group’s history of dividend growth was a lot longer than the records of the other high yielders.

The chart below shows the tobacco firm’s beautiful run of dividend payments, plus the estimated payouts for beyond 2018: 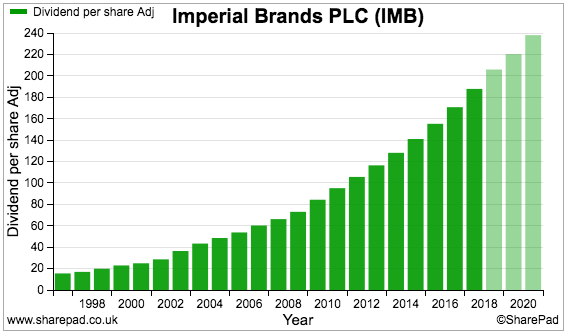 This next chart shows the share’s dividend yield more than doubling since 2016: 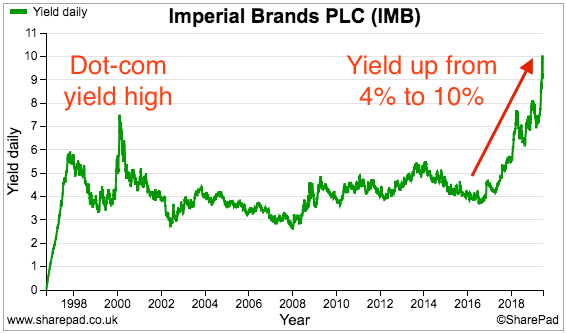 Veteran investors may recall Imperial offering an excessive yield during early 2000 and the latter stages of the dot-com boom.

Back then, ‘old economy’ tobacco stocks were seen as highly contrarian ‘deep value’ investments in a manic bull run…

…until the tech bubble suddenly burst.

At that point, everyone scrambled back into established businesses that had proper earnings and dividends: 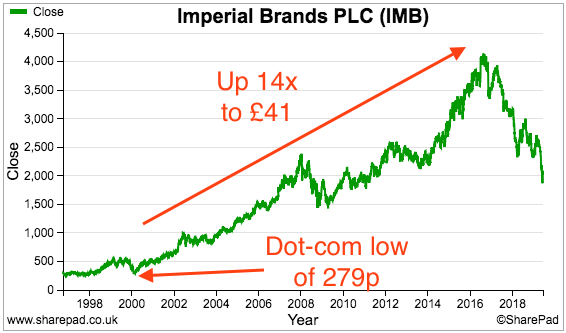 The obvious question now is whether Imperial is once again trading at bargain-basement levels.

Let’s employ SharePad to find out.

The history of Imperial Brands

Imperial Brands can trace its origins back to 1901, when thirteen British cigarette companies formed Imperial Tobacco to fend off competition from the United States.

A decade under the ownership of Hanson then refocused Imperial back to tobacco, which culminated in the business being spun off and floated in 1996. 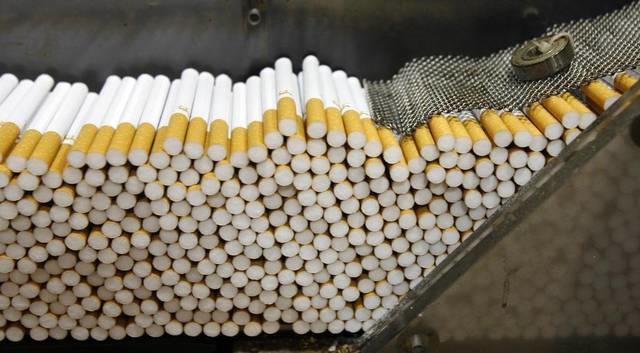 A series of chunky acquisitions — notably paying £4 billion for German firm Reemtsma (2002), £9 billion for French-Spanish company Altadis (2008) and £5 billion for various US brands (2015) — has since cemented Imperial as one of the tobacco industry’s ‘big five’ operators.

The UK, Germany, France and the States remain Imperial’s major markets, with other sales derived mostly from Russia, Japan, Australia, the Middle East and North Africa.

The acquisitions have ensured Imperial’s revenue and operating profit have increased over time, although progress has not been as smooth as the dividend: 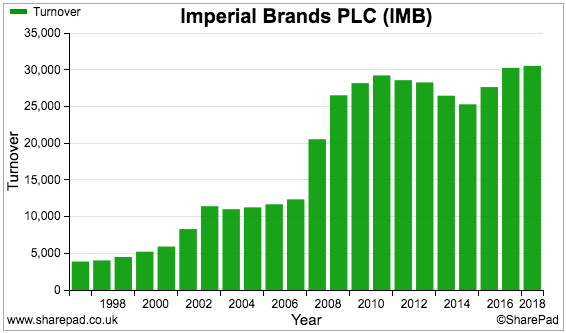 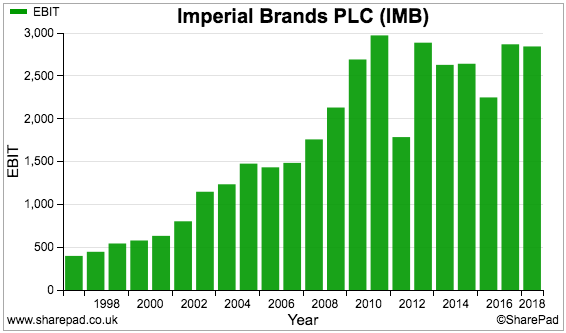 That earlier price chart showed the shares rallying a super 14-fold from the flotation (and the early 2000 low) to a £41 high.

However, Imperial’s market cap has since halved to £19 billion to offer that 10% dividend yield.

“Tobacco is one of the best-performing sectors ever created. It is living proof the best industries are those which the government is opposed to and intervenes in, because tobacco firms are not allowed to advertise and it is almost impossible for new entrants to get into the market.”

(Mr Smith gives a two-minute monologue on the attractions of the tobacco sector within this youtube video.)

Despite decades of declining tobacco consumption, the industry has continually lifted prices and reduced costs, which in turn has allowed earnings to creep higher and support generous dividends.

Mr Smith bought Imperial shares when he launched his Fundsmith fund in 2010. He subsequently disclosed the investment as a top-ten holding for several years.

Then during 2017, Mr Smith sold out. He explained the sale thus:

“We had become increasingly concerned about [Imperial’s] positioning in terms of its lack of exposure to the developing world and to the next generation reduced risk products such as heat not burn devices, all of which has led to volumes falling at a rate that it is difficult to cope with. We were even more concerned by the management reaction which we literally could not understand.”

Mr Smith has therefore not lost his liking for the tobacco sector — he has just lost confidence with Imperial. I calculate Mr Smith sold his Imperials at £35.

Imperial’s SharePad Summary is shown below: 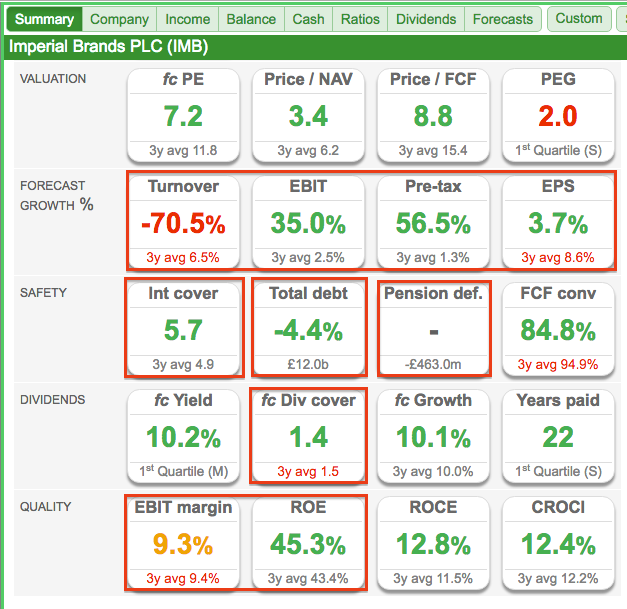 I am drawn to the following statistics:

1) Revenue, profit and earnings per share are all expected to diverge significantly (second row);

3) The all-important dividend is covered 1.4 times by earnings (fourth row), and;

Let’s start with the dividend cover:

This chart compares Imperial’s earnings per share to its dividend per share, and includes the resultant dividend cover (right-hand axis): 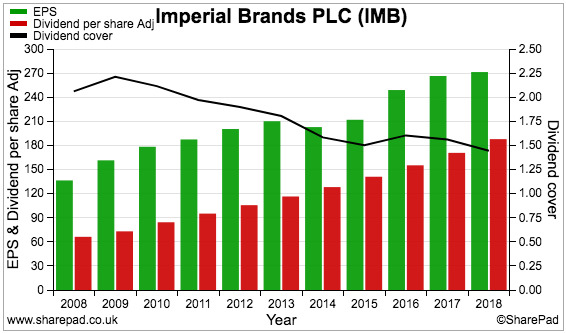 The dividend-cover trend is not great, but a 1.4x level does not flash immediate danger to the payout either.

This next chart compares Imperial’s free cash flow to its dividend payments, and also shows the resultant cover (right-hand axis): 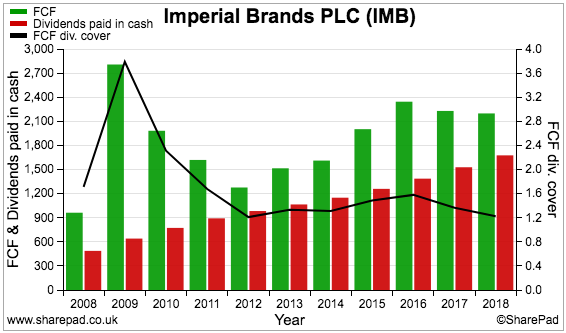 Again, the trend is not great but not super-alarming either. Imperial had free cash of £500 million or so left over after paying last year’s £1.7 billion dividend.

As far as I can tell, these SharePad charts do not signal any obvious payout problems.

Imperial has operated with net debt since its flotation. The level of borrowings increased significantly following the 2008 purchase of Altadis: 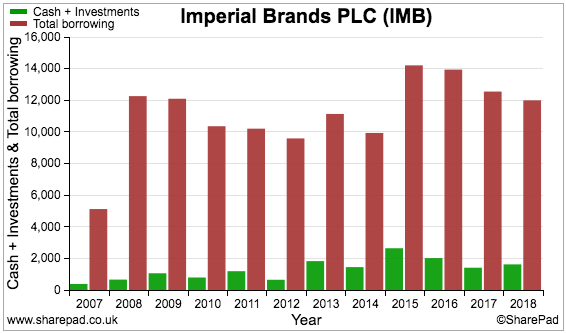 The chart below shows the scale of the Altadis acquisition (and the 2015 purchase of various US brands) in comparison to Imperial’s free cash flow: 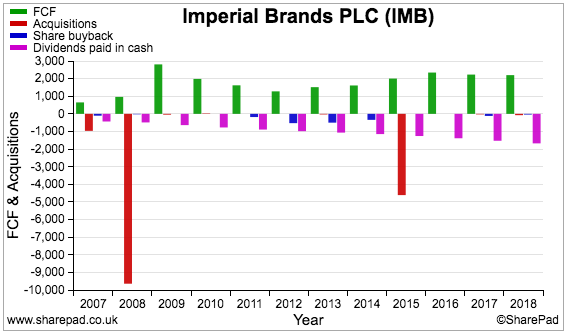 Imperial’s borrowings are large when compared to earnings: 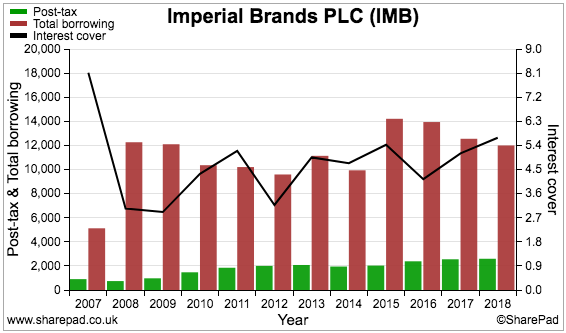 In addition, interest cover — the SharePad calculation for which includes items relating to Imperial’s pension scheme — has bobbed around the rather slim five-times mark.

I calculate Imperial pays approximately 4% interest on its debts and that operating profit covers actual interest payments about eight times. Such debt numbers do not strike me as reckless and are not unusual among similar FTSE 100 businesses.

In fact, the annual report small-print reveals the banks will allow Imperial to borrow a further £4 billion if need be.

I should add that Imperial is planning to raise up to £2 billion from various asset sales during the next year or so.The net debt position may therefore soon reduce. 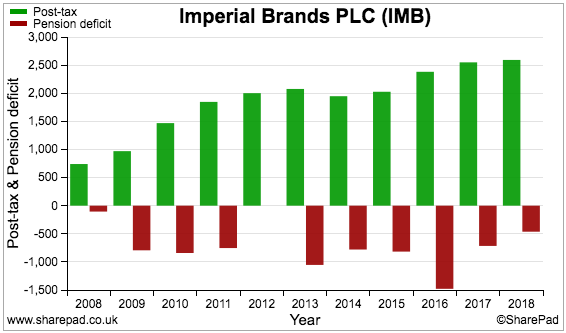 During 2018, pension scheme assets of £5 billion and employer contributions of £158 million seemed more than adequate to pay annual member benefits of £281 million.

All told, I cannot see the prospect of imminent debt/pension troubles as a reason for the shares to offer that 10% dividend yield.

Prior to the 2008 Altadis purchase, Imperial’s ROE was in the 100%-plus stratosphere: 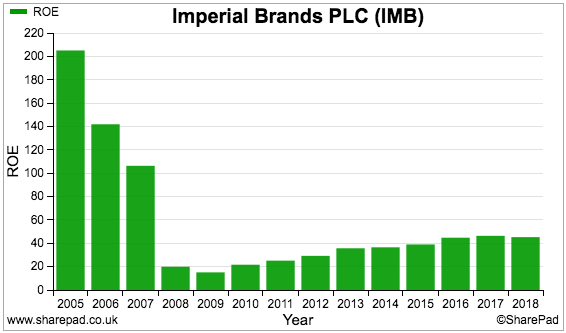 The exceptional ROEs back then were due to Imperial’s liabilities (mostly debt) almost equalling Imperial’s assets (mostly acquired intangibles) to leave relatively little in the way of shareholder equity: 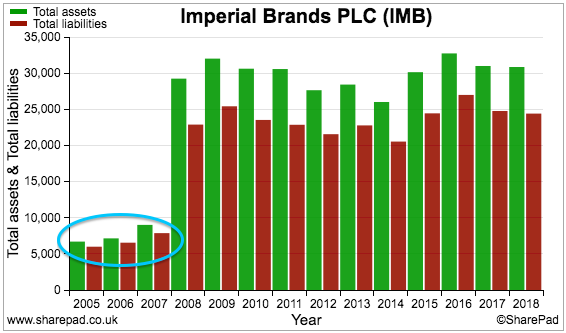 Post-Altadis, the gap between Imperial’s assets and liabilities has widened to create a larger shareholder equity base (red bars below). However, earnings have not increased at a commensurate rate: 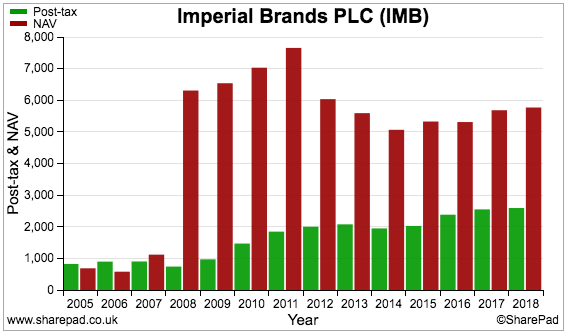 Imperial’s debt has certainly enhanced the group’s ROE. The group’s return on capital employed (ROCE), which adjusts for debt, is a modest 10-15%: 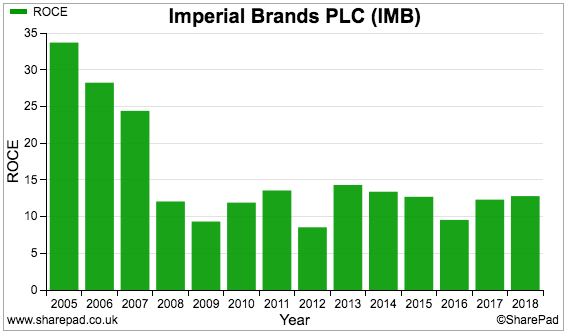 “We typically seek an overall internal rate of return in excess of 13 per cent across the investments we make in order to support our investment choices and underpin returns for shareholders.”

Everything is pointing to Imperial’s debt-funded acquisition strategy leading to the somewhat average ROCE — which I can’t say justifies the 10% dividend yield. 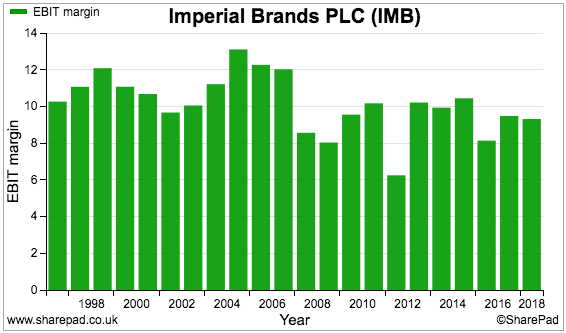 Imperial’s tobacco margin should arguably exclude government duties, as that cost is effectively borne by the customer and not by the company. Imperial’s adjusted tobacco margin on that basis is a fantastic 46%.

Note that Imperial also operates a Distribution division. Although revenue here includes the gross value of the products sold, the fees paid by the customers reflect the division’s true sales. Imperial claimed the adjusted Distribution margin was 21% for 2018.

Imperial referred to “adjusted” operating margin within that accounting note above, and the word “adjusted” in an annual report should always prompt further investigation.

Sure enough, SharePad reveals significant differences between the group’s reported and company-adjusted earnings:

Back to the annual report, and this note explains the adjustments:

All of the adjustments seem fair apart from the restructuring costs. The annual report says:

“Our five-year cost optimisation programme announced in January 2013 has delivered savings of £300 million per annum from September 2018 at a cash restructuring cost of around £600 million.

The additional cost programme we announced in November 2016, is expected to deliver a further £300 million of annual savings from September 2020, at a cash restructuring cost in the region of £750 million.”

Imperial appears to operate in a perpetual state of restructuring — such charges have been raised for the last eleven years.

Cumulative restructuring costs since 2008 come to £2.6 billion — equivalent to 8% of the £32 billion aggregate adjusted operating profit reported during the same time. 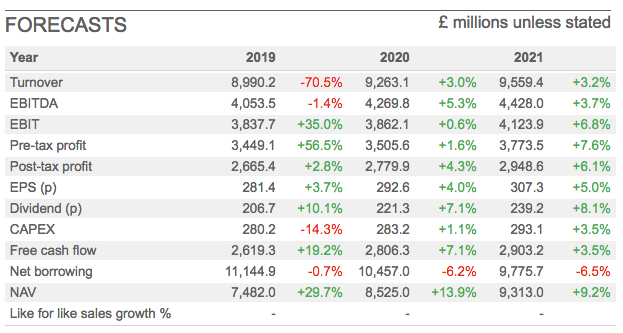 The apparent 71% turnover collapse is nothing to worry about. The £9 billion SharePad estimate excludes government duties and gross distribution sales, and suggests Imperial’s net revenue will advance 3% during 2019.

Meanwhile, the hefty 35% and 57% estimated profit improvements arise through a mismatch between how brokers and SharePad treat all those adjustments.

At least the predictions of a 4% EPS advance and 10% dividend advance do not require any interpretation.

The City’s forecasts reflect Imperial’s own guidance. Management has claimed earnings could grow between 4% and 8% a year — and significantly, the dividend could advance by 10% a year — “over the medium term”.

Half-year results issued during May showed net revenue up 4%, adjusted earnings up 1% and the dividend up 10%.

Imperial reckons revenue from its ‘next generation’ devices could surge towards £1.5 billion by 2020…

…and that the associated margin on such devices may one day reach 40%. 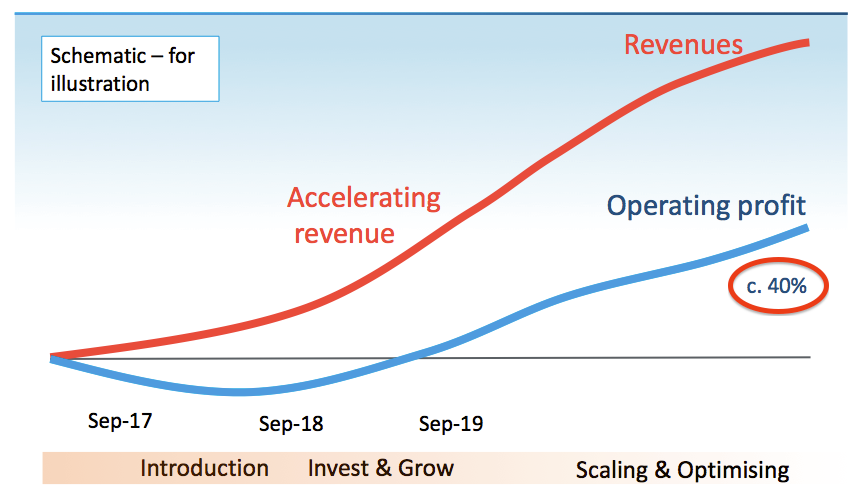 However, Imperial’s upbeat e-cigarette projections may not have factored in increasing regulation in the States. The group recently admitted such sales in the US has “slowed” following statements from the Food and Drug Administration.

Since then, the FDA has announced tougher rules for selling the new devices.

Yes, Imperial’s dividend cover is low, the group’s debts are large and returns on capital are not spectacular.

However, nothing from the SharePad numbers suggests the dividend is about to be chopped or the business is about to go under.

I can only presume the 10% dividend yield reflects wider industry worries.

Perhaps of more concern is Imperial being ‘disrupted’ by alternative products as industry regulations tighten.

Terry Smith’s favoured Philip Morris is going all out to replace its cigarettes:

“We are dedicated to doing something very dramatic — we want to replace cigarettes with smoke-free products as fast as possible.

That’s why we have more than 400 scientists, engineers, and technicians developing less harmful alternatives to cigarettes at our two research facilities in Switzerland and Singapore.

It’s the biggest shift in our history. And it’s the right one for our consumers, our company, our shareholders, and society.”

In contrast, Imperial’s approach is not quite so clear:

“As millions of smokers around the world continue to choose less harmful Next Generation Products (NGP), we’re increasingly focusing our attention on developing and expanding our NGP portfolio.

We want smokers to switch to alternative products with lower health risks. Our Fontem Ventures subsidiary continues to prioritise vapour, and we are represented in this category by the pioneering vapour brand, blu. As more and more consumers quit smoking through vaping, NGP will become an increasingly material part of our business.” 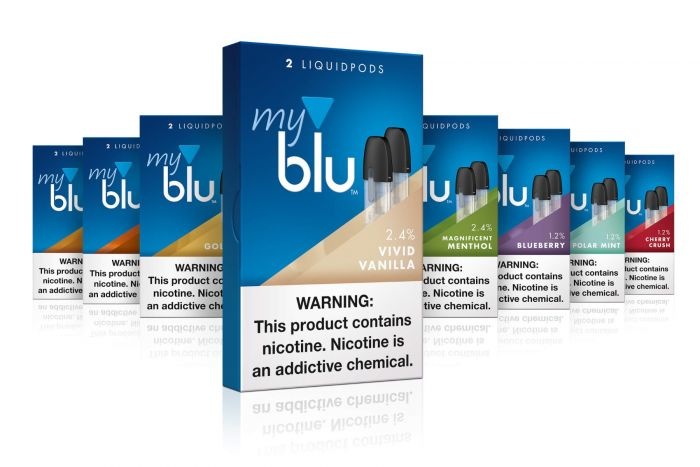 Just how successful Imperial’s e-cigarettes will become — and whether they can replicate the profits of traditional cigarettes — is hard to judge.

Mind you, that 10% yield must already price in a lot of new-product upheaval.

Let me finish by admitting that I admire Imperial’s current shareholders for their resolute contrarianism.

Owning a disliked, declining, disruptable and ‘deep value’ business cannot be easy in a market that remains besotted by dependable ‘quality’ growth stocks.

Still, Imperial’s shareholders have been here before. They were completely out of touch during the manic tech boom of early 2000 — and their contrarianism back then eventually paid off.

Disclosure: Maynard does not own shares in Imperial Brands.