Richard considers whether the supplier of educational resources and software services can sustain profitability and reignite growth. There’s a good chance, he thinks, which makes RM an intriguing proposition at its current valuation.

In my last article, we took a tour through SharePad and RM’s annual report to check its profit was real. RM is a supplier of educational materials. Its profits are pretty real and real enough to make further investigation worthwhile.

RM may be profitable now, but it is the future that matters. When we buy shares for the long-term, we need the business to keep earning good returns so it can pay dividends and grow. That earns us an income and a capital return when we sell the shares, hopefully in the distant future for oodles of money.

To gain confidence in the future, we can look at where RM has come from, and what it says about where it is going. But first we need to know what it does, and our entry into understanding that is the acquisition it made in 2017.

Could this acquisition be a game changer?

We already know that last year RM paid £2.6m to lawyers and advisers for services related to an acquisition in 2017, because the company excluded this amount from its preferred measure of profit. The cost of the advice is our first hint the acquisition was big.

Big acquisitions can completely change the direction of a business so before we look at the past, we need to make sure the company has not been “transformed”. If it has, there may not be much point in studying its past.

We should also check whether RM has made other acquisitions that could have transformed it. The easiest way to do both, is in SharePad: 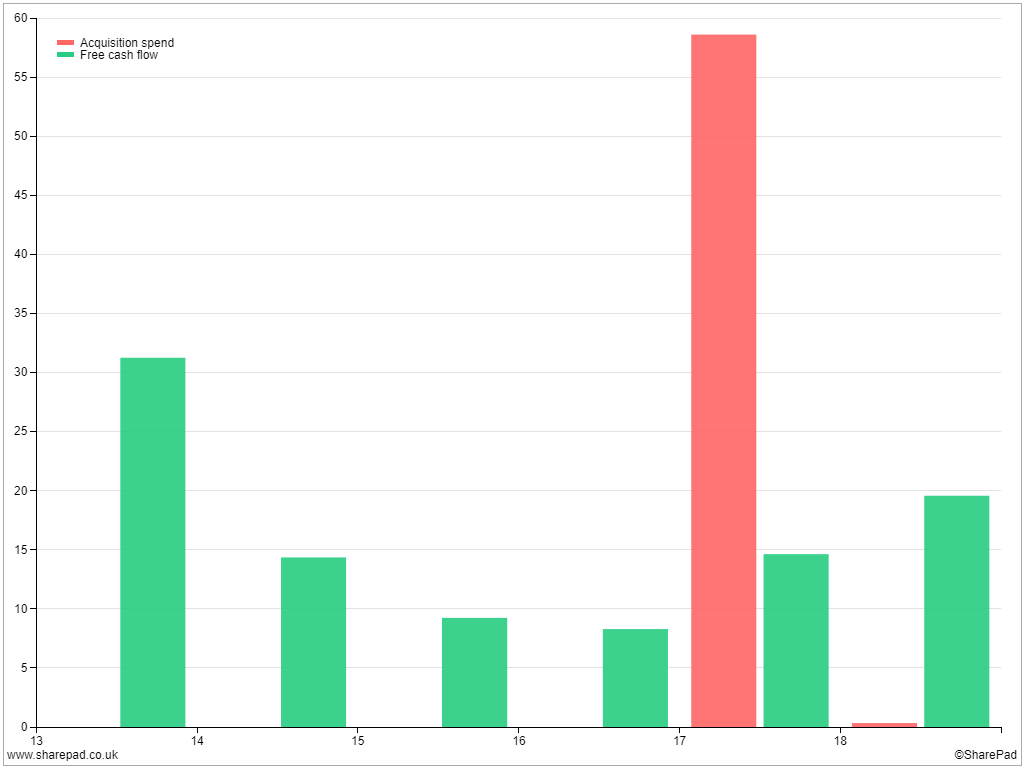 This chart compares the cash spent on acquisitions to free cash flow, the amount the company has left over after the cash cost of running the business, capital expenditure to maintain and grow it, and tax. Free cash flow can be used for a number of things including acquiring other businesses, paying off debt, or returning money to shareholders. In this case, RM has decided to spend the equivalent of between four and five years of free cash flow on the acquisition of Consortium in 2017. It is a lot of money, but at least it was the company’s only acquisition in the period.

RM has probably not been transformed. It has acquired another supplier of education resources. The combination of Consortium and TTS, RM’s existing supplier of educational resources, sells 50,000 products, from furniture to footballs. The note discloses that had Consortium been owned by RM for the whole of 2017, it would have contributed £58.8m to turnover. In comparison, RM Resources (Consortium and TTS) earned £122m of revenue, so by a small margin Consortium was the smaller of the two educational resources businesses. RM has two other divisions as well. In total it earned £220m of revenue.

It is a big acquisition, but it is not a game changer. The rationale for Consortium, explained in note 19 was to increase the scale of the existing resources business, by increasing the range of products it sells and the number of customers it sells to, and enable the two businesses to share costs and operate more efficiently. Perhaps the restructuring disclosed in the adjustments to profit will help bring this about. If all goes to plan the two businesses should earn more turnover than they did separately, and incur lower costs. One way it plans to do that is to bring TTS’ two distribution centres together with Consortium’s three into one single automated distribution site. They should earn more profit together, than they did apart.

What does RM actually do?

RM Resources is the biggest division. In 2018, it earned £122m again according to SharePad, which was nearly 66% of turnover: 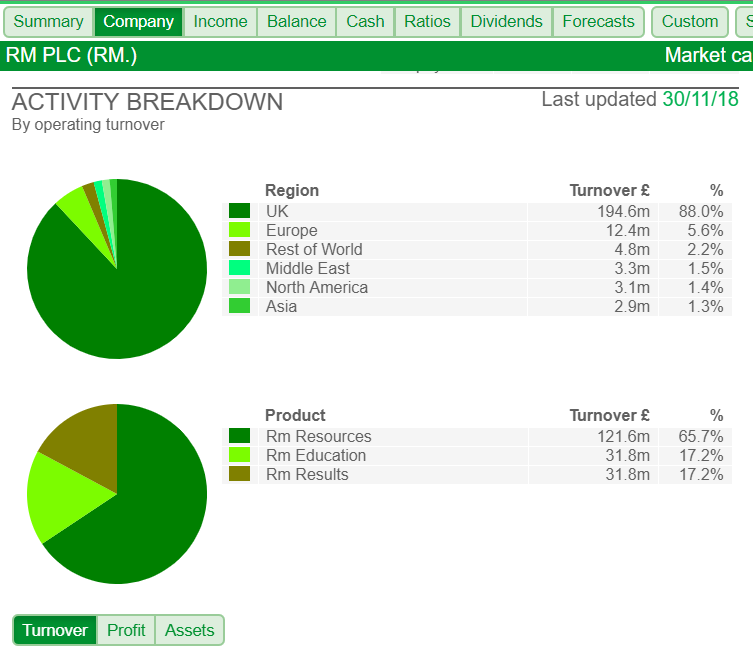 To see the impact of the acquisition of Consortium, we need to go back in time, Our portal into the past is the note on ‘Operating segments’ in previous annual reports (Note 4 in 2018), which tell us the revenue and profit of each division. 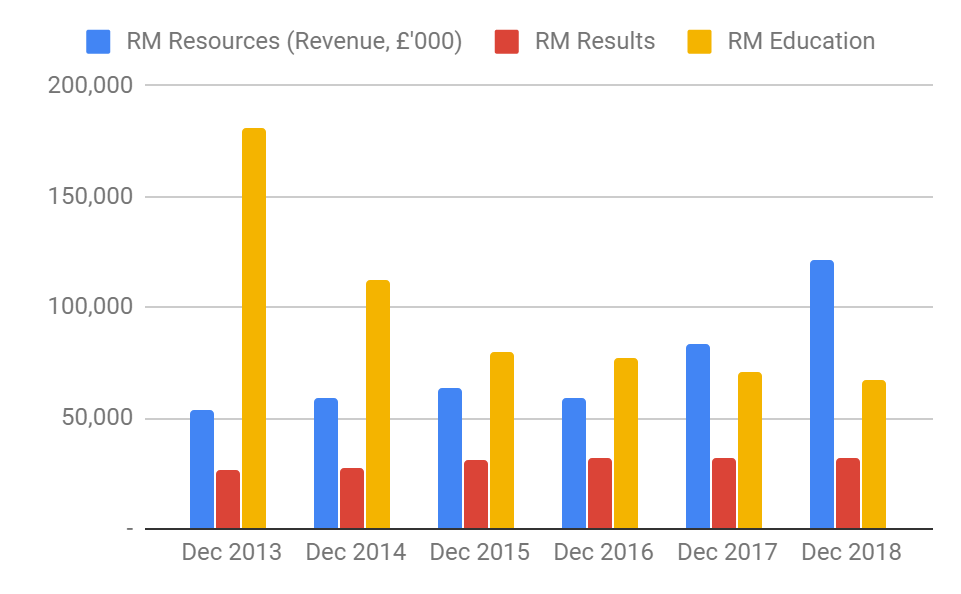 In terms of revenue, RM Resources’ growth (blue bars) is almost entirely the result of the acquisition in 2017. The stunning revelation in this chart is the contraction of RM Education (yellow bars). Once this division, which supplies IT to schools, was the biggest. The third division, RM Results (red bars), is the only stable looking aspect of the chart. It earned about 20% more revenue in 2018 than it did in 2013. RM Results provides software as a service: RM Assessor, described on its website as “the world’s most widely used and innovative high stakes e-marking platform.” Basically, it allows markers to mark scripts on screen, which is faster, more efficient and less error-prone than posting papers to and from markers.

RM is a lot more interesting than it first looked, particularly when we look at what has happened to the adjusted profit margins of each division. This chart is also derived from RM’s segmental reports, and does not include significant head office costs: 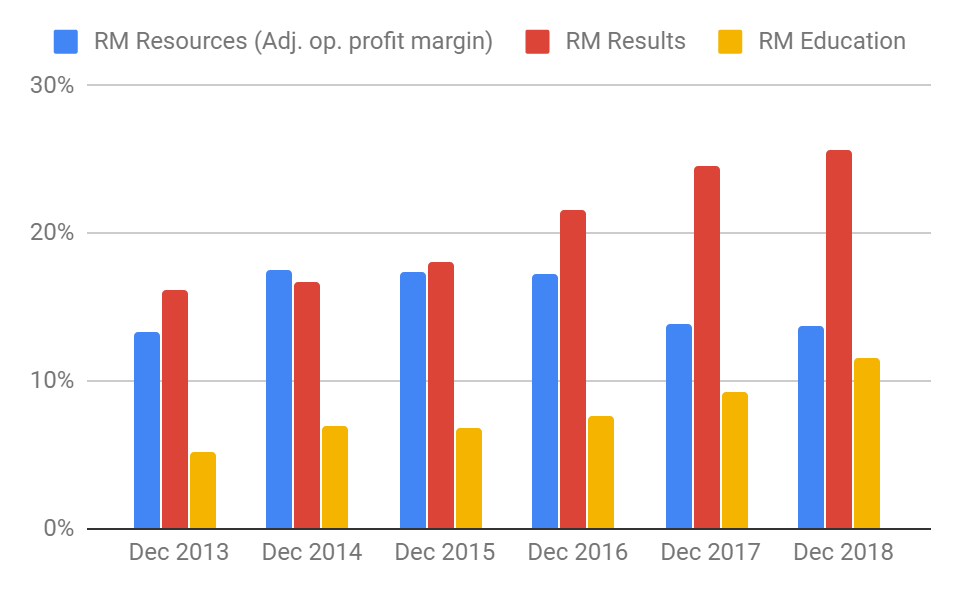 Profit margins at RM Resources have declined (blue bars) as a result of the acquisition. RM says Consortium was a less profitable business than TTS, and the expected synergies of combining the two businesses have not yet made up for this. As well as building economies of scale, RM’s strategy is increasing investment in product development. 40% of TTS turnover is earned from products developed by the firm. Hopefully, in time RM will be able to lift profit margins.

RM Results (red bars) is a really profitable business and profit margins have improved consistently since 2013. The business earns almost half as much profit as RM Resources despite earning little more than a quarter of the revenue. It may well be a market leader in a lucrative niche. RM says it can use the data it has collected from many examination cycles to help customers manage their marking schedules as well as speed up the process of marking. It is also using artificial intelligence to mark one-word handwritten answers with little or no human intervention. E-marking is readily exportable, and RM says it signed six new international contracts with an order book value of £4m in 2018.

Perhaps the most surprising performance is that of RM Education. When revenue was high, profit margins were low at 5%. Although revenue has fallen by two-thirds, profit margins have improved to 11%. RM Education has lost a lot of businesses, but it was not particularly valuable business. Today RM is focusing on learning, teaching and administrative software as a service, reducing costs for schools and giving RM a regular income.

RM has been through a transformation, but it was not by acquisition. It put its own house in order before buying Consortium. Today, the company appears to be a combination of two good businesses and one very good one. Management has played what was probably quite a poor hand, due to cuts in school funding and heightened competition from general suppliers of hardware and software, rather well.

That is intriguing because RM’s recovery coincides with the tenure of David Brooks as chief executive, an RM lifer who joined on a graduate trainee scheme and ascended to the top job in March 2013.

Perhaps from here RM can reignite revenue growth. It would appear to have opportunities, particularly in e-marking. In a sense, it does not matter. Even if RM were to sustain profit rather than increase it, it could still be a good investment. According to SharePad, RM’s debt-adjusted PE ratio is nearly 10%. In theory, RM could return all profit to shareholders as a dividend, and give shareholders a 10% annual return.