Screening For My Next Long-Term Winner: Apple 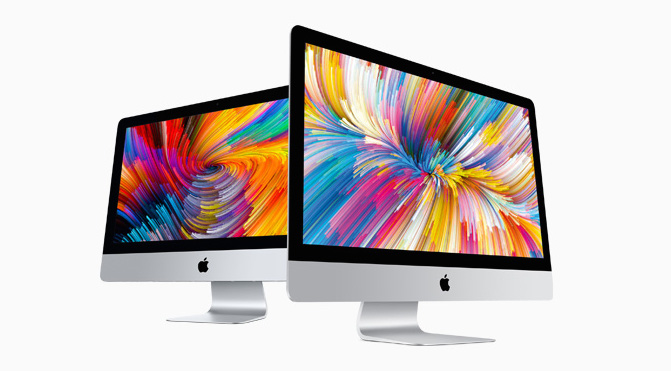 Being able to analyse international shares — at no extra cost! — is a wonderful feature of SharePad.

And finding overseas shares within SharePad is easy, too. Simply click on Other Lists within the main toolbar…

…and take your pick from the various US and European indices available. I have chosen the top 500 US shares: 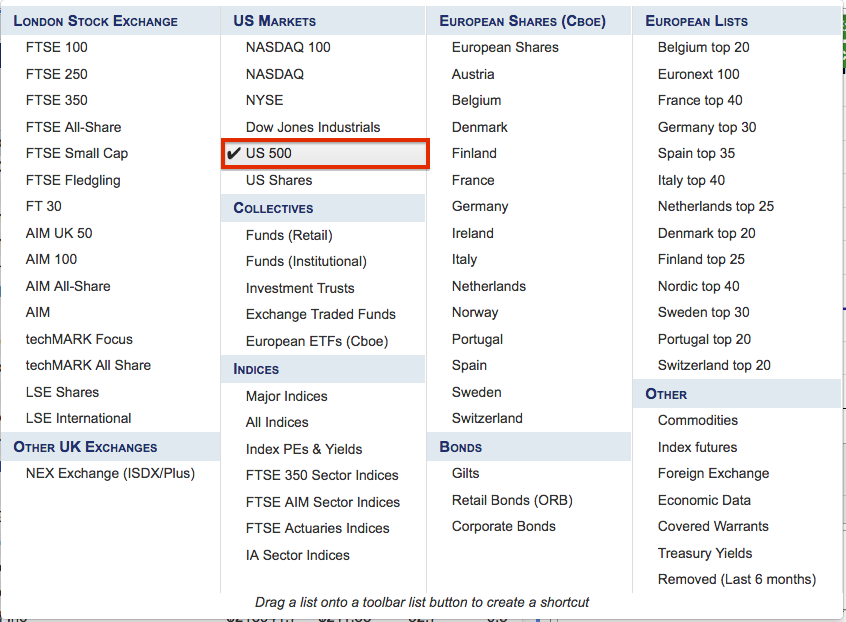 Sorting by market cap gives me the following: 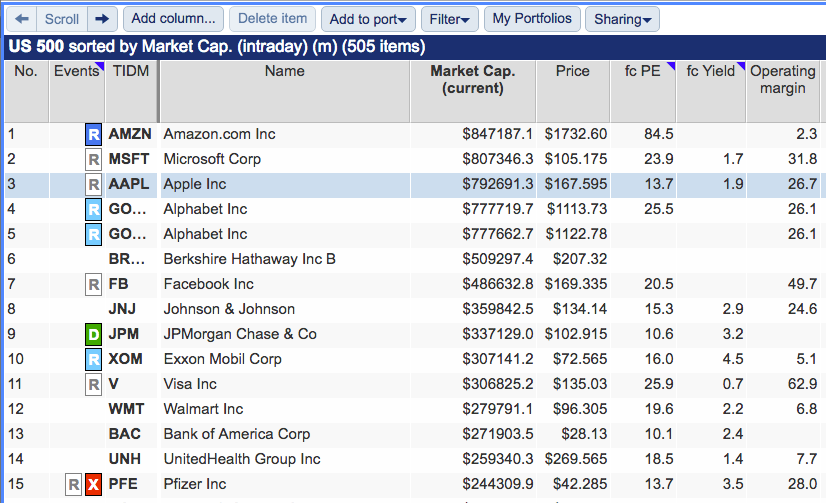 Some familiar names there.

For this article I am not screening any further — Apple (Nasdaq: AAPL) strikes me as worthy of further investigation.

I am going for Apple because:

3) I own three Apple devices.

When the world’s richest investor buys a share, finding out why can often pay off.

At that point, Apple was the second-largest quoted shareholding of Mr Buffett’s Berkshire Hathaway investment vehicle: 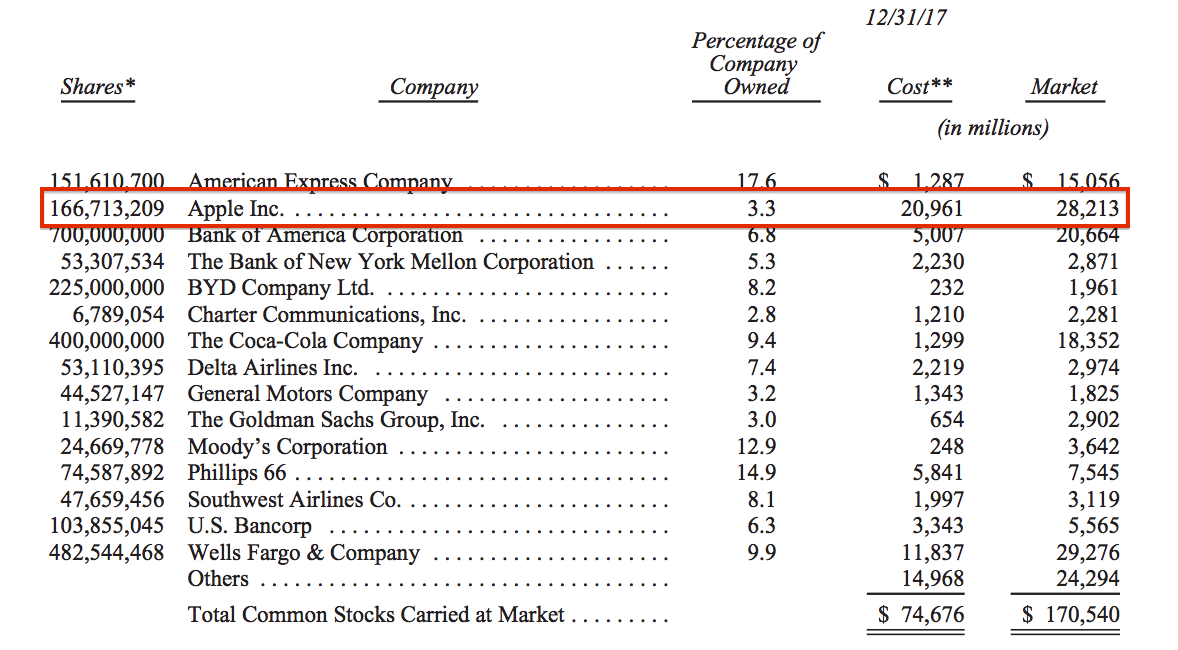 At the end of September last year, Mr Buffett’s Berkshire Hathaway owned 255 million shares with a then value of $58bn. At the time the investment represented 8% of Berkshire’s assets.

After claiming for years he could not understand the competitive advantages of technology companies… why then did Mr Buffett buy Apple?

He spoke to CNBC last year and revealed some clues.

Mr Buffett commented about the iPhone:

“You have hundreds and hundreds of millions of people with loads of buying power, and able to do business or learn information or whatever it may be, and [the iPhone] is part of their habit of living. They spend hours a day [using it] and it does all kinds of things for them, so that ‘real estate’ is worth a fortune…

“[The iPhone] is an indispensable part of their lives. It is an extraordinary product.”

“I have a plane that costs me a million dollars a year… If I use the iPhone like all of my friends do, I would rather give up the plane…for something that costs a thousand bucks. The iPhone is enormously underpriced.”

“I have felt that Apple has an extraordinary consumer franchise… It’s the consumer behaviour with the product — what they do with it, how it becomes part of their lives and all that sort of thing — that I observe and primarily reason from.”

“You are very, very, very locked in — at least psychologically and mentally — to the product you’re using. It’s a very sticky product.”

“I think I understand consumer behaviour perhaps better than I do the [wider] tech industry. And it’s an incredible ecosystem that [Apple has] found ways to profit more from.”

Apple was established during 1976 when Steve Wozniak and Steve Jobs started building and selling computers from a family garage in California.

Mr Wozniak produced the first computer that could connect to both a keyboard and a television. Mr Jobs then won an order for 50 of these ‘Apple I’ circuit boards without having the money to buy any components: 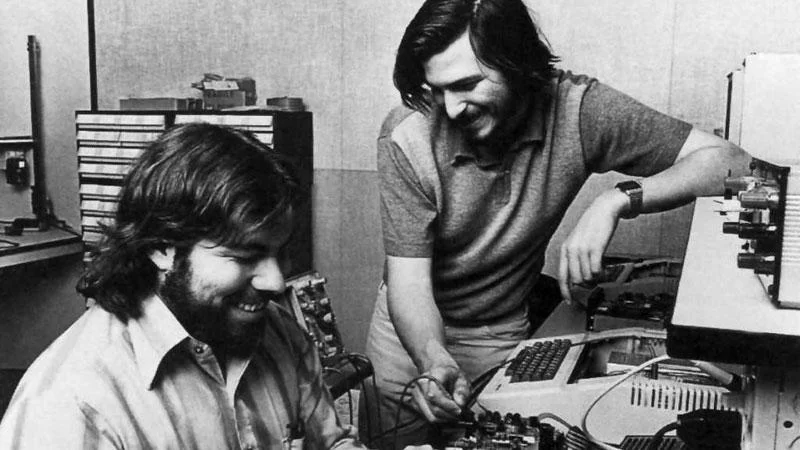 The subsequent 43 years is the stuff of business legend. Notable company events include:

* the launch of the Macintosh, the first personal computer with a mouse, graphical user interface and built-in screen (1984); 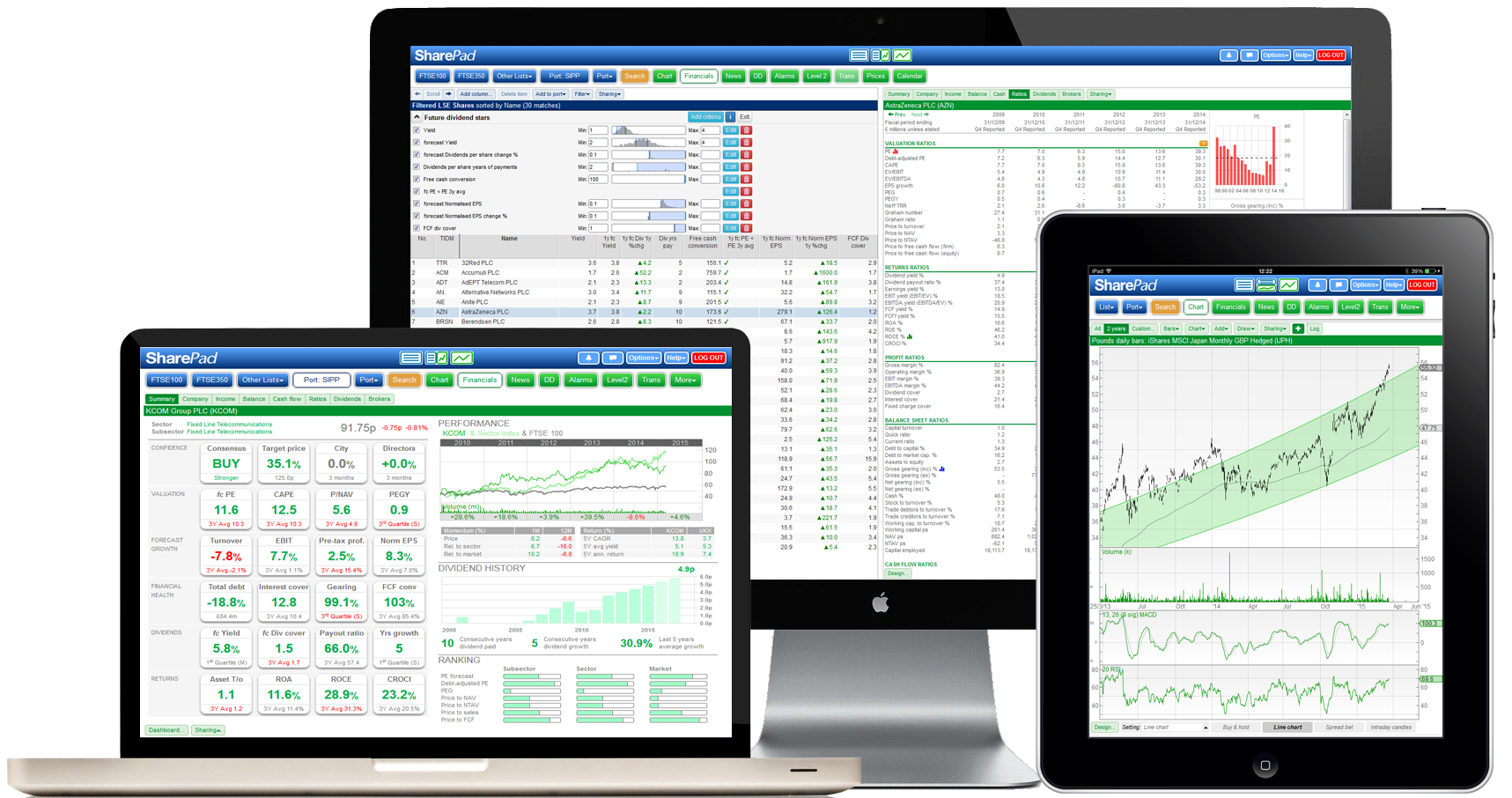 Apple floated during 1980 and SharePad’s comprehensive database shows the company produced revenue of $335m and earnings of $39m the following year. 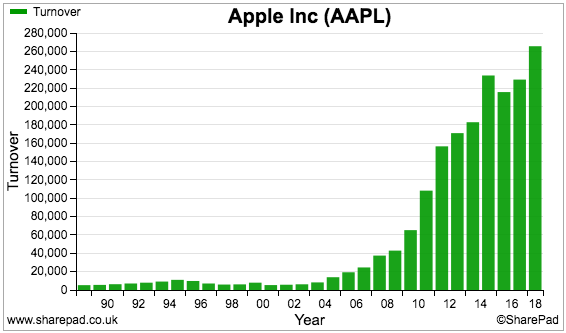 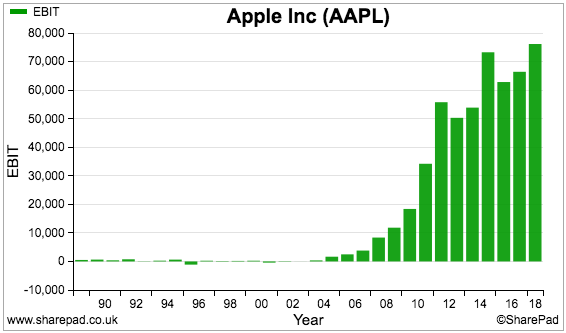 You can see how the business really took off from 2004 onwards.

The share price has followed revenue and profit higher: 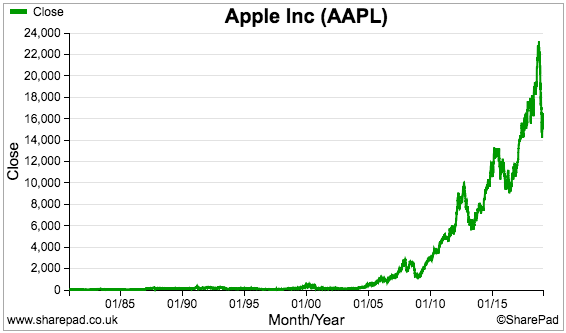 That tiny bump at the 01/00 mark represents the dotcom boom and bust. The surge from $1 to $5 and collapse back to $1 is now a quaint footnote in Apple’s history.

The average iPhone sells for $766

My chart below shows how dominant sales of iPhones are to Apple’s top line: 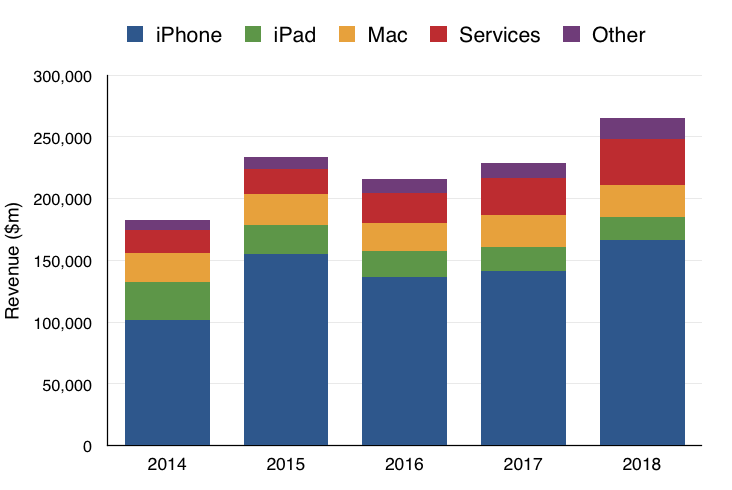 Last year, 63% of revenue was earned through iPhones.

Following a strong 2015, the number of sold iPhones, iPads and Macs has stabilised at approximately 217 million, 44 million and 19 million respectively. 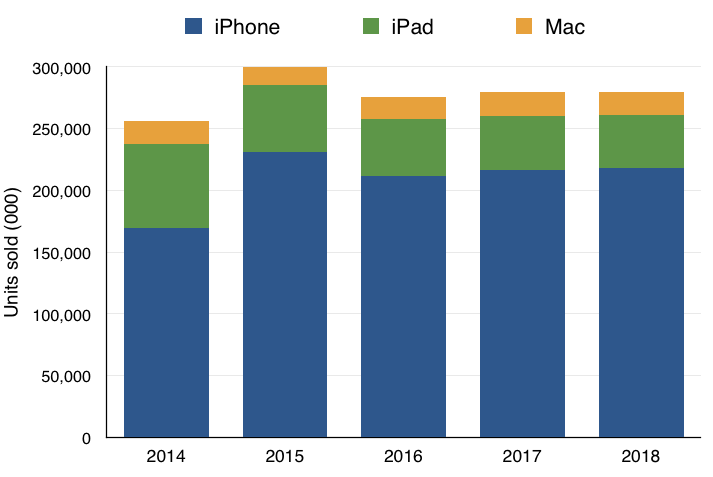 The average revenue per device sold is shown below: 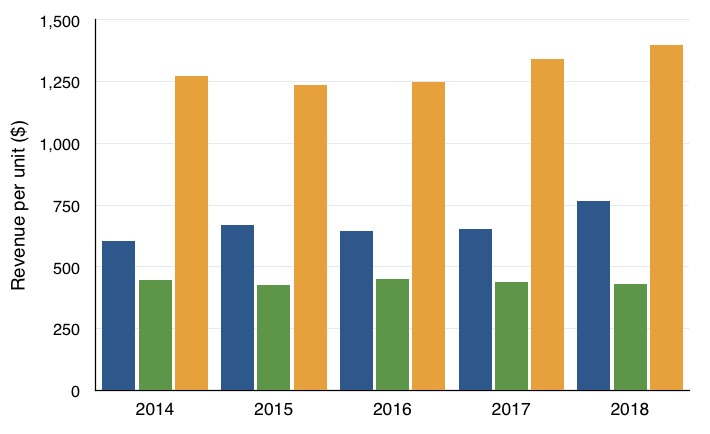 Apple’s first-quarter results issued the other week were the first to omit the number of devices sold.

The company decided to withhold such information because “the number of units sold in any 90-day period is not necessarily representative of the underlying strength of our business.”

Apple also claimed: “A unit of sale is less relevant for us today than it was in the past given the breadth of our portfolio and the wider sales price dispersion within any given product line.”

The absence of such unit sales information is slightly concerning. After all, as companies become larger they should disclose more information and not less.

I suppose the reduced device disclosure is telling investors to place greater emphasis on Apple’s Services division, income from which is mostly recurring.

Apple has declared its ambition to double the $24 billion Services revenue achieved during 2016 by 2020. The division’s trajectory appears on track — revenue between 2014 and 2018 doubled to $37 billion.

I should add that Apple’s main smartphone and tablet rivals do not provide quarterly unit sales information.

The disclosure change comes at a wobbly time for Apple.

The company warned on its progress at the start of January, with slower sales in China cited for a first-quarter revenue and earnings shortfall:

“While we anticipated some challenges in key emerging markets, we did not foresee the magnitude of the economic deceleration, particularly in Greater China. In fact, most of our revenue shortfall to our guidance, and over 100 percent of our year-over-year worldwide revenue decline, occurred in Greater China across iPhone, Mac and iPad.”

Revenue of $91 billion and an operating profit of $26 billion had been expected for the three months to December 2018.

In the event, first-quarter revenue and operating profit came in at $84 billion and $23 billion respectively.

Apple’s guidance for the second-quarter was not sparkling:

The mid-point implies revenue of $57 billion and an operating profit of $12.7 billion. Those figures are 7% and 20% lower than the comparable numbers of 2018.

The second line on SharePad’s Summary tab reflects the difficult year ahead, although the forecast for earnings per share (EPS) is positive (just): 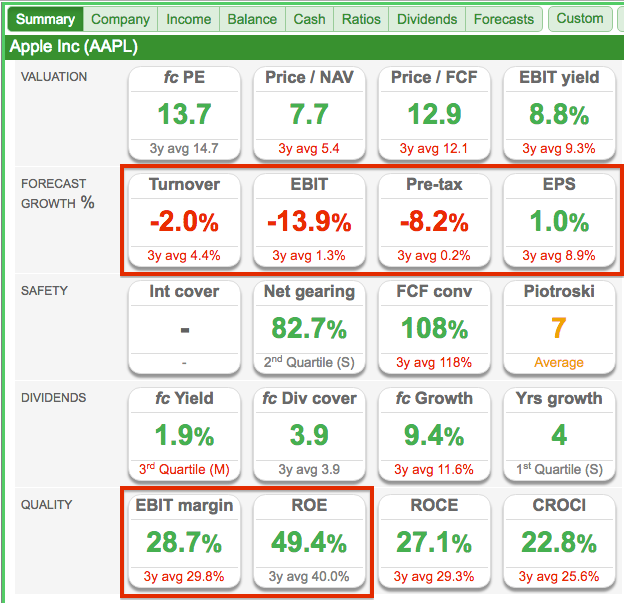 Also of note are the strong margin and return on equity numbers on the bottom line.

Let’s look at the forecasts: 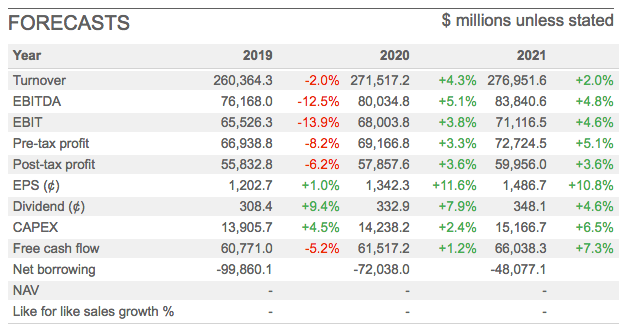 Assuming Apple meets its second-quarter guidance, the 2019 estimates suggest the second-half of the year will see revenue and profit stagnate at $119 billion and $29 billion respectively.

The greater EPS improvements are worth investigating. This chart explains what is happening: 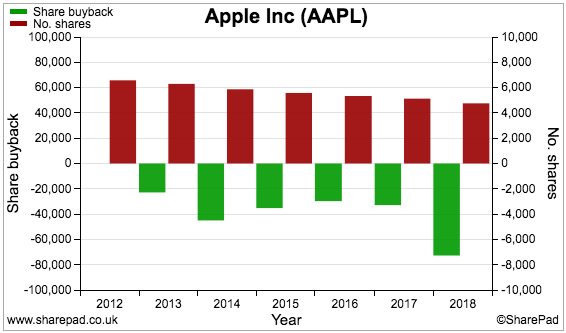 Apple commenced a buyback programme during 2013 and has since spent a staggering $246 billion repurchasing its own shares. The share count during that time has reduced by 28%, the effect of which boosts EPS even if absolute profit remains flat.

The buybacks have been funded by a mix of strong cash flows and greater debt.

This next chart shows Apple’s cash, marketable securities and investments climbing higher, with debt taken on since 2013: 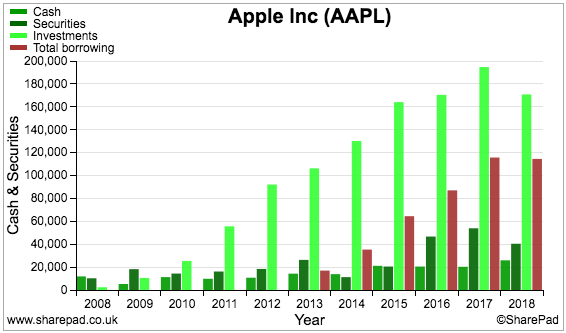 Although some ‘financial engineering’ may be taking place with debt-funded buybacks, the size of the debt does not look problematic. The 2018 accounts showed cash and various investments of $237 billion versus total borrowings of $114 billion: 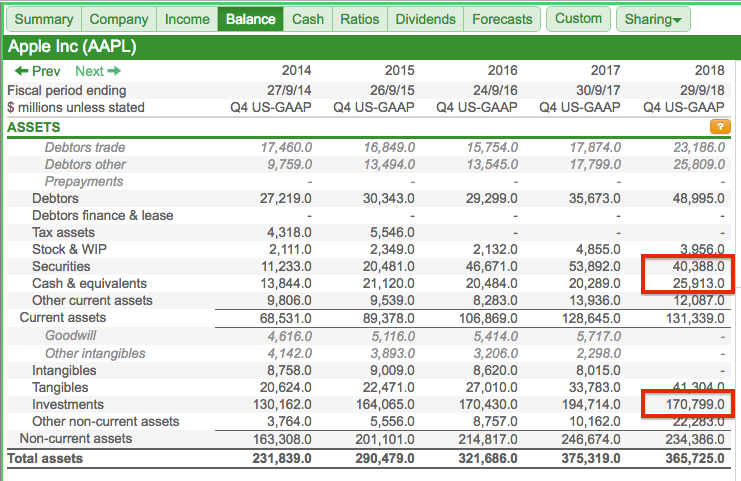 Apple also collects more interest and dividends from its cash and investments than is paid out as interest on its loans: 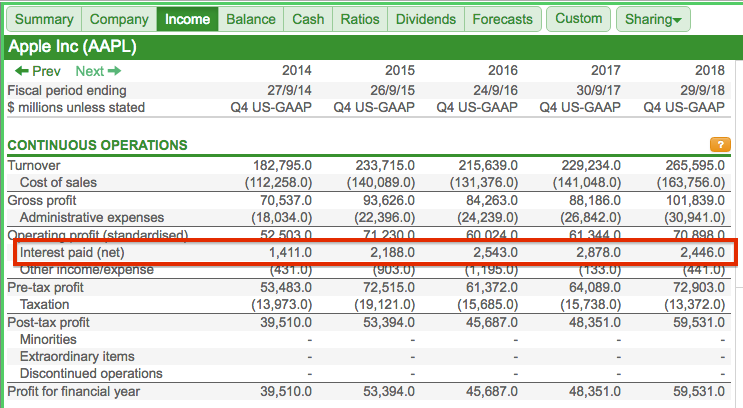 A consistent 25%-plus operating margin and a consistent 30%-plus ROE underline Mr Buffett’s claim that Apple enjoys an “extraordinary consumer franchise”: 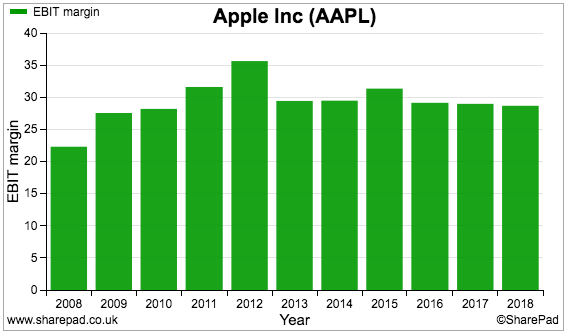 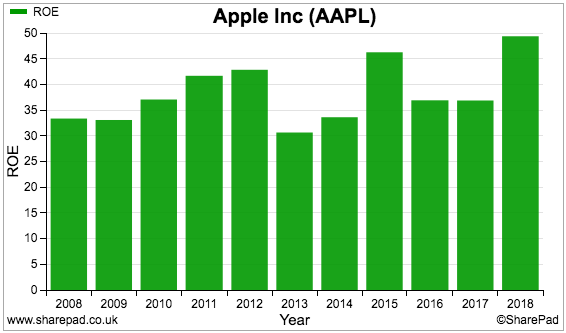 A good omen perhaps for future growth is the company’s R&D expenditure, which has increased as a proportion of turnover: 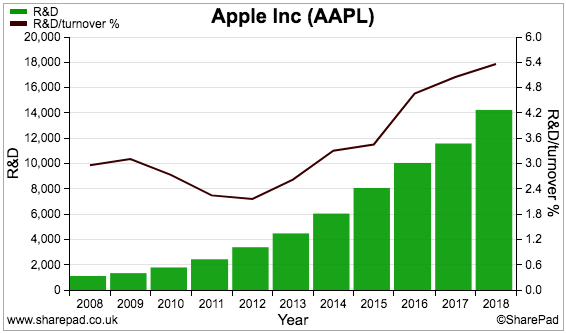 Note that Apple prudently expenses its entire R&D — no such costs are diverted to the balance sheet to flatter earnings.

Elsewhere, acquisitions and purchases of third-party ‘intangibles’ have been minimal when compared to the group’s net asset value: 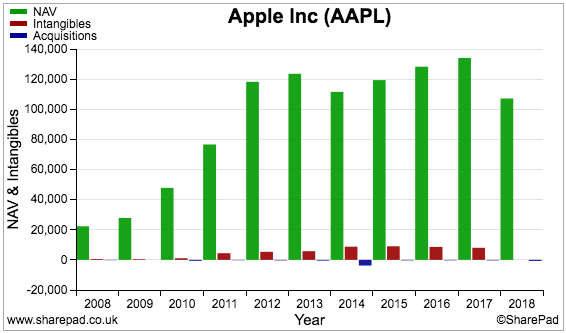 Apple’s staff productivity is impressive. The business has regularly produced sales of $2 million for every employee: 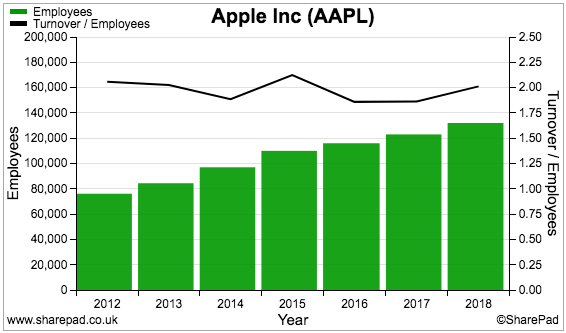 Such high sales per employee tell me Apple’s products are quite special.

Are the products special enough to sustain the ‘upgrade cycle’?

Could Apple’s rapid expansion grind to a halt because its iPhones and iPads are now so sophisticated, they no longer need upgrading as often?

Somebody asked this question (sort of) on Apple’s latest analyst call:

“Maybe you can help us understand what the iPhone’s average replacement cycle might be today, and how that may have changed over the last three to five years.”

“We do design our products to last as long as possible. Some people hold onto those for the life of the product. And some people trade them in. And then that phone is then redistributed to someone else.

The upgrade cycle has extended. There’s no doubt about that. We’ve said several times on this call and before that the upgrades for the quarter were less than we anticipated…

Where it goes in the future, I don’t know. But I’m convinced that making a great product that is high quality is the best thing for the customer. And we work for the user. That’s the way that we look at it.”

So there you go. The company builds products to last and aims to create consumer loyalty by doing so.

I am a good example of that loyalty. My Apple collection involves:

The devices have never caused any problems and I therefore have never considered buying any replacements. But when the time comes to upgrade, I will remain with Apple…

Why? Because everything just works… and easily synchronises together with features such as AirDrop.

From what I can tell from other family members, buying cheaper alternative tech has often proved to be a frustrating false economy in the longer run.

If you like US shares, Apple has many attractions

A high-margin, cash-flush global super-brand is not often valued at less than 14 times possible earnings.

And yet Apple seemingly offers that opportunity right now: 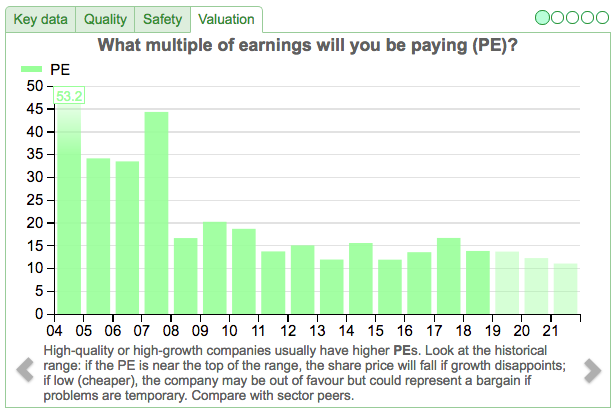 Adjust for the net cash and investments, and the P/E might even be less than 13. There is a dividend, too (although as with any overseas share, an extra withholding tax may apply to UK investors): 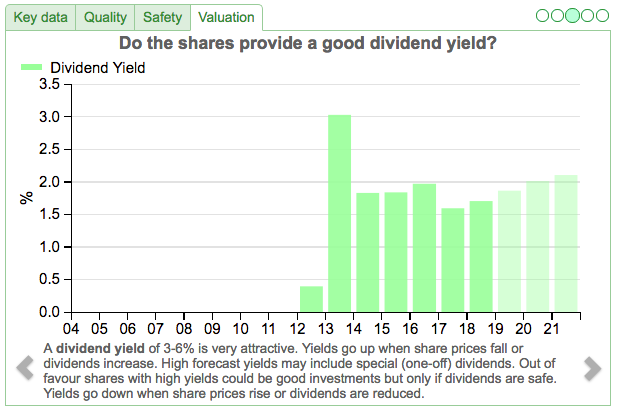 The downsides to Apple?

Well, what is the next iPhone or iPad?

Apple’s recent progress has been driven largely by redeveloping those two main products — and what (if anything) will become the next mega money-spinner is not really clear.

Could the Apple Watch take off? You tell me.

While I can’t really fault Mr Cook’s leadership since 2011, I just get the impression Apple created a greater number of ground-breaking devices when Steve Jobs was in charge.

That impression could be why Apple shares traded on a P/E of 12 a few years ago. A more decisive share-price re-rating may not occur until Apple develops the next big winner and/or enjoys much greater recurring Services income.

Oh, and something else to bear in mind: Mr Buffett’s record with tech shares is not great.

Remember IBM? The Berkshire Hathaway boss spent $11 billion buying IBM shares during 2011, then held them for six years — and just about broke even before selling out.

I can’t be certain, but I do get the feeling Apple might provide Mr Buffett a better return than IBM.

Disclosure: Maynard does not own shares in Apple.

[SharePad] Screening For My Next Long-Term Winner: Curtis Banks #CBP

"I do not think future growth has to be superb for the shares to stand a fair chance of outperforming the higher-rated Hargreaves Lansdown and AJ Bell."