A new issue that is already a winner

Looking through the prisms of profitability, debt, cash flow, strategy and valuation, Strix may be an exception to the rule that new issues make bad investments.

Finance professor Elroy Dimson and his colleagues made a startling find when they studied the long term returns of UK Initial Public Offerings between 1980 and 2014. The longer it had been since a company floated on the stock market, the more the shares returned. Those that had been listed for 20 years or more earned the highest returns over the 35 years of the study. And those that had been listed less than two years, returned least. Generally, it’s a bad idea to buy shares in new issues because they’re often unproven businesses in fashionable industries.

But there are exceptions to any rule and I’m wondering if Strix is one of those exceptions.

Strix floated last August, but its history goes back to 1951, when Eric Taylor founded a company called Castletown Thermostats. Taylor had invented a thermostat used to control the heated flying suits worn by bomber crews at high altitude during the second world war. His son, John, changed the company’s name to Strix in 1982, and later in the 1980s it became market leader in kettle controls, a position it maintains today with a 38% share of the global market and a 61% share in what it calls Regulated Markets (those with high safety and Intellectual Property standards like Western Europe and the USA). In 2005, Strix launched the Aqua Optima water filter brand, a spin-off from a project to develop a fast filter kettle. In 2017, Strix sold its two billionth product and its products are used a billion times a day by over 10% of the world’s population. While Strix is a new issue, it’s not a flash in the pan.

Strix’s core product is the safety control that disconnects the power from the heating element when a kettle boils. It sold 74m of them in 2017, 3.5% more than in 2016.

I like the back story. The company is the market leader by a long way and the development of new generations of thermostatic controls and Aqua Optima is evidence it is still innovating. Strix says it has other technologies and products up its sleeve including a turbo-toaster that is three times faster than a conventional toaster.

It seems reasonable to expect more people to use kettles if the world keeps growing more prosperous and for Strix to find new niches to grow in.

Strix was reorganised before flotation and as part of that process money owed by its previous owners was written off, massively reducing the amount of capital recognised in the firm’s balance sheet.

The assets (and some liabilities) written off in the reorganisation will not feature in Strix’s accounts again so to calculate operating capital for the year ending December 2017, I’ve ignored them. On that basis, Strix is highly profitable. Profit (EBIT – Earnings Before Interest and Tax) was just over £26m and operating capital was just under £25m. You don’t need a calculator to see return on capital (profit expressed as a percentage of capital) was around 100%, which is incredibly high.

That’s almost certainly because Strix has capital that simply isn’t counted by accountants, or if it is, it’s not recognised at anything like its true value. Strix has 150 patents, decades of technical, marketing and manufacturing expertise, and collaborative relationships with kettle manufacturers and retailers, for example.

High profitability corroborates the back story. It’s an established, successful, business. But there’s a fly in the ointment: debt.

At its year end in December 2017, Strix had £56m in borrowings, or just under £46m if you subtract the cash it owned. Net debt was about two times operating capital, or to put it another way the company owed the bank more than two times as much money as it actually needs to operate.

I normally consider such inordinate indebtedness to be a sign of failure. Good businesses can finance their own operations, they don’t need to go elsewhere. Strix’s debt was manufactured during the flotation, though. It is not a blight on the company, but the price extracted by its previous owners, private equity firm AAC Capital, who took capital out of the businesses before selling it.

Debt might not be the deal-breaker that it normally would be because of its relationship with cashflow. 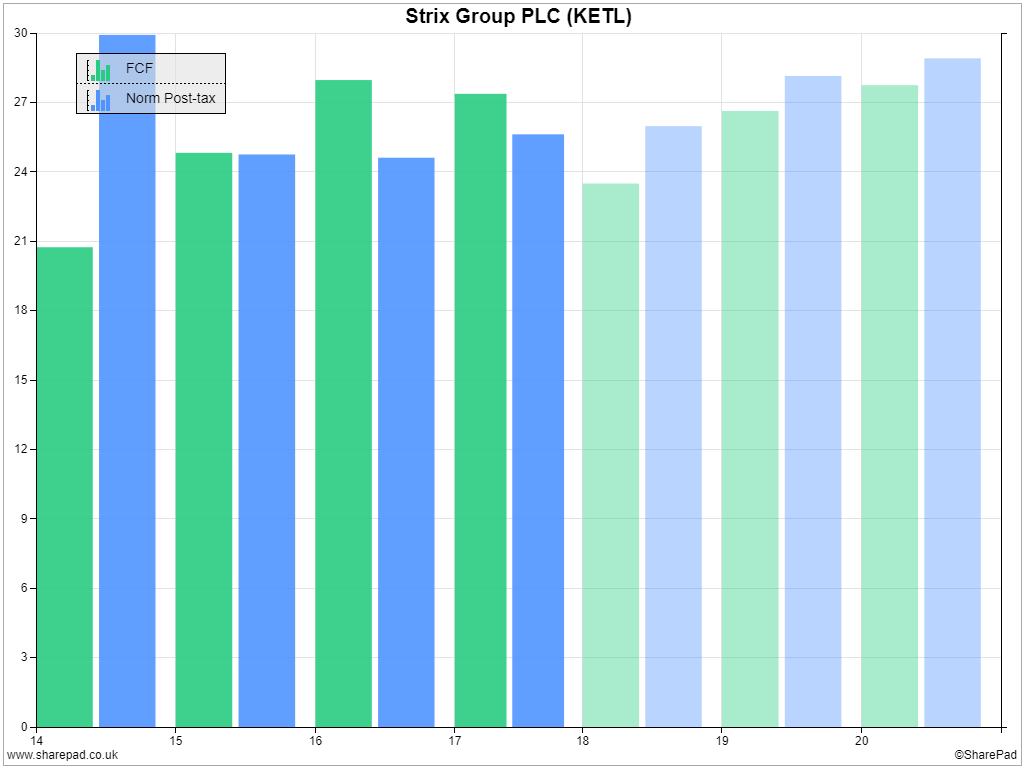 The chart above is from SharePad. It shows that in recent times Strix has earned about as much in cash terms (Free Cash Flow – green bars) as it has in accounting terms (Post-tax profit – blue bars), which is very reassuring. It also shows that Strix’s broker, Zeus Capital, forecasts cash flows will remain strong.

The slight weakness in profit and cash flow in the current financial year (2018) is probably due to the interest on the debt created when it floated. The broker must think the company’s performance will improve as it grows and pays less interest, because, as we can see in the chart below, it expects Strix to reduce its net debt dramatically over the next three years. 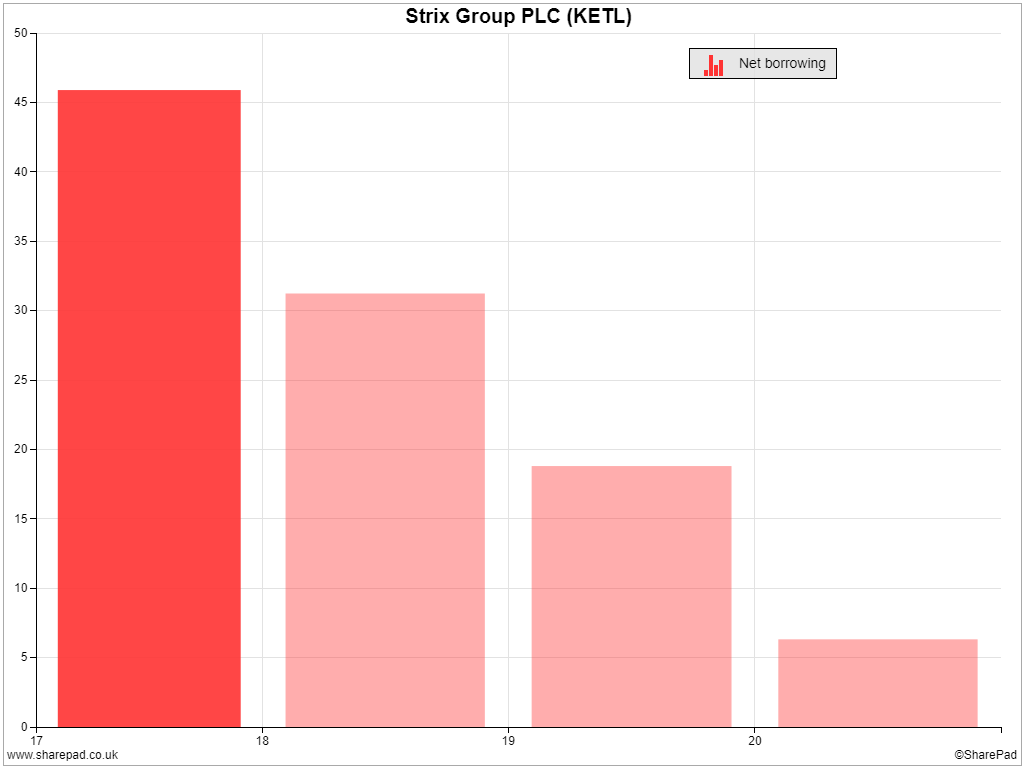 The early signs are good. In less than five months between the flotation in August and the year end in December, net debt fell by more than £12.5m to £45.9m. Strix says it will keep falling in 2018, and that it will use surplus cash to make debt repayments.

Dividends must also be paid out of free cash flow though. Strix is committed to increasing the dividend as it grows, which means it will pay out at least £13m a year in future (it paid out about £5.5m in 2017 because it only traded publicly for five months), so the debt reduction schedule forecast by the broker is perhaps a best-case scenario.

There’s no guarantee Strix will continue to grow, or that it will continue to use surplus cash to repay debt after 2018. We don’t know how stable the kettle controls market is because there’s no public record of Strix’s long-term trading performance. It earned 57% of its revenue from its top 10 customers in 2017, and the loss of any of their business could be problematic. And Strix is being challenged by low-cost manufacturers in China.

But Strix’s business model should be robust, and its strategy covers the obvious risks.

Kettle controls are a vital component in a relatively inexpensive consumer appliance sold around the world, so maybe demand doesn’t swing around too wildly. The company’s admission document says it has made at least £30m a year in adjusted profit (EBITDA – Earnings Before Interest, Tax, Depreciation and Amortisation) in every year since 2007.

Since Strix is the market leader, it’s not surprising it has big customers, and since it collaborates with them to make better kettles, those relationships should probably be regarded as strengths rather than weaknesses.

Low-cost competition is a threat, but Strix manufactures in China as well as the Isle of Man, it already supplies 50% of the Chinese market, and its factories are automated. It also tests products containing rival controls and reports them to the authorities if they fail safety standards. It’s the only company I follow that reports competitor product recalls.

Because of their short trading histories, I don’t think I’d ever be confident enough in a new issue to pay top-whack for the shares. What draws me to Strix is, after adjusting for the debt, it currently trades at about 12 times earnings.

That’s not a particularly low multiple for a highly indebted company but Strix may not be highly indebted in comparison to what it earns. Perhaps in a few years time it won’t have much debt at all.