Since they were privatised in the mid 1980s and early 1990s, the shares of regulated utility companies have found a place in many private investors’ portfolios. Their main attraction has been an ability to offer a higher income than government bonds with plenty of dividend growth on top.

This made them ideal income stocks. With new pension freedoms meaning that people no longer have to hand over their pension pots to insurance companies to buy an annuity (an income for life), I have no doubt that many people are relying on these shares to provide them with an income in their retirement.

For nearly thirty years these companies have been able to withstand the challenges that industry regulators have set them in order to keep customer bills low. They have become more efficient and have been able to keep investors reasonably happy most of the time – except in 2009 when some water companies had to cut bills significantly and some company dividends had to be cut.

Investors have also been fortunate. Falling interest rates and the cheaper cost of borrowing that came with them made the inflation-proofed income streams of regulated water and electricity companies very attractive. Some companies were taken over whilst pension funds saw them as a better option than owning government inflation-linked bonds and so share prices went up.

Over the last decade, this backdrop has seen regulated utility shares largely do what their investors wanted them to do –give them an inflation-busting return on their money.

But In recent times the skies have darkened over the sector. Regulators and politicians have the sector in their sights. When customer bills are reviewed over the next couple of years there is a growing expectation that water companies will be forced to cut prices. Electricity distribution and transmission companies such as SSE and National Grid will be expected to do the same.

The regulator is also likely to cut the returns on equity that they are allowed to earn so that customers can share some of the gains of cheaper borrowing rates. Given that the companies tend to pay out most of their post-tax profits as dividends this increases the likelihood that some dividends could be cut.

Then there is the prospect of interest rates rising. Utility companies are often seen as bond proxies. As rising interest rates are bad for bond prices, they are seen as bad for the share prices of regulated utilities as well.

Utility companies have also been threatened with renationalisation by a Jeremy Corbyn led Labour government. For what it’s worth, I think this scenario is very unlikely, so investors should concentrate on more realistic threats instead.

These threats have taken their toll on the total returns earned by shareholders over the last year as shown in the SharePad table below. Water companies have fared worse than electricity companies.

We can also see below that yields for most of the shares are now quite high whilst forecast dividend cover is generally thin. High yields are a sign that a dividend is at risk of being cut or that future dividend growth will be low. Occasionally, it can be a sign that shares are undervalued.

Debt levels are also high – although this is quite normal in companies with steady and predictable cashflows – and interest cover looks to be uncomfortably low at Severn Trent and United Utilities.

Can the dividends paid by these companies stand up to the prospects of lower customer bills and the lower profits that will come from them? Or will they have to be cut? 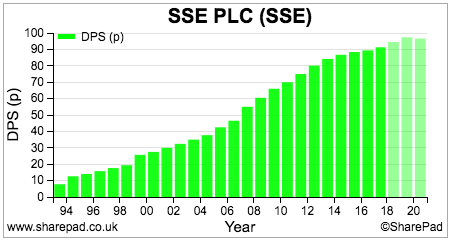 SSE has a brilliant record of unbroken dividend growth. It has increased its dividend for 25 years in a row. It has been able to do this by investing heavily in its electricity distribution and transmission assets to increase its profits whilst also putting huge amounts of money into wind farms.

Yet, the company’s overall profitability has struggled to grow in recent years. At the same time, it has committed to grow its dividend by more than or at the same rate as inflation (measured by the retail prices index). This has pushed dividend cover down and has seen the rate of annual dividend growth slow dramatically in recent years as SSE has found it more difficult to keep its promise to shareholders. 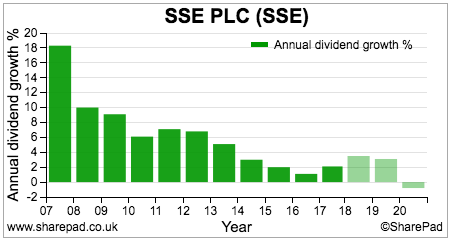 Now, consensus forecasts from City analysts are predicting a very small dividend cut in 2020. If this is as bad as it gets for SSE and it can increase dividends in line with inflation after 2020 then perhaps a case can be made for saying that its shares are decent value for income investors given the forecast yield is over 7%.

But could SSE’s dividend have further to fall after 2020?

It cannot be ruled out in my view. The company’s profits are still heavily reliant on income from generating electricity and supplying electricity and gas. Electricity generation profits are notoriously volatile whilst SSE has been losing supply customers in recent years and is looking to save money by merging its supply business with nPower’s.

Some relief could come from reduced spending on renewable energy which could see a welcome improvement in free cash flow and an end to rising levels of debt. 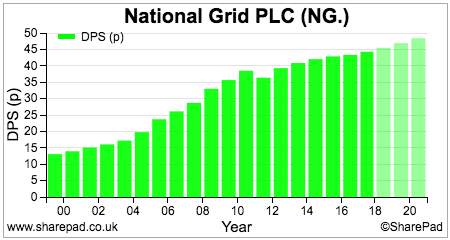 Along with SSE, National Grid has been a very reliable dividend payer and is expected to keep on being one for the next three years according to current analysts’ forecasts. Like SSE, its dividend growth rate has fallen significantly in recent years and it is now growing broadly in line with inflation. 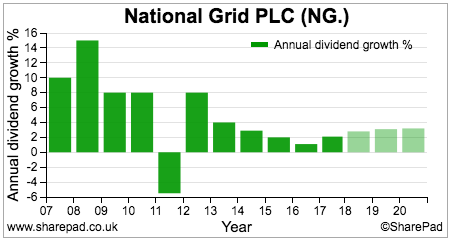 In the UK it is facing up to the threat of lower returns from lower customer bills but unlike its peers it has a sizeable American business as a source of profits and cash flows.

National Grid’s US business has been a tough one to run over the last twenty years but the company has done a reasonably good job of getting a satisfactory return on its infrastructure investments over there. It should be able to keep on doing this and therefore could be in a better position to maintain and modestly grow its dividend than SSE. 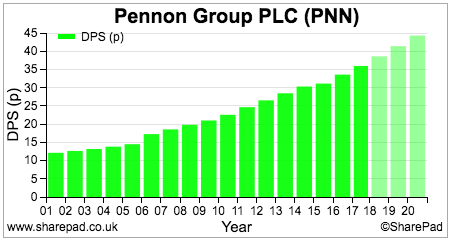 Pennon – the owner of South West Water – has been the star performer in the water sector as far as dividends have been concerned. Not only has it been very good at running its water business it has been the only company in the sector that has been able to build up and retain a meaningful unregulated business in the form of Viridor, a waste management company. 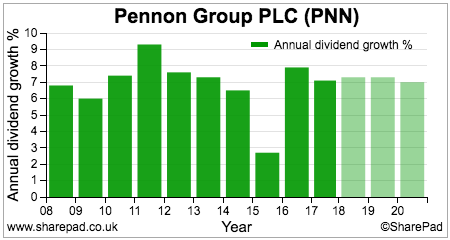 Viridor has been facing tough business conditions in recycling but its energy recovery facilities have been doing well. The profit contribution from Viridor along with good performance from the water business has seen Pennon deliver some very impressive rates of inflation-busting dividend growth. It is currently expected to continue doing this until 2020 when new, lower water prices are expected.

Pennon shares are down by more than 16% since the start of 2018 as investors worry about the outlook for profits and dividend growth. The shares now offer a prospective yield of nearly 6% which is higher than has been the case for many years. Given that the water regulator still intends to keep financial rewards for good performance and Pennon’s very good record on beating performance targets, it is probably a share that warrants a closer look by anyone thinking of investing in the sector. 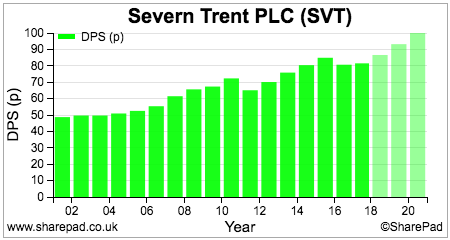 Severn Trent has a patchier dividend track record. It cut its dividend after the 2010 and 2015 water price reviews but is currently expected to grow its dividend by more than inflation for the remainder of the current pricing period out to 2020. Even though there has been a couple of dividend cuts in the past, it is interesting to note that the overall dividend per share has been on an upwards trend which is a positive development. However, unlike Pennon, it does not have an unregulated source of income to contribute to dividend payments. This leaves it more exposed to the upcoming review of prices and the lower profits that are expected to follow.

If it is going to be able to maintain or grow its dividend payment after 2020 it will have to make extra money from beating the regulator’s performance targets.

The owner of North West Water cut its dividend after the 2010 price review but has been able to maintain or grow it since then. 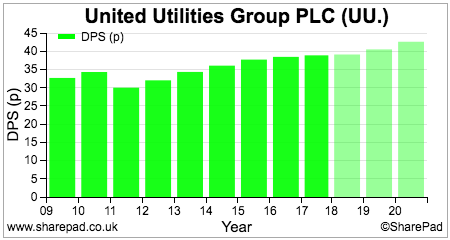 That said, it has had the weakest dividend growth rate of the stock market listed companies. As with Severn Trent, United Utilities dividend is at risk depending on the outcome of the next price review. However, it is also the cheapest water stock on the market and is valued at only a small premium to its regulated asset value (RAV). RAV is the value of water company assets that the regulator takes into account when setting prices and allowed returns on assets and equity.