Highly profitable companies can make outstanding long-term investments. Arguably, the best way to measure a company’s profitability is to compare its profits with the amount of money invested to make them. This is known as the return on investment or return on capital employed (ROCE).

One person’s definition of a highly profitable business will differ from another’s. As far as I’m concerned, my threshold is for companies to have a consistent ROCE – over an economic cycle – of 15% or more.

It is very important for investors to understand the drivers of a company’s ROCE – how it is achieved. This boils down to two things:

ROCE can be calculated by multiplying a company’s operating margin by its capital turnover.

A company can therefore improve its ROCE by three main routes:

If we look at the ten highest ROCE companies – I’ve adjusted the ratios to take into account rented or leased assets – from the FTSE All Share Index below you can see that eight of them have very high profit margins. 4imprint (LSE:FOUR) and Softcat (LSE:SCT) have relatively low profit margins and make their high returns by having a very high level of revenue compared with their capital employed – a high capital turnover.

High ROCE underpinned by a high profit margin is often an extra seal of quality. This is because high margins are often – but not always – a sign that a company has pricing power and limited competition. Not only that, high profit margin businesses are also much better placed to cope with tough trading conditions or a weak economy.

According to SharePad, there are 194 companies listed on the London Stock Exchange that have experienced share price declines of 50% or more during the last year. Of these, only 25 of them had profit margins of 10% or more.

The table below shows some high profile stock market fallers over the last year. As you can see, high profit margins are no guarantee of safety if they attract competition which leads to lower prices. This is what is currently happening to funeral provider Dignity (LSE:DTY). 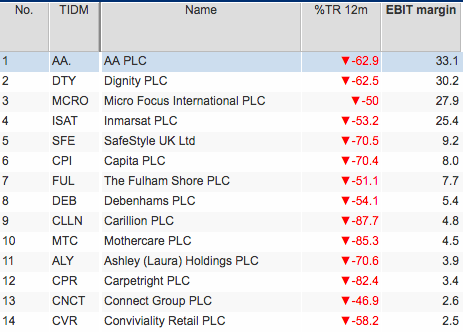 For years Dignity has increased the prices it has charged for funerals and cremations and has earned very high profit margins as a result. This has now attracted lots of competition which has forced Dignity to cut its prices and warn investors that its profits will be significantly lower in the future than they have been in the past. Its share price is experiencing the same effect.

If you are going to invest in a high margin business then you have to spend some time thinking about whether its margins are sustainable.

Dignity aside, many recent stock market disasters have been experienced by very low margin businesses such as Carillion, Carpetright, Connect Group and Conviviality Retail. In the case of Carillion and Conviviality, they were not able to withstand the shocks to their businesses and ended up in the hands of administrators. There are fears that Debenhams and Mothercare could follow suit.

I think it you value a good night’s sleep then there are strong grounds for doing so. Good businesses with low margins are few and far between. However, as with many things in investing there usually tends to be a few exceptions to a rule.

According to SharePad there are only 33 companies listed on the London market with a current ROCE of more than 15% and a current EBIT margin of less than 5%. If ROCE is adjusted for leases and the margin threshold is pushed up to 6% (because lease interest payments are added on to profits and therefore increase profit margins) there are only 22 companies that meet the criteria. 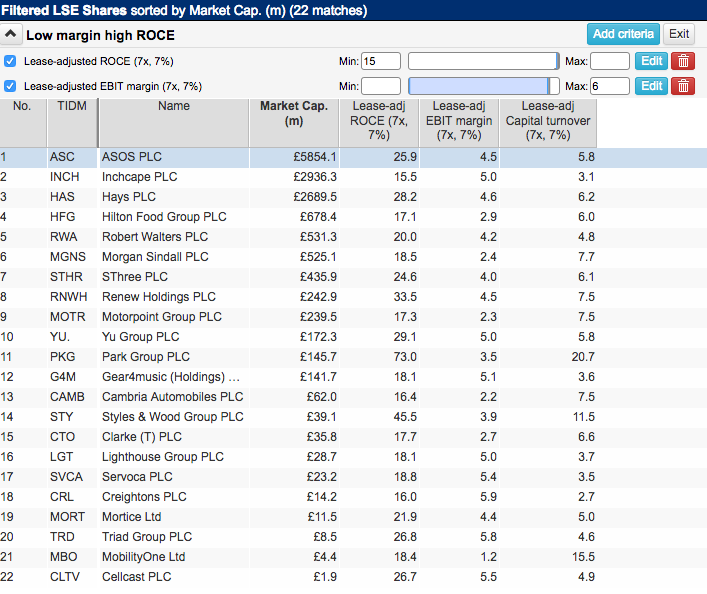 ASOS (LSE:ASC) is a great example of a company that has thrived despite having low profit margins. It has achieved its high ROCE by selling lots of clothes at competitive prices. 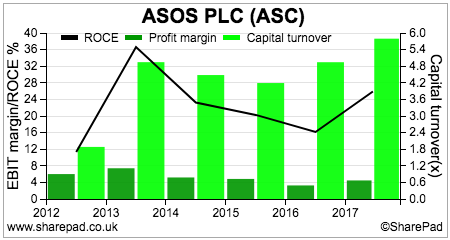 ASOS’ business model is all about volume – selling more stuff. By not having the large costs associated with high street stores and selling over the internet it is able to charge lower prices. Backing this up with an efficient delivery and customer returns service is what has given it a very powerful business franchise that is difficult to compete with.

City analysts are still expecting the company to keep on growing its sales at an impressive rate. 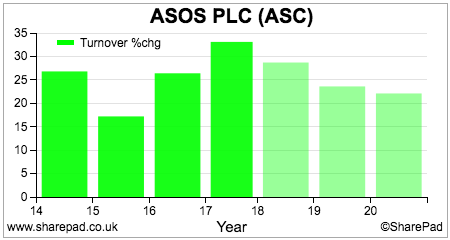 ASOS is clearly a very good business. The problem that most investors will have with it is the hefty price tag on its shares which currently trade on a one year rolling forecast PE of just over 62 times.

Other things to consider

Companies can have high capital turnover ratios for other reasons. It might be shrinking the amount of capital invested in the business by selling off unproductive assets. This is a good thing to do but is not as attractive as a business with growing sales.

Capital employed can also fall – and cause capital turnover to rise – if a company does not invest in its asset base. This may be the case if capital expenditure (capex) has been less than depreciation for many years. If the company wants to stay in business for the foreseeable future worn out assets will eventually have to be replaced. When they are, there is a strong possibility that capital turnover and ROCE will fall.