In this article I’ve attempted to find Fundsmith-like companies using SharePad. The results are mixed but there’s a lot to be learned from the experiment.

A letter from Terry

If like me you hold units in Fundsmith, last month you will have received a letter from the fund’s celebrated manager Terry Smith. In publishing an annual letter, Smith is emulating the world’s most famous investor, Warren Buffett, who explains his investment performance and strategy every year.

Smith’s strategy has much in common with Buffett’s too. In this year’s letter, he quotes Buffett’s partner, Charlie Munger, to explain why the businesses he invests in are so valuable:

“Over the long term, it’s hard for a stock to earn a much better return than the business which underlies it earns. If the business earns 6% on capital over 40 years and you hold it for that 40 years, you’re not going to make much different than a 6% return—even if you originally buy it at a huge discount. Conversely, if a business earns 18% on capital over 20 or 30 years, even if you pay an expensive looking price, you’ll end up with a fine result.” [emphasis added by Terry Smith]

“I have no idea why Mr. Munger chose those particular rates of return but what I do know is that he is not voicing an opinion. What he is describing is a mathematical certainty. If you invest for the long term in companies which can deliver high returns on capital, and which invest at least a significant portion of the cash flows they generate to earn similarly high returns, over time that has far more impact on the performance of the shares than the price you pay for them.” [Emphasis added by me]

Return on capital is like a company’s interest rate. When you put money in a savings account it earns interest every year, which is added to your savings. Assuming the interest rate is fixed, each year your bank account will be credited with more interest than the year before because you are receiving the same percentage of a bigger amount of savings. This is compound interest in action.

Interest is a measure of return. In the context of a company it is synonymous with profit and the interest rate is synonymous with the return on capital, which will in any half-decent company be far higher than the interest rate on a savings account. Such a company will profit more each year, assuming it earns the same return on capital. The firm’s profit and stock market value will compound and, over the long-term, trounce the return from the savings account. This is why Munger and Smith favour tying their money up in high returning companies.

But there’s a complication. In the savings account example, I haven’t allowed you to withdraw any money. All your interest has been added to your savings to generate growing returns.

It’s rare for a company to reinvest all its profit. Recently, I showed how James Halstead is paying out about 75% of profit to shareholders as dividends. Assuming it doesn’t borrow or raise more capital on the stock market, it can only reinvest a maximum of 25% of profit. Businesses have other uses for profit too, like buying back shares and paying off debt.

Smith describes a very short and rather elegant algorithm that gets around this problem by focusing not just on companies that earn high returns, but also those that plough them back into the business:

I want to put this algorithm to the test, by finding companies that have earned high returns in the past, and seeing if they reinvested heavily.

SharePad can process most of our algorithm, and a bit of work in a spreadsheet can do the rest. But first, we need a measure of reinvestment – a reinvestment rate – to find the companies that are compounding their profits. 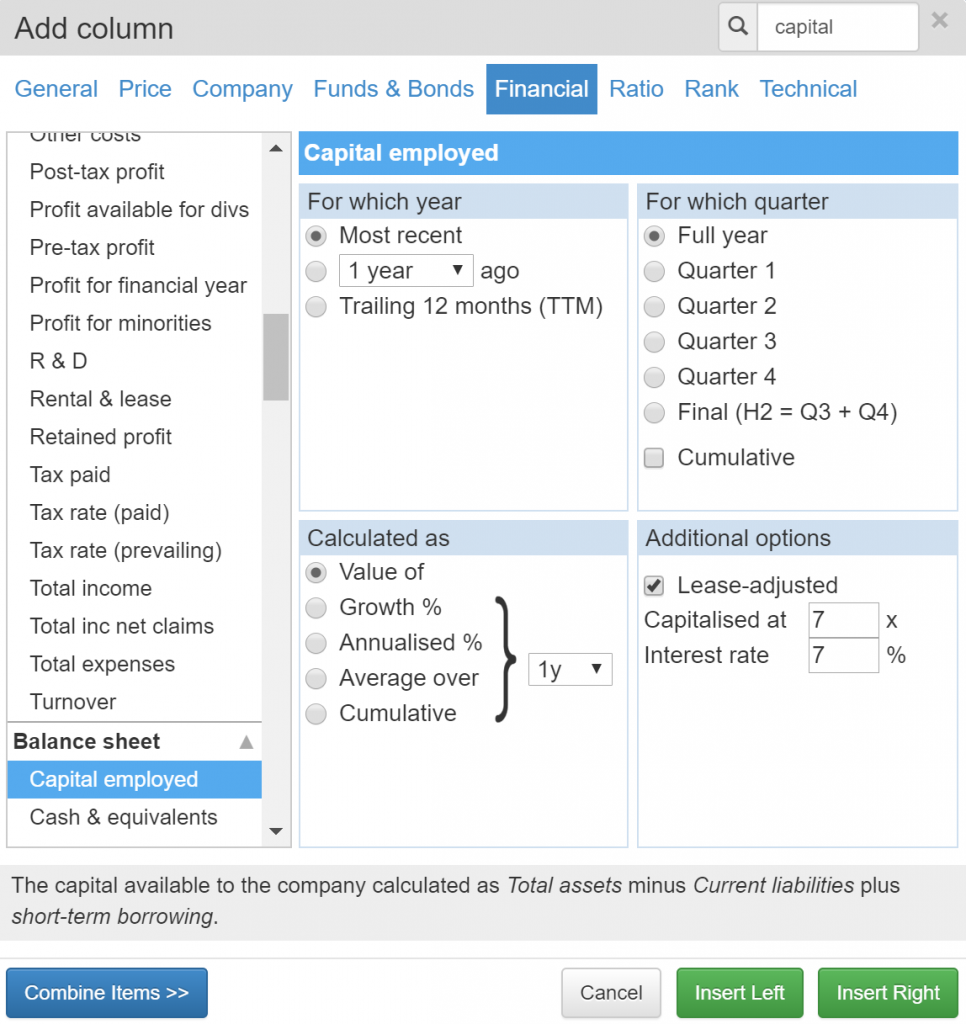 Click on the Combine items button and choose subtract: 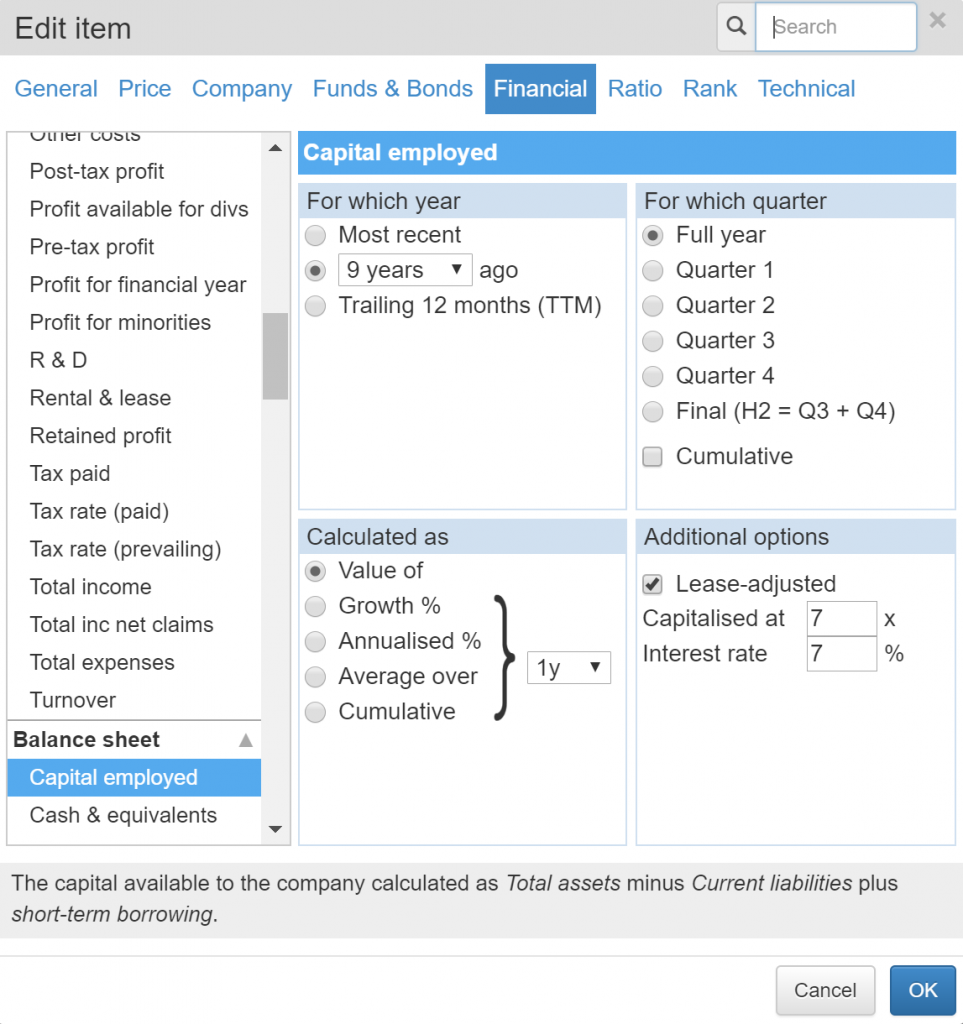 You also need to create a table in SharePad with a column for the cumulative total of profit. Here are the settings I used: 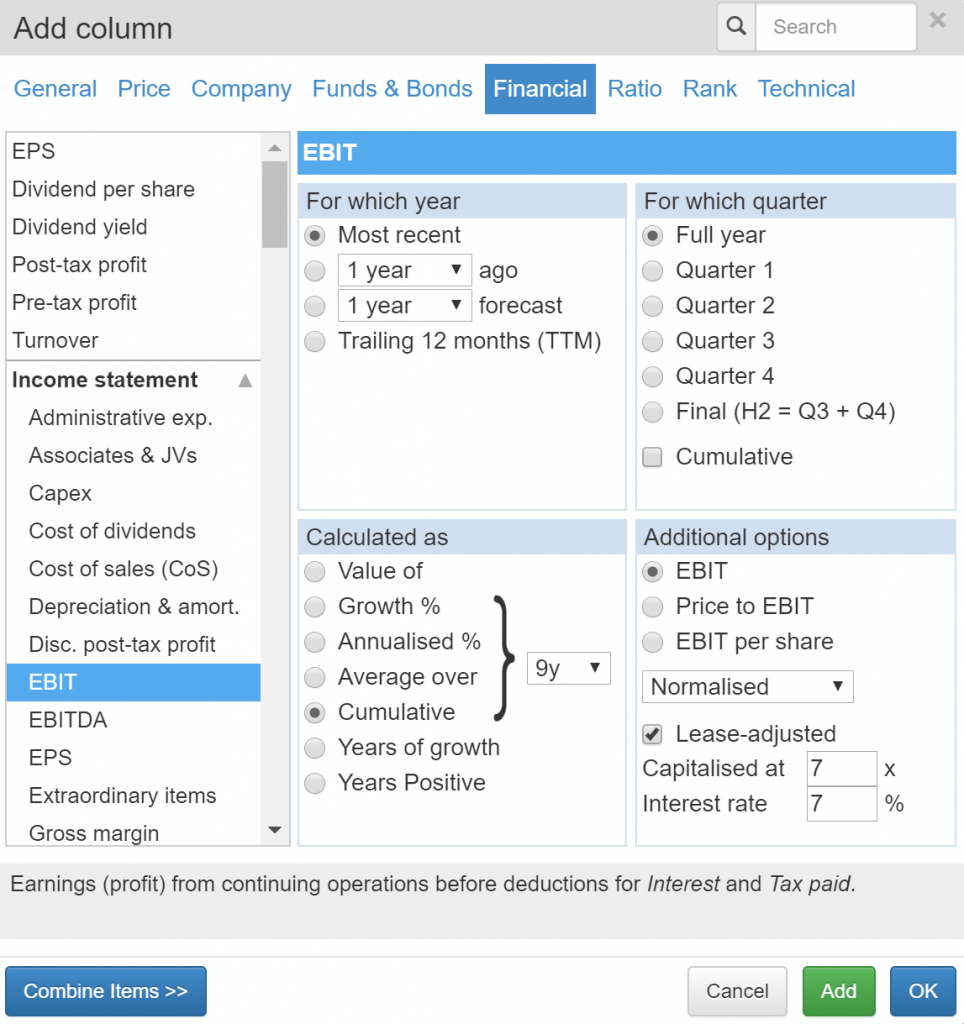 To reduce the number of companies in the list and make it more Fundsmith-like, I excluded:

This is the table, filtered and sorted from highest return on capital employed (averaged over nine years)* to lowest: 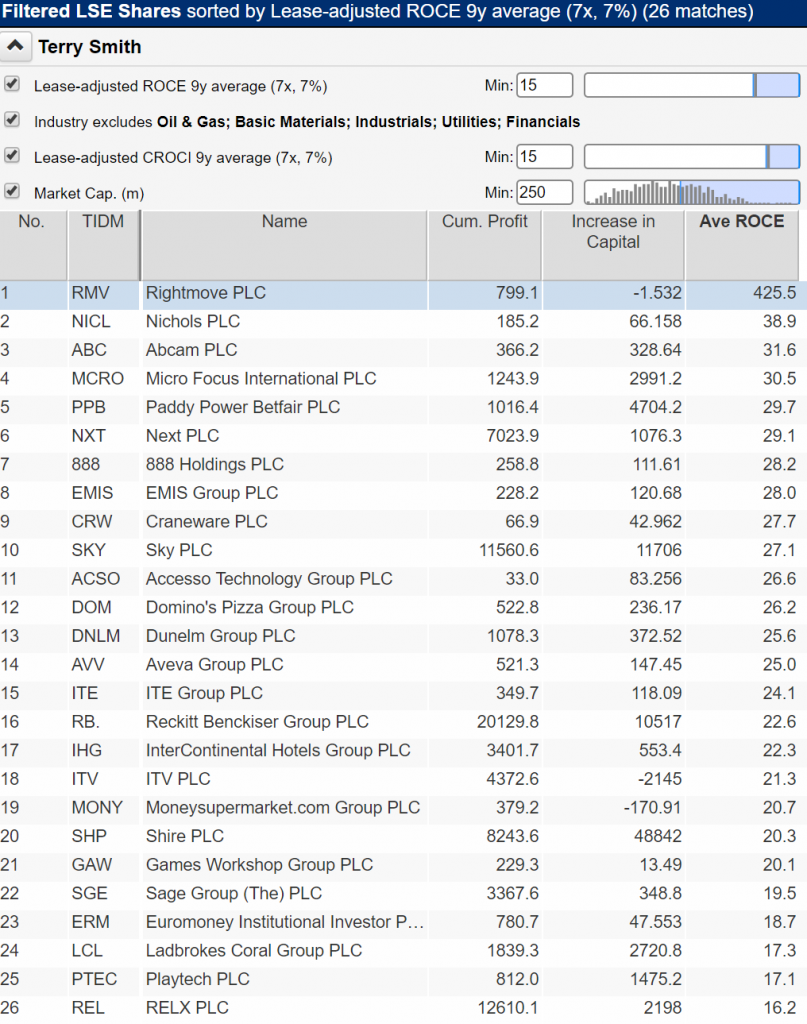 As you’d expect, it’s a reasonably impressive bunch of shares. Some of them, InterContinental Hotels and Sage, for example, are Fundsmith holdings.

To calculate the reinvestment rate, we must export the table to a spreadsheet where we can divide the increase in capital employed by the cumulative profit. Use the Sharing button in SharePad’s List view. 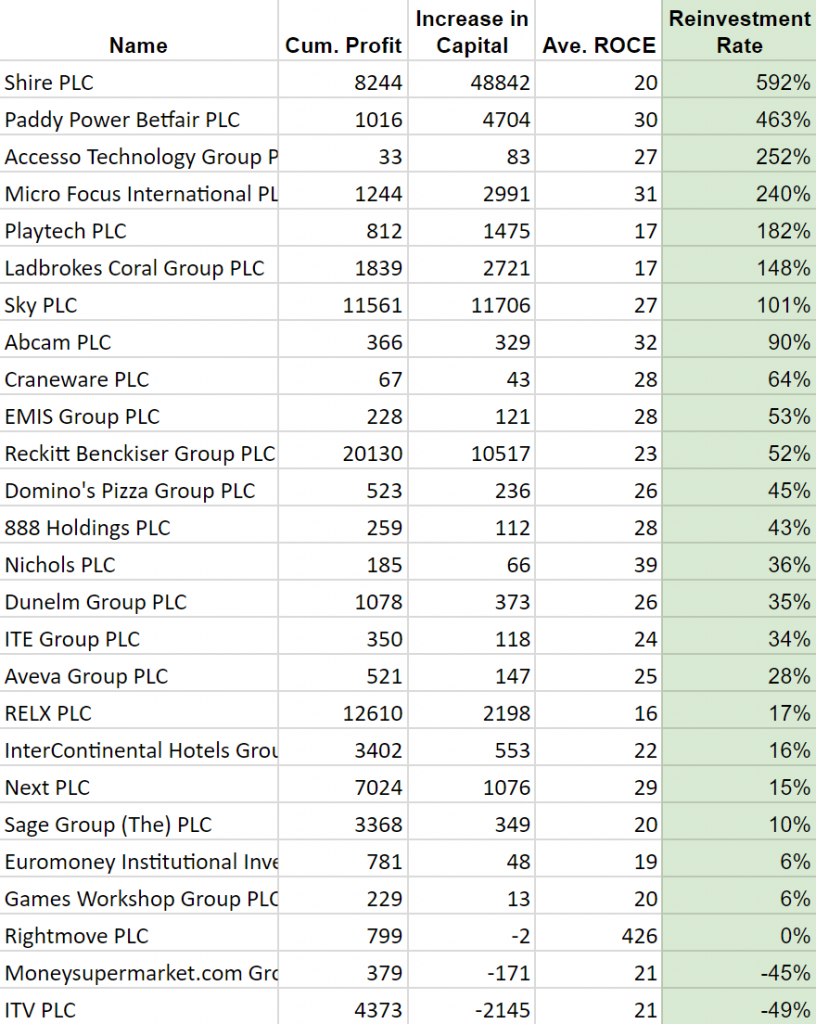 You can view the spreadsheet here but don’t take it too seriously. My experiment is, shall we say, inconclusive. I’m not bitter, we sometimes learn more from our failures.

The companies dominating the top of the table have increased capital employed by far more than profit, which has ballooned their reinvestment rates. The results are polluted because they have obviously raised external capital.

But there’s a more fundamental problem. The most profitable company, Rightmove, has moved from the top of the table to near the bottom. Moneysupermarket has been demoted severely too. Both companies actually used less capital in their most recent financial year than they did nine years previously.

Investing less ought to have crippled growth at these companies, but actually, according to SharePad, Rightmove has achieved an annualised growth rate of 21% over the last nine years, and MoneySupermarket has achieved 27% growth. If we’re looking for compounders that will grow profit, the reinvestment rate as I’ve constructed it doesn’t look like a good way to do it.

How can that be?

I suspect the answer lies in the way investment is accounted for. Accounting demands that long term investments, tangible assets like property and machinery, are added to a firm’s balance sheet as capital, while day to day expenses are deducted from profit.

A company like Rightmove, which is an online estate agent, doesn’t require much physical investment, but its day to day expenses, like marketing, bring long term benefits. That’s because Rightmove needs to build a strong brand to raise the profile of its website, but a home-grown brand is an intangible asset and accounting regulations forbid companies from recognising it on their balance sheets because it’s so difficult to value. Rightmove is investing, but it’s not in the numbers.

What does Terry do?

Smith knows this for sure. But how then does he calculate a reinvestment rate? Or does he just have a rough idea like the rest of us? The letter gives little away, it says:

“…it requires a long-term investment perspective to capture that compounding by high return companies, and finding those companies is not easy especially as you need to assess their ability to grow and ward off competition.”

I’ve tabled the first part of my question at the AGM later this month. I’ll let you know if I get an answer.

*Phil Oakley thinks Smith, like Buffett, may well be investing in companies like Rightmove, that can grow without adding much new capital, although, as I say, they may be investing in other ways. To find these “capital-light” companies, he says, he prefers to use a variant of Return on Capital called Incremental Return on Capital, which compares the change in profit over a certain period to the change in capital over the same period. He introduced this concept in a recent article.