Aquis Exchange is taking on the London Stock Exchange by offering unlimited trading for a fixed monthly fee. MaynardPaton studies the disruptive qualities, favourable economics and profit potential of the challenger’s trading platform.

Investors love ‘disruptors’. Find a pioneering upstart that is stealing market share from industry dinosaurs, and your portfolio may enjoy a huge stock-market winner. Amazon of course is the textbook example.

One company that could be a genuine disruptor is Aquis Exchange, a £180 million small-cap trying to revolutionise share trading and taking on the likes of the London Stock Exchange and Euronext.

The history of Aquis Exchange

Founder Alasdair Haynes hit upon the idea for Aquis Exchange in a mobile-phone shop on Tonbridge high street during 2012. He recounted the following to Edison Investment Research: 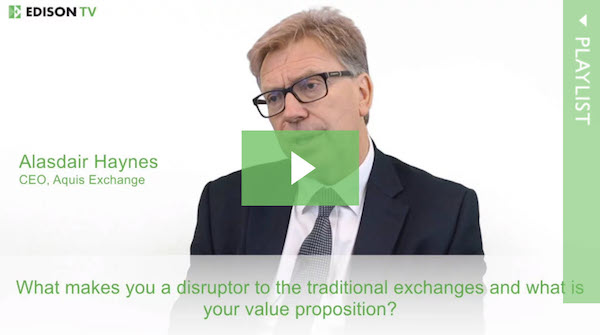 “The ‘eureka’ moment actually happened… when I was buying my son a phone in Vodafone, and having just run an exchange, I suddenly realised what Vodafone was doing was very similar to a stock exchange.

It was… when my son wanted the all-signing, all-dancing latest iPhone with unlimited calls, unlimited texts, unlimited downloads, I suddenly realised that is what an exchange can do as well — unlimited data, unlimited trading, unlimited connectivity — and that was actually the birth of Aquis in that very shop.“

Mr Haynes was convinced Aquis could ‘disrupt’ existing share-trading exchanges by introducing a subscription-based pricing model similar to those offered for mobile phones.

The Aquis service commenced during 2013 with the ambition that banks and brokers, at least according to Mr Haynes, would be able to save “tens of millions a year” on trading costs.

Standard trading fees at the London Stock Exchange are in contrast charged at 0.45% of the value of the trade.

The fixed-fee pricing, alongside adding to the number of markets covered (currently 15) and stocks offered (currently 1,700-plus), has gradually increased Aquis’ market share of all European share trading. 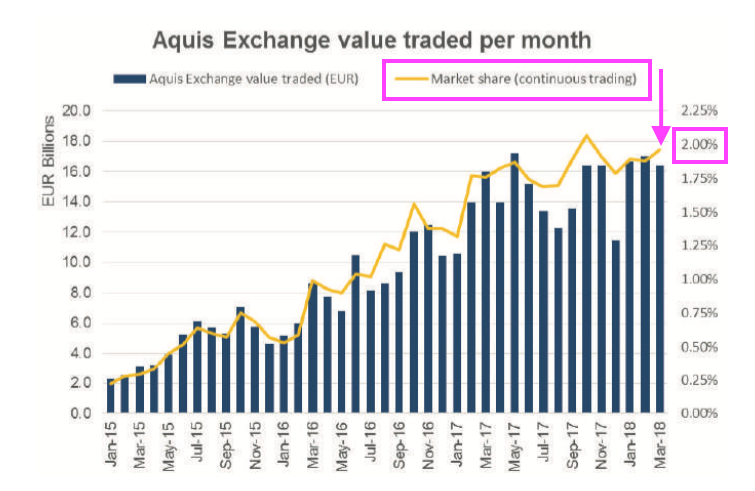 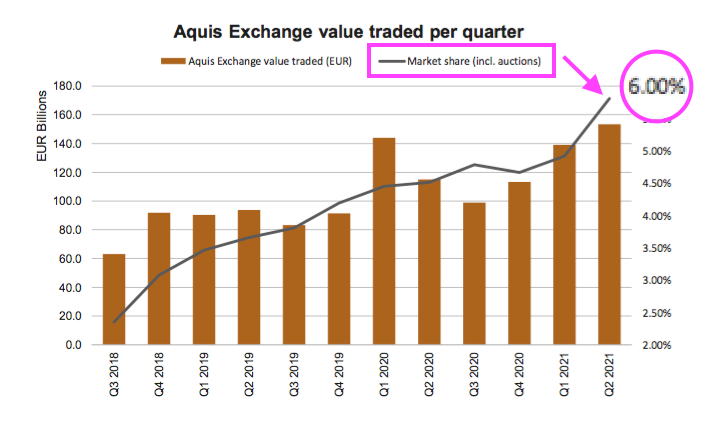 Revenue earned through trading fees is complemented through sales of data alongside income from licensing the group’s software.

Note that Aquis’ UK and EU trading exchanges operate as Multilateral Trading Facilities, or MTFs, which conduct only share trading. MTFs do not handle new issues or stipulate listing rules, which are the preserve of recognised investment exchanges, or RIEs, such as the London Stock Exchange and Euronext.

However, Aquis entered the RIE sphere following the £3 million purchase of NEX — the former Plus Markets/ISDX/OFEX exchange — during 2020. The acquisition broadened the group’s revenue to include listing fees and presented the opportunity to ‘disrupt’ another aspect of share trading.

“Transformational” rulebook changes at what has since been rebranded the Aquis stock exchange include: 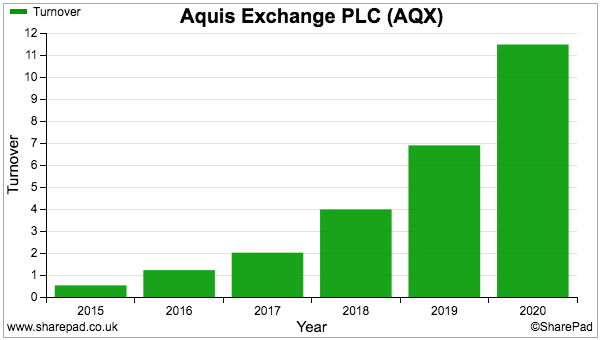 … which allowed Aquis to report a small profit for 2020: 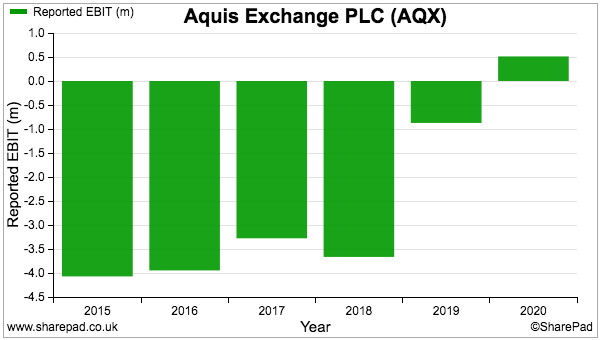 The progress has attracted investor attention. The shares floated at 269p during 2018 and recently traded at 655p: 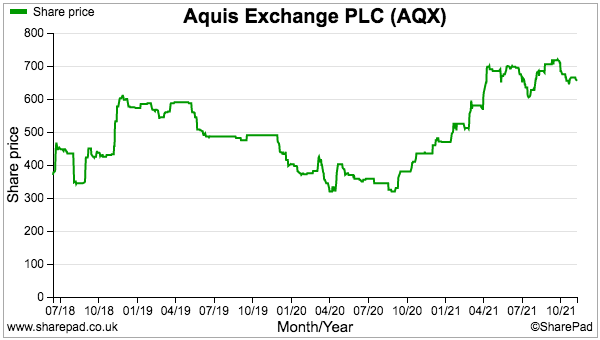 Aquis’ shares ironically trade on the LSE’s AIM and not on the group’s own Aquis stock exchange. RIEs require regulatory permission to effectively ‘self-regulate’ trading in their own shares — permission that Aquis has yet to receive from the FCA.

The shift from loss to profit last year emphasised the attractive economics of Aquis’ business.

The footnote below from the 2020 annual report shows trading and data fees from Aquis’ MTFs advancing by £2.3 million…

…which in turn transformed a £1 million loss into a £0.1 million profit:

Increasing MTF profit by £1.1 million for every £2.3 million of new revenue feels very appealing and underlines the ‘scalable’ qualities of operating a share-trading platform. The incremental cost of handling extra trades and selling extra data should in theory be minimal once the system is fully up and running.

The ‘operational gearing’ inherent within the business is reflected by revenue per employee surging higher: 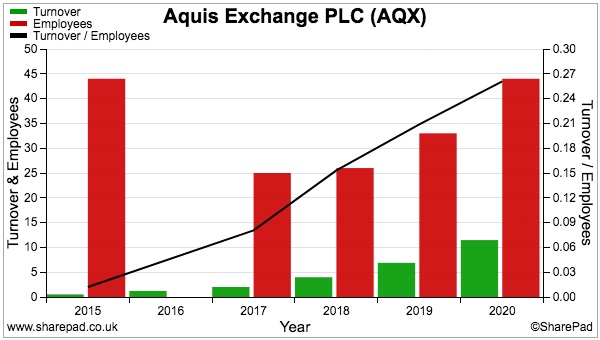 Employee costs represented approximately 55% of all expenses during 2020, and being able to keep a lid on employee numbers (and therefore employee costs) as revenue moves higher ought to do wonders for profit.

The opportunity for profit to grow at a greater pace than revenue leads to some (possibly fanciful) extrapolations.

Six-month trading-fee revenue of £4.9m suggests each of the 34 clients paid an average £24,000 a month to trade upon the group’s MTFs.

Were each customer to one day pay the maximum £80,000 a month, trading revenue would expand to almost £33 million versus approximately £10 million at present.

And when you consider extra MTF revenue of £2.3 million translated into extra MTF profit of £1.1 million during 2020…

…then revenue growing by £23 million to £33 million could perhaps translate into extra MTF profit of £11 million.

Of course not every customer will want to pay the top-tier £80,000 fee. But management did remark during this webinar (c15mins) that potential clients could total between 80 and 90. A mix of existing clients climbing tiers and new clients coming onboard could therefore still get Aquis to trading fees of £30 million or more.

Bumper revenue potential is supported by this presentation slide:

Note that no similar correlation between trading volumes and liquidity size exists for Aquis (blue bars).

Management claimed during this webinar (c14 mins) that “over time, you have got to be pretty certain the [trading] bars will grow to where your actual [liquidity] market share is“.

The belief implies Aquis’ market share of trading will eventually grow from 6% to 22% — driven by City rules on ‘best execution’ that demand banks and brokers always seek the best price for their clients.

(To explain: Aquis’ 22% share of liquidity essentially means the group’s MTFs offer the best price for their 1,700-plus stocks on average 22% of the time. Banks and brokers should therefore (in theory!) be trading through Aquis’ MTFs 22% of the time to meet their ‘best execution’ requirements).

Trading fees are at present running at approximately £10 million, so expanding from a 6% to 22% market share of trading ought to push such income beyond £30 million.

Another potential growth angle to Aquis is via data and something called the ‘consolidated tape’.

Stock exchanges in the United States such as the NYSE and Nasdaq have to send their trades and quotes to the Consolidated Tape Association (CTA), which in turn processes and publishes all US stock data.

Market participants then pay the CTA to receive the consolidated trade/quote information, while the NYSE and Nasdaq (and other exchanges) receive a share of the proceeds based on their respective market shares of trading.

No CTA equivalent exists in Europe… at least for now.

…and management said during this webinar (c26mins) the introduction of a consolidated tape seems possible for 2024 and “could have a material beneficial effect on our results in the medium term“.

Aquis’ data revenue presently runs at £2 million, while management during this webinar (c31mins) claimed other European exchanges enjoy collective revenue of €100 million from trade and quote data, or as much as €1 billion for all market-data services.

The implication from all this is Aquis’ 6% (or maybe 22%) market share might one day translate into 6% (or maybe 22%) of that €100 million (or maybe that €1 billion) if any European CTA divides up the data income on the same basis as the US CTA.

While the CTA is debated, the European financial regulator has published guidance to ensure stock exchanges sell market data on a “reasonable commercial basis“, which may have an adverse effect on that €100 million (or €1 billion) industry income.

Note also that the charges levied by the US CTA to receive its processed data appear startlingly cheap, which probably explains why live US stock prices are freely available…

…and why live UK prices and many live European prices are not.

City estimates for the next few years are very optimistic, but do not super-bullishly extrapolate market-share gains all the way to 22% or predict a CTA-data windfall:

The forecasts nonetheless underline the potential for favourable operational gearing. For 2022 and 2023, revenue growth of approximately 23% is accompanied by pre-tax profit growth of at least 45%.

The 2023 projections imply Aquis will enjoy a 25%-plus operating margin, which does not seem entirely outlandish when the LSE reported an adjusted 37% margin within its latest figures.

Becoming convinced about the City forecasts, the 22% market-share possibility and a CTA data bonanza requires confidence in the aforementioned Alasdair Haynes.

Mr Haynes continues to act as Aquis chief executive and the various webinars referenced within this article all show him persuasively describing the group’s long-term potential.

Bosses of quoted companies are naturally upbeat when talking to investors, but My Haynes does know a lot about exchanges, He led the European division of trading-software specialist ITG for eleven years before becoming chief executive of Chi X Europe, an MTF, before its sale to what is now Cboe Europe.

Mr Haynes retains a useful shareholding. He owns a near-5% £9 million stake after reducing his holding by 26% at (and since) the flotation. The finance director holds shares worth more than £3 million while a non-exec has nearly £2 million:

One institution seemingly not so confident of Aquis’ future is the Warsaw Stock Exchange. The Polish operator was a very early 20% investor but sold out completely at the float.

Whether the Warsaw Stock Exchange knows something the rest us do not is hard to say.

For now at least, the ‘disruptive’ attributes of Aquis feel genuine — and crucially are supported by existing rules on ‘best execution’ and perhaps in time on new rules about a consolidated tape. Such favourable regulation ought to make upending larger competitors a little easier for Aquis.

Net cash of £14 million should meanwhile ensure the disruption plan is not curtailed by funding difficulties. 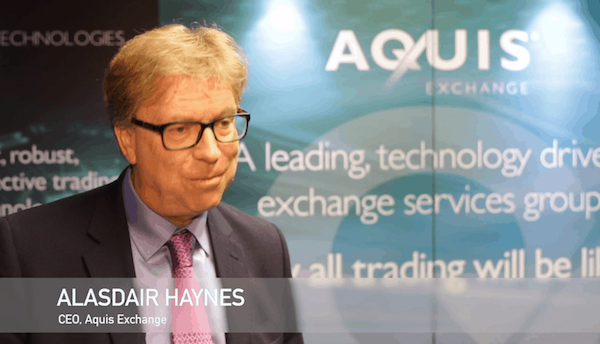 Assuming Mr Haynes’s share-trading vision comes good, then perhaps Aquis could achieve pre-tax profits of at least £15 million from trading/data fees within the next 5-10 years…

… and that’s before considering plans to convert the old NEX exchange into a vibrant AIM-type platform — but with higher standards to deter shady issuers.

All told, the £180 million market cap certainly reflects profits surging well beyond the £6 million projected for 2023 as the group’s operational gearing really kicks in.

But the confident rating is very understandable given the authentic disruption possibilities in what is an extremely lucrative industry for the present incumbents.

Maynard writes about his portfolio at maynardpaton.com and hosts an investment discussion forum at quidisq.com. He does not own shares in Aquis Exchange.