Screening For My Next Long-Term Winner: Zytronic 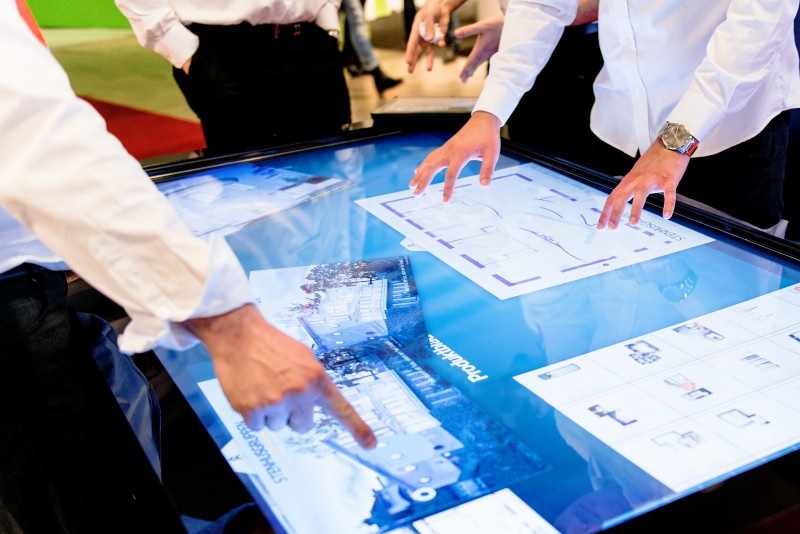 Let me start with a confession: 2018 is fast becoming a year to forget for my portfolio.

Suffice to say, my shares have suffered a further drubbing… and my annual return is now firmly entrenched in negative territory.

I have to admit, those sizzling summer days of soaraway share prices now feel a long time ago.

Still, a wise billionaire once said that we should always be greedy when others are fearful…

…and with so many investors currently fretting about all sorts of worries, now seems as good a time as any to jump on SharePad and search for those bargain buys!

This share also boasts a super history of rising dividends

You might recall from the other week that I decided to unearth the market’s most reliable dividend payers.

My theory was simple — companies with illustrious payout records should provide much more reliable returns during market setbacks than a collection of more speculative shares.

I therefore employed SharePad to identify companies that had lifted their dividend every year for at least the last ten years… and by a compound average of 5% or more.

I also limited the search to companies that offered a forecast payout yield of 4%-plus.

My screening pinpointed PayPoint and you can click here to read how SharePad helped me evaluate that business.

However, my SharePad searching from the other week also revealed a second interesting name.

You see, this second share boasted an extended history of rising dividends, too…

…but in addition, offered a 5.7% forecast yield and net cash that represented a substantial 22% of its market cap.

What is the catch to this accelerating and generous income?

The second company was Zytronic (LSE: ZYT), and here are the results from that previous SharePad search: 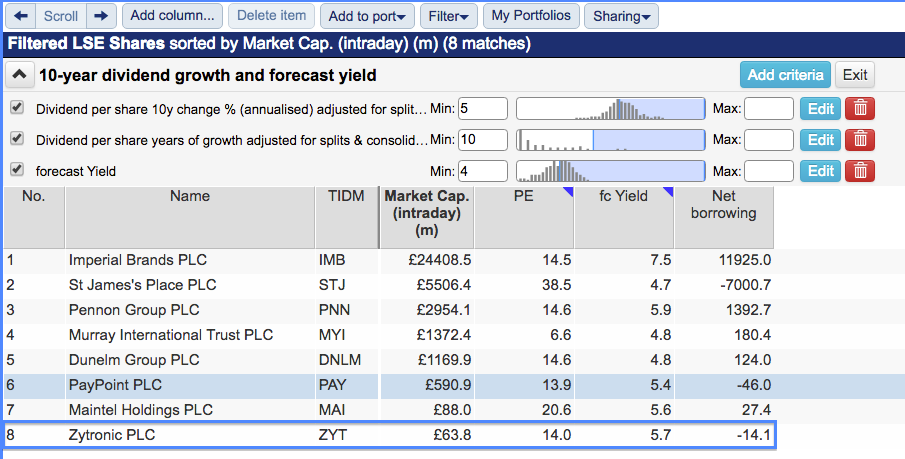 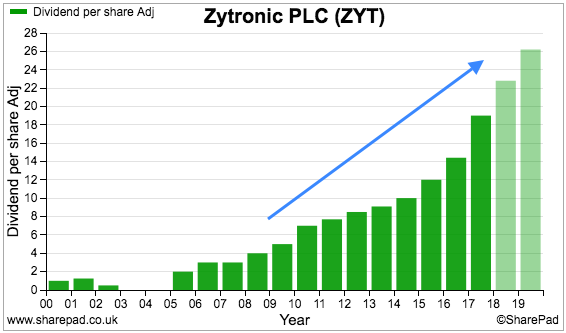 Zytronic floated during 2000 and the payout history is not perfect. In fact, the firm’s dividend went missing during 2003 and 2004.

However, the chart does show ten consecutive improvements after 2008. City projections suggest a further two years of advances as well.

If anything, the chart shows the rate of dividend growth starting to accelerate. And faster-growing dividends are normally very encouraging for shareholders.

However, Zytronic’s yield is currently a handsome 5%-plus…

…and I therefore wonder what the catch is to this accelerating and generous income.

A check on SharePad’s Forecasts tab shows the immediate drawback: 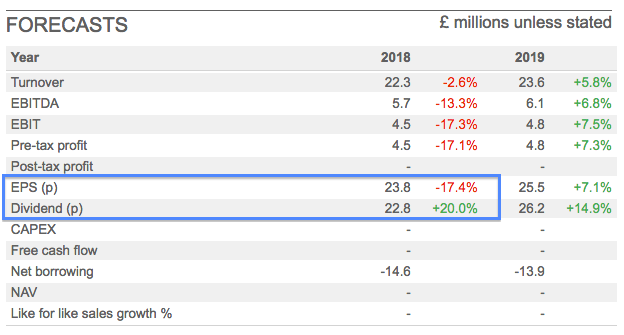 Near-term earnings per share (EPS) are expected to drop by 17%.

What’s more, the EPS estimate cited in those forecasts is only a penny greater than the predicted dividend per share.

As such, that 5%-plus yield may not be sustainable should the EPS estimate prove too optimistic.

Anyway, let’s take a closer look at Zytronic. I will start with what this small-cap actually does.

Zytronic has designed and manufactured industrial touchscreens since the 1980s. These days the group’s main sales come from touchscreens used in cash machines, slot machines, vending machines and the like: 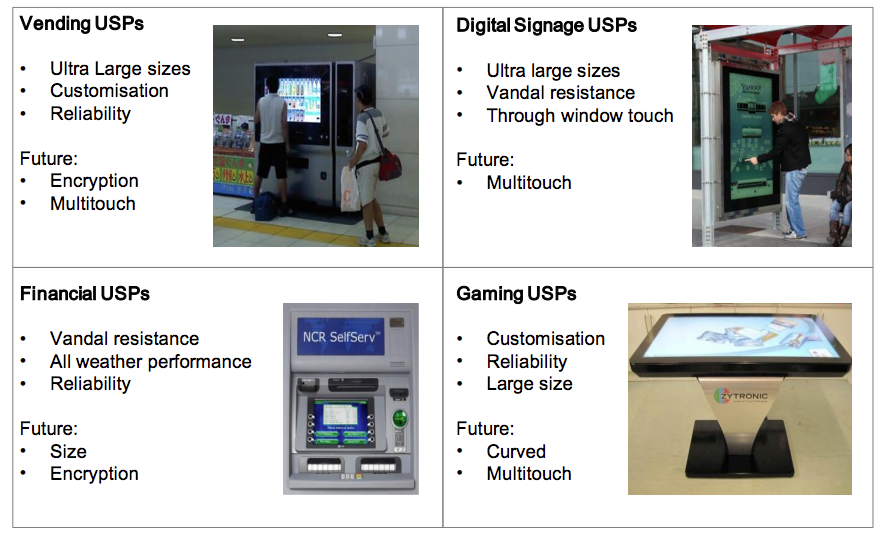 This chart from Zytronic shows how gaming-related revenue has become more significant over time: 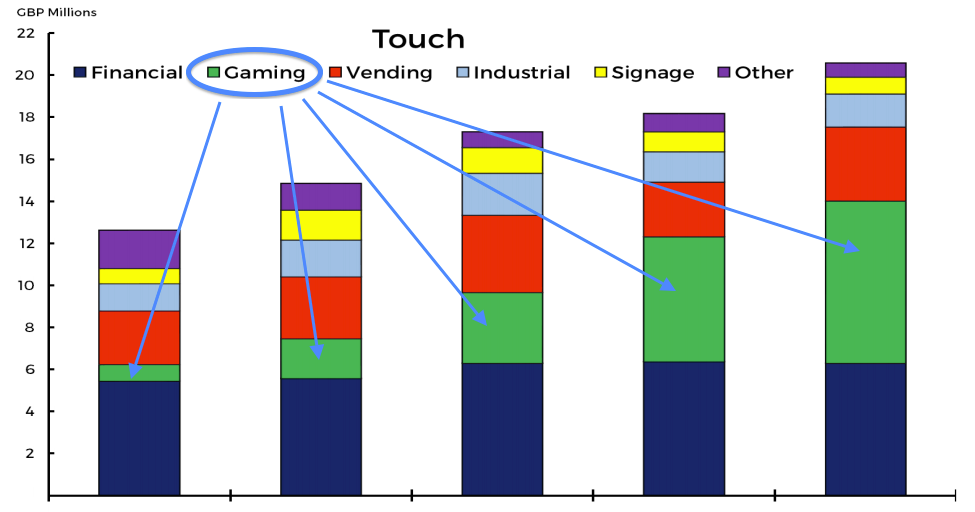 I suppose demand for touchscreen card tables may have helped matters: 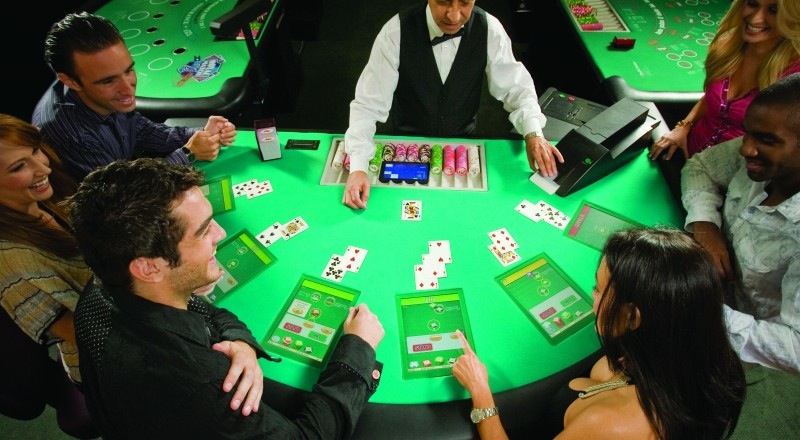 I would not have guessed Zytronic also makes touchscreens for self-service pizza kiosks: 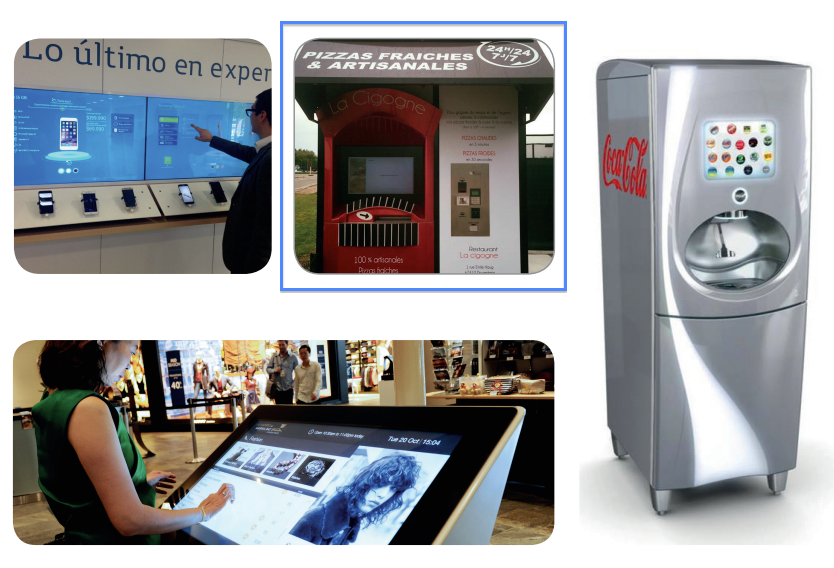 Another company chart shows how the larger touchscreens have become more significant to sales: 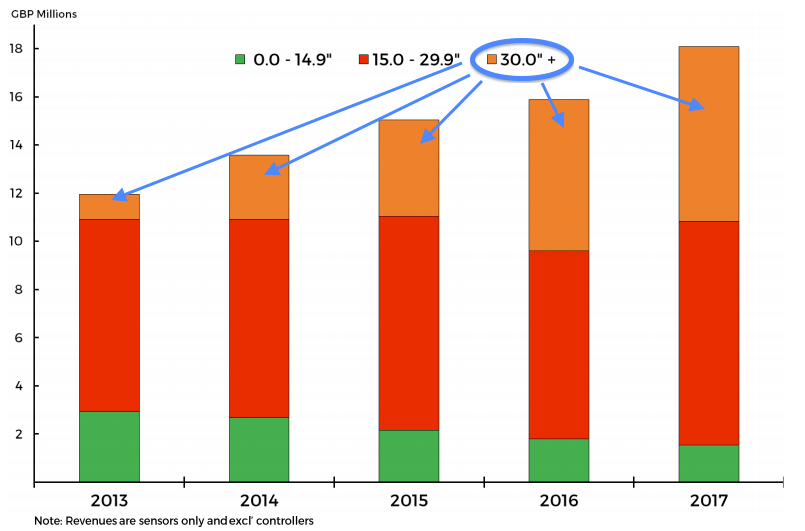 According to Zytronic, the firm’s patented touch technology is capable of detecting 40 or more fingers at once with “millisecond-fast response speeds”.

(For the boffins among you, these ‘multi-touch’ touchscreens work by a two-layer matrix of microscopic conductive cells that are laminated to the rear of the touch sensor. A small charge is applied to one layer, which in turn passes to the other. When a finger approaches the surface of a sensor, a change in the charge is induced and detected in the nodes immediately beneath the adjacent cells. The X-Y coordinate of this change is then calculated by a touch controller.)

Apparently, the route to success within this industry is to produce super-responsive touchscreens that can be made to any shape, and that can cope with bad weather, people wearing gloves and vandalism.

We can check SharePad’s News facility to understand the aforementioned 17% forecast earnings drop:

Sure enough, the latest trading update explains all:

“Trading in the second half of the year showed a 10% improvement in revenues over the first half, totalling £11.7m, resulting in total revenues for the year of £22.3m which is in-line with market expectations.”

“However, the increase in business required the introduction of some new designs and production techniques which have resulted in lower than expected margins, particularly in the final two months of the financial year.

“In addition, a spurious patent claim was settled for £72k, plus the Group’s own cost of £240k. Lower margins coupled with litigation costs have resulted in full year profits before tax of approximately £4.2m or £4.5m before the litigation costs, being behind market expectations.”

I have to say, extra sales causing extra costs is not the worst reason for a profit warning.

In fact, I am sure those extra costs will in time subside once the new production techniques become established.

And at least Zytronic is not losing sales!

Just so you know, Zytronic’s annual profit does have a habit of occasionally sliding. Note, too, that the share price follows suit…until profit bounces back: 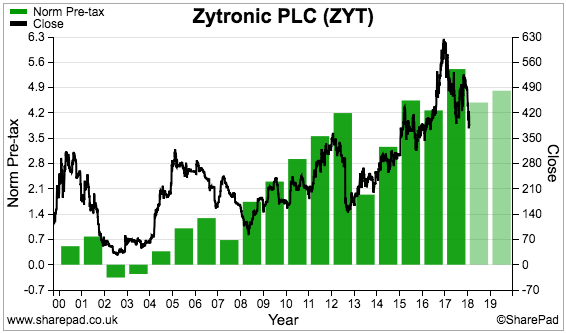 Assuming earnings can recover once again, the price chart does appear interesting. Certainly, the recent 400p looks better than the 630p peak!

Zytronic’s trading update also mentioned “a spurious patent claim” that was settled for £72k plus costs of £240k.

(I am not sure anything that costs £312k can ever be called “spurious”!)

I have wondered whether Zytronic’s settlement is connected to a patent infringement claim lodged a Mr Ronald Binstead.

You see, Mr Binstead posted the following message on several stock-market websites during the summer:

The trial of the proceedings, which were issued on 27 November 2017, is listed to take place in October 2019.”

“It is with considerable reluctance that I have taken this action against a company that I worked alongside for many years. However, BDL is an innovation led business that cannot afford to allow infringements to go unchecked, not only on its own part, but also in fairness to other licensees”.

I have contacted Mr Binstead for further comment, but have yet to receive a reply (perhaps for legal reasons). The scale of Zytronic’s alleged patent infringement would be useful to know.

Anyway, Mr Binstead started developing touchscreens back in the mid-1980s and had previously received licence payments from Zytronic for his designs. Mr Binstead’s website http://www.binsteaddesigns.com/ contains full details of his work. I understand the dispute centres on this patent https://patents.google.com/patent/WO1995027334A1/und

Respectable averages of 15% or so during the last ten years

Everything looks in order on SharePad’s Summary tab: 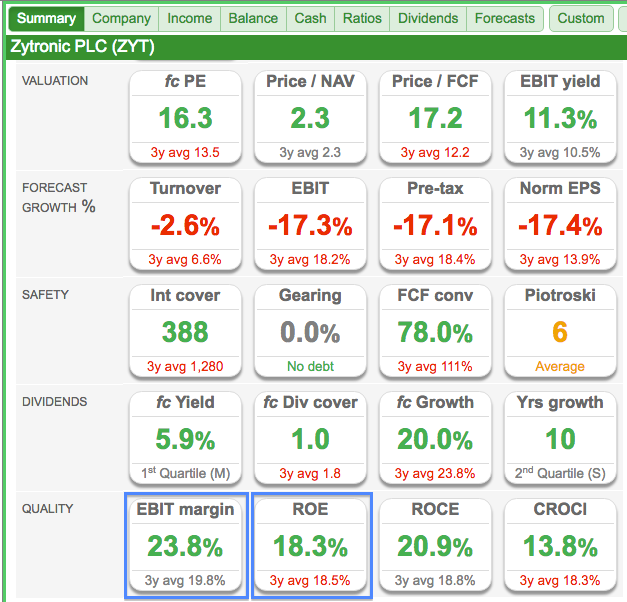 The bottom row shows a 23% EBIT (or operating) margin. Alas, this level of impressive profitability has not been recorded consistently: 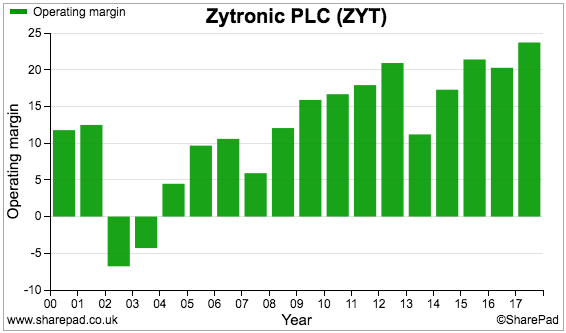 Still, a margin average of 15% or so during the last decade seems quite respectable in what no doubt is a fast-changing and competitive sector.

Displayed next to the EBIT margin on the Summary tab is an 18% return on equity figure. Not a truly outstanding result, but quite respectable nonetheless.

Zytronic’s history shows an average return on equity of about 15% during the last ten years: 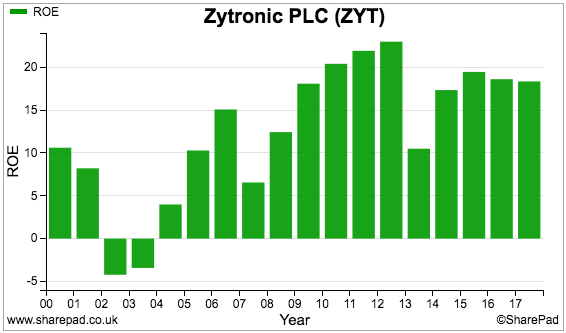 Moving on to cash flow, and once again I have used SharePad’s ace spreadsheet facility for assistance. I simply selected ‘Export data’ from the Sharing tab…

…and quickly made a few calculations for myself to judge how Zytronic has converted its reported profit into cash.

The numbers seem good to me.

Indeed, the totals for ‘change in working capital’ appear reassuringly modest given Zytronic is a relatively small company that serves larger customers.

Furthermore, I see aggregate capital expenditure has just about matched the associated depreciation and amortisation charged against reported earnings.

(Zytronic’s accounts do not fudge earnings by redirecting substantial development expenses onto the balance sheet.)

A bonus from my spreadsheet is the empty ‘Acquisitions’ line. Very commendably, Zytronic’s growth record has been achieved organically.

The result of the cash conversion has been a surging bank balance — now at £14m — and a complete repayment of borrowings:

Blessed with a mix of technological, accounting and sales skills

Similar to PayPoint the other week, Zytronic is another company where an impressive run of dividend growth has been overseen by a long-time chief exec:

Mark Cambridge took the top job during 2008 and the 2017 annual report reveals a number of favourable traits for discerning investors.

For a start, Mr Cambridge holds a Material Sciences degree, a corporate finance qualification and has previously headed Zytronic’s marketing efforts. In my experience, a boss with a good mix of technological, accounting and sales skills is quite rare.

Other remuneration plus-points include an annual bonus limit of only 20% of basic pay, and the current absence of any management options.

All told, I get the impression Zytronic employs a welcome ‘thin cat’ board that does its best to treat shareholders well.

The downside to the directors is their relatively small shareholdings:

However, I can live with those holdings given how Mr Cambridge has rewarded investors through the growing dividend.

A customer departure may hit earnings and the share price

One clear drawback to Zytronic is the group’s concentrated customer base.

The footnote below from the latest annual report…

…tells us 60% of sales were represented by just four customers. The concentration has increased during recent years, too:

I have invested in companies before that have been dependent on a few clients, and I can tell you from bitter experience that the departure of a large customer does no favours to earnings or the share price!

Still, Zytronic appears to have handled its customers well to date and the group argues that, once a client has a Zytronic touchscreen incorporated into a machine, replacing the touchscreen with an alternative is difficult without overhauling the rest of the machine as well.

Anyway, I will leave you to decide whether the narrow customer base — alongside the risks of adverse patent claims and general technological obsolesce — are enough to overshadow the impressive dividend record, decent financials and talented boss.

If it is any help, the following chart shows Zytronic’s P/E ratio heading towards the lower end of its historical range: 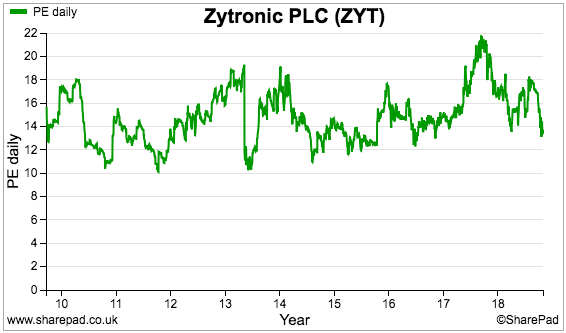 Remember, too, that 22% of Zytronic’s market cap is currently represented by that £14m in the bank.

Disclosure: Maynard does not own shares in Zytronic.