Screening for my next long-term winner: Ramsdens 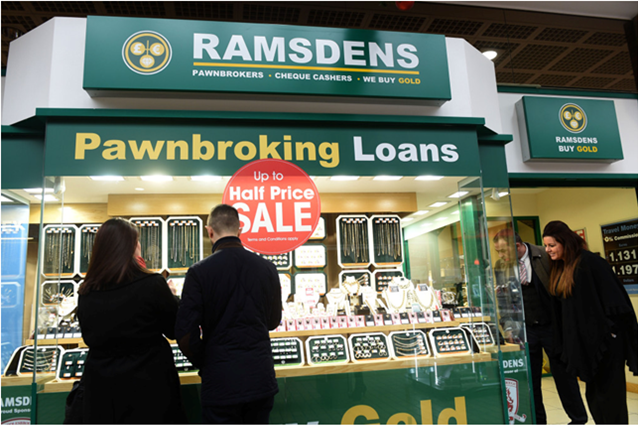 …and just few days ago, my SharePad set-up pinpointed Ramsdens (LSE: RFX) as a contender for my long-term portfolio.

Ramsdens is a small-cap that boasts cash-rich accounts, a seasoned chief exec, respectable prospects, and a rather modest valuation — a combination that can often bode well for thoughtful investors.

Let me explain how I first came across this share, and all the features that caught my attention.

Ramsdens flashed up on one of my regular SharePad filters:

The four search criteria I used were all rather straightforward. I wanted:

I like to think applying such criteria provides a possible short-cut to locating lower-risk opportunities — that is, short-listing companies that offer ordinary valuations, decent profitability, and sensible directors who manage their businesses with plenty of spare cash.

SharePad returned 50 companies to choose from, and Ramsdens stuck out because of its relatively small (£53m) market cap, single-digit P/E, and unfamiliar — and attractively dull! — company name.

A pawnbroker that once enjoyed bumper ‘cash-for-gold’ profits

A quick check of the SharePad five-year chart explains why I did not recognise the Ramsdens name — the starting date shows February 2017, indicating the company floated only last year: 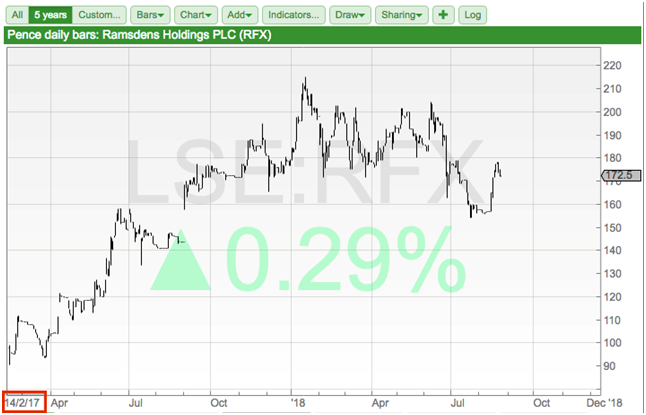 Then a skim of the SharePad summary table revealed no obvious financial concerns — and some respectable returns on equity, capital and similar: 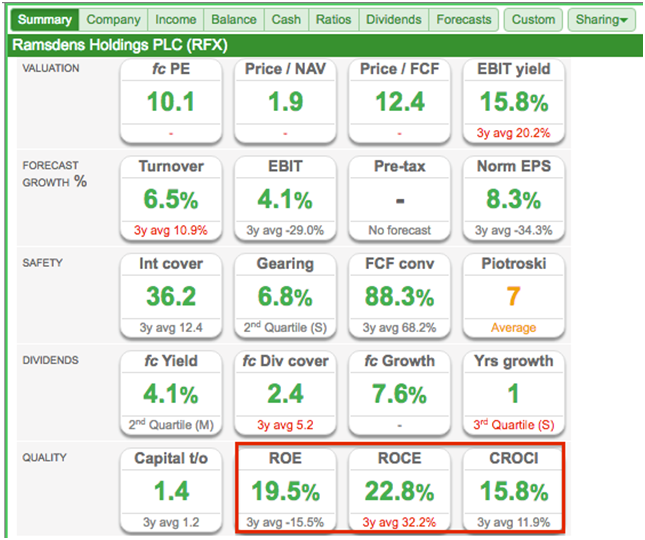 SharePad tells me what Ramsdens actually does — the business is a pawnbroker with a foreign-currency exchange service — and helpfully shows a divisional breakdown: 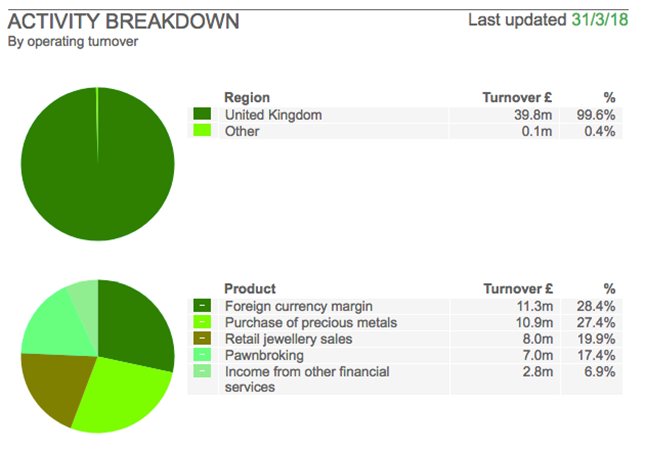 I am encouraged Ramsdens has reported good progress during the last few years. Operating profit has advanced from £1.7m to £6.4m between 2014 and 2018: 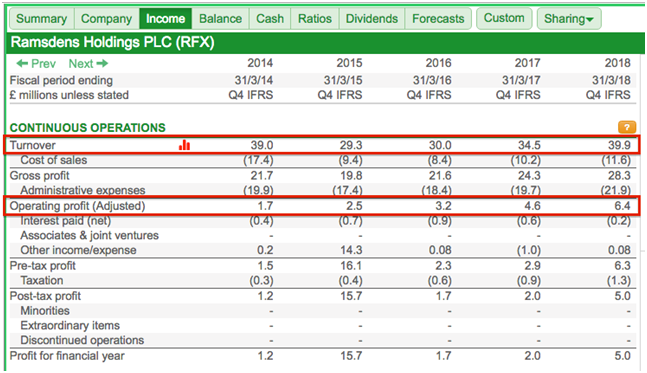 However, the group’s turnover does require further investigation. Why did revenue plunge by £10m during 2015… and is now only £1m greater than that reported for 2014?

The AIM admission document gives this clue (my bold):

“Ramsdens grew significantly between 2009 and 2013, investing heavily in the Ramsdens brand, its core service lines and store estate. Following a change in market conditions, including a material fall in the gold price, the management team reacted decisively to focus on cash generation from the existing store estate.”

Annual reports at Companies House reveal Ramsdens had enjoyed bumper results when the gold price climbed strongly and ‘cash-for-gold’ transactions increased substantially. In fact, revenue of £50m-plus translated into a £9m operating profit during 2011 and 2012.

“In 2014, a management buyout facilitated an exit of the previous major shareholders of Ramsdens and provided the funding that enabled the Group to repay its existing bank debt and management to update its strategy.”

…and a strategic re-jig to diversify away from profiting from scrap gold:

“Since the MBO, the Group’s strategy has focused on growing profits from the existing store estate through investment in the foreign currency exchange and jewellery retail segments, acquiring pawnbroking loan books and optimising cash generation with the ultimate aim of creating a well balanced, resilient business from which to generate further growth, both organically and by acquisition.”

My spreadsheet below shows how the foreign-currency exchange service has become the firm’s largest source of revenue and gross profit: 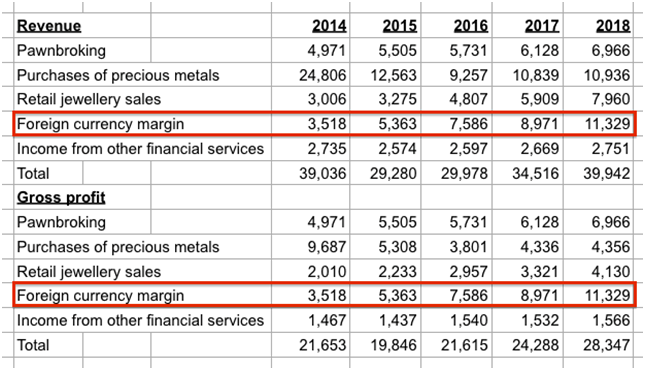 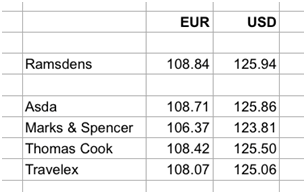 I should add that if you are tempted to visit a Ramsdens store to convert your money — or indeed to pawn your old gold — then you may be geographically challenged. Most of the group’s 132 outlets are located in either northern England, south Wales or the central belt of Scotland.

I understand Ramsdens’s currency services are used mostly for holiday money, and the company’s first-half/second-half split does reveal significant seasonality.

During 2018 for example, £5.2m of the £6.4m full-year operating profit was produced within the first half (covering March to September). 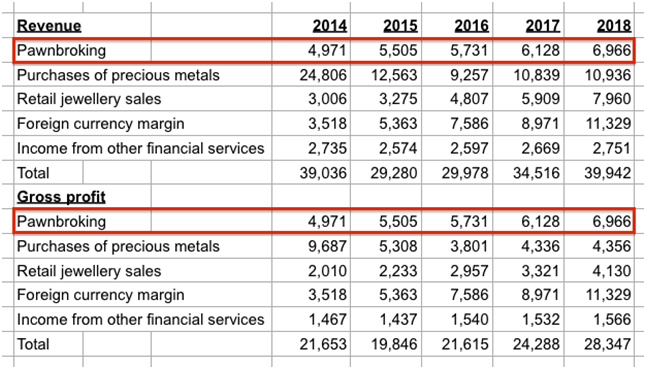 Just so you know, last year’s pawnbroking income of £7.0m was produced from an average £6.2m pawnbroking loan book — which suggests Ramsdens earned an £0.8m, or 12%, return from the items pledged.

Some 34,000* pledges were accepted, with an average loan value of £218 and a typical duration of five months.

(*My sums indicate 34,000 pledges equates to only one pledge every working day for each of the 132 stores — no wonder the business had to find additional income sources after the ‘cash-for-gold’ profits dried up!)

Jewellery sales have done well, too, in part due to selling watches online.

I am not too concerned about Ramsdens’s balance sheet.

The largest assets are cash and trade debtors (amounts owed by pawnbroking customers), while there is relatively little in the way of tangible fixed assets (mostly store leases and fixtures): 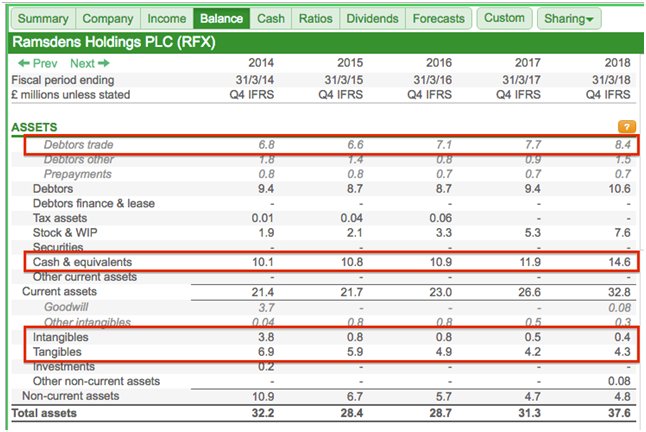 Turning to liabilities now, borrowings and trade creditors are respectively outweighed by the earlier cash and trade debtor entries. There are no pension complications either: 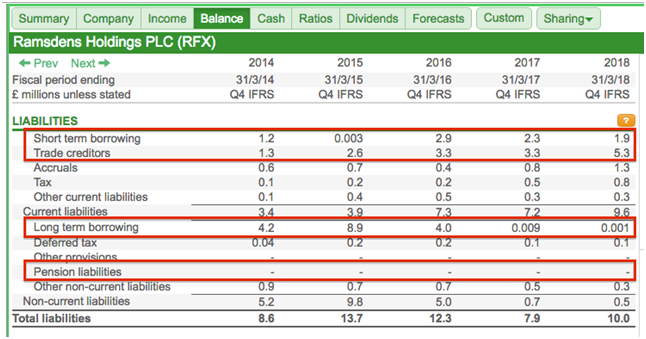 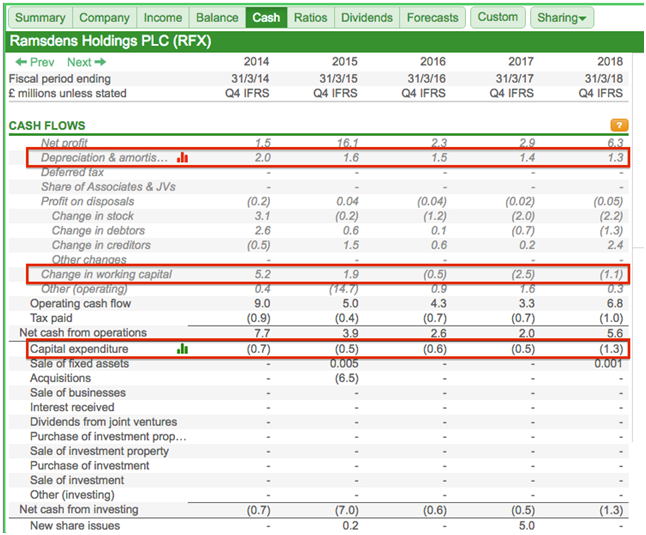 Aggregate capital expenditure of £3.6m during the last five years has been covered amply by the total £7.8m depreciation and amortisation charged against reported earnings:

Meanwhile, the changes in working capital do not appear obviously worrying, given the group’s recent level of profit and aforementioned expansion.

I am hopeful his retirement is not imminent

Current chief executive Peter Kenyon certainly appears loyal to Ramsdens — he joined in 2001, took the top job during 2008 and led that MBO in 2014.

Mr Kenyon turned 53 earlier this year and — given management stability can be vital at smaller companies — I am hopeful his retirement is not imminent.

Mind you, Mr Kenyon has recently sold a chunk of shares: 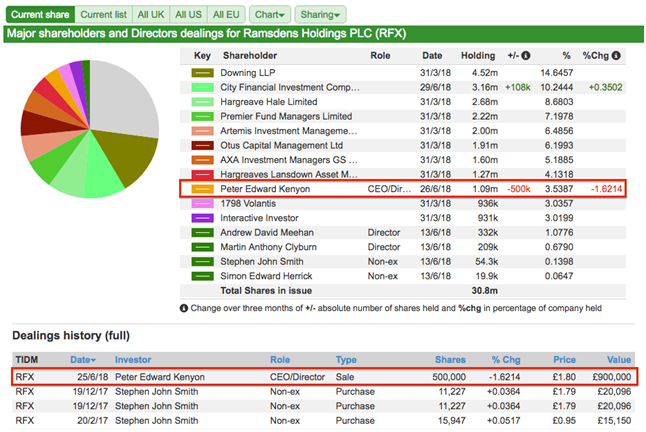 Mr Kenyon’s remaining stake is worth almost £2m, which I trust can ensure he remains aligned with ordinary investors.

Still, Mr Kenyon’s present wage is a not insignificant £193k, and I dare say further share sales could relegate him to my ‘executive salaryman’ category — the members of which tend not to look after ordinary investors so well (at least in my experience).

I should add that almost 3% of the company looks on course to be handed to Mr Kenyon and other managers after the 2020 targets of an LTIP (Long Term Incentive Plan) were reached during 2018.

Ramsdens’s 2018 results were published in June and showed operating profit up 60% and “significantly ahead of the board’s initial expectations for the year”.

The statement also carried some positive management remarks about the current year (my bold):

“The FY19 financial year has started well and in line with the Board’s expectations.

The macroeconomic environment remains uncertain and the short to medium term headwinds facing UK retailers have been well documented. The overall weakness of sterling continues to benefit the sterling gold price which in turn supports both our pawnbroking and precious metal buying segments.

The Group will continue to execute its clear growth strategy and expand our presence through new store openings whilst also appraising attractive acquisition and consolidation opportunities.

Customer demand for our products across our key business segments remains strong. We have a diversified business, strong asset base, a loyal and growing customer base, a committed team and a strong brand. These qualities give us confidence to successfully deliver on the Board’s clear growth strategy and make further progress in the year ahead.”

To put the expansion opportunities into perspective, Ramsdens currently operates from 132 outlets and says it is “committed to approximately 12 store openings per annum over the medium term”.

City brokers predict earnings and the dividend could advance by between 7% and 10% during the next two years: 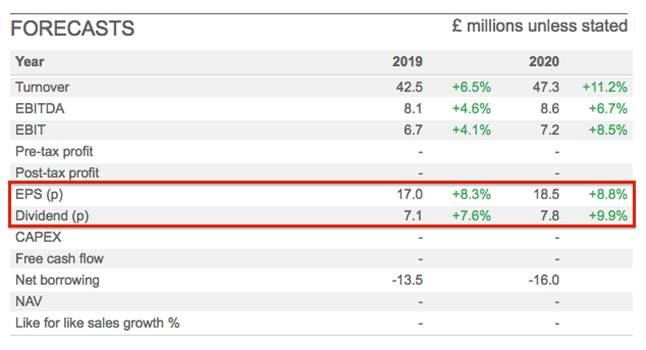 At 172p, the shares therefore trade on a near-term P/E of approximately 10…and that is before considering the trailing net cash position of almost £13m or 41p per share.

Take the cash into account, and you could argue the underlying P/E is less than 8.

That said, I do wonder whether part of the £13m cash position is required to meet regulatory requirements and therefore can’t really be deemed to be ‘surplus’ money.

Still, a forecast 4.1% dividend yield supports the notion the shares are not exactly expensive.

The shares have already doubled following the flotation

I have to confess, pawnbroking has never really struck me as an obviously great sector for buy-and-hold investors.

True, Ramsdens has been going since 1987 and the last few years do show a promising track record. But the firm’s progress before that did involve some major ups and downs with the gold price.

The bright spot for me is the particularly impressive development of the group’s currency service.

Indeed, I can foresee the currency service becoming a much greater contributor to group earnings within the next few years — and the economics of the overall business could in turn become more attractive and predictable.

(I mean, converting pound notes into euros for a small commission does appear a simpler way of making money than evaluating jewellery and lending (and collecting!) cash at 12% interest.)

I also like how vast numbers of expensive staff have not been needed for success. Each store requires an average of only four employees, while the average company wage is just £20k.

Buoyed by the healthy 2018 results, the shares have already climbed from their 87p flotation price to 172p. But could the shares outperform from here for longer-term investors?

Well, I feel there is some potential — assuming the loyal chief exec remains in charge and continues to develop the business in the same, steady manner. The substantial cash position and modest valuation ought to provide room for error too.

The obvious drawback is the lack of consistently attractive financial ratios.

For instance, the 16% operating margin that placed Ramsdens on my original screening short-list has been achieved only in 2018:

Returns on equity, capital and similar ratios have been haphazard as well:

As such, shareholders hoping for longer-term gains must hope Ramsdens can sustain itself as an above-average business…

…as well as withstand the economic, operational, regulatory and/or gold price mishaps the group has still to encounter as a quoted company.

Disclosure: Maynard does not own shares in Ramsdens.