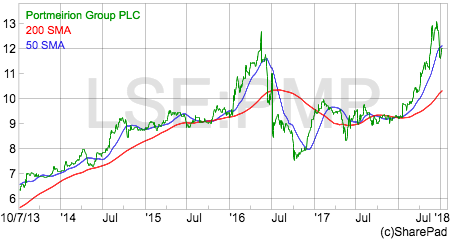 Portmeirion Group is based in Stoke on Trent and is a leading maker of homeware products such as tableware, cookware, placemats, candles and fragrances. It trades under some well-known brand names such as Portmeirion, Royal Worcester, Pimpernel, Spode and Wax Lyrical.

Around half its products are manufactured at its own site in Stoke on Trent with the other half bought in from third party suppliers. The UK, USA and South Korea are its main markets accounting for just over 70% of its total sales. The business is also highly seasonal with the bulk of its profits being made in the second half of its financial year as its products are often bought as Christmas gifts.

The company has a good track record of growing sales – sometime by buying other companies – but has been less successful at increasing profits. Since 2012, sales have grown by nearly £30m but pre-tax profits have only increased by £2m. Despite this, Portmeirion shares have performed very well since the second half of 2016 but have given longer-term shareholders more of a bumpy ride.

Despite this profits growth issue, the company has been able to generate some very good returns on capital employed (ROCE) and decent operating margins. 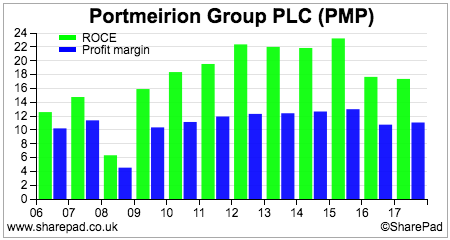 A high ROCE is a highly sought after by many investors. That said, it is important to look at the trends in ROCE and get behind the number and find out what’s been going on in a business that has produced it.

Note that Portmeirion’s ROCE and profit margins show a sharp reduction in 2008 which suggest that profits could be cyclical and can fall quite sharply during times of economic recessions. This would be a key area of further research if I was looking to invest in this business.

At the moment, things are going well for the company. Sales and profits hit record highs in 2017 but can the good times continue? The problem with a business like this is that investors often fail to understand how a company’s profits react to changing trading conditions. Instead, they can mistakenly extrapolate the most recent healthy trading performance into the future and buy shares at the wrong time and the wrong price.

I can understand why some investors would find Portmeirion an attractive business to invest in. Its products are fairly easy to understand and the business is very profitable. I am going to look at what I see as some of the key issues with this company to try and work out if its shares are attractive or not at the current share price.

Is there genuine underlying sales and profits growth?

Based on recent evidence, underlying sales should keep on growing modestly. The company seems to be good at keeping its patterns on its core tableware products fresh as well as improving and expanding product ranges.

The acquisition of Wax Lyrical and the ability to use its existing brands to sell more fragrances products seems to be working out well. As most of the company’s sales are made outside the UK, the recent weakness of the pound should be helpful to overseas profits, particularly in the USA where it has a significant business.

The sales of the tableware business remain underpinned by the strength of the Portemeirion Botanic Garden pattern which contributes £30m of sales per year (35% of total sales) and has over 50 million pieces in use across the world.

2017 saw a big increase in export sales outside the company’s three main markets which bodes well for growing new markets for its products.

My main concern with Portmeirion is the profitability of its UK manufacturing sites. If I strip out the profit contribution of Wax Lyrical in 2016 and 2017 it seems that all is not well here.

The calculation of the underlying profits for the rest of the business is shown in the table below.

If my estimate of Wax Lyrical’s 2017 profit is reasonably accurate then the profits in the rest of the business whilst higher than they were in 2016 are still significantly lower than profits made in 2015.

2016 was a bad year for Portmeirion. Despite the extra sales and profits that came from buying candles and fragrances business Wax Lyrical in May 2016, the underlying business saw a sharp fall in profits. This was due to a sharp fall in sales in the South Korean business after a strong 2015 and a collapse in sales in India. Both these markets are supplied from the UK and the fall in sales fed through to sharply lower profits due to a negative operational gearing effect.

2017, saw an improvement but there still seems to be a lot of work to do to get profits back to where they were in 2015.

How significant is the operational gearing in this business?

Operational gearing explains how profits can change at a greater rate than the change in sales. Portmeirion has high operational gearing due to the high fixed costs of its manufacturing plant in the UK. This introduces significant risks for shareholders if sales fall.

One of the ways you can try and get a feel for the operational gearing in a business is to simply get some data on sales and profits and then calculate the simple changes. I’ve done this for Portmeirion below excluding the contribution from the Wax Lyrical fragrance business.

What you can hopefully see is that when sales are growing profits tend to grow at a faster rate and margins increase. If you divide the change in operating profits by the change in sales you can calculate the incremental profit margin on those additional sales. As long as the incremental margin is higher than the previous year’s operating margin, profit margins for the business will increase.

To prosper, Portmeirion’s manufacturing plants need to be kept busy and well loaded with work. A decline in demand for its products and a fall in production can wreak havoc with its profitability.

Portmeirion is trying to reduce this risk by making its business more efficient. In recent years it has installed a new kiln at its Stoke on Trent site which is more energy and labour efficient than its previous one. This has increased its production capacity from 130,000 pieces per week to 170,000 and with a bit of extra work it could go as high as 250,000. If orders and sales pick up then the management believe that it could result in a material uplift in profitability.

This did not happen in 2017 as production fell slightly. However, production levels picked up during the second half of 2017 and into the start of 2018 which bodes well for profits this year. 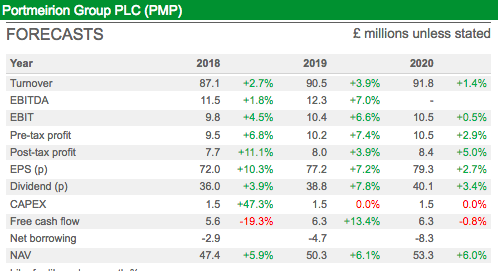 Looking at current analysts’ forecasts, it seems that some modest sales growth is expected to feed through into margin improvements for the next three years.

Portmeirion’s finances are in pretty good shape. It has a modest net cash position and a very small pension fund deficit. In recent years, cash conversion has been reasonable and is expected to remain so which means that dividends should be able to keep on increasing. 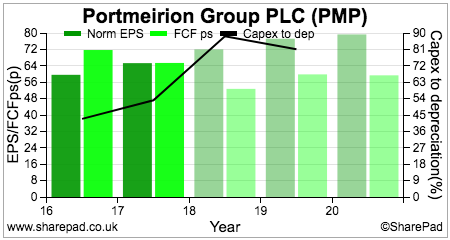 Working capital does have to be watched. As with all manufacturing businesses rising stock levels can be a red flag that demand is faltering or that profits may be overstated by capitalising overheads in stock. Portmeirion’s decent cash conversion and stock to turnover ratio – which is holding steady – suggests that this is not something to worry about at the moment. 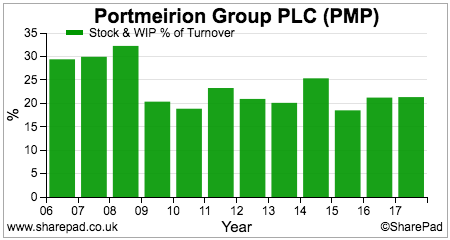 Are the shares attractively valued?

I think Portmeirion is a decent business. It has some very good brands and seems to be well managed. My concern is that the profitability of its core business has not made much progress and remains vulnerable to a downturn in demand. The Wax Lyrical acquisition looks to have been a good one and this should provide it with a reasonable source of growth.

That said, the shares have been significantly rerated upwards over the last year. This time last year, the shares were trading on a one-year forecast PE of 13.8 times. Today the multiple is 16.7 times (16.1 times on a one year rolling basis) but the profit forecasts for 2018 and 2019 are essentially the same as they were a year ago.

In the absence of forecast upgrades the shares may be high enough.