Disclosure: At the time of writing I own shares in InterContinental Hotels. 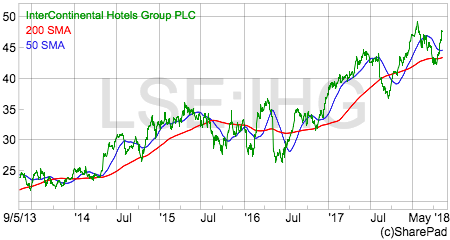 InterContinental Hotels (IHG) can trace its roots back to the Bass brewing company. Bass, long known for its ales set about turning itself into a leisure conglomerate with pubs, Gala Bingo, Coral bookmakers and hotels.

In 2000, the company sold its brewing business and then went about splitting itself up. The pubs business became Mitchells & Butlers (LSE:MAB) with the hotels business being named Six Continents and then later changed to InterContinental Hotels.

IHG is one of the world’s biggest hotel companies. It currently has 5,367 hotels in its system and nearly 800,000 rooms with plans for a lot more in the future.

The business is dominated by four main brands:

The company also has other hotel brands aimed at niche areas of the market such as:

Most of IHG’s hotels and rooms are located in the Americas. There are sizeable businesses also in Europe, Asia and the Middle East and Greater China.

Three quarters of the company’s operating profits come from the Americas.

In recent years, IHG has moved away from owning hotels to concentrate on franchising and managing them. The franchise model is used in mature markets such as the USA and Europe where over 90% of IHG’s hotels are franchised. In developing markets such as Greater China, most of the hotels are managed by IHG. In 2017, 96% of IHG’s operating profits come from franchise or management fees.

The decision to pursue a fee-based business model has been a deliberate one. Owning hotels outright is very asset intensive and incurs substantial property and running costs. Managed and franchised hotels allow IHG to grow much faster as it does not need to buy hotels. Instead, existing hotels owners are signed up as franchisees and integrated into IHG’s worldwide network. This means that IHG does not need to invest a lot of extra capital in order to grow.

IHG’s franchise fees are based on the following formula:

Hotel owners also pay into a system fund to pay for marketing and the costs of running IHG’s global reservation system.

REVPAR stands for revenue per available room. It is calculated by multiplying the room rate by its occupancy rate (the amount of time it is booked throughout the year) and is a key measure of how well a hotel business is performing.

For example, if a room in a hotel costs $100 per night and that room is booked for 80% of the year, the REVPAR will be $80 ($100 x 80%). There is a trade-off between how much a hotel costs – its room rate – and how full it is – occupancy rate. The aim of the hotel operator is to optimise this trade off and maximise its REVPAR. We’ll take a closer look at IHG’s REVPAR performance shortly.

For IHG’s managed hotels, its fees are based on the following formula:

The hotel market tends to be cyclical. Its fortunes tend to move in step with the general economy. Corporate profitability has a big influence on the demand for hotel accommodation. It is high when business is good but tends to be a big focus of cost reduction when business conditions get tougher.

That said, there are also some long-term positive drivers of hotel demand such as the growth of low cost air travel and a growing middle class in emerging economies.

Let’s take a closer look at how IHG has been performing in recent years. 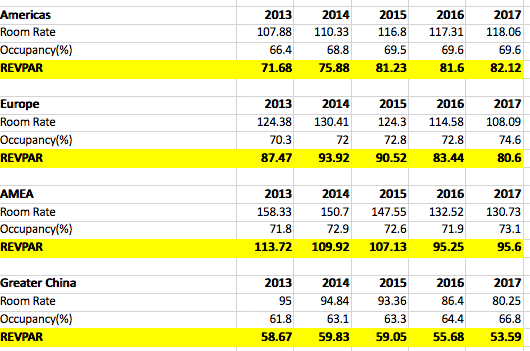 One extremely important point to note when looking at the performance of IHG is that it reports its results in US dollars. This does not tend to cause problems when analysing the performance of the Americas division but fluctuations in the US dollar exchange rate make interpretation of other areas more difficult.

What we can see is that the core Americas business has been ticking along quite nicely. The room rate and occupancy rate have increased since 2013 which have fed through to decent growth in the all-important REVPAR number which determines the fee income that IHG is reliant on.

However, if we look elsewhere across IHG’s business it seems at first glance that all is not as well as it could be. Occupancy rates are increasing but room rates and REVPAR are falling when expressed in US dollars.

Thankfully, IHG gives investors the information they need by stripping out the effects of exchange rates. On the basis of constant US dollars, the company’s performance has been reasonably good. Room rate growth in China turned positive in 2017, which fed through to a healthy increase in REVPAR. Europe was also very strong in 2017. 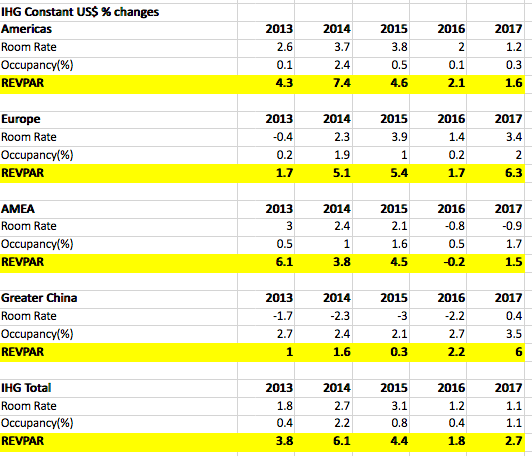 Group REVPAR growth picked up in 2017 and has continued to do so during the first quarter of 2018.

The backdrop of underlying REVPAR growth and the growth in the number of rooms seen in recent years has fed through to improved levels of profitability for IHG.

IHG is a very profitable business with high profit margins. However, what you can hopefully see from the table above is how the different type of hotel business models have different levels of profitability.

Profits are stated before central overheads. What we can see here is how fantastically profitable franchised and managed hotels are compared with owning and leasing them. The fee income from franchisees and management contracts has much lower costs expensed against them than owning and operating a hotel outright. This translates into very high profit margins.

One of the key things I check for when researching a business is how resilient it is to a recession. I like businesses that can withstand recessions well as this tends to enhance long term returns from owning shares in them.

Hotels do suffer in recessions. The 2008-09 recession was one of the deepest in living memory and saw hotel room rates, occupancies and profitability take a battering. However, the extent of that battering depended on what kind of hotel business model was in use.

IHG’s owned and leased profits fell by 42.6% between 2008 and 2009. Managed hotel profits fell by 66% – but bounced back very quickly in 2010 – and franchised fell by 16%. However, note that the franchised profit margin did not fall by much at all due to the lack of operational gearing (due to very little costs) in the business.

Overall operating profits fell by a third. That’s the kind of scenario that would usually put me off investing in a company like IHG. But I think the makeup of the business is a lot more favourable now – and less risky – than it was a decade ago.

Back then, owned and leased hotels accounted for 15% of operating profits (before central overheads) compared with just 3% now as most of these hotels have been sold. Franchised hotels have seen their share of profits increase from 61% to 71%.

In my opinion, this has made the business more resilient to possible big falls in profits in a recession but it has also improved the quality of profits and been responsible for a significant increase in operating margins.

In 2008 IHG’s operating profit margin was 28.9%. In 2017, it was 42.5%. The fee-based income stream from managed and franchised hotels has become more and more profitable. You can see this if you take the profits from franchised and managed hotels and then deduct all the central overheads and then divide it by the revenues from those hotels to get the fee margin.

At the top of the last hotel cycle in 2008, IHG’s fee margin was 37.9%. It is now 50.1%. IHG is planning to increase this further by making its business more efficient. 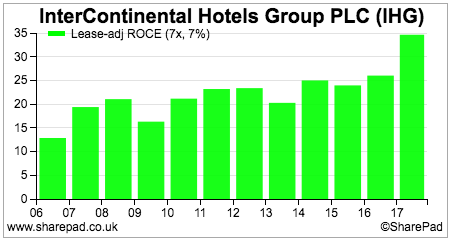 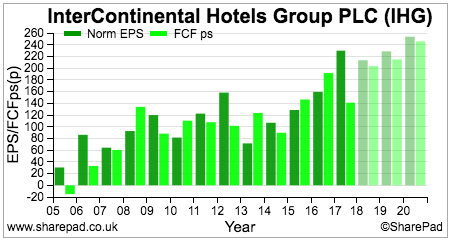 But can IHG keep the good times rolling? 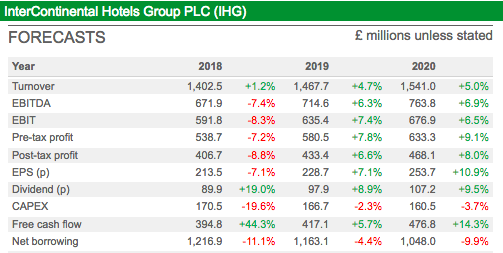 2018 has started well for IHG with first quarter REVPAR up by 3.5% at constant exchange rate (6.5% at actual exchange rates due to the weaker US dollar) and net rooms growth up by 4.3% year on year. 19,727 new rooms have been added to its pipeline. This is the highest rate for 11 years and puts IHG on track to deliver industry leading net room growth over the next few years.

Of the 252,451 rooms in the pipeline, 45% are already under construction. The company’s new mainstream brand, avid, has seen a very strong sign up amongst franchisees. In March, IHG took a 51% stake on Regent Hotels to meet its aim of having more of a presence in the luxury market.

The weaker dollar had expected to lead to a lower level of profits when converted back into pounds in 2018 but recent dollar strength and better than expected REVPAR performance may see analysts revise their forecasts upwards in the coming months. 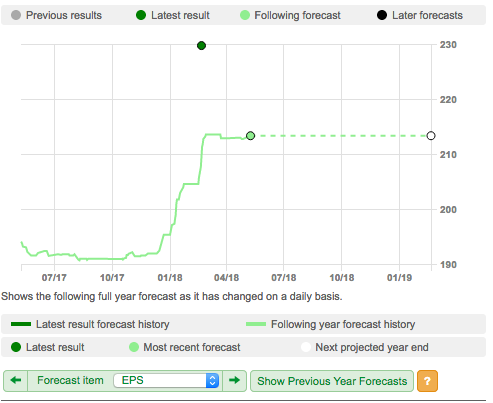 IHG is clearly in good health now. The key risk I see to the business – apart from a recession – is an excessive increase in the industry supply of new hotel rooms which could put pressure on selling prices and REVPAR.

This doesn’t seem to be happening at the moment. In the US market, demand for hotel rooms has been growing faster than the economy in general since 2010 but the supply of new rooms has been quite constrained and helped to push up REVPAR. A similar market backdrop has been seen in Europe.

Growth from the US market should be quite modest going forward for IHG. US hotel occupancies in 2017 were at an all-time high. REVPAR growth in the future is therefore going to have to come from increases in room rates. Profit growth will also need more rooms which IHG is planning to add.

The good news is that the Chinese market seems to be coming good for IHG. Room rates increased in 2017 after years of new supply pushed down prices. 2018 is off to a great start with REVPAR up by 11% in the first quarter of the year.

The actions of IHG’s competitors needs to be watched closely. Marriott is buying up rivals, but Hilton is launching new brands. Accor is diversifying into travel activities. At the moment, it seems as if the industry demand and supply balance remains favourable.

Most global branded hotel operators come with expensive valuations for their shares at the moment. IHG is no exception. That said, it is a very high quality and dependable business with superb financial ratios. These kinds of businesses are scarce and should command high valuations in my opinion.

IHG is not going to be a share that will help you get rich quick and certainly won’t attract bargain hunters but it has the kind of characteristics that may suit long-term patient investors.